As a parent of two young children, safe gun storage isn’t optional, it’s a necessity. My guns, if not on me, have to be stowed in a manner in which my kids cannot operate them. In years past, gun owners have been relegated to some version of a safe or gun lock to achieve this result. Whether with a rapid access gun safe or a keyed or combo slide or trigger lock, efficient access has commonly been the trade-off for safety.

Enter the ZORE-X. Developed by members of the Israeli Special Forces, the ZORE-X looks to close the gap between safe and accessible. I first happened upon the ZORE-X at the gun industry’s SHOT Show held in Las Vegas in January 2018. It was at that time the guys of ZORE showed me their nifty creation.

Here we are a few months later and I finally have my hands on the ZORE-X. I’ve spent some time with, put it through its paces and challenged my kids to access my unloaded Glock 19 for an ultimate showdown of will. So how did the ZORE-X do?

The ZORE-X ships in a little black box with no other markings than its name and caliber – 9×19 — on the front. Once opened, users set eyes on a helpful quick start and full user’s manual alongside the actual ZORE-X device. It looks harmless enough, decked out in a matte black finish. The unit is comprised of a handful of parts, which the company details in both manuals. Why am I pointing this out? It’s useful down the road, trust me.

The ZORE-X is comprised of a battery, unlocking dial, locking button, locking unit and sleeve. The sleeve fits over the locking unit, protecting it when not in use in addition to allowing users to practice with the device prior to shoving it in a gun barrel. The locking button, spoiler alert, is what locks the firearm down preventing the slide from moving and the trigger from being depressed while the unlocking dial does the obvious job of locking and unlocking the ZORE-X. 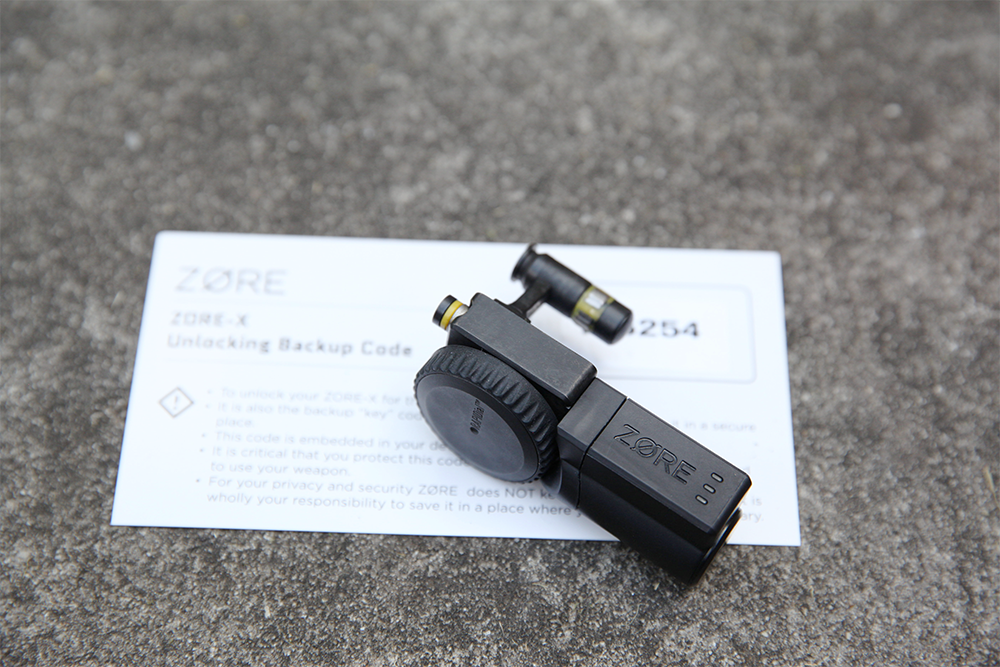 Each ZORE-X unit comes with a card that features a code personalized to that unit to be used as a back-up. (Photo: Jacki Billings/Guns.com) 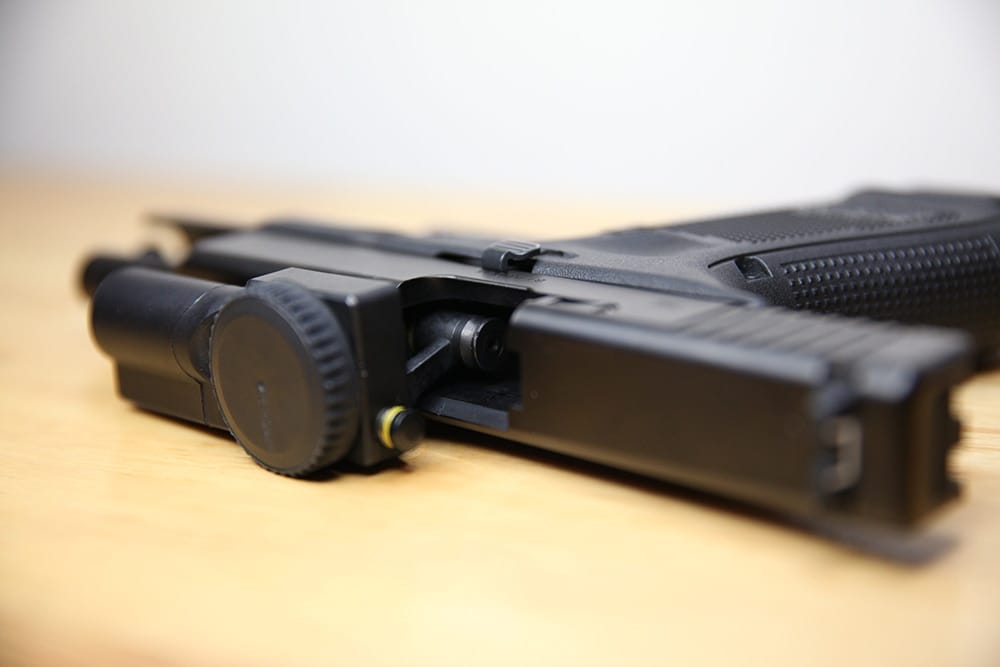 The locking unit of the ZORE-X fits into the chamber of the gun. (Photo: Jacki Billings/Guns.com)

How exactly do all these parts come together to create a locked firearm? First step is locking the slide to the rear, removing the magazine and clearing the firearm. With the gun completely unloaded and slide still locked to the rear, the locking unit portion of the ZORE-X is inserted into the chamber of the handgun. Users then release the slide, letting it fall into the forward position. At this point, if all goes well, the extractor fits neatly into the extractor groove of the lock. From here, users input the code on the unlock dial that serves as the means to both unlock and lock the device. Pressing in on the dial after the code has been entered for about two seconds finishes the process and the gun is now officially unable to be used. Though the chamber is currently occupied with the locking device, a full magazine can be inserted though no round can be chambered while the gun is in the locked position.

To unlock, simply input the code at any speed and rack the gun. The lock goes flying and a round is chambered. To see the ZORE in action check out their YouTube video.

Set-up takes a little time, or at least it did for me. Admittedly, some of this is my fault because I’m the kind of person that jumps head first into a project without always thoroughly reading the manual. In the case of the ZORE-X, manual reading is required. After a few minutes of struggling to seat the device in my Glock 19, I realized that “duh” the sleeve needed to be removed. In order to do that, the code has to be input.

The ZORE-X ships with a handy card for first time and back-up use. The card sports an individualized code that will always work for the ZORE-X. The code is different based on device and I tested that by trying the first ZORE-X’s code out on the second one the company sent me. Didn’t work. I highly suggest inputting your own personalized code as the one that ships with the ZORE-X is long and difficult to remember. The manual clearly illustrates how to set-up your own code. For the sake of this review I opted for a quick 1, 2, 3, 4, 5 combo. 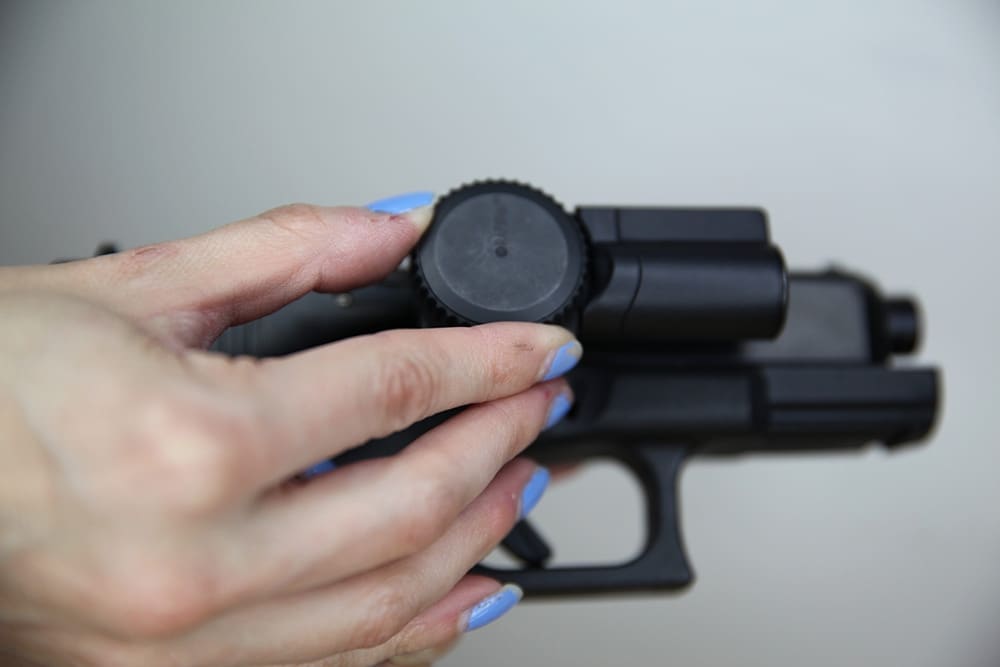 The code is input by turning the dial on the device. (Photo: Jacki Billings/Guns.com) 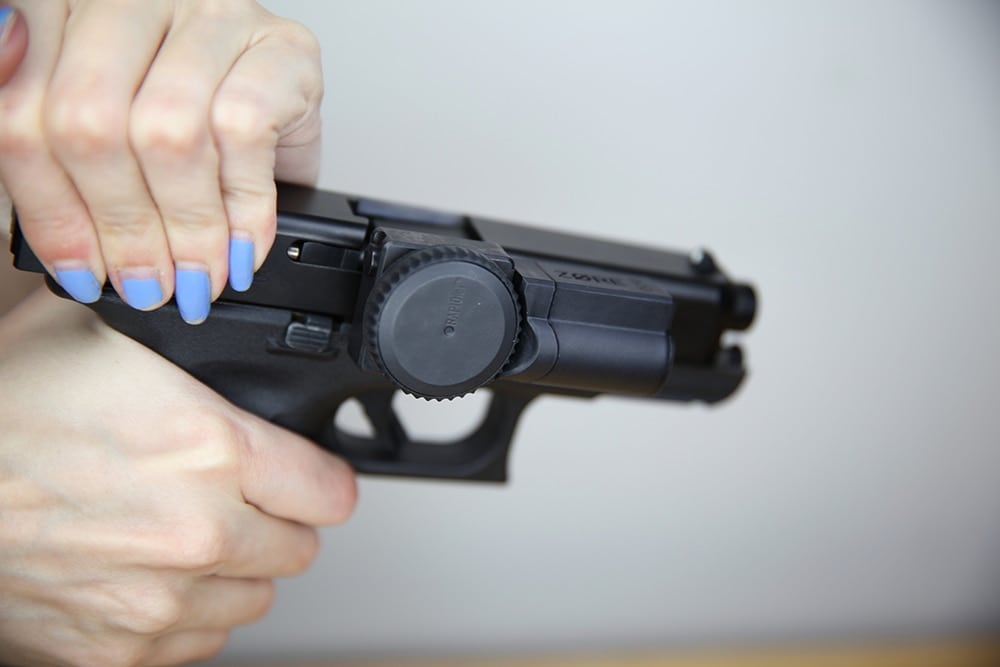 Once the code has been input and accepted, the slide cannot be manipulated. (Photo: Jacki Billings/Guns.com)

The unlock dial is simple in construction. You simply turn it right or left as tactile clicks alert you to each turn. The dial can be started in any direction. First time I went 1 right, 2 left, 3 right and so on. Second time around I went the opposite way heading left one click. Both yielded an unlocked ZORE-X.

With the device unlocked, I was able to remove the sleeve and voila! The locking unit fit neatly into the chamber of the Glock. A word of caution – not every pistol is compatible with the ZORE-X so it’s essential to peruse the list of compatible firearms on the company’s website to ensure no problems arise. I placed the ZORE-X into the Glock’s chamber, let the slide down, input my code and lo and behold the gun was locked.

The ZORE-X sounds like something you’d easily roll your eyes at and write off as yet another piece of gimmicky gun gear. Time spent with the inconspicuous device tells another story.

The ZORE-X is convenient in the sense that I didn’t have to contend with a bulky safe on my nightstand or keeping track of RFID/regular keys to access my gun. Having the ability to take my nightstand gun and stage it out in the open is another perk.

Set-up takes a bit of time, especially if you struggle with technology. Also, it took me awhile to get the feel down for the tactile nature of the dial. In the beginning, I frequently slipped and over-rotated it two turns instead of one. Some practice and it becomes more second nature. Also, did I mention practice? Yeah, you’re going to want to set some time aside to really work on both memorization of your code (if you’re forgetful like me) and the mechanics of the ZORE-X. Ultimately, I suggest getting to the proficiency level of being able to maneuver it without looking and without having to think about your rotations. Not a task you’re going to master in just a few minutes. 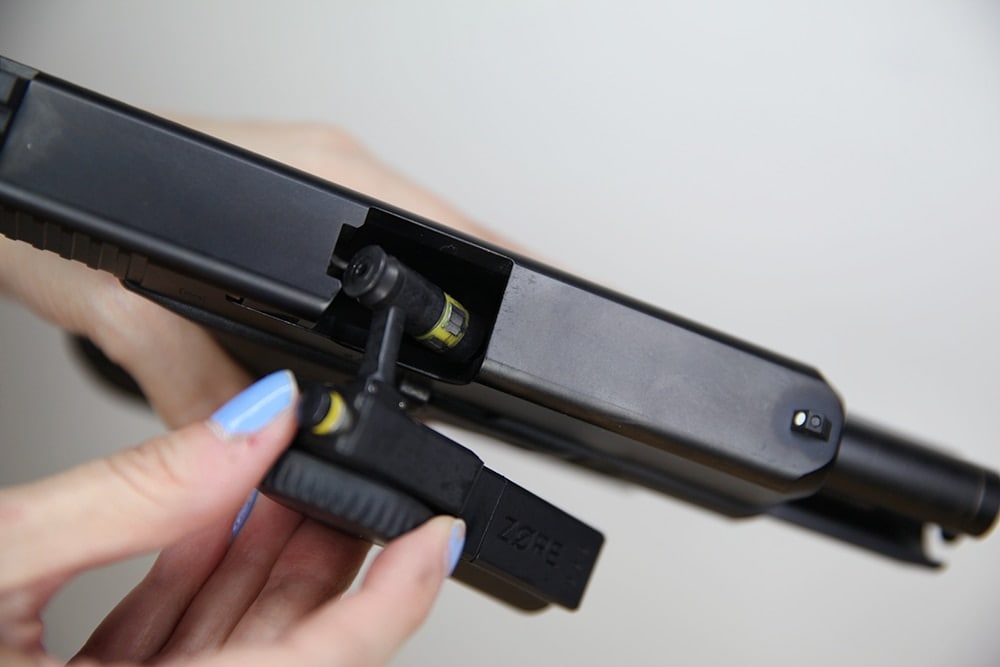 The ZORE-X can be placed directly into the gun’s chamber. (Photo: Jacki Billings/Guns.com) 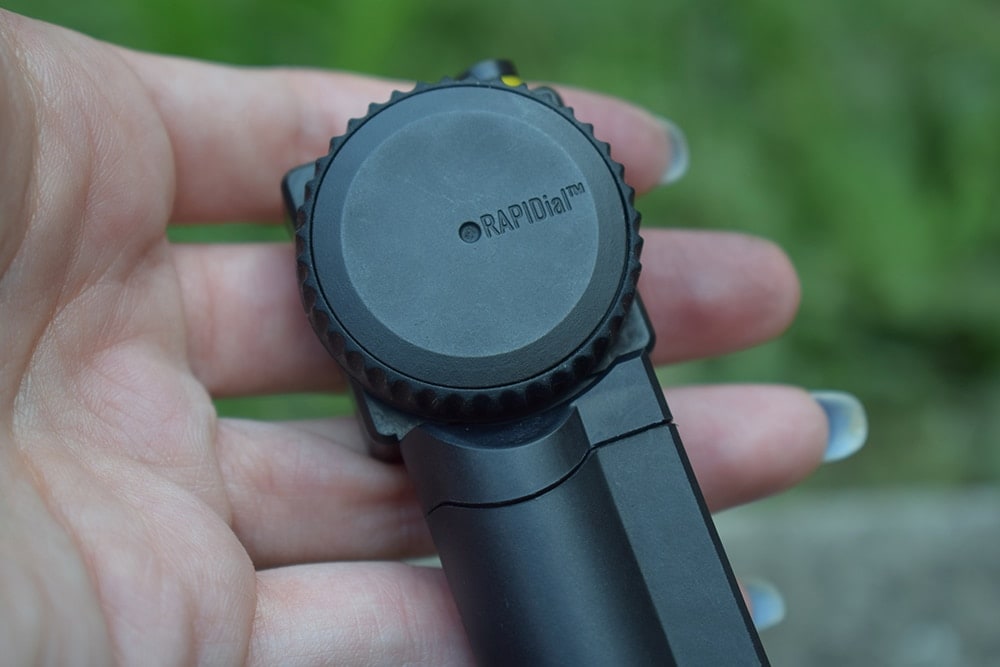 Even tiny and crafty kid hands were no match for the ZORE-X. (Photo: Jacki Billings/Guns.com)

Therein lies the downside to the ZORE-X. It’s not your typical gun lock that you can pop on immediately after purchasing. Time has to be dedicated towards the device to use it to its full potential. While that is a con to the overall design, but once you master it you have a bedside gun at your ready quickly takes center stage.

The ZORE-X does exactly what it’s meant to – keeps the gun from being fired or a round chambered while in place. I tested the ZORE-X extensively, pulling, tugging, wrestling and even turning it over to my kids to see if they could manipulate any of the gun’s functions. Neither the ZORE-X or the gun budged – at least not until that code was dialed in.

What about having something in your chamber, forcing you to rack the gun? I’ll concede, it’s not my favorite idea. I know that unless you’re working on those slide manipulations the likelihood of you fumbling and bumbling the rack is very possible. Alternatively, failing to open a combo lock or key due to surging adrenaline and little-to-no fine motor skills also falls within the realm of possibility. In short, the ZORE-X, in my opinion, is just as fallible as any other gun lock. 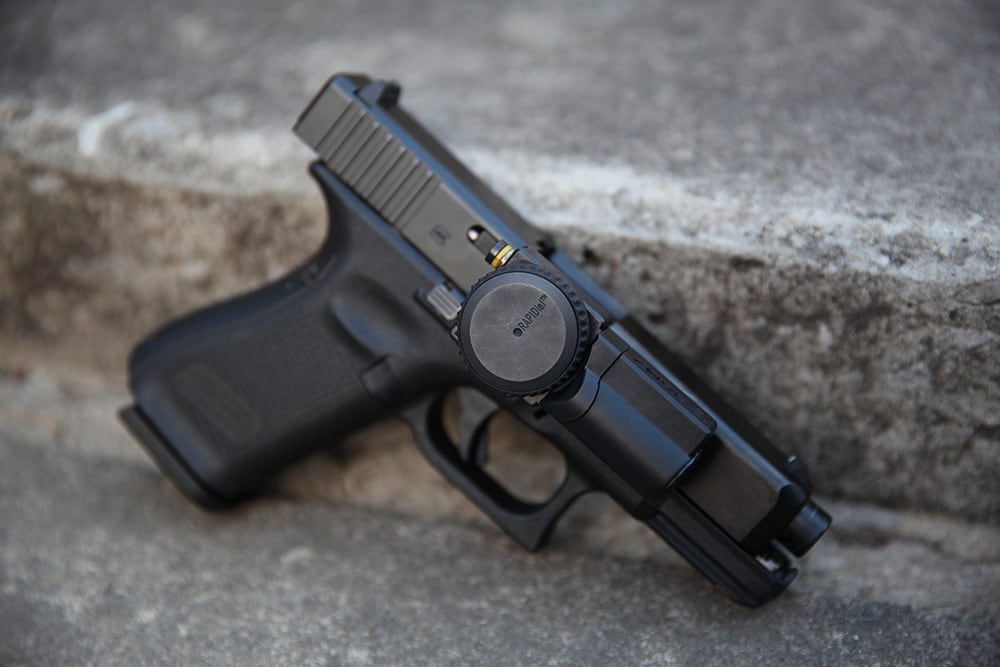 The ZORE-X mounted in the Gen. 5 Glock 19. (Photo: Jacki Billings/Guns.com)

While I don’t foresee myself giving up my quick access safe and turning my nightstand gun completely over to the ZORE-X just yet, it has come in handy as a means to store my carry gun. Eliminating the need to house two separate pistol safes, I can easily and efficiently store my carry gun at the ready in a more convenient manner. Sliding into the market with a price tag of $99, it’s not your cheap-o gun lock but it does offer advantages over traditional locking systems. For that price, you get a double tap of a locked trigger and slide; which, so far, no one else can claim. Is it something you’re going to buy for every gun in your home – no – but if safe open access to your gun is your bread and butter then the ZORE-X will suit you just fine.