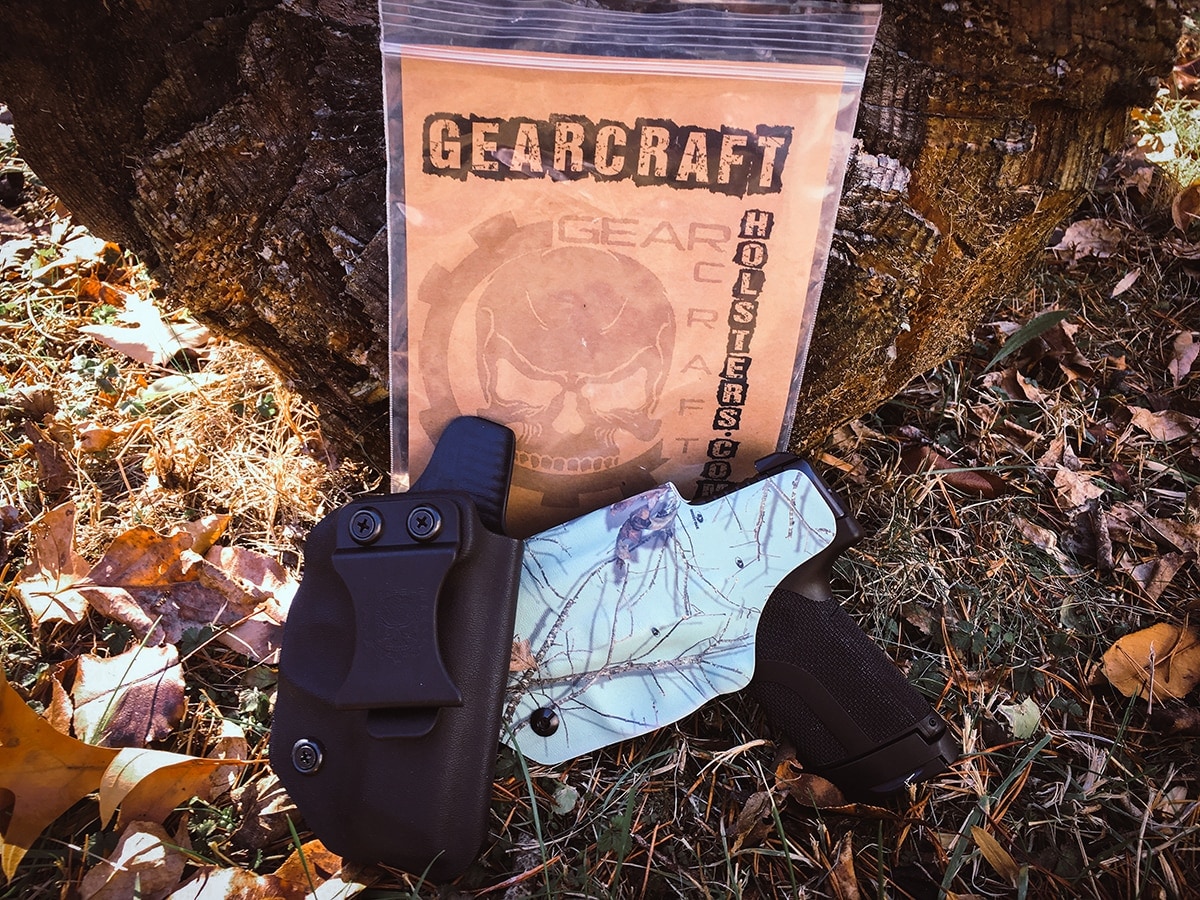 The GearCraft IWB was one of the first holsters to offer compatibility with the Honor Defense Honor Guard Pistol series. (Photo: Jacki Billings/Guns.com)

The Basics: What’s new with the IWB?

The Gearcraft IWB is a Kydex construction featuring a molded design that is specifically cut for each pistol it serves – in this case, it is molded for the Honor Defense Honor Guard Pistol. The Kydex is a thicker cut, lending itself to a more durable creation built to withstand the rigors of repeated use. 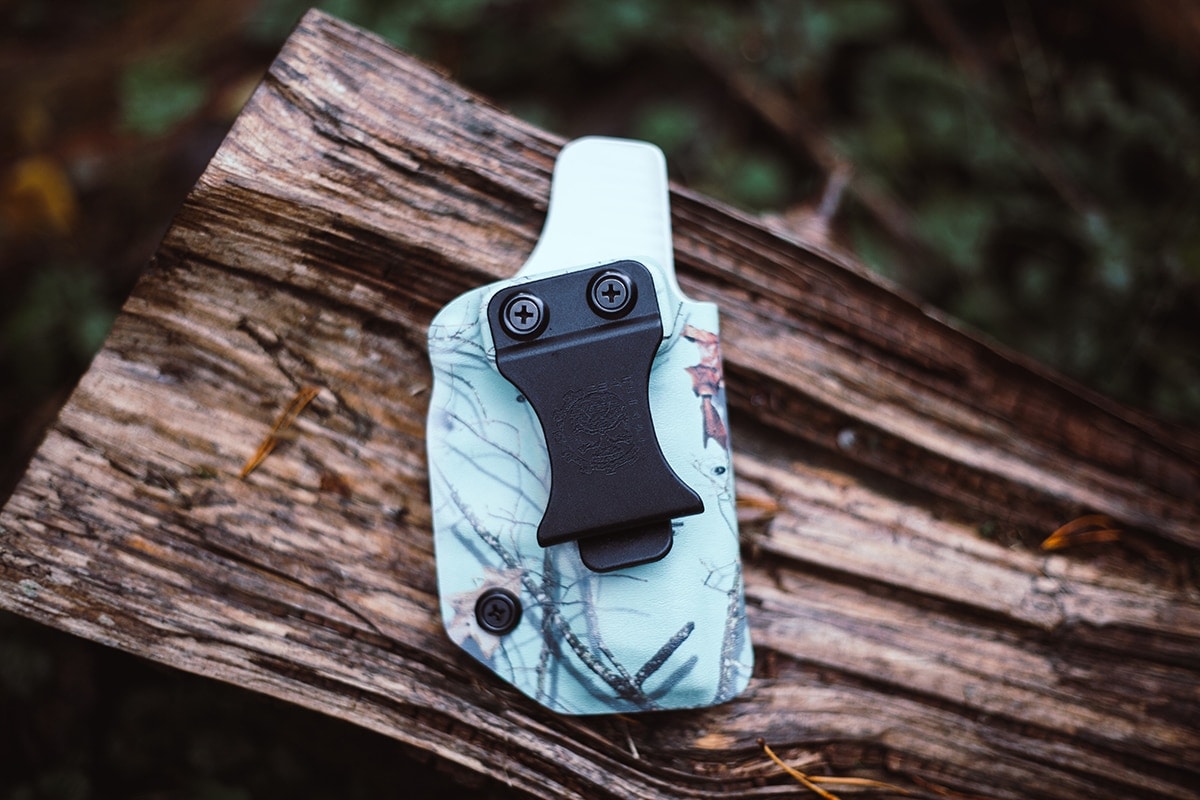 The holster is decked out in a robin’s egg blue woodland pattern, but boasts a bevy of other pattern and color choices courtesy of Gearcraft. (Photo: Jacki Billings/Guns.com)

Gearcraft brings a bevy of options for concealed carry consumers, allowing customers to customize their rig to their liking. In a sea of black Kydex holsters, the options are a perk. Though my IWB shipped with a plastic belt clip, consumers can opt for belt loops or a UtiliClip depending on preference. Gun owners also have a choice of color or pattern, subverting the usual all-black tactical scheme. For this review, I was sent both a standard black and a woodland pattern in a subtle yet feminine robin’s egg blue. 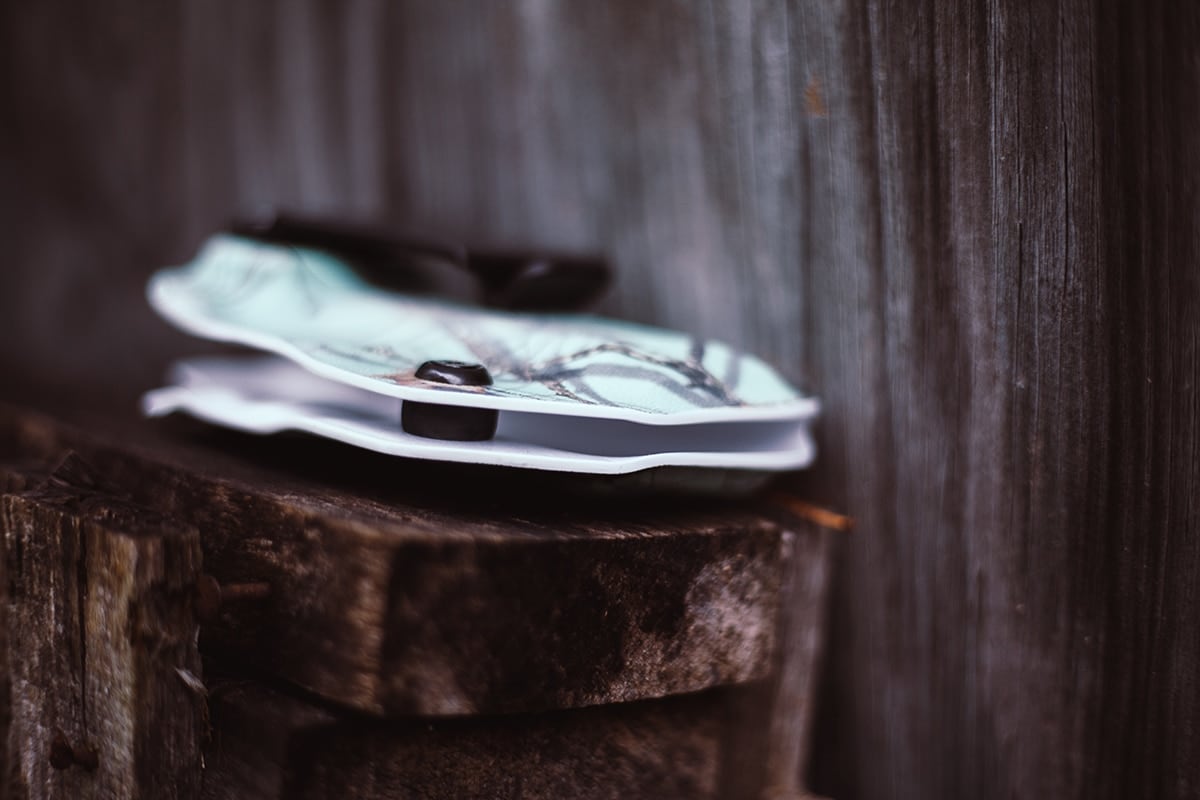 GearCraft also grants consumers the ability to choose sweat guard height, offering a full sweat guard, mid-guard or no guard at all. Rounding the options, IWB shoppers can choose compatibility with lights, RMR optics, suppressor height sights and even threaded barrels. In short, Gearcraft really puts the control in the hands of concealed carriers, letting them fine tune the holster before it ever arrives at their door.

The holster benefits from a few design tweaks that elevate its performance, making it a suitable choice for the Honor Guard pistol. The first is its adjustable retention. Retention is one of the most important aspects of a good holster, ensuring the pistol is safely retained in the holster until needed. The IWB achieves this via a molded construction, clinging to the nooks and crannies on the Honor Guard pistol, as well as a screw located on the bottom of the rig. This innocuous screw adjusts retention, allowing for the holster to be tightened or loosened according to user preference. This addition puts the onus on the user to determine how securely the holster holds the handgun. 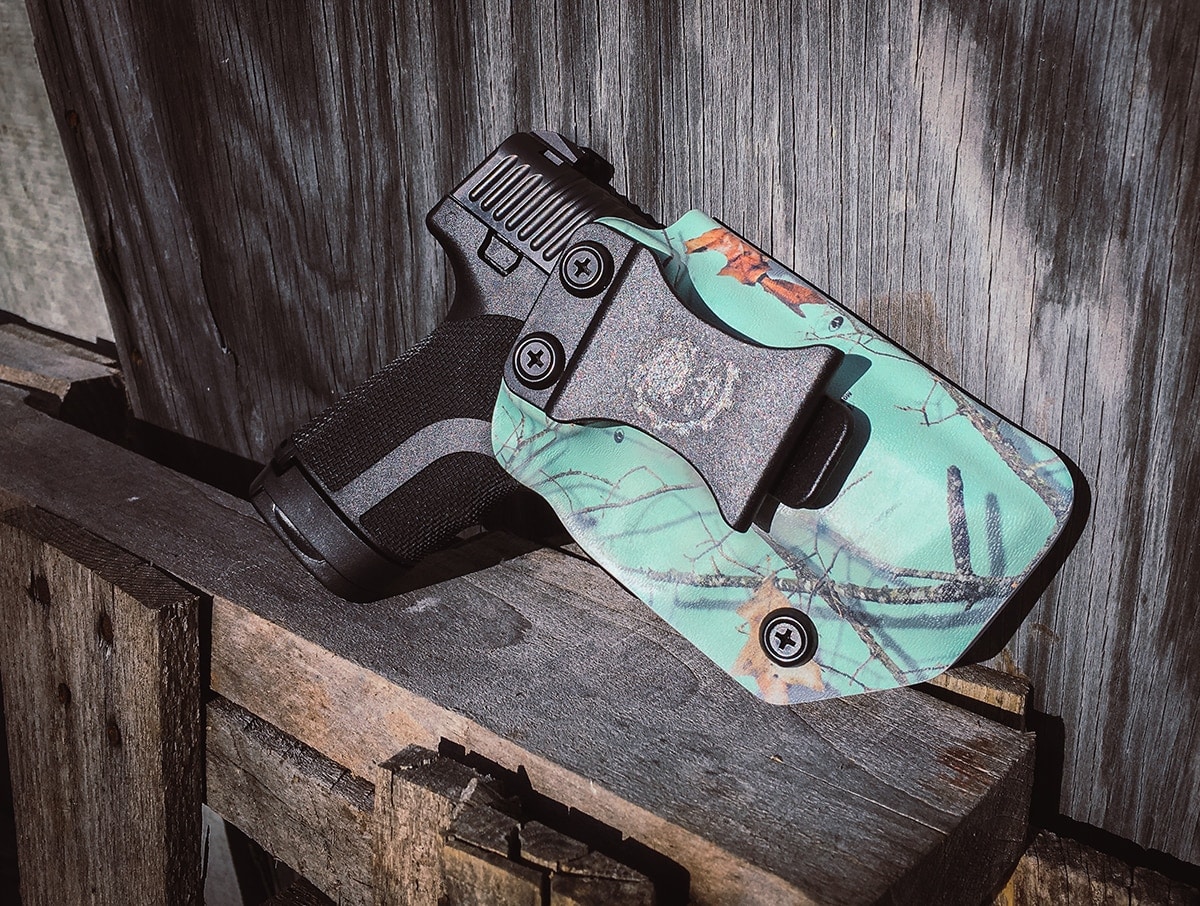 Despite its thicker Kydex build, the Gearcraft IWB conceals well when paired with the Honor Guard pistol. (Photo: Jacki Billings/Guns.com)

The second perk of the IWB holster is its belt clip. Able to cant 0 to 20-degrees via two screws located at the top of the holster, the belt clip again gives users the option to personalize their set-up. When carrying in the 4 o’clock position, I prefer a slight cant to my IWB to aid in drawing and with the IWB I can easily achieve that. While I generally prefer a stiffer belt clip made of metal – as plastic wears quickly over time – Gearcraft again opts for a thicker build resulting in a more durable design that endures repeated use.

Concealed Carry: How does it perform?

I was initially impressed by how sturdy this holster is. In my possession for over a year, the Gearcraft has suffered a few falls at my clumsy hands and has still managed to keep itself together. The tradeoff to such a durable design, though, is often concealment. In the case of the IWB it’s a little thicker than most my other holsters and on a small-frame like myself any extra thickness quickly becomes noticeable; however, Gearcraft has craftily constructed its IWB in such a manner that it still maintains concealability despite its girth. 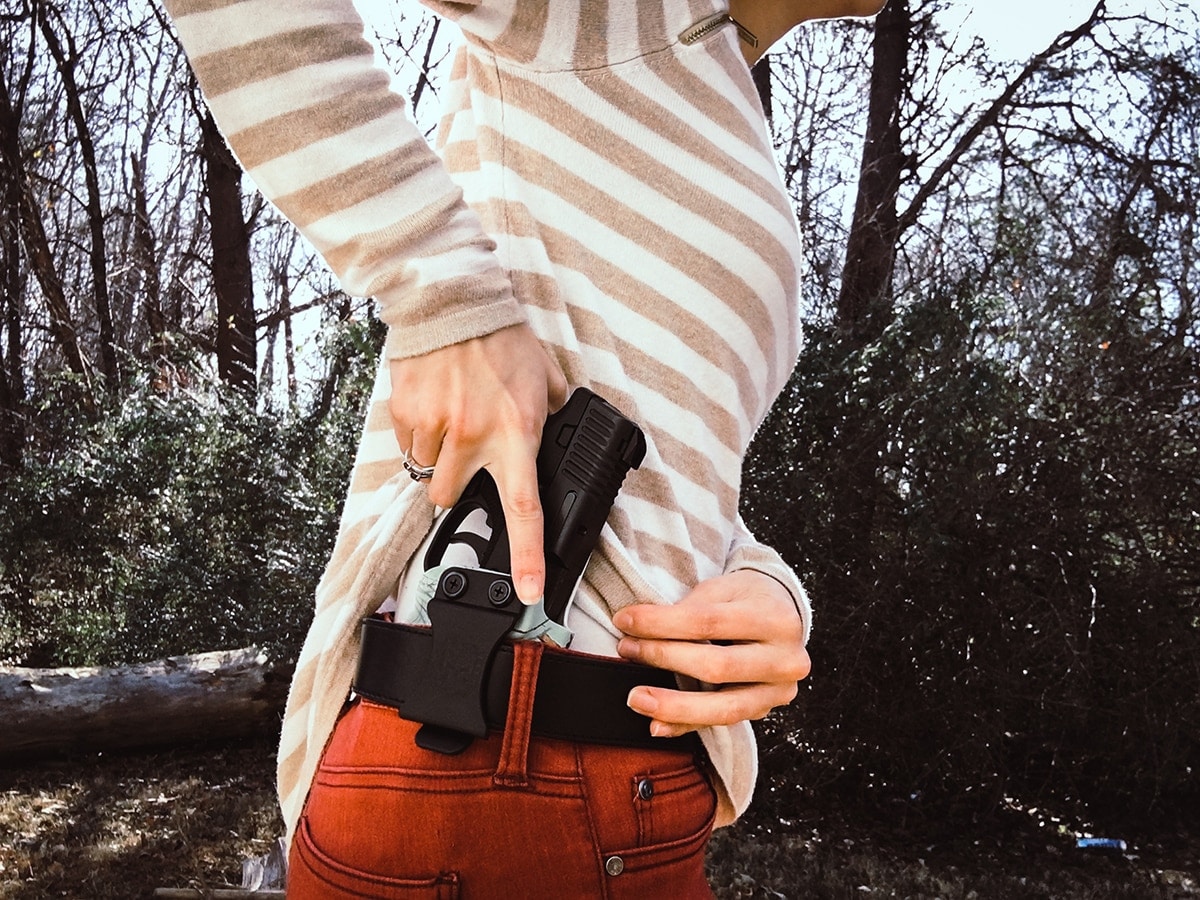 The IWB is user-adjustable for both cant and retention. (Photo: Jacki Billings/Guns.com)

Paired with the Honor Guard pistol, created with concealment in mind, the Gearcraft IWB easily slipped under blouses and sweaters disappearing against my side. A little heavier than some of my other holsters, the IWB necessitated a solid belt but any good holster/pistol combo should be supported by a sturdy belt.

Gearcraft has taken time to ensure all edges on the holster are rounded, preventing any discomfort or poking while carrying. The addition of a high sweat guard also lends itself to comfort, preventing the gun from rubbing against my skin.

The IWB opts for a plastic belt clip that, like the holster itself, is thickly made for durability. (Photo: Jacki Billings/Guns.com)

Cut for the Honor Guard, the pistol moved like butter out of the holster during the draw with no advanced wrestling moves required. The draw was smooth and efficient each time as was reholstering – thanks to the cant of the IWB.

The IWB holster I received was free from bells and whistles, but it offered all the basics a good concealed carry holster should – a sturdy molded design, secured trigger area and retention. Catering to concealed carriers with customizations, the Gearcraft IWB gives consumers the ability to craft a holster specifically for their own needs and budget. With a base price of $59.99, the Gearcraft IWB is a solid option for Honor Guard carriers, or other brands, looking for some style in their concealed carry get-up.