The Girsan MC1911 Sport will cure your "newgunitis"

Not long ago, I purchased a Rock Island 1911A1. You see, about 600 bucks is about the most money I, a recent college grad with a minimum wage job, can afford to afford to spend on a gun. And it was a pretty good buy. Yet, I got a recent case of “newgunitis,” leading me to scour the Internet — searching auction sites — for a second one.

But alas, affordable and in stock are not synonymous terms in these troubled times. However, when I thought all hope was lost, I stumbled upon the Girsan MC1911 Sport Model. 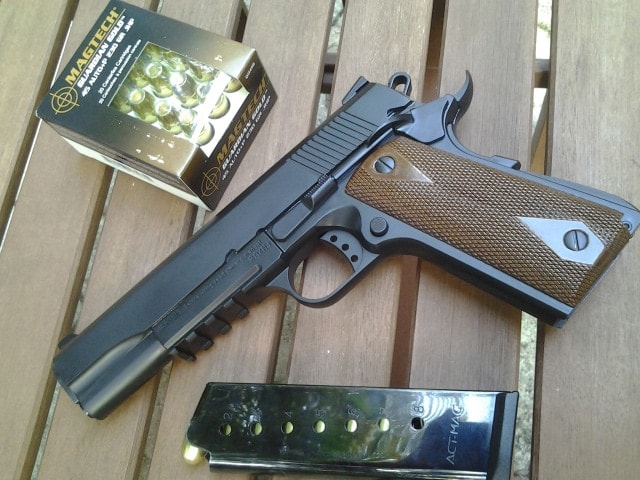 If you are unfamiliar with the company Girsan, as I was when I found it, let me catch you up to speed. The company is based out of Turkey and offers an entire line of both handguns and long guns, many of which are clones of popular designs from other companies. The particular model that caught my eye was their 1911 clone, with an extended beavertail grip safety and flashlight rail, designated the “sport” model.

After perusing Girsan’s website, and reading what the “tacticool” forums had to say about their 1911s, I decided it was worth risking the $452-investment. Long story short, I picked the pistol up from my local FFL dealer and found that while nice, it was on par with my Rock Island — albeit a loose slide, but no worries. 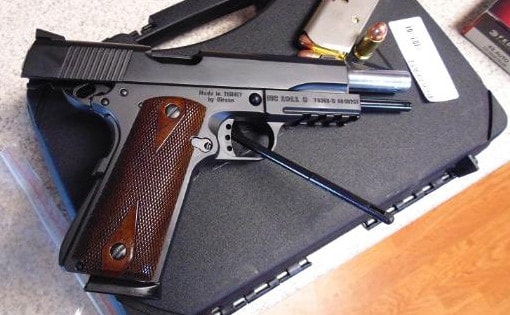 The pistol is chambered for .45 ACP, has a flat black finish (it also can come in a stainless finish), brown checkered walnut grips, and a full-length guide rod. The rear sights have white dot high visibility paint on them, though the front sight does not, but I plan to remedy this on my own. It has a shiny cold forged steel barrel, and according to Girsan’s website is supposed to have a 30,000 round shooting life. It came in a hard plastic case, with two barrel brushes, a brass and a plastic one, a cleaning rod, and an instruction manual.

Shooting it for the first time was a blast. I was using my own handloads, 230 grain Round Nose FMJ over 5.8 grains of Winchester WST powder at 25 yards. The first magazine grouped about 7 inches low and to the left. After adjusting my hold, I was able to shoot close to a 3-inch group off hand with the next magazine.

In total, I fired 150 rounds through it and had two malfunctions, both of which were feeding issues, the result of using an old, and very dirty, magazine I had in my range bag. The factory magazine provided with the gun functioned flawlessly.

I would definitely recommend a Girsan 1911 as a good beginner 1911 for someone who is on a budget, or just does not want to plunk down the amount of money for one of the more venerable brands. You get a solid, hardwearing firearm for a great price.