When Austrian engineer, Gaston Glock introduced his namesake pistol in 1979, he could scarcely have imagined that two decades later it would be adopted by more than half of the police departments in the United States. Available in calibers ranging from .380 to 10mm, Glock semiautomatic pistols set the standard all future pistols would be judged against. Why is that? What makes the Glock so popular in modern times with so many competitors offering similar performing weapons? To find out, we review the modern version of the gun that started it all, the Glock 17. 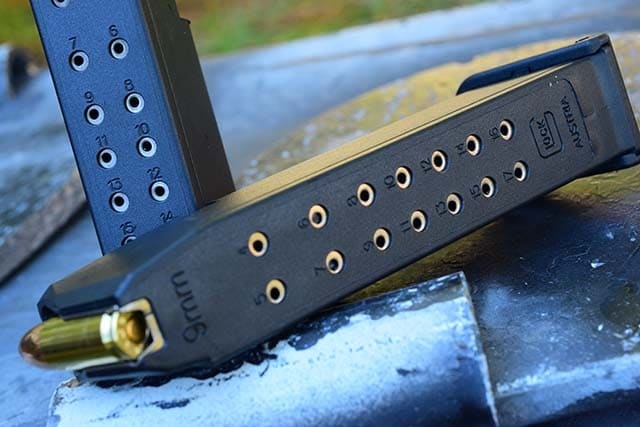 The Glock 17 ships with 17 round magazines (Photo: Jim Grant)

The Glock 17 is a polymer-framed, striker-fired short recoil operated breech-locked semi automatic pistol chambered in 9mm parabellum. Feeding from 17-round steel-reinforced polymer body magazines, the Glock 17 boasts one of the highest magazine capacities of its day.

Though this wasn’t the primary reason for the weapon’s popularity. That honor doesn’t belong to any single design aspect of the Glock 17, but rather the amalgamation of several.

When the Glock was introduced, the majority of handguns weren’t considered as reliable or accurate as a full-sized revolver. This opinion was no-doubt aided by the slew of ultra-cheap, post-war pistol designs flooding the market in the 1960s. Designs like the less-than-stellar Jimenez .380.

Though these critics do have a point. Self-loading weapons require their ammunition to be loaded hot enough to cycle the action. Additionally, these rounds must have a bullet shape conducive to the angle of the feeding ramp, in order to successfully chamber during the recoil cycle. Revolvers don’t suffer from this. So long as the round is propelled fast enough to leave the barrel, the ammunition is usable. 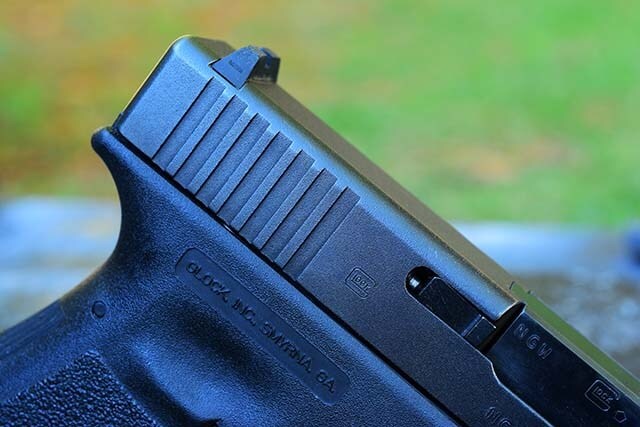 The Glock is still ammunition sensitive to bullet shape and velocity, but not nearly to the same extent as most pistols of its day. Hell, even the beloved M1911 had issues feeding anything bull ball ammunition unless a gunsmith modified the feed ramp. This shouldn’t be understated though. The Glock 17 was the most reliable, commercially-made semi-automatic pistol for over two decades.

Reliability, though crucial, isn’t the only reason for the plastic pistol’s rise to fame. The weapon’s light-weight construction with ultra-durable polymer and proprietary Tenifer finish make the Glock second only to revolvers in terms of durability. Thanks to its polymer frame, the Glock weighs a fraction of what most six shooters do, at a scant 25 ounces.

The culmination of these features is a weapon that is the next evolution of the hammerless, double action revolver. Think I’m crazy? A double-action only revolver is a compromise of reliability, durability and simplicity over capacity and weight. The Glock 17 is nearly as simple to use, featuring no external safeties. It is just as reliable as a revolver and weighs five ounces less than a Smith & Wesson Model 60 with a 5-inch barrel. It reloads infinitely faster than a revolver and holds triple the ammunition when topped off.

On paper the Glock has every advantage over older pistols and many modern ones, but how is it in practice? 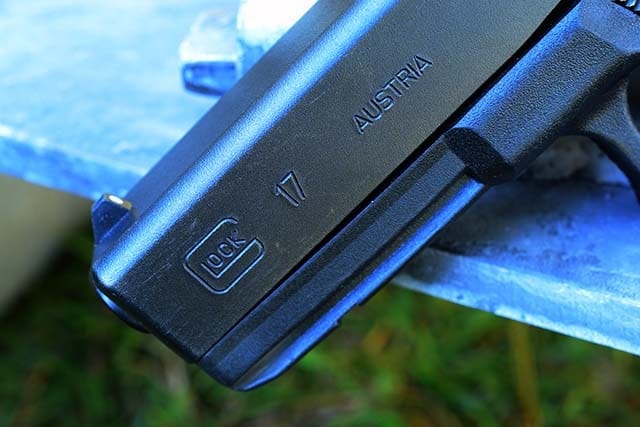 Third generation Glocks include a railed dust cover for lights, lasers or whatever attachment a shooter desires. (Photo: Jim Grant)

In terms of reliability the Glock is peerless. The model reviewed is my personal gun, and I’ve fired over 5,000 rounds of various 9mm ammunition through in over the course of several years. It replaced a second generation model 17 I had fired over 15,000 rounds through without a jam. In fact, the only way I was able to cause the Glock to malfunction was by pouring sand into the action, followed by diet soda. Even then, after a quick, “Tap, rack, bang” the gun was operational again. Word to the Delta Force operators of the world: don’t feed your Glock sand and soda, the smell is awful.

Accuracy from the Glock 17 is good bordering on great. When fired from a rest, Federal American Eagle 124 grain 9mm ammunition grouped 0.7 inches at 20 yards. Other brands including Aguila and Hypr grouped slightly worse at 0.9 inches. Talented shooters make hits on steel targets out to 100 yards with little effort, and phenomenal shooters have even hit man-sized targets at 300! 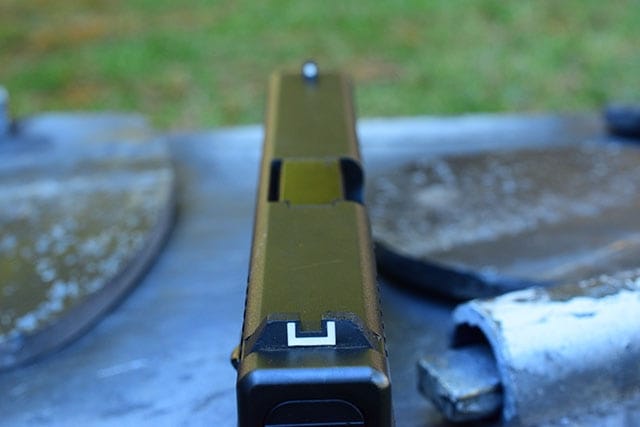 Glock sights are constructed of polymer, and feature a white outline and dot to aid in accuracy and target acquisition. (Photo: Jim Grant)

Many shooters express disappointment with Glock pistol ergonomics, but I’ve found that the weapons are easily tailored to the individual shooter’s preference. For instance, I have smaller hands and the Glock’s magazine and slide release are beyond my reach. In order to actuate them, I need to shift my grip. Recently I installed an extended mag release button and slide catch for a total of $20 and remedied both these issues.

Though this still leaves the most bemoaned portion of the Glock, its trigger. The Glock features long, spongy safe-action trigger. It consists of a large outer-trigger, and a thin blade that must be depressed to enable the weapon to fire. It is a little heavy, but thankfully can be lightened with an optional disconnect spring from Glock. 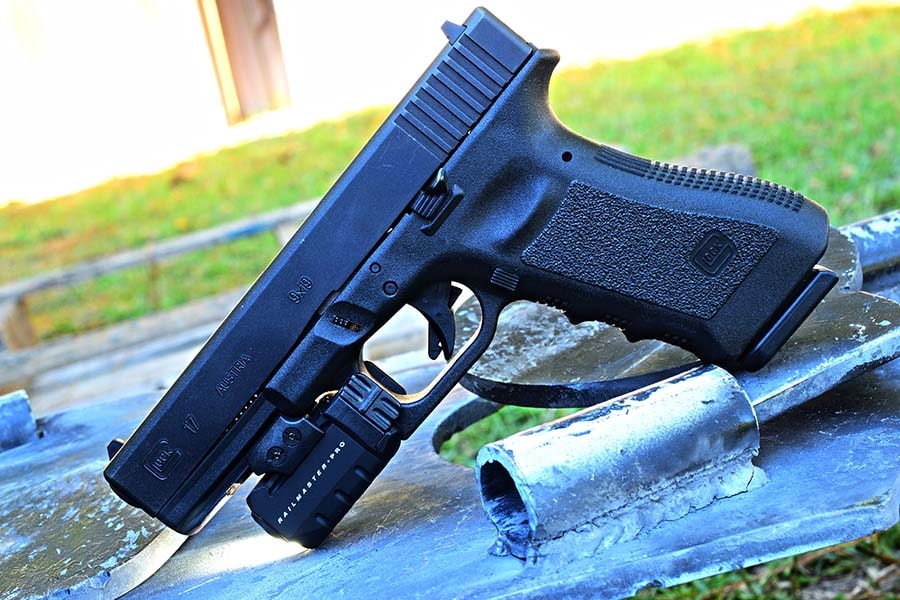 The Glock 17 taking advantage of its accessory rail and looking like a total bad-ass. (Photo: Jim Grant)

Retailing for $599, The Glock 17 is a solid performer at a reasonable price. There may be more ergonomic modern designs out there, but few can match the Glock’s simplicity and reliability. Additionally, finding a gunsmith familiar with Glocks is incredibly easier than one for newer designs. Shooters who appreciate the simplicity, reliability and durability of a double-action revolver will find the Glock a perfect upgrade to their ammunition-starved six-shooters. Other shooters looking for an ideal bed-side gun with no extraneous controls to fiddle with in the dark, will find a relentlessly reliable companion in the original plastic fantastic, the Glock 17.