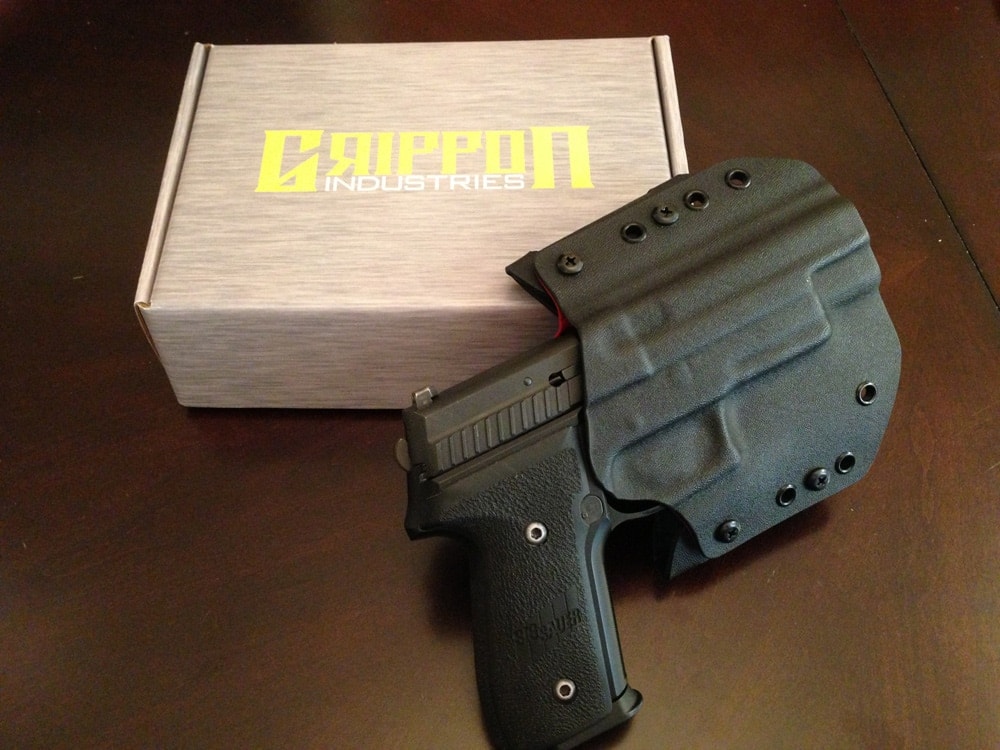 The Griffon Industries kydex holster with a SIG 229. (Photo by Brent McCluskey)

I currently have a drawer full of holsters for different occasions. Some excel at concealed carry, while others work well on the range, but I have yet to find one that can do it all, until now. In the all-consuming quest to find the perfect all-around rig for my guns, I collected a new sleek and sexy tacticool holster from Griffon Industries.

Griffon Industries holsters have a .08 thickness that comes with progressive belt loops and will fit anything from 1 1/2 to 2 inches in width, so if you’re not sure what size belt you want to use, don’t sweat it.

It’s also cant adjustable so if you don’t like the straight up and down configuration, with a few turns of a screwdriver you can switch it out to more of an FBI feel.

The inside of the Griffon kydex holster, left, and the outside. The holster fits belt widths of 1 1/2 to 2 inches. (Photo by Brent McCluskey)

If molle-compatible is your thing, well, you can strap this badboy to a vest, pack or whatever else you can think of.

Here in California, owning a suppressor is like finding a paunch, green leprechaun dancing happily around a pot of gold at the end of a double rainbow – it just doesn’t happen.  Nonetheless, all Griffon Industries holsters are compatible with raised suppressor sights and extended threaded barrels — a neat little feature if you follow that niche.

Let’s say after reading the aforementioned, you’re super set on getting a holster from Griffon Industries, but they don’t make one for the oddball hand cannon you have.  Not to fret, they also do custom work for an extra $10.

When I unwrapped my parcel from the UPS store, the holster was encapsulated in a high-quality box and also filled with various patches, buttons and Griffon Industries literature. S.W.A.G. 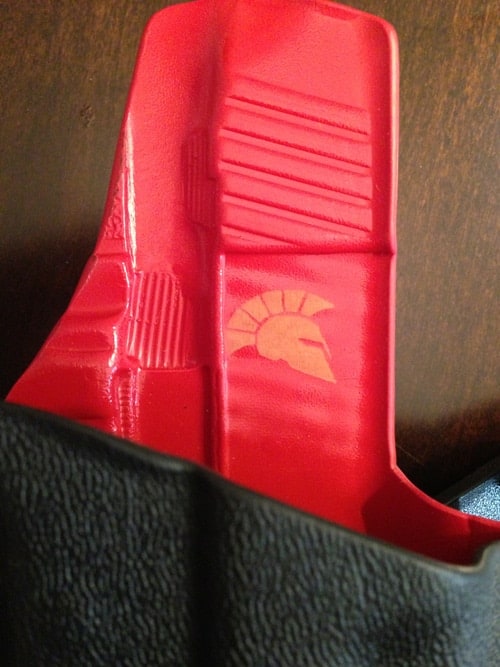 The Griffon Industries logo is a spartan helmet, which is also popular item for cosplay. (Photo by Brent McCluskey)

It was evident just from turning the red and black kydex holster over in my hands that it was a high quality piece of gear. The edges were sanded smooth, leaving no sharp surfaces for clothes to catch on, and the level of detail achieved in the impression was incredible. Add the golden Spartan logo on the inside of the sweat guard and you’ve got even more flare.

What stood out the most to me was the belt loops. They’re fully cant adjustable, interchangeable for inside-the-waistband carry and probably the sturdiest belt loops I have seen on a holster.

Before I even put the holster on, I wanted to check its retention, and let me tell you, it’s tight. The pistol stays where it’s supposed to even when the holster is held upside down and vigorously shaken. I didn’t utilize the molle feature of this holster but given how snug it is, I think it would work well attached sideways to a vest.

Drawing from the three o’clock position with a straight up and down orientation was a breeze, if not a little stiff. After drawing and re-holstering about a 100 times, it seemed to loosen up just enough for a manageable draw while still maintaining a desirable retention level. And since it’s kydex, there’s no worry of the mouth collapsing without support from the pistol. 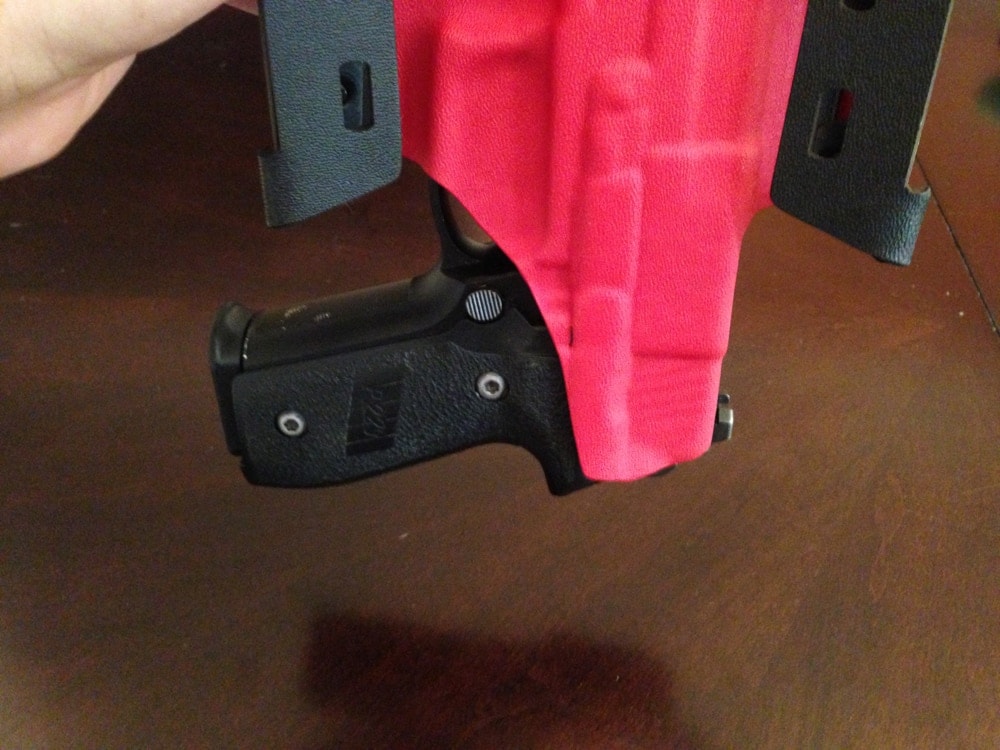 A Griffon kydex holster retention is tight. Even when upside down and shaken, it retains the handgun. (Photo by Brent McCluskey)

While wearing the holster outside-the-waistband, a long, baggy t-shirt is a must and a button-up is even better, but that is going to be the case for any similar product.

The weight of my SIG 229 was very evenly distributed and during standing and walking activities I couldn’t even tell it was there. It didn’t move, it didn’t shift, and it didn’t rattle.

Sitting, on the other hand, was a little more uncomfortable. The full-length sweat guard seemed to dig into my side a bit harder than other holsters I have used. Given the overall quality of the product, that’s something I am willing to deal with.

You get what you pay for

After using this holster on the range, walking around for hours on end and performing daily tasks, the overall fit and comfort is impressive. My only gripe would be how the sweat guard digs into my side sometimes when sitting. This may be something that can be fixed from a little tweaking — changing the cant or position of carry — but all in all not that big of a deal.

What’s the price of quality? $130. That’s more than a lot of holsters out there but I feel because of the meticulous attention to detail this product has, the price is justified. 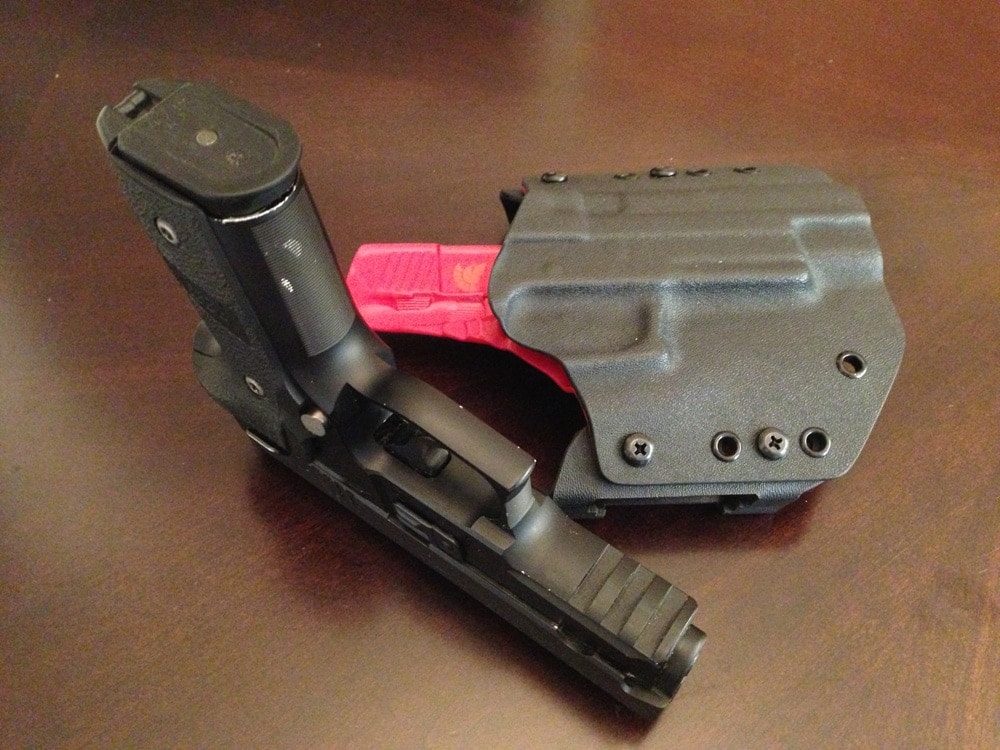 The SIG 229 slipped out of the Griffon kydex holster. (Photo by Brent McCluskey)

In the end, I will be retiring my old inside-the-waistband holster and begin using this one from here on out. Overall, I’d say if you’re looking for a new kydex holster that looks sexy and sleek and also performs exceptionally well, try one from Griffon Industries.