GT 27 Tanfoglio pistol: A gun that trumps the Gun Control Act of 1968 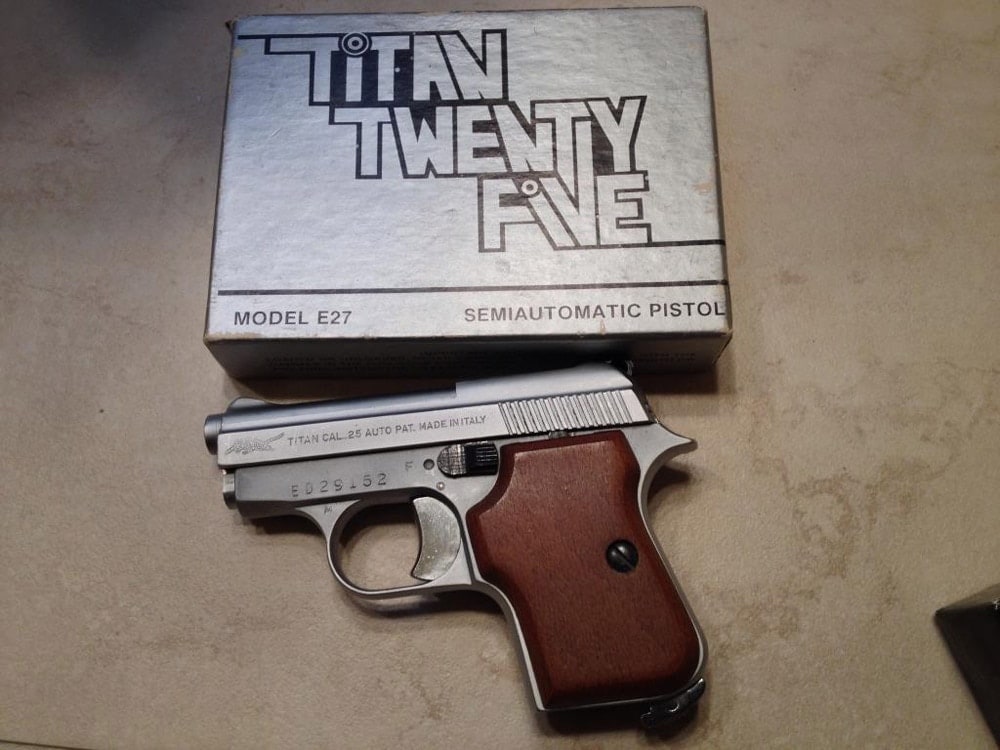 The Gun Control Act of 1968, which among other things cut off importation of a great many small pocket pistols, proved one thing: Back in the days before locked breech poly frame sub compact 9mm, or super lightweight .32 or .380’s, small pocket .25’s were the go to choice for a tiny pocket automatic.  None other than the great John Moses Browning had pioneered the concept of the “vest pocket” pistol, and it didn’t take long for the concept to take off.  By the late 60’s, there were a number of small pocket .25’s on the market.  Colt and FN both marketed a top of the line design not too far removed from Browning’s original, and on the low end front, there were always offerings from Spain, West Germany, and Italy.

And so, enter the GT 27 Tanfoglio pistol

The GT 27 Tanfoglio pistol is a nice little pocket .25 that resembles in some ways the Beretta .25’s, but without the tip up barrel. It is a single action pistol that holds 7+1 rounds, and features a simple trigger blocking safety and a half cock on the hammer.  The open slide around a fixed barrel makes for a sleek little gun, and the whole pistol has a sort of old world charm about it. 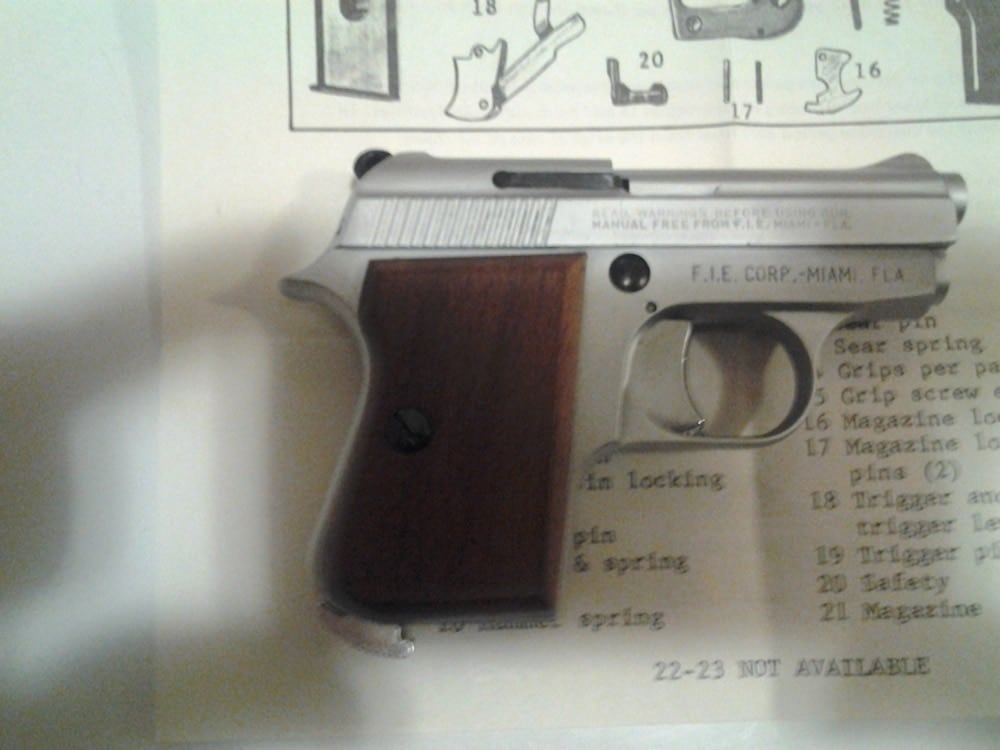 Until 1968, these guns were imported straight from Italy with a machined steel frame, but the rather protectionist Gun Control Act of 1968 changed all that. Aside from blocking the importation of many military surplus weapons (to the delight and desire of some domestic manufacturers), it also instituted a system of points on handguns, based on size, caliber and sporting features (target grips, adjustable sights, barrel length, etc). Needless to say, a tiny little .25 had no hope of being imported, which of course was the whole idea.

So Tanfoglio sent parts.  Lots and lots of parts in fact, and they were assembled on zinc alloy frames, first by EXCAM, Inc. of Hialeah, Florida, and later by Firearms Import and Export Company, also in Florida.  The GT-27 in my collection features a U.S. made frame, with all imported parts on it.  Even the barrel and feed ramp are made overseas, meaning the only assembly needed in the U.S. was to pin, screw and press in the various parts that make up a semi auto pistol. Needless to say, these guns sold well, up until 1990 when FIE went out of business for good.

The gun itself, no matter who imported it, or when is a joy to shoot; although it should be noted that the last FIE made guns were all Zamac, a zinc-based metal commonly alloyed with aluminum, magnesium and copper, and prone to slide failure. 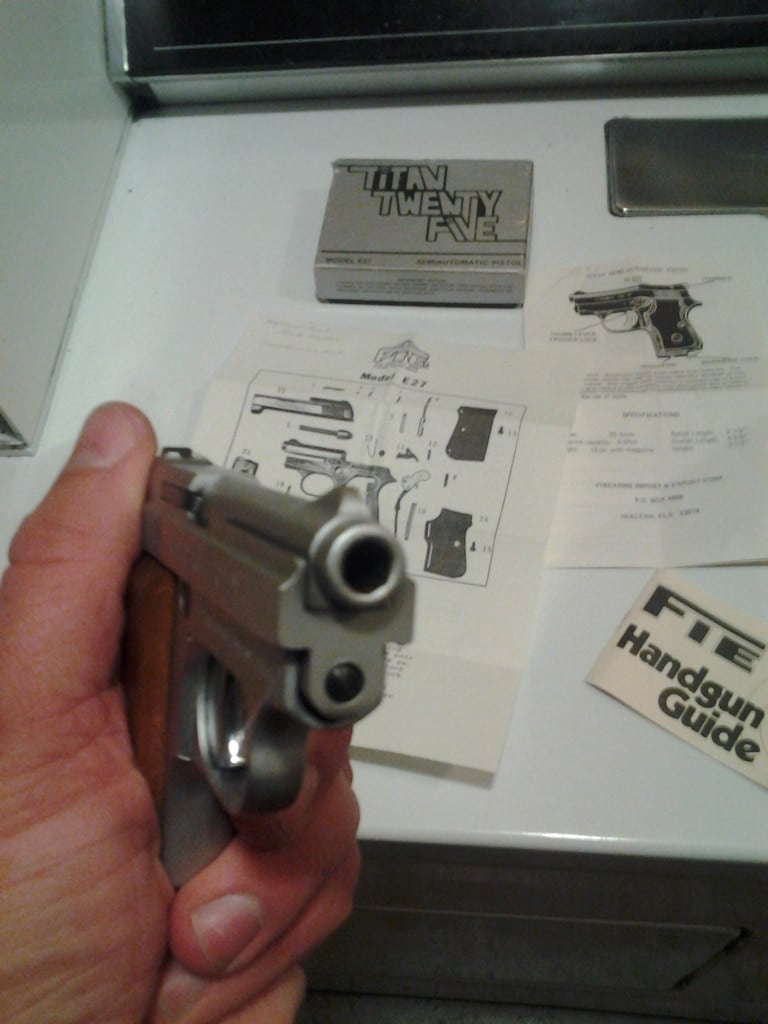 It may resemble a Beretta Tomcat, but the GT 27 Tanfoglio does not have a tip-up barrel. (Photo credit: Steve Coffman)

The pistol is small, yet comfortable to hold, with a reasonable single action trigger.  The tiny slide gives me some fits, and I find it easier to cock the hammer before pulling back the slide, which sometimes requires a light tap to chamber the first round. I don’t think this is a fault of the gun, as much as it is a fault of my large hands to fully manipulate a rather small slide.  Either way, once a round is chambered, the gun will reliably function until the magazine runs dry.

As is my usual test with pocket pistols, I can keep the entire magazine within a paper plate at belly gun distances.  Being a .25, it’s one of my last choices of a gun to actually carry in a social situation, so it mainly stays at home as a curio.

There is some debate on the safest way to carry this gun. Some carry it hammer back, with the safety on.  Others will carry it safety on or off with the hammer on half cock.  Still some have noted the inertia driven firing pin, and opt for safety off, and a hammer down over a live chamber.  This last choice bothers me to no great end, and I would not advise it, simply because there is no hammer or firing pin safety on this gun.  I personally carry it with the hammer cocked, safety on, and a round in the chamber, having satisfied myself that short of a severe mechanical failure, the gun cannot discharge accidentally. 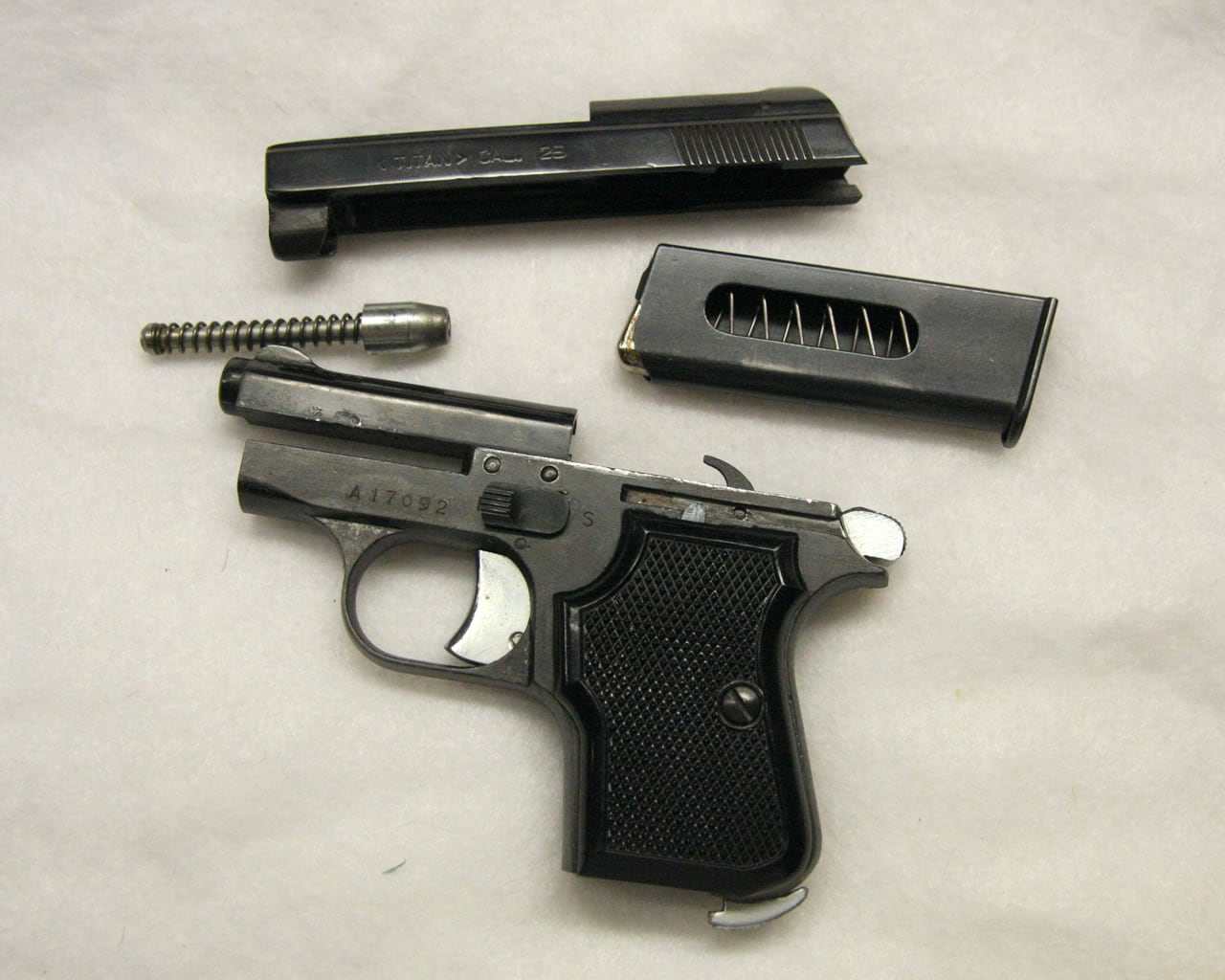 Take down is fairly simple.  First, remove the magazine and clear the chamber.  Cock the hammer fully back, and move the safety switch forward to “safe”.  Draw back the slide as far as it will go, and lift up.  The slide will lift free of the gun, and the guide rod and recoil spring may then be removed.  The safety switch can also be taken out at this time.  No further take down or disassembly is desirable at this point.

A close examination of the gun will show that it is fairly standard in operation and design, and built to be as simple as possible for it’s type, while still functional.  Reassembly of course is the reverse of the takedown.

The GT 27 and clones were made from the 1960’s or possibly earlier until 1990, and can be fun to collect. The earliest all steel Italian guns are of course the most desirable, followed by the early EXCAM imports.  FIE sold several variants, including a highly ornate and gold plated “ladies” gun with painted roses on the grips.

The best part about collecting the GT 27’s are their low cost and ready availability.  Many thousands were sold in this country, and many still remain in sock drawers and closets gathering dust, and even the scarcest will not command much over $200 new in box.  But to me, the best thing about them is the fact that despite an attempt to block imports of guns of this type, it didn’t take long at all to continue bringing this small Italian automatic to a large and willing market.