Trying to pin down an identity for a Mossberg 500 is only slight less futile than trying to pigeon hole the 500’s only real competition, the Remington 870.  They all have one thing in common: they’re solid pump shotguns.  Other than that?

Most are 12 gauges and the 500’s reputation has been built on the success of the tactical line.  Mossberg’s latest addition to the 500 family is a pugilistic 20 gauge.

The Mossberg 500 Persuader in 20 gauge

The Mossberg Persuader itself comes in some basic variations.  The eight-shot model is 39 inches long.  The barrel comes in 18.5 inch and 20 inch variations, and is available with a stand-off breaching break (on the 18.5 inch version).  Different length stocks allow you to choose a comfortable length of pull.  On the short end, at just 13 inches, the gun feels very small.  Other options, like the adjustable stock, allow for anywhere from 10 to 14.5 inch lengths of pull.

The finish on this gun is a matte black.  They’re available with a bit more gloss in the blued versions, or a mix between the blued finish and the matte of the black.  Mossberg’s making three sight variations: a white dot, a bead, and a ghost-ring with a fiber-optic front sight. 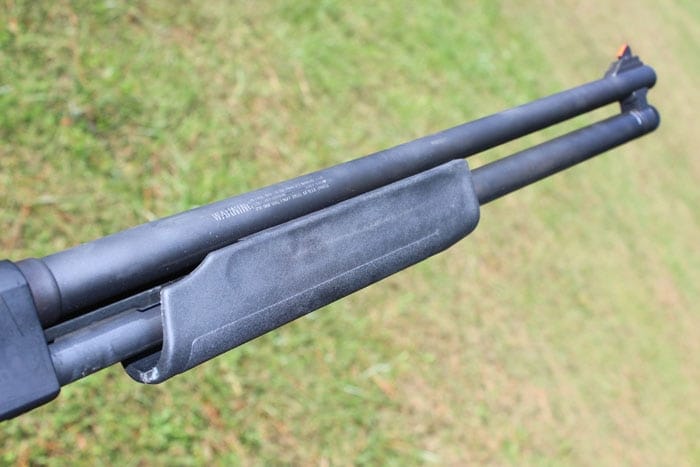 The forend, like most stock forends, is functional.  It has a light texture to it that makes getting a good grip easy enough, yet it lacks the aggressive ridges on some of Mossberg’s gun.  Beneath it, the magazine tube will hold eight (or a shorter version holds six) 3-inch shells.

The ejector is a heavy claw that pops empties out and slightly forward.  The lever that actuates the slide is just behind the trigger guard, where your middle finger comes in contact with the grip.  The safety, which sits on top of the tang, is easily reached with the thumb in a natural shooting position.

Shooting this gun is much less wearing than shooting a 12 gauge.  I was honestly quite surprised by the difference.  Part of me thinks that isn’t a good thing.  The 12 gauge owes its reputation to its ballistic effectiveness.  The price of that performance is recoil.  But the 20 gauge is fairly relaxed.

The gun loads easily and cycles with the reliability I expect from a 500.  We had no failures to feed.  No jams.  No failures to extract.  Even running the gun hard, in driving rain, it never faltered.  That’s saying something, considering any lubricant between the heated working parts had been replaced with water.  In fact, I didn’t know how bad it had gotten until I got home that night and cleaned it.  We’d had the 500 sitting in the rain off and on for hours on one range day, but it never effected its ability to function. 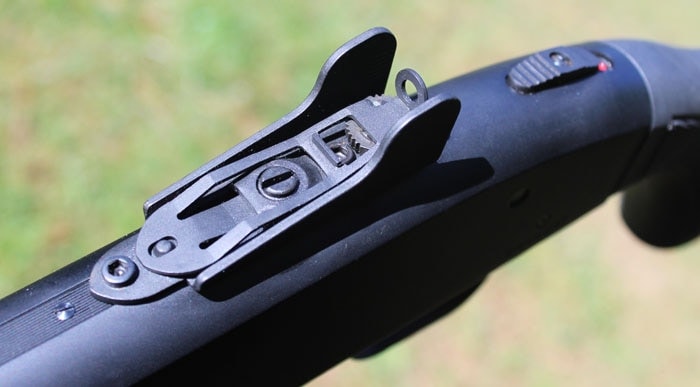 The sights on the Mossberg kick ass.  I like a good ghost-ring on a shotgun.  If I can’t have a working red dot sitting on the top of the gun (or even if I can), I want sights like this.  They are easy to use, fast, and Mossberg has gone the extra mile with the thin, white horizon line on the back of the ring.  The subtle line across the back of the ring is clearly visible, and helps when you are trying to level the front post quickly. 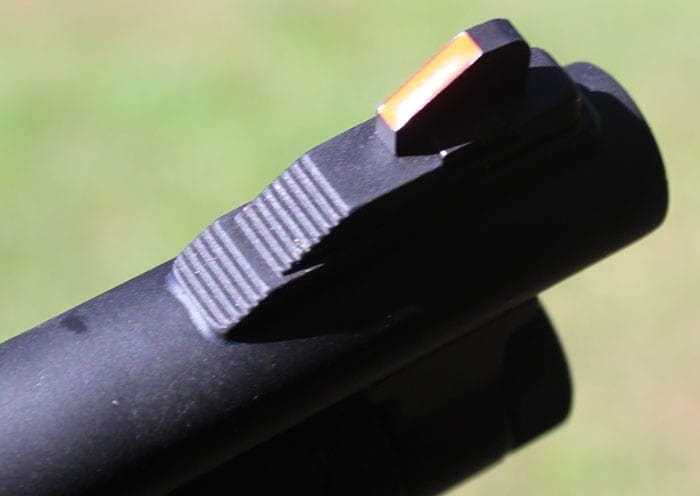 Mossberg’s making three sight variations: a white dot, a bead, and a ghost-ring with a fiber-optic front sight. (Photo by David Higginbotham)

The front post itself is bright and easy to reference.  It stands tall on the end of the barrel and is dovetailed into its mount for easy drift adjustments.

But is the 20 gauge less persuasive?

You knew I was going to ask.  Of course it is.  It is a great gun, and absolutely lethal.  Yet the 12 gauge has such an overt authority.  It kicks hard, but that’s nothing compared to the impact on the other end.  It looks like my Mossberg 590 A1.  There isn’t that much of a difference in their sizes.  But when I shoulder the new 500, it feels a bit like a toy.

At 6 pounds, it is much lighter than my 12 gauge.  The barrel on the 20 gauge, even though it is not thin or in any way fragile, feels thin by comparison.  Keep in mind what I’m saying here.  The 20-gauge 500 Persuader is solidly built, but if you’re accustomed to the feel of a heavier gauge shotgun, it isn’t going to feel like much.

Maybe there’s more to the equation 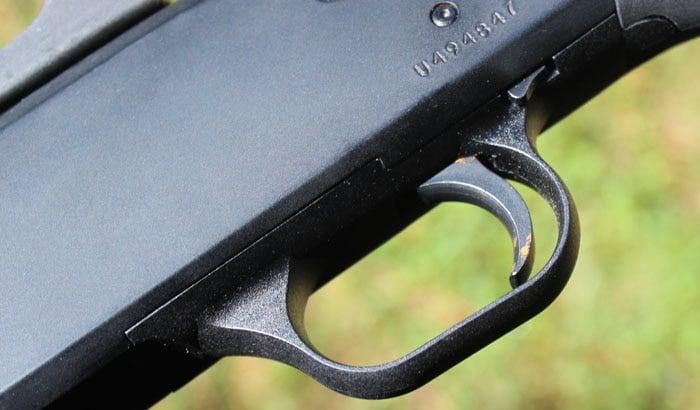 Mossberg 500 Persuader gets worn out because it’s so much fun to shoot. (Photo by David Higginbotham)

The 20 gauge has a nice thump.  I’d expect it would feel pretty solid to someone with a small frame.  My wife weighs 100 pounds less than I do, for example.  She can use a 12 gauge, but she doesn’t like to.  She doesn’t look at training the same way I do, but the 20 gauge Persuader may change that. It would be an ideal transition between a break action .410 or 20 gauge and a pump gun for a teen.  The short stock and short throw make it ideal for those who haven’t hit that last growth spurt (or who aren’t going to).

The 20 gauge opens up a whole new option for shooters who want serious defensive firearms, but who aren’t going to pick up a 12 gauge.  For the rest of us, those who would prefer the larger guns, this can be a really useful training tool.  Because of the gun’s light weight and rugged construction, the 20 gauge 500 would be an ideal truck gun.  It could even be a logical addition to a competition combination. 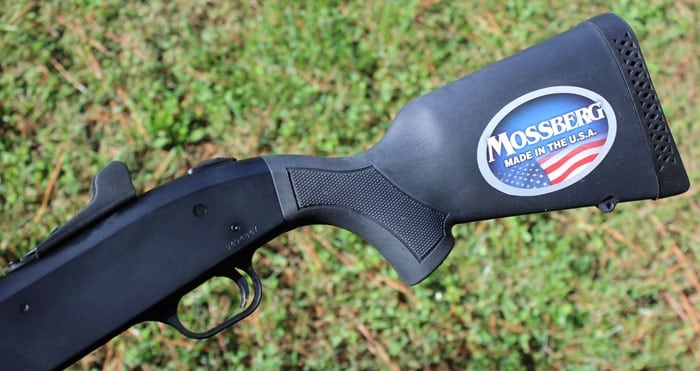 Made in America. (Photo by David Higginbotham)

That’s the take-away, here.  The 500 line has always been about potential.  MSRP on this version pictured here is $485.  That should shake out to the $450 mark.  Twenty-gauge shells are going to be a bit harder to find than bulk packaged 12 gauge, and may be a bit more expensive because of this slight scarcity.  While you won’t find as many variations for defensive loads, it’s no big deal.  We’ve all been using various combinations of hunting loads for self defense.

As I would say about any Mossberg 500, the gun you take away from the store is just the beginning.  As the popularity of the platform picks up speed, the aftermarket parts suppliers will begin sizing down their 12 gauge accoutrements, and the 20-gauge Mossberg 500 will be a blank slate for you to customize to meet your exact needs.