I’m a big fan of Arsenal’s AKs.  But they’re very modern.  The polymer furniture and design of the forends keep the Arsenal guns current.  But they only hint at the rich history of the AK platform.  And sometimes that sense of nostalgia wins out.

I was in middle school in the late 1980s when CBS aired Tour of Duty.  The show was great.  If you were 14.  But it had some great guns and some great music.  The show opened with the Rolling Stones’ Paint it Black, which was not the only idea the show pilfered from Full Metal Jacket.

The Stones and AKs.  Banana seats on Huffy dirt bikes, banana clips (yes, we called them clips) on Chinese Norinco AK copies.  Those were the days.

I’m not so smitten with the banana seat anymore, but I still have a soft spot for vintage AKs.  And The Stones.

I’m not the only one.  There are a number of companies importing AKs and parts kits into the US.  Import regulations stipulate that incoming guns have to be “sporterized,” which means they are devoid of their typical tactical accoutrements.  No pistol grips, or muzzle breaks.  No bayonet lugs or folding stocks.  You get the idea. 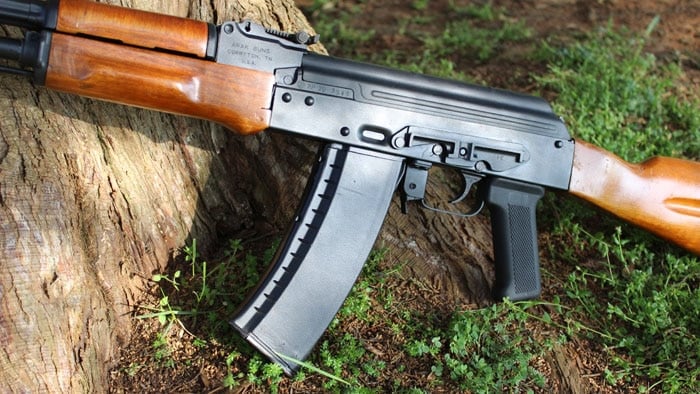 The other option for importation is a brutal form of dismemberment.  A perfectly good AK is sent to the butcher shop where it is taken apart (sometimes violently).  This is usually the fate of military surplus guns.  Some of the parts are then packed up and shipped state-side, where they are sold.  A few of them are actually put back together with the addition of some American made parts, which makes them legal again.

The people who rebuild these guns have to have a deep love of the gun and a strong skill set.  The AK-74 pictured here began its life as a Bulgarian AK-74 and was rebuilt by ARAK Guns, in Corryton, Tennessee.  Rumor has it, these guys were with Waffen Werks, another Tennessee AK 74 builder that specialized in resurrecting Bulgarian AK-74s.

ARAK is a small company, which allows them to specialize in this sort of work.  And they are currently offering two versions of this rifle, one with wooden furniture and one with polymer furniture.  Everything else is the same.  The guns are rebuilt with more than the requisite number of American parts (enough that you can use surplus magazines and still be 922r compliant). 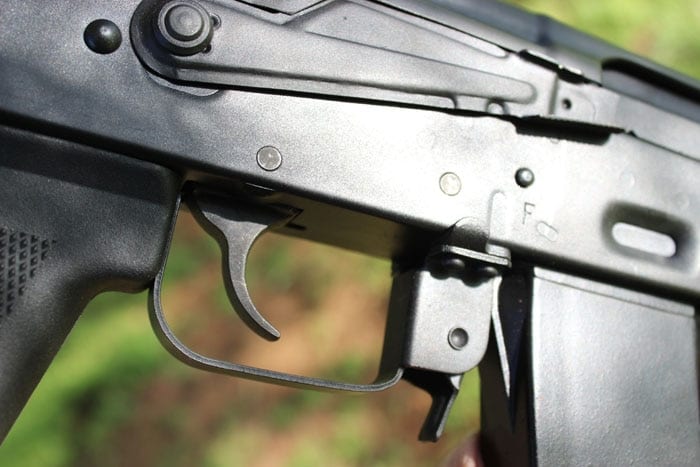 The barrel, Tapco G2 fire control group, receiver, & pistol grip are all American made.   The guns are finished in KG GunKote finish.  And they ship in a standard Plano Rifle case.

They’re selling their guns through RRC Firearms, an Oregon dealer that specializes in AKs.  As I write this, the ARAK AK-74s are on sale for $900.

The ARAK flies.  The Tapco trigger group is clean and crisp.  Precise shots are easy because of the trigger.  But the 5.45 has very little kick to begin with, and the muzzle break eats up what’s left, so making repeat shots is almost as easy.  And fast.  The gun really flies. 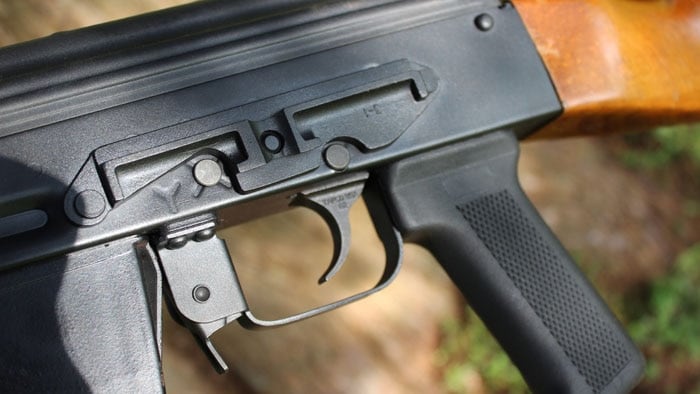 The surplus magazines work perfectly.  We didn’t have a single failure to feed or eject.  The gun really builds up a head of steam and chews through the steel cased 5.45.  No issues at all. 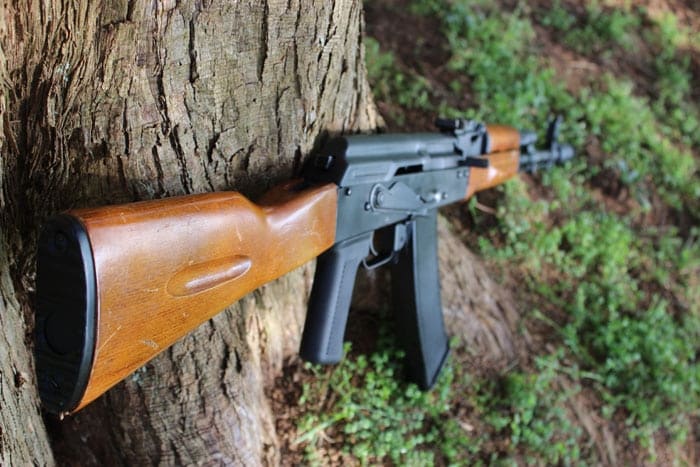 The wood on the ARAK is nice.  It heats up to a warmth that feel good in the hand.  But it isn’t anything to look at.  And it may show some signs of use.  Scratches and dings are common, but not distracting.

My first groups with the ARAK were listing an inch to the right.  I put it in the vice and got the same result.  At 25 yards, with a rifle, I can usually thread a needle.  The whole front sight will needed to be adjusted, a fraction of an inch.

Until I get this worked out, I’m not going to be able to judge any sort of iron-sight accuracy.  Much less at any distance.

The only other issue is an unintended consequence of the otherwise flawless KG GunKote finish.  The parts are designed to fit without the thick coating of GunKote.  Once coated, the dimensions of the parts change, however slightly.  The safety on this one is tight.  That’s the only place where the finish isn’t ideal.  After working it out for more than a month, it has begun to loosen.  But I’d like to see it move with less effort. 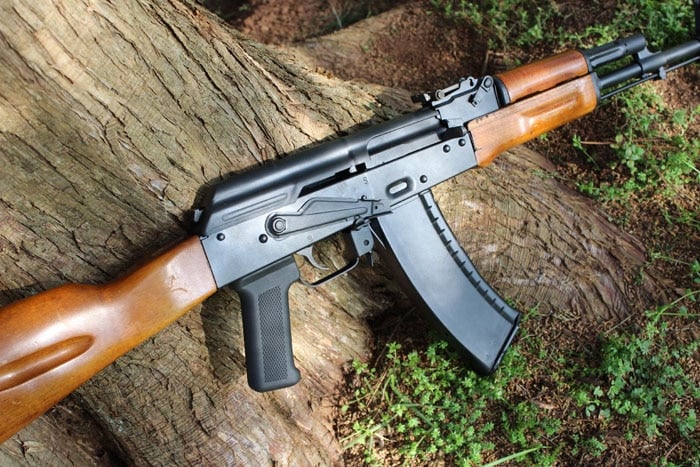 But both of these are manageable.  I look at them as opportunities.  I’ve been corresponding with RRC Firearms and with ARAK, and both have asked that I send the gun in to have the sight aligned properly.  But it is an AK.  If I can’t fix it myself, I’m not worthy of the rifle.  That’s the very essence of the gun.

I’ve read up on ARAK’s reputation online, and the response I’ve received seems to be the common experience.  If problems arise, ARAK stands behind their work and make things right.  But complaints about anything seem rare.

At $900, the ARAK is a great way to get into the game.  If you are looking for a base platform to begin building a custom AK-74, this is a great place to start.  The GunKote  alone will distinguish the gun from most kit built guns. 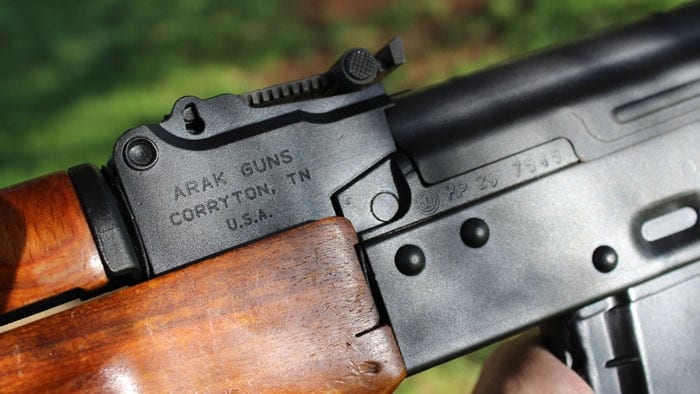 If you are looking for something a bit more historical, than the ARAK has that feel.  It is by no means historically accurate, but it is close.  It has a history.  And you could work backwards, historically speaking, if you really wanted a great working example of the AK-74.  Though the GunKote will always be wrong.

I like it just the way it is.  It feeds my sense of nostalgia, lets me tinker with some basic gunsmithing skills (practice that all shooters need), and it is a really great shooting rifle, right out of the box.