I’m a student of the AK.  I find the Kalashnikov’s evolution far more engaging than any other gun.  The nostalgic side of me likes battle scarred AKs with deeply troubling histories.  The practical side of me likes Arsenal.  If you’re in the market for a new AK, Arsenal should be your first stop.

There are less expensive AKs on the market (and flooding the used markets), but they can’t compare to Arsenal’s quality.  If you have any doubt about this, check the resale market. If you can find one, it won’t be much cheaper than a new one. 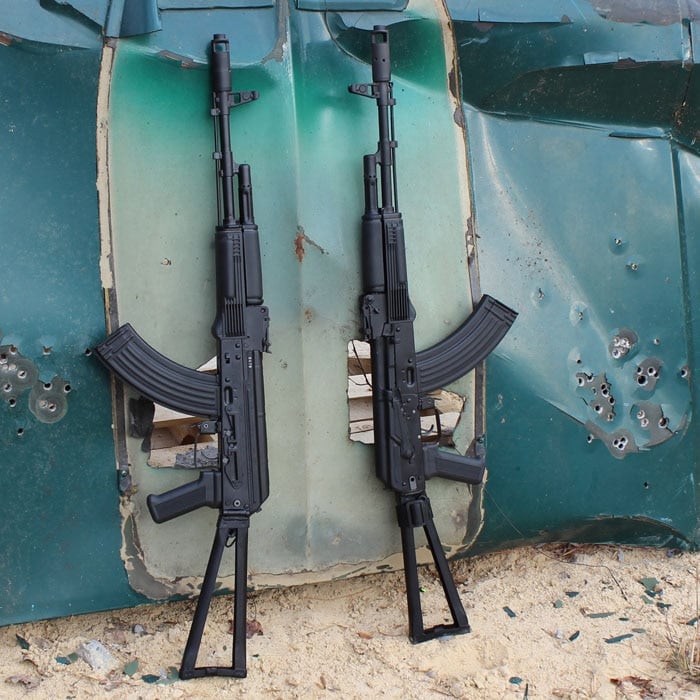 The two SLR107-34s we used for the review. (Photo by David Higginbotham)

All of the SLR-107 line are chambered for 7.62×39.  In that respect, they’re solid AK-47 pattern rifles.  They’re made in  Bulgaria and remanufactured by Arsenal, in Las Vegas.  Arsenal handles the parts swaps needed to ensure 922(r) compliance.

All SLR-107s have 1mm stamped receivers and their original chrome lined, hammer forged barrels.  The trigger group is made in the states, as is the stock set.  The rifles have a solid rear sight that’s supposed to work out past 800 yards, though that seems ridiculously optimistic.

There’s nothing really fancy about the SLR107 line. Arsenal offers upgrades on many of their rifles (better stocks, or milled receivers, etc.) but the 107s are a baseline.  And they’re incredibly solid.  When compared with the features of other Arsenals I’ve seen, the 107s may look a bit plain.  Yet everything you could want on a standard AK is here, they shoot accurately and the rifles are as rugged as anything I’ve seen from Arsenal.

The guns are available through retailers like RRC Firearms (which is where one of these rifles came from) or from K-VAR (who handles a lot of the distribution for Arsenal).

The second set of numbers in the Arsenal titles differentiate all of the various distinctions within the same caliber and country of origin.  So the 107s are Bulgarian 7.62s.  The 34 further denotes that the rifle has something else that sets it apart.  The furniture is black plastic with stainless lining.  The receiver is stamped, as we’d expect.  The barrel has a large muzzle-break which also serves to protect the threaded end of the barrel, and the rifle has a full length gas system.  In many ways, the SLR107-34 is a typical modern AK-47 (except for one functionally cosmetic distinction). 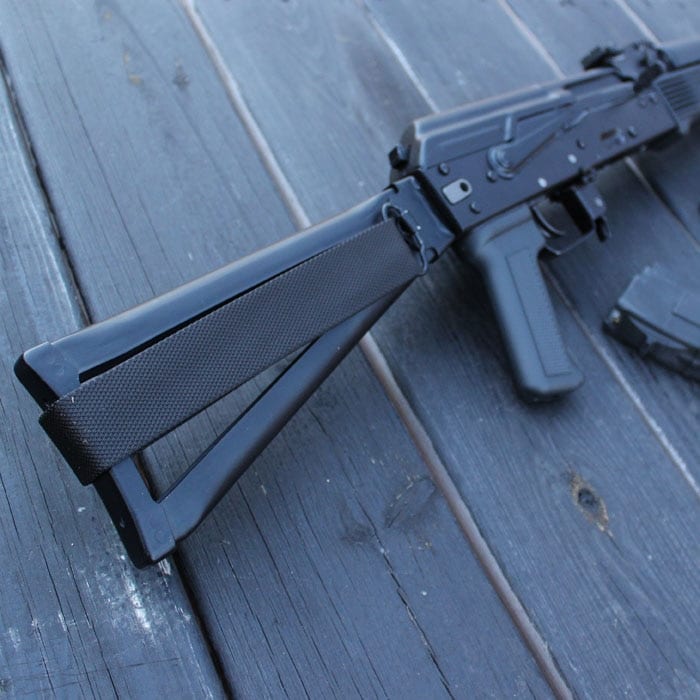 The 34 has a folding steel stock. (Photo by David Higginbotham)

A button at the back left side of the receiver pops in (with some effort) and the stock folds over. The steel framed stock is skeletal and attaches itself at the other end with a spring loaded clasp.  Some of the Arsenal folding stocks can be unfolded by simply pulling them away from the receiver.  This one isn’t as easy.  You have to fish a finger inside the butt of the folded stock, find the clasp and rock it back.  It isn’t as convenient as it could be, but it doesn’t take much practice to get the motion down.

It will fire with the stock folded, so at least there’s that.  The folding stock is especially useful for storage.  If the barrel were shorter, making the whole package truly compact, the folding stock would be an even bigger asset for carrying the gun.  As is, the stock folds, but the folded package is still a long gun.  Folding the stock

Out of the box

The gun arrives with the cutest little magazine you’ve ever seen.  Don’t immediately throw it way.  A nice short magazine like this really helps if you plan to sight the gun in using a vice (which may not offer clearance for larger magazines).

This gun is stiff.  The stock folds over onto the left side of the receiver, but that’s a novelty if you can’t actually press the button that allows the stock to be folded.  I’ve taken to finding a semi-solid object, like the corner of a table, and putting it right against the button and leaning in.  We have two SLR107-34s for this review, both are brand spanking new, and neither can be folded up easily.

But that goes away.  I have an SLR106 with a folding stock.  Though the stock itself is polymer, the mechanism is the same.  The 106 folds easily enough now, after about six months of regular work, that I can engage the button with my thumb (most of the time).  My experience suggests that the 107 will loosen up, too.  If not, it may be worth doing a bit gunsmithing. 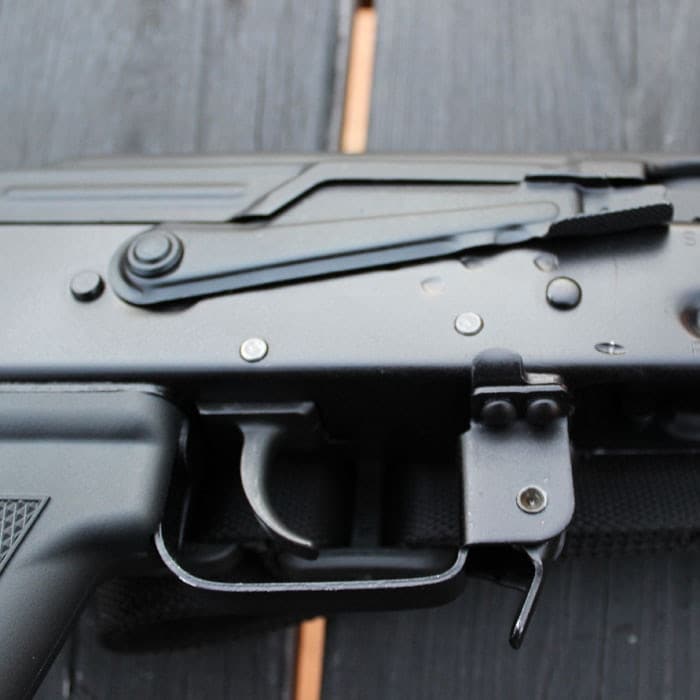 Everything else, though, down to how this rifle was sighted in, was perfect.  Without any adjustments to the sights, the rifle we were sent to review shot to point of aim at 50 yards.  There were scattered pieces of clay pigeons along the edge of the berm from an earlier shotgun shoot and I blew through the first magazine picking off anything larger than a quarter from about 25 yards out to 40.  Even without the logical addition of a red dot sight, the AK is fast and flexible.

After you’ve sighted in the 107, there’s not much use for the small magazine it comes with.  A 10 round magazine can be useful for holding specialty ammo, or for getting prone with a gun like this, but it is so limited in its capacity that it feels like a joke.  AK magazines are easy to come by.  While we all sit around waiting for Magpul to begin shipping their AK mags, we to make do.  Steel magazines are plentiful, and can stand up to any kind of abuse.  They’re worth picking up (especially if you can test fit them in your actual AK to make sure they work, and don’t wobble).  The Bakelite mags, especially the orange ones, look amazing in vintage AKs with wooden furniture, but look odd when paired with black plastic. 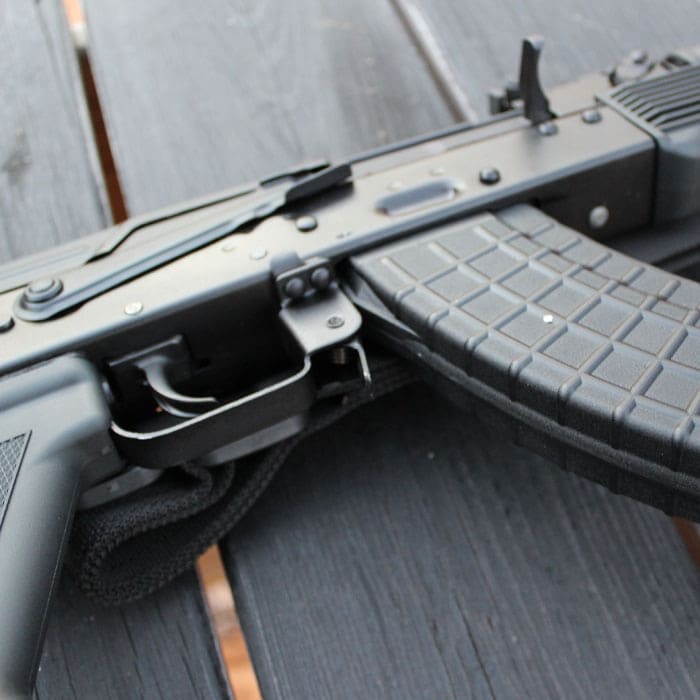 Good fit means easy in with no wobble. (Photo by David Higginbotham)

For this shoot, we ran surplus steel mags, Bulgarian Circle 10s, and polymer mags from both Tapco and Thermold.  As this is an AK, we didn’t expect any issues.  The only one we encountered was how the Tapco mag fit the first time we tried to use it.  The feed-lips were catching inside and we couldn’t pull back the charging handle.  We got it to load by holding open the bolt and inserting the mag, then forcing the bolt home with an old fashioned manual assist.  After we ran through 30 rounds, the mag worked as well as the rest.  It just needed a little bit of break-in.

The two-stage trigger Arsenal is using breaks clean and allows for accurate shots.  The reset is typical of an AK.  I’ve tested AR-15s with better triggers, and I had an ARAK AK-74 in for review that had a Tapco trigger group on it that was very nice, but Arsenal’s triggers are not going to slow you down.  The trigger pull is reasonable and exactly what you want from a battle rifle design.  Mine weighs in at 6.2 pounds.  It could be a bit lighter, but I’m not complaining.  The take up is clean and the break is crisp.

Out to 100 yards, the iron sights are perfectly functional and very fast.  In bright daylight, the black sights are easy to see, even against dark targets (as the sights catch enough light to throw off matte reflections). The black is lost in low light situations, though.  Changing out the front post might be a decent idea for low light scenarios. 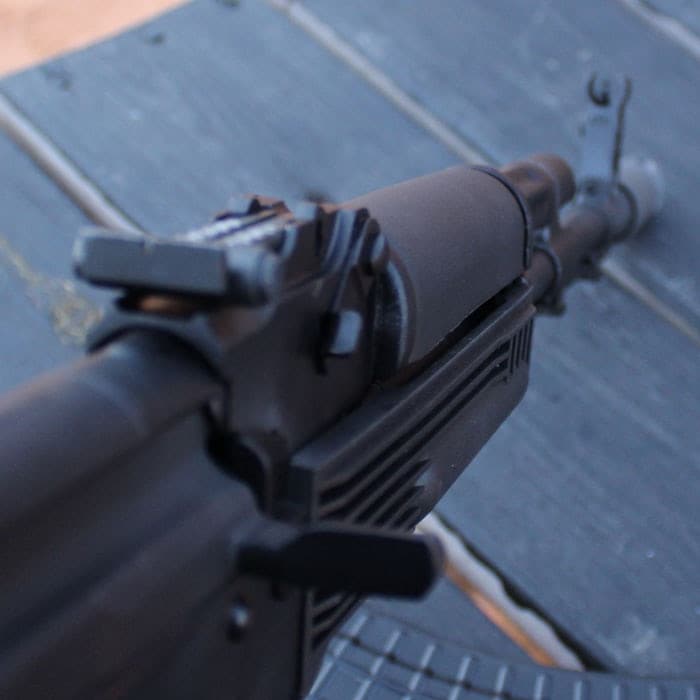 As good as AK iron sights get. (Photo by David Higginbotham)

Otherwise, I have no complaints about the accuracy.  It will shot a 2-inch group offhand at 50 yards.  I can hit what I’m aiming at with surprising precision.  And it isn’t going to fail.

A note about failures

If there was one thing we learned that was unexpected, it is that not all Tula ammo is created equally.  If you watch the videos that accompany this review, you might pick up on a couple of odd moments.  The first is a full on dud.  We were having hang fires at a rate of 1 in 10.  We had one round that didn’t fire and one squib.  If you watch the low light footage, the fire exiting the barrel is really inconsistent.

Something is up with this batch of ammo.  I’ve blown through thousands of rounds of Tula and never had this problem.  I’ve shot everything they make and usually stand behind them fully.  But this batch has real problems.  It isn’t the gun at all.

My love of the AK is paired with nostalgic curiosity.  It has developed into a dedication to the platform.  As much I use and review AR-15s, I’m still an AK guy at heart.  And I’m becoming a dedicated Arsenal fan.  I’ve yet to find one that had a serious flaw.