In 1980 Ronnie Barrett decided to answer the age-old question “what if I need to disable an armored vehicle that’s about a mile away across a valley and also hiding behind a concrete wall?” The answer was the “Barrett Light Fifty” anti-materiel rifle. Originally designated the M82, it was a designed to fire the .50 BMG cartridge with more precision than the Browning M2 machine gun and to be man portable. The model I was lucky enough to shoot was the M107A1 with the CQ or “Close Quarters” 20 inch barrel, a redesigned version engineered to be lighter and stronger than its predecessor. I have to say that the cool factor on this rifle is pretty darn high. Iconic in both Hollywood and Military circles, it is a battle proven power house. In addition to being able to lob a 600+ grain projectile far enough that you need to take the curvature of the earth into account, it’s also designed to be suppressed, another feature that sets it apart from the venerable M82. 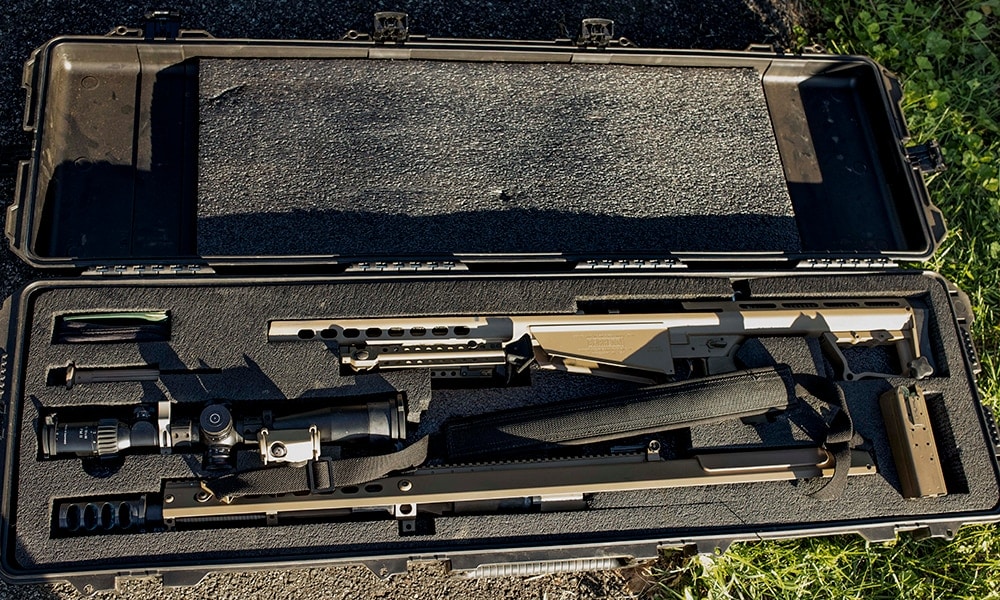 The M107 ships in a very sturdy hard case with good closed cell foam and space for the end user to add cut outs for the accessories they chose to add to their rifle. (Photo: Recom Actual/Guns.com)

Let’s talk briefly about some of the redesigned features of the M107A1 over the M82, most of which were intended to modernize the rifle a bit as well as reduce the overall weight, all without sacrificing performance. One of the most noticeable improvements is the lightweight 700 series aluminum upper receiver, which takes about 5 pounds off the total weight when compared to the M82 and to top it off the new receiver comes with a 23 inch integral optics rail. The 20 inch barrel is fluted to lighten it and Barrett also used titanium in the monopod screw, barrel key, bipod yoke and bipod legs to further reduce the weight.

The bolt was redesigned to be suppressor ready and given a trim as well and both the bolt and carrier are finished in a Nickel-Teflon coating. The chamber and bore are fully chrome-lined to add durability and make it easier to clean. One thoughtful addition is that of a “Thermal Guard” cheek piece that provides some comfort to the user as well as helping protect them from heat and cold. There is also a Sorbothane recoil pad on the stock to keep you from getting beaten up too quickly.

The M107A1 comes with a suppressor ready cylindrical 4 chamber muzzle brake that greatly reduces felt recoil and muzzle movement while firing. The proprietary aftermarket Barrett QDL suppressor also features it’s very own muzzle brake. All together the rifle weighs in at 27.4 pounds. Hardly a featherweight, but very noticeable 5 pounds less than the M82. The rifle ships with an owners manual, one 10 round steel magazine, back up iron sights and that’s it. 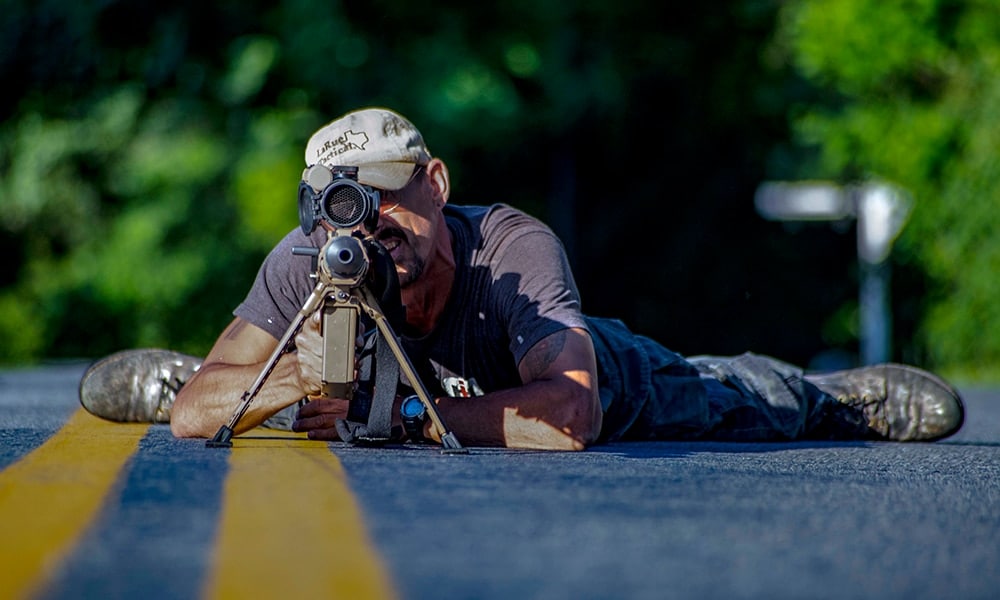 The size and recoil of this weapon are very manageable, even with a shooter of smaller stature. (Photo: Recom Actual/Guns.com)

Being the first time I’d ever shot a rifle chambered in .50 BMG I was a pretty curious about the amount of recoil a round with that much energy would generate. After running through the first magazine I was pretty shocked at how easy it was to handle. I would have to say that a 12 gauge firing a three inch magnum shell is harder on the shoulder. I’m not saying it’s as gentle as, say a 5.45 AK, but it was nowhere near what I expected. The light felt recoil is due to the unique system of springs and buffers built into the gun. The barrel is attached to two large springs that run the length of the upper receiver and upon firing the barrel itself slides backward into the receiver and is returned by the springs. As the barrel slides back it presses on the bolt face and unlocks the bolt, which then continues to the rear and is returned by the buffer spring. All of this leads to a solidly felt but not abusive recoil impulse.

Now I’ll admit something here, I’m probably not the best person to review this rifle as a shooter. Not that I’m completely inept, I just don’t have the long range facilities, or depth of experience necessary to really push this rifle out to its intended operating range. That being said, I still had a great time shooting the M107A1. A suspiciously trusting friend of ours was kind enough to not only let me get my grubby mitts on his rifle but he actually provided all the ammo! When you have a gun that might as well be chambered in 5 dollar bills, that’s no small thing. So after putting up my first born as collateral, off we went.

The range we were using only let us shoot out to about 500 yards, so not even close to the potential range the .50 BMG offers. Once I got used to how the rifle shot, we played a game called let’s see how badly we can beat up all my steel targets. Which as it turns out is only fun for a few minutes. After that I got really tired of having to go set the targets up again and again. At the close ranges we were using the accuracy was pretty great. No trouble at all holding a group around 2-3 inches. This accuracy was in part due to the single stage trigger Barrett decided to put in this gun. While it does break at around 5 pounds, which is heavy in the precision world, it is has light but positive take up, a crisp wall, and positive reset, really all a good shooter needs to get their hits.

I’d imagine that once you get the coriolis effect involved things get a bit more tricky, but lucky for me, and my superior mathematical abilities, I was just shooting across a field not a mountain range. Eventually I had to stop spending my buddies money and we packed it in for the day. 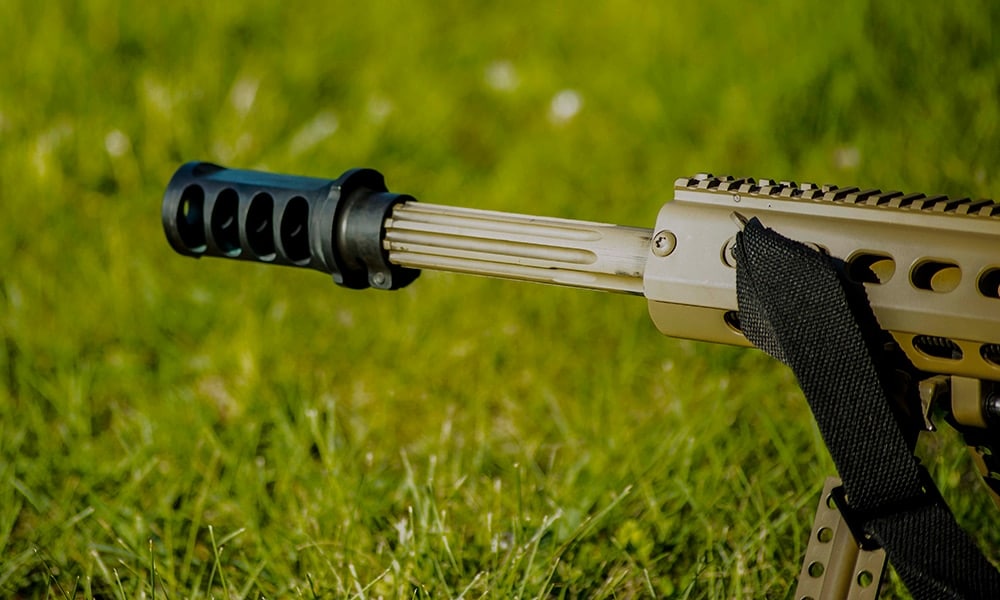 The four chamber muzzle break on the M107 is hefty and really helps tame the recoil of the massive .50BMG. (Photo: Recom Actual/Guns.com)

So, in conclusion, this rifle is almost as much fun as you can have with your pants on (or off I guess, no judgements here).  If you need to stop an APC, get in a workout carrying your gun, re-educate some wayward steel targets, cut down a tree, spend your tax return, or see how good you are at ballistic calculations, well then, this is the gun for you! The price tag may keep it out of many peoples safes, the model I got to shoot came in at $12,281 before shipping, and that is to say nothing of the $6000+ optics that were on this particular gun. However, if you want to have the ability to do pretty much whatever you heart desires with a projectile, without having to get into destructive devices, this really is a great option. I want to say a special thank you to the good people at Barrett who helped me with this article and answered my many and sometimes silly questions. For a company that has so many government contacts, it really shows how much they care about the civilian gun market that they helped as much as they did.