Last March, I was invited to Accokeek, Maryland, to visit the Beretta factory.  While there, I had the opportunity to shoot a number of pistols on their range.  One of the most interesting comparisons came from shooting all three sizes of the Beretta PX4 at the same time.  As instructive as it was, I wanted to spend some time with all three.  But this review will focus mostly on one that deserves a bit more scrutiny.

The Full-Size PX4 Storm, in 9mm

The PX4 Storm has the same attention to aesthetics and function that has made Beretta’s pistol line so successful.  The PX4 is a lightweight, polymer framed powerhouse.  Anyone considering a full-sized, double action pistol should take a look at the PX4 line.

Like most of the PX4 line, this one is black.  The full sized version is 5.5 inches tall and 7.6 inches long.  The magazine holds 17 rounds of 9mm.  Unlike the 92FS, the PX4’s slide is enclosed.  The fit and finish is perfect.  Every aspect of the gun, from the size and length of the grip to the spring tension, seems perfectly balanced.

Let’s start with the gun’s origins.  The PX4 is an evolution of sorts.  While there are clear similarities to the 92FS, the PX4 has much more in common with the Beretta 8000.  The Cougar below is a Stoeger. The Cougar followed the 92FS and had an enclosed slide, was available in .45 ACP, and used a rotary barrel to manage recoil. 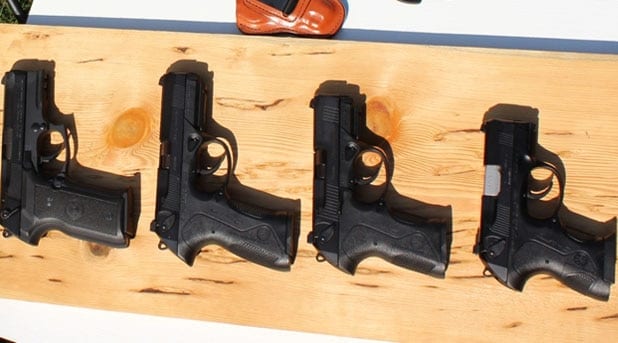 The PX4 builds on that platform.  The standard models are available in 9mm or .40 S&W.  Both are extremely popular rounds with law enforcement.  There is also a .45 ACP version, and a supped-up .45 ACP called the Special Duty.  If the flat black isn’t your thing, Beretta makes a two-tone PX4.  The Inox.  To each his own.

The full-sized PX4 is not a concealed carry gun.  As such, the PX4 doesn’t shy away from its size.  That doesn’t mean it can’t be concealed, but it would be tricky.  This Inside-the-Pants from Blackhawk is a solid holster, and a good choice if you have good cover. 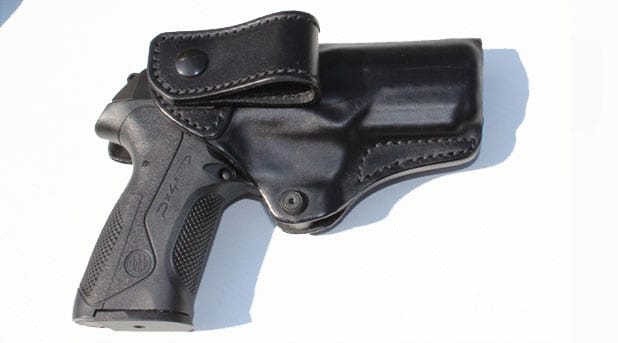 I have a Blackhawk Check Six holster that rides in the middle of my back.  While it prints under a normal shirt, it is easy enough to hide under a coat.  I am differentiating between hiding and concealing.  They have different applications.  If I were going somewhere potentially dangerous, where I thought I might actually need a pistol, then I would take a big pistol.  I’ll probably take a .380, too, but you know what I mean.

Drawing from the Check Six is smooth and fluid.  There is nothing on the gun to snag clothing or the holster.  Even the safety is contoured in such a way that the draw is fast and fluid.

In the full-size model, the rotating barrel eats up muzzle flip.  The gun moves backward, into the webbing of your hand.  While there is still some flip, it is much easier to control than it is in most lightweight 9mms.  This means that repeat shots can happen faster.  I’m not a competitive shooter, but I can shoot the full-sized PX4 faster and more accurately than I can any other firearm I’ve ever handled.  This isn’t hyperbole.  It is noticeable. 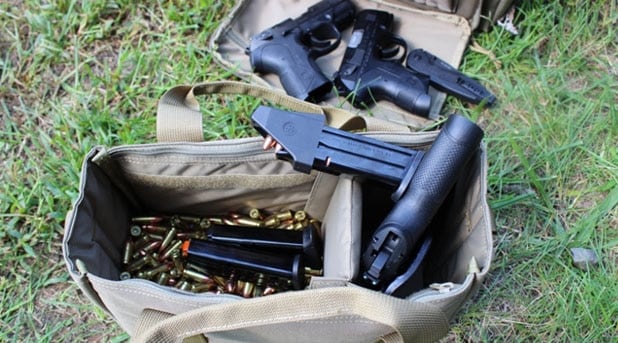 But speed isn’t everything.  And it isn’t the only feature of the PX4.  The pistol’s accuracy is equally impressive.  The full-sized PX4 offers excellent accuracy.  I could empty the 17 round magazine into a silhouette from 25 yards and keep all of the shots on target.  When I slowed down, shots were easier to place exactly at point-of-aim.  My best groups came out over two inches, but they were dead on accurate.  And that’s what makes a service pistol so valuable.

I put more than 500 rounds of Speer Lawman FMJ 9mm through the PX4.  No problems.  No failures to feed or eject.  By the end, after loading magazine after magazine, the PX4 felt as comfortable to me as my old 92FS.  The PX4 fits me perfectly.  There isn’t anything about it that I’d immediately want to change.  Nothing.

I don’t feel that way too often.

For me, the PX4 seems to be two things.  While it is accurate and reliable, the PX4 is also proof of concept.  After the XM9 and XM10 pistol trials, when the M9 was selected for military service, detractors started listing the M9’s shortcomings.  9mm.  Open slide (which supposedly lets dirt and dust into the action).  Fixed sights.  Excess weight.  Whatever.

All of these things were listed as assets at the trials, and continue to work in the M9’s favor.  The open slide allows dust, debris, and empty cases out.  The 9mm was mandated by our agreements with NATO.  The fixed front sight on a service gun that is likely to get banged up is less likely to move.  The weight, while less than a 1911, helps manage the 9mm’s recoil.

The PX4 seems like a logical answer to these (often bogus, sometimes ludicrous) criticisms.  The enclosed slide was easy enough.  And the PX4 is still reliable.  The sights are now replaceable, should you wish to do so.  If you don’t like 9mm, you can opt for .40, or even a .45 ACP.  While the polymer frame lightens the load, the rotary barrel eats up some of the recoil’s snap. 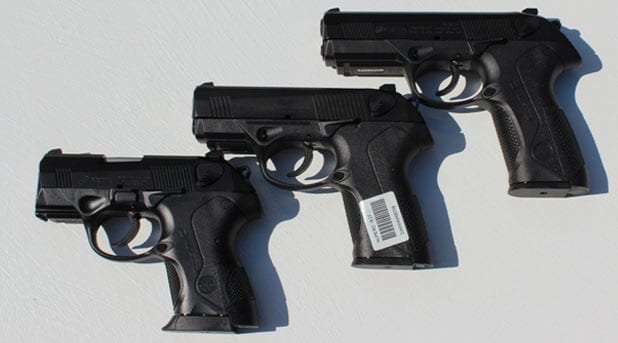 Yet the ergonomics are the same.  The controls function similarly.  The pistol still operates in double action or single action.  And it operates intuitively and flawlessly.

I was talking about the PX4 with a friend of mine this weekend.  We’d been shooting all three sizes for most of the afternoon.  He’s a 2nd Lieutenant in the Quartermaster Corps.  He had the full-sized PX4 in one hand and the compact in the other.  He asked about the relative size difference.  It is subtle.  The barrel on the compact model is close to an inch shorter.  The grip is half an inch shorter.  The round count in the magazine is smaller.

What does the extra size get you?  Tighter groups, a bit farther down range?  Theoretically.  The full-sized version is more of an extrovert.  It would be a bit harder to hide.  But that’s it.  It has more to do with feel, and that is almost impossible to describe in print.

He was holding both, at the same time, so I asked which one felt better.  He extended the full size version.  That was his answer.  It felt better.

And that’s what it comes down to.  The PX4 is a rock-solid gun.  The good folks at the Accokeek, Maryland factory make great guns.  They continue to innovate.  All three of the standard models cost the same.  The MSRP on the PX4 in 9mm is $550.  This may still be my favorite aspect of this review.  $550.  For what you get, that is a great price.