Argentine manufacturer Bersa makes a striker-fired compact handgun that, for some, represents an economical choice for concealed carry and/or light range practice. For others, it represents frustration and at worst, firearm failure in a defensive encounter. 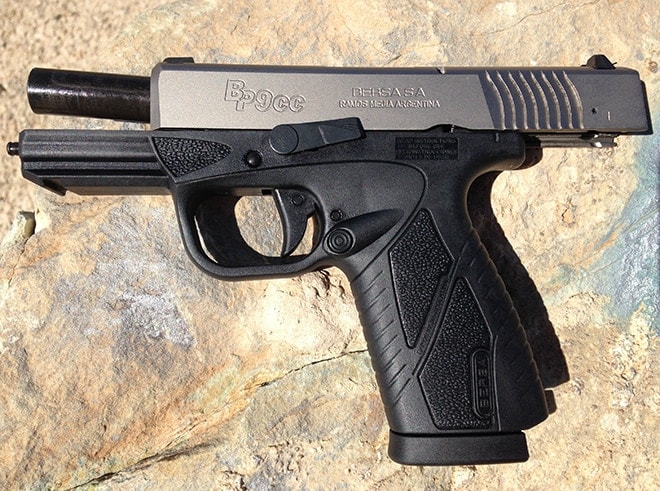 The BP CC looks good on the outside.  The 8-round, single-stack steel magazine, 3.3-inch barrel and slim, flat profile offer ease of concealment while carrying a decent number of rounds.  It’s available in plain black, OD green or black with brushed nickel slide.  The grip is textured to facilitate handling without being rough.

This gun is available in .380, 9mm and .40 S&W.  The model tested here is the 9mm, which appealed to this reviewer as a potential economical competitor to the Glock 43. 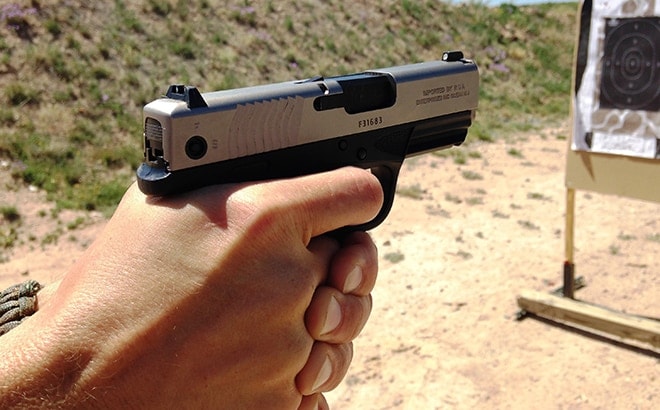 Working the nice trigger on the BP9 CC. Note the locking device on the rear of the slide–an odd feature. (Photo: Eve Flanigan)

There is a locking device on the right hand side of the slide to render the gun inoperable.  This adds bulk and complications that potentially interfere with dependability…and dependability proved to be a problem.

Eagle Imports is the U.S. distributor for Bersa. The Bersa was shipped in a hard-sided case with an extra magazine, manual, the customary cable lock and a tool for locking the slide.  It arrived with a fairly thick coating of cosmoline, which took about half an hour of cleaning to remove. Ironically, even though it was coated with the thick goo, the recoil spring was rusty. 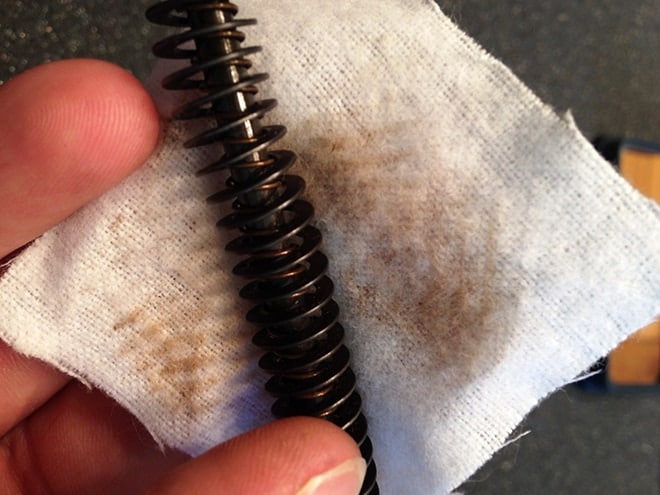 My Bersa BP9 CC arrived with a rusty recoil spring. This picture was taken after a second cleaning. (Photo: Eve Flanigan)

Testing was done primarily by two experienced shooters. A handful of other shooters, from beginner to experienced, fired at least one full magazine through the BP9. On the range, the gun is mostly enjoyable.  The trigger is surprisingly good. The initial press has some slack, but reset is fairly short and crisp. It’s quite accurate, and with both Perfecta and Sig Sauer Elite Performance FMJ, shoots a five-shot group in a single hole from five yards.  We did not test it beyond 15 yards.

Handling of the gun for self-defense purposes is good and bad.  There is no external safety other than the permanent lock that’s only appropriate for storage.  Thus, it’s easy to get into action quickly, but this may also turn off those who prefer added safety devices. 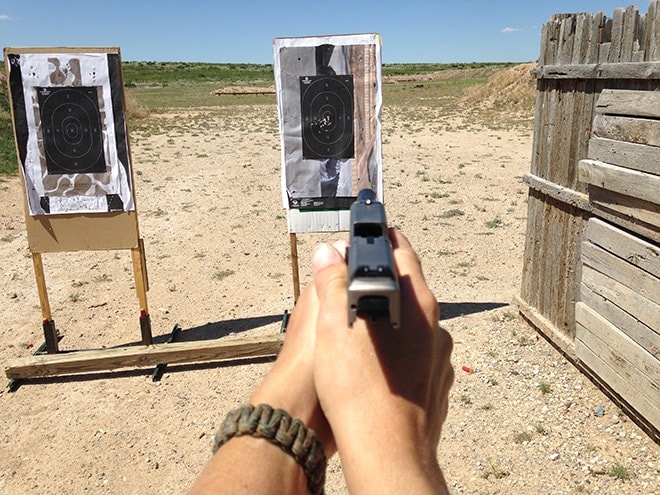 This Bersa is accurate, though a few shooters felt impeded by the molding around the magazine release. (Photo: Eve Flanigan)

The magazines have a flat base that offers decent grip for clearing double-feed malfunctions, and they fall freely from the gun whether the mag is full or empty. The grip-to-trigger distance is shorter than virtually any full-sized pistol, making it suitable to most shooters of any size while still being hefty enough to rack the slide using the desirable gross-motor action. 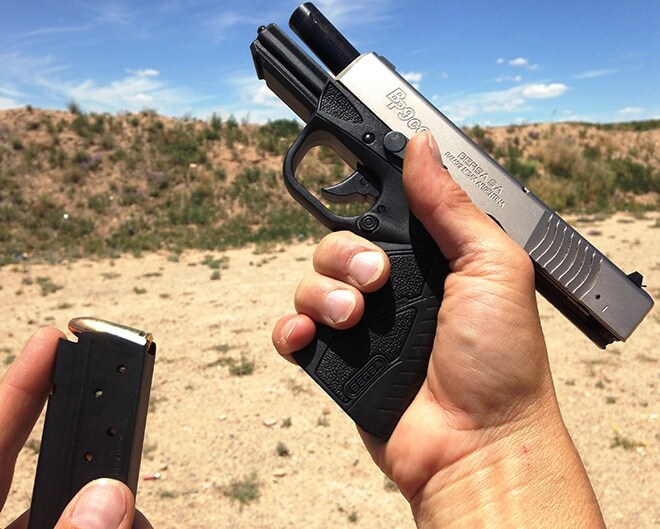 The slide on my Bersa BP9 CC will not close with the magazine removed–another odd feature. (Photo: Eve Flanigan)

Unlike most other semi-autos, the slide on this model will not close with the magazine removed. This includes the takedown procedure. It’s a weird feature that contributes nothing, at least nothing we can perceive, to safe handling.  It also provides an annoying element of trial-and-error even for experienced handlers who pick up the gun to test trigger reset or dry fire.

This BP9 CC was subject to odd and unpredictable malfunctions.  Even with experienced testers whose grip is firm and consistent, double feeds cropped up approximately every 25 rounds.  With one very new shooter whose grip was less consistent, the gun displayed both failures to extract and double feeds.  It is worth noting that other semi-autos of full and pocket size did not display malfunctions with this same shooter. 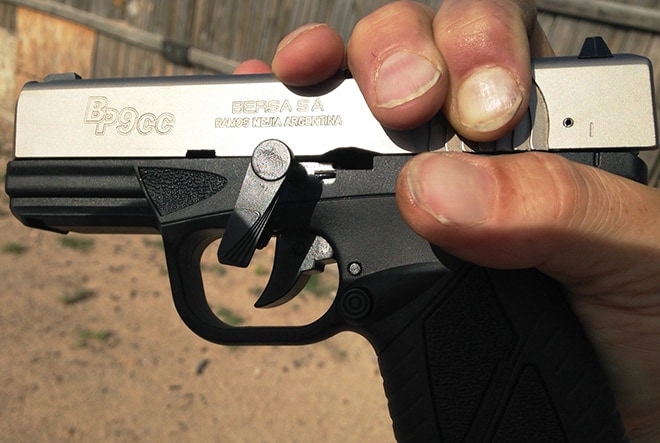 Takedown of the gun is odd. Given the simplicity of takedown that most manufacturers have made commonplace these days, Bersa falls far short of expectations here.  The procedure goes as follows: Reset slide.  Insert magazine.  Press trigger. Remove magazine. Retract and hold slide so hash mark on the left side aligns with hash mark on the frame. While keeping hash marks aligned, push and remove a pin that resembles a 1911 takedown pin. Finally, remove the slide by pushing it forward on the frame.

In keeping with the “odd” theme, the Bersa offered this author’s first (and hopefully last) encounter with a wavy recoil spring.  In addition to being rusty (which was mostly removed with vigorous cleaning), it’s not exactly straight, with bumps and dips along its length.  The outer surface of the barrel is quite rough; its surface dull. One gets the feeling that this firearm missed the machine or person in the production process responsible for a final work-over with steel wool before assembly. 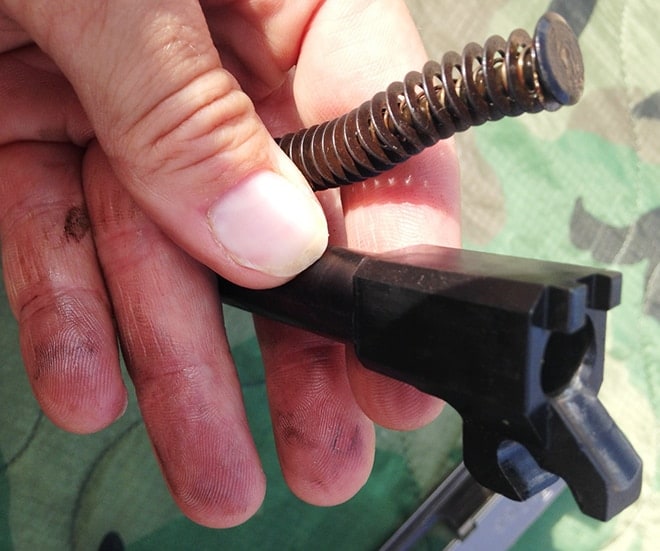 On the occasion of its second takedown for cleaning, a second pin, about the same size as the takedown pin, protruded from the right side of the frame. Being the curious sort, yours truly pulled it all the way out. Suddenly the trigger and its housing were entirely free and easily lifted from the frame.  A friend who’s an armorer of a couple brands stepped in to help reassemble the firearm after I was beginning to feel like “all the king’s horses and all the king’s men” with my personal Humpty Dumpty.

I really wanted to like this gun.  In the days before its arrival to my FFL, visions of mocking my Glock 43 owner acquaintances with this less expensive ($429 MSRP) and awesome eight-round mag-wielding 9mm danced in my head.  The last laugh is on me. Equipment purchased for life-saving purposes should be dependable, at least. The lower-than-average price doesn’t make up for potential failure at a critical moment. 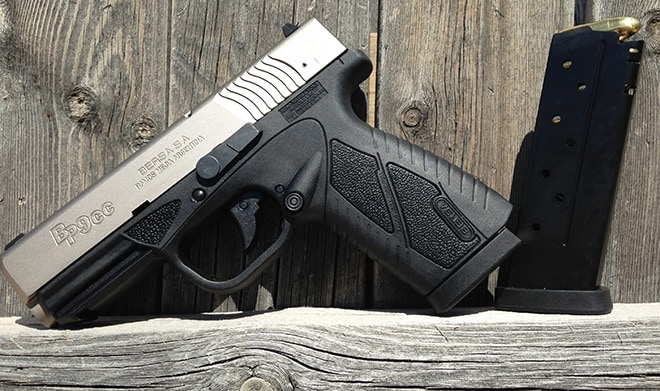 Three acquaintances had sung the BP9 CC’s praises as an ideal concealment and enjoyable practice gun, so its poor performance and shoddy condition upon arrival were a surprise. (They were right about the trigger, though—it’s really nice).  Hence I was puzzled over my less-than-rosy experience.  Seeking answers, I pored over comments posted in social media about this gun. It was soon apparent that this trial isn’t one of a kind.  It’s my educated guess that the BP9 CC comes in two varieties—lemon or lemonade—with no room in between.