The .45 ACP round is a popular one, so it should come as no surprise that this review takes another crack at the caliber: this time with the Bersa Thunder Pro Ultra Compact.

When I announced the Bersa’s inclusion on my list of review kit to my range buddies, I opened a floodgate of opinions. It seemed everyone had thoughts on the Argentinian company and their guns. Among those range-goers the only consensus about the Bersa brand was that there was no consensus.

The love-it-or-hate-it mentality surrounding the Bersa only made me more determined to find out what side I fell on in this gun debate. 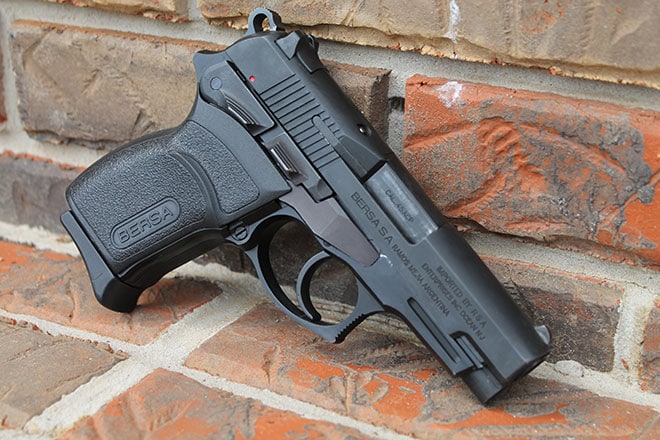 The Bersa Thunder Pro Ultra Compact’s 3.6-inch barrel is fitted on a 6.8-inch frame. Weighing in at 27 ounces, the Bersa has some heft, no doubt to offset the expected recoil when pairing a large caliber with a small frame.

The grip is wide, perfect for larger hands, but a struggle at times for my smaller ones. My saving grace is long fingers that easily reached the trigger nestled inside the trigger guard. The trigger is a harshly curved mechanism that had me leery initially. Preferring a flatter surface to rest against, I wasn’t sold on the crescent shape of the Bersa’s trigger. Luckily, the trigger itself is fluidly smooth. A dream to depress, it’s responsive without coming off mushy or gritty. 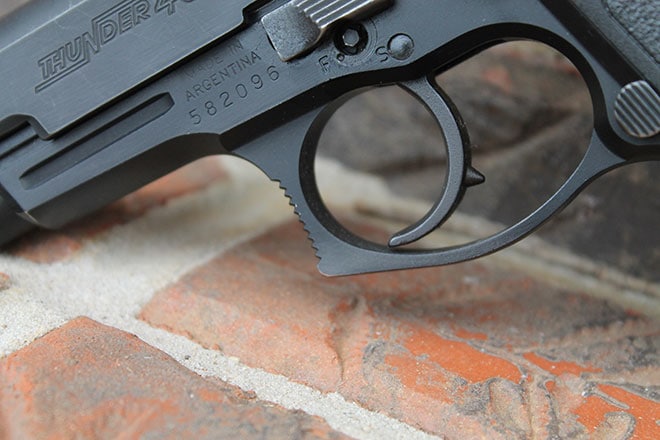 The Bersa is a hammer-fired semi-auto with a de-cocker and manual thumb safety for added security while carrying. Lefty friendly, the Bersa features ambidextrous slide stop levers and magazine releases. In addition, I found the slide and slide stop levers to be extremely easy on the hands and fingers. Whether the ease was due to the mechanics of the gun or the excessive amount of lube has yet to be determined. 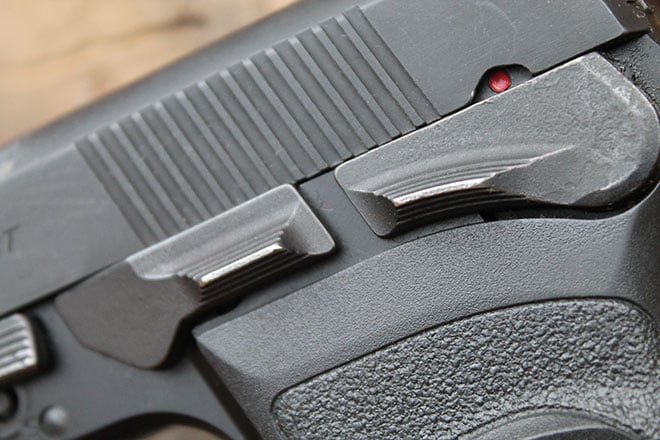 Both the slide stop and the safety are easily engaged. (Photo: Jacki Bilings)

Although an oiled gun is a must to ensure efficient operation and protection of mechanical components, too much oil can be just as problematic.  In the case of the Bersa, the Thunder was slathered in gun oil, attracting every piece of dust, dirt and lint in close proximity.

A good cleaning takes care of the oiling issue but I was disappointed that the Bersa needed such a vigorous cleaning. The issue, though minor and easily corrected, set the tone for this Bersa which then experienced another “minor” issue due to the oil. That problem was also eventually rectified, but still proved to be a bit of a nuisance. 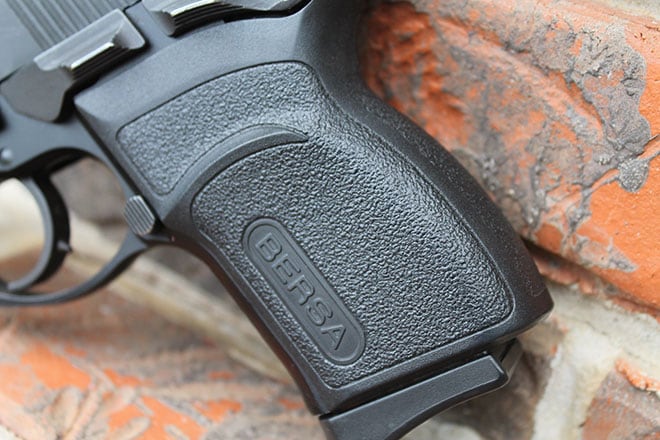 The polymer grip is wide, featuring a subtle texturing that prevents slippage without hurting the shooter’s hand. (Photo: Jacki Bilings)

Mixed feelings often accompany Bersa firearms. It almost seems luck of the draw, with some shooters getting reliable results and others using their guns as glorified paperweights. As I ventured onto the range with the Bersa .45, I wondered what exactly my Bersa tale would be.

As it turns out it came down to one word: complicated. 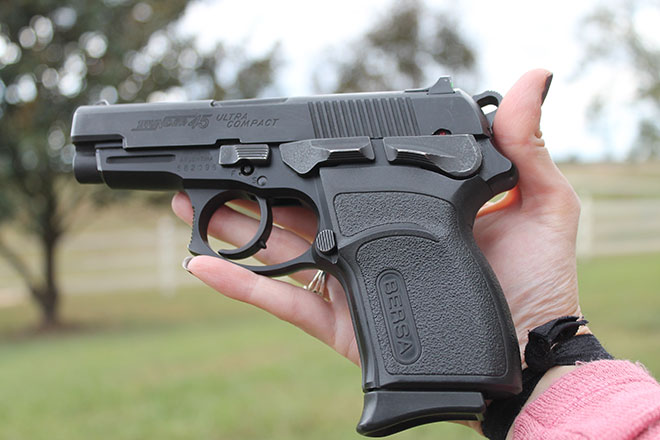 My first shooting experience with this gun was an all-out dud. From the get-go I was clearing jams left and right as the ejector struggled to expend spent casings out of the way before the next round chambered. Time dragged on as every second or third shot resulted in yet another failure to eject.

I give the guns I shoot the benefit of the doubt, so I assumed it was something I was doing. 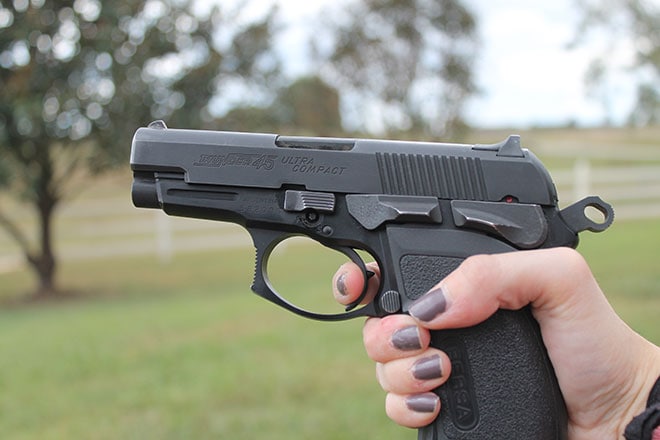 Grip became a source of anxiety during this test but proved to not be the issue. (Photo: Jacki Bilings)

The .45 round on a small gun often means bigger recoil and sometimes that takes its toll. A sloppy grip can mean malfunction; so, in an effort to be fair to the Bersa, I handed her off to another shooter who also carries a Bersa.

No luck I thought, as yet another casing jammed. We set upon trying supported positions to see if maybe the both of us needed refresher lessons in grip. Again, no luck. My shooting buddy was astounded. He’d put thousands of rounds through his Bersa and never had a failure. Why was this one causing such headaches? 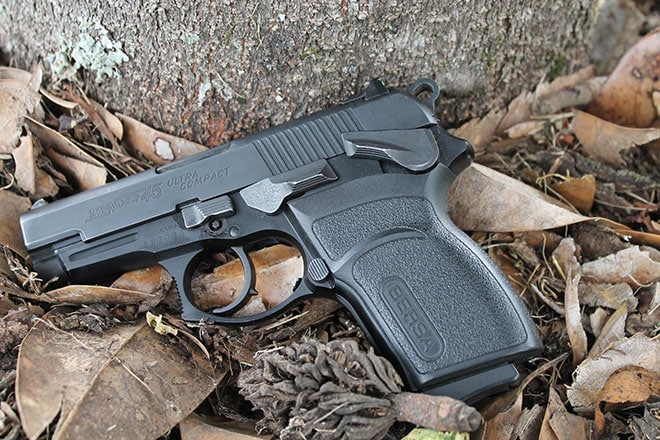 The Bersa, chambered in .45 ACP, feels rugged but is extremely picky when it comes to ammo. Stick to 150 grain for the best results. (Photo: Jacki Bilings)

It was then, in an effort to solve the mystery of the jamming Thunder, I looked to my ammo.  I combed through what I had on hand and noticed a theme. Every box I brought with me was 250 grain. I turned to my range buddy and asked him what he normally shot. The answer was 150 grain.

A quick Google search and quick run for 150 grain, solved the malfunctioning Thunder. Switching out ammo had the gun back to shooting with no issues. That, it seems, was the answer to my problems. 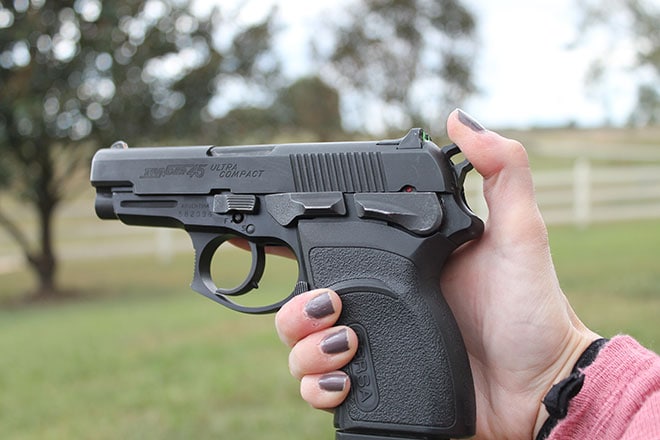 The jamming issue was more than a little annoying on the range; however once that was ironed out, shooting the Bersa was quite fun.

I quickly went through two boxes of ammo before realizing how many rounds I had put down range. The Bersa is that easy to shoot. I chalked it up to accurate sights and the comfortable, polymer grip.

As a female shooter, I appreciate a nice textured area to prevent slippage while shooting; but too often gun makers get overzealous and create texture that is too abrasive. The Bersa strikes a perfect balance in this department. 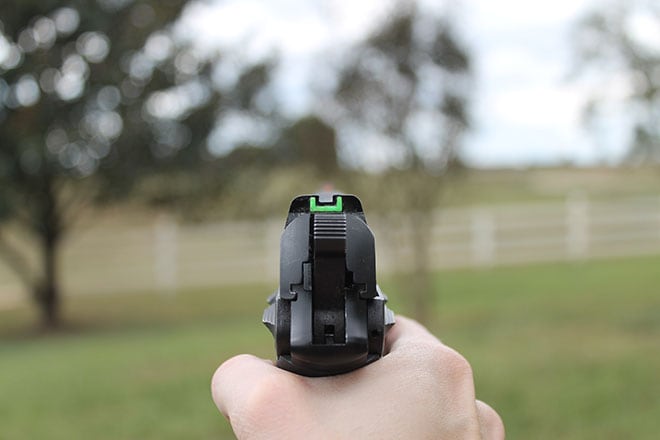 The accurate sights also made shooting enjoyable. With each trigger pull, I knew where I was looking was where my shots would land. After drilling holes through an 8 by 11-inch paper target, I ventured down to the steel target area to try my hand and targets of varying size. I had decent success at 20 yards on a windy day hitting everything from large squares to baseball sized ones. 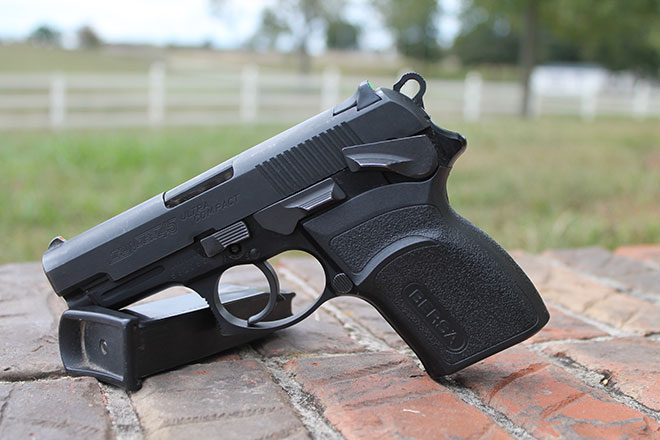 After spending time with the Bersa, it’s easy to see why this gun and its manufacturer create so much debate. In the struggle between love and hate, I found myself floating somewhere in the middle. I wouldn’t relegate the Bersa Thunder in .45 to the trash heap; however, I won’t be carrying it either. I think the Bersa is best left for those that want .45 fun on the range and nothing else.