Last fall I reviewed the Boberg XR9-S pistol shortly after it was introduced into the market. Just recently I had a chance to really help “break in” a pair of Bobergs—to put them through their paces with about 300 rounds of ammo in the course of a very short period of time. Last October I concluded that:

This gun is a winner. It is well designed, and well made. The innovative design makes your brain hurt when you first see it. But the recoil is nothing like what you get from any other “pocket gun”, even when shooting full +P defensive ammunition. Usually with a pocket gun, you trade off the pain of shooting it a lot for the convenience of being able to carry it easily. With the Boberg, you don’t have to make that trade-off. I honestly wouldn’t be bothered at all by running a couple hundred rounds through this gun at the range.

And I did exactly that. Here is a follow up review.

Two guns, or not two guns, that is the question… 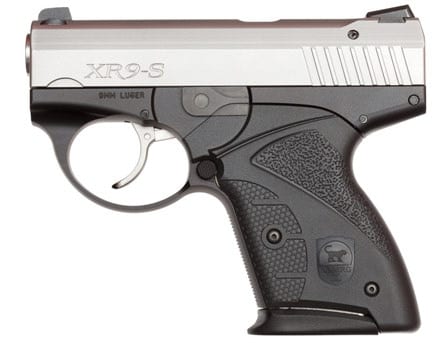 You may be asking: Why a pair of Bobergs? Because my buddy is of the opinion that having two is better than one when it comes to concealed carry guns.

If you can do it, it makes a certain amount of sense. Two identical guns means that you only have to be aware of one operating system. You can carry both guns so that it is easy to draw one or the other depending on the situation (which hand is free, et cetera). Lastly, drawing a second gun is faster than reloading or having to go through remedial action.

There’s also the practical idea of having a second gun for parts, so if perchance something happens to the company then the guns and parts may be hard to come by. I don’t think that is likely in the case of Boberg Arms, but it does happen, particularly to small companies. So, as a hedge, my buddy ordered two of the guns figuring that at worst he’d wind up selling one or both later to recoup some of his investment.

Differences this time out

The first time we shot the Boberg, it was literally a case of taking the gun out of the box, reading the manual as we loaded it and shot it. There was little or no preparation or inspection—we just wanted to see what it felt like. Not something I would usually do, but the gun had just arrived at the FFL the day before and my friend picked it up on his way to visit.

This time was a different matter. The first gun had been cleaned, but not shot again after the last outing. This time we field-stripped both guns, inspected them and lubricated them as recommended in the manual. We opened up the magazines, gave them a quick wipe down and reassembled them. Finally, we opened up a 250 round box of 115-grain target ammo (ball) and commenced to loading magazines.

How did they do?

Excellent. Again, the fit and finish is very, very good, in keeping with what you would expect from a high-end pistol. The three-dot sights are good and easy to use in low light (where we were shooting this time). Accuracy is very good for such a small gun. The best shooter of our small group (who wasn’t with us last time) was able to keep rounds in about a three-inch group at 11 yards. 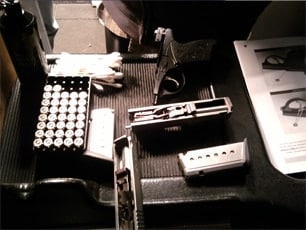 I mentioned in my first review that we had some minor glitches with the gun not going completely into battery. That didn’t happen with the gun we shot previously, but it did happen with the one right out-out-of-the-box. Meaning before it functions at 100 percent, you need to run a few magazines through it.

We ran about 50 rounds through each gun, then took them down and did a quick cleaning and inspection. After the normal light lubrication and putting the guns back together, we didn’t have any problems again with either gun.

Or, I should say, we didn’t have any problems with them functioning again. Like the last time, the front sight on the new gun fell off about 25 rounds into the session. But this time we had brought an allen wrench of the proper size to remount and secure it.

Otherwise, both guns shot like champs. We took turns loading and shooting each gun, one right after the other, until we had went through all 250 rounds of the target ammo and 50 rounds of JHP self-defense +P ammo. When we were done, we again field stripped them and did a quick cleaning and inspection. There was no obvious wear and the guns weren’t very dirty.

Pretty much what I said before: “This gun is a winner. It is well designed, and well made.” And I was quite right about what it would be like to run a bunch of rounds through it: no problem at all. Each of us shot one or the other of these guns about 100 times. None of us had any problems at all with hands hurting or feeling abused by recoil. That alone is astonishing—I know of no other pocket pistol that I would be willing to do that with as a regular thing. With the Boberg, I wouldn’t hesitate for a moment doing it.

I know, like last time, someone is going to complain about a $1000 gun having the front sight fall off. Please—this is a completely trivial problem and one easily rectified by just checking to make sure the set screw is tight before you shoot. It’s one of those little things that should be caught by the manufacturer, but given how well the gun is put together and performs otherwise, I’ll cut ‘em some slack.

I’m more impressed than ever with this gun. In my initial review, I gave it a 4.5 star rating. Now I’d move that up to 5 stars, and wish I had further to go.