Bond Arms of Granbury, Texas is working its way to being an American gun-making legend. The company’s unique interpretation of the derringer platform is like no other. In this test, we look at one of their newer models, the Backup.

Currently, there are 18 models of Bond derringers in production. The flavor of each is like ordering a side of jalapeno with your Tex-Mex meal — boldly western. The typical Bond is flashy, with a stained, engraved wood grip and near mirror-finish barrel. Their construction is a twist on the break-open action concept, with the crux of the frame/barrel juncture being on top. Loading thus entails flipping the barrel up and over the top of the frame. 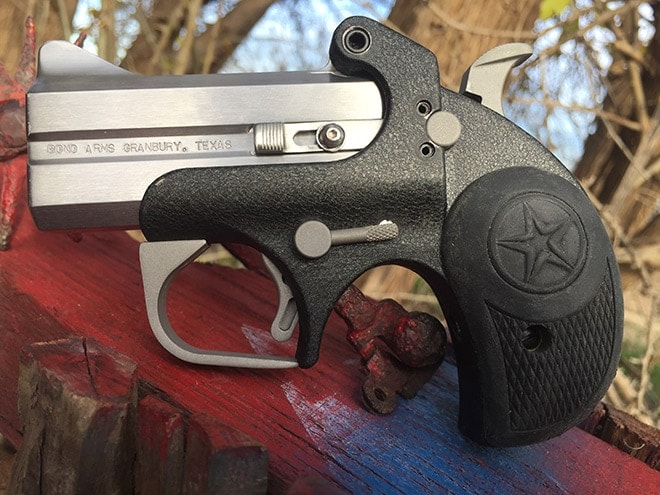 The Backup is a slight departure from the typically flashy Bond Arms profile. It was designed at the request of law enforcement officers who wanted the petite gun as, no surprise, a backup gun. The typically attention-getting, reflective surfaces of other Bond guns just won’t do for a weapon that’s meant to stay hidden. So the family-owned company went to work and created a derringer with a typically Bond profile, but with a high-traction grip and gray matte steel finish. It’s unapologetically Texan, with the iconic Lone Star on each grip panel. But a rounded profile and subtle coloring make this a gun that’s noticeable only when the handler wants it to be. 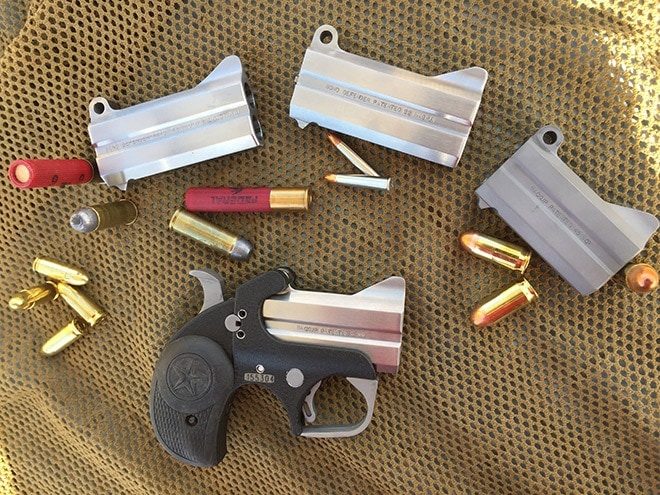 In case you’re not familiar with the brand, that “standard option” bit is stated as such because Bond Arms firearms have a plethora of barrel and caliber choices besides the standard 2.5-inch bead blasted, 45 ACP or 9mm. The brand’s over/under “barrel” is really two barrels in one. So long as an owner is willing to forego the matte finish for some calibers, the choices are mind-boggling.

The prospect of firing so many calibers, both rim- and centerfire, from one gun, is quite exciting. Bond Arms was kind to allow us to sample not only the standard options, but also 45 LC/410, 40 S&W, and 22 WMR during our test. We had mostly 2.5-inch barrels, except for a 4-inch 22 WMR. 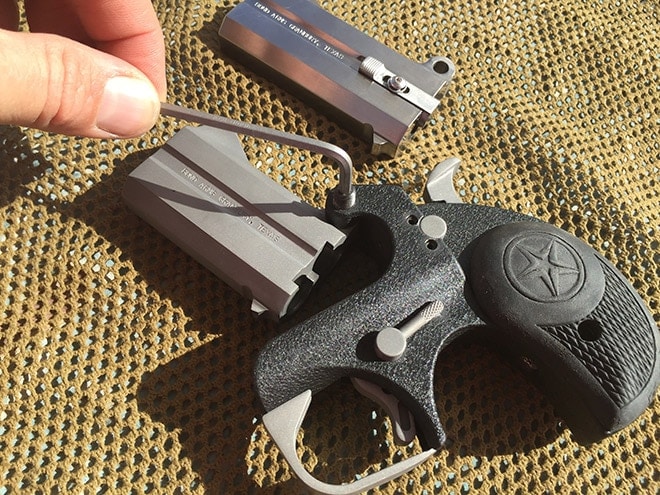 Changing barrels is a breeze. A simple Allen wrench, included with each barrel, unscrews a nut from the frame. Allen wrenches and nuts are all one size. It takes less than two minutes to take the gun from a blazing 45 down to a popping 22. The LR version of 22 is also available, by the way.

Bond derringers fire in single action only. Each barrel has its own firing pin. Brilliant design means the same pin can strike both center- and rim-located primers. 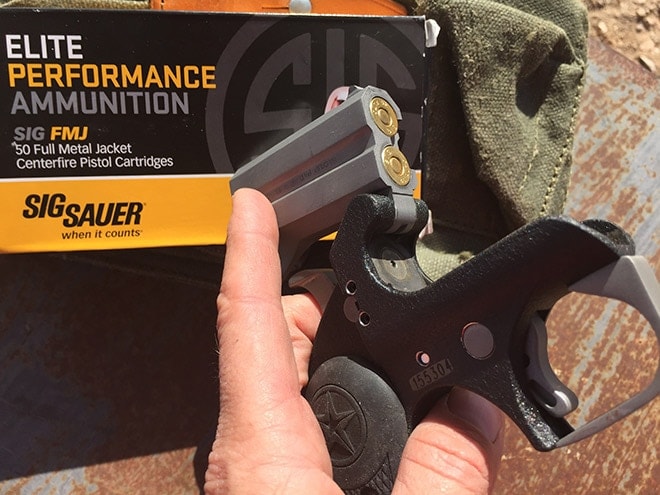 A prominent hammer spur makes the action easy to cock. There is also a crossbolt safety, clearly marked in red in “fire” position. The company admonishes users never to carry the guns in so-called cocked and locked condition, as unintended discharge is still a possibility. That renders the safety a bit redundant, but it’s a comforting feature to those who prefer having one. 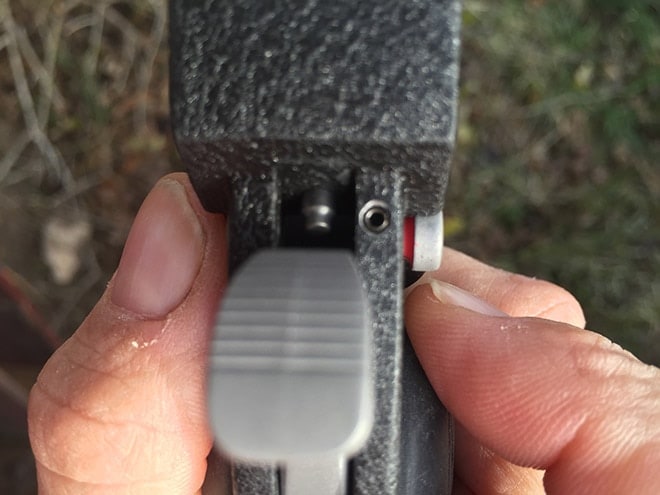 Although it was imperceptible to our testers, the Bond family shooting pros (seriously, they rank at the top of their classes in derringer competitions worldwide) stage their guns to fire the lower barrel first, as a method of minimizing recoil and recovery time before the second shot. In 2016, I had the good fortune to see live demos of their competition-style derringer skills. They’re lightning fast, sending a shot downrange, cocking, firing the second shot, and all the while bystanders perceive only one “bang.” No kidding, it’s that fast—a culmination of human athleticism and gun design. 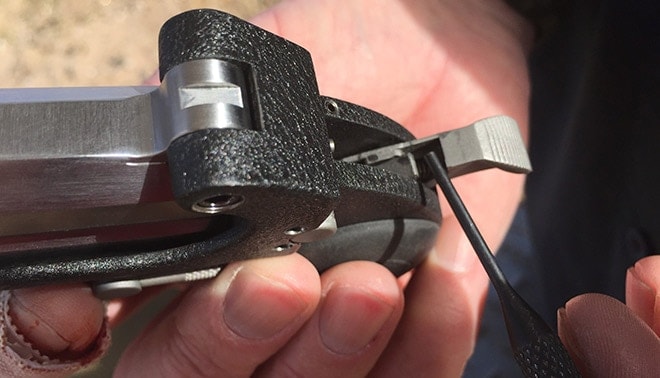 A lever in front of the hammer can choose which barrel fires next. (Photo: Team HB)

For the rest of us, firing the bottom barrel first is a matter of preference. It’s chosen by moving a small lever at the frontal base of the hammer. The lever is rather unremarkable in location and appearance, and we called the factory rep to be sure we were doing it right. This is one place where the downloadable owner’s manual could use an update.

That jalapeno has some bite!

Firing the Backup was a vastly different experience depending on caliber. The calibers beginning in “4” all delivered impressive, actually painful, recoil. The little gun bucks so hard that the trigger guard cut one shooter’s finger on the first shot. But the experience of wielding so much ballistic power in a such a tiny package is one that many shooters relish. 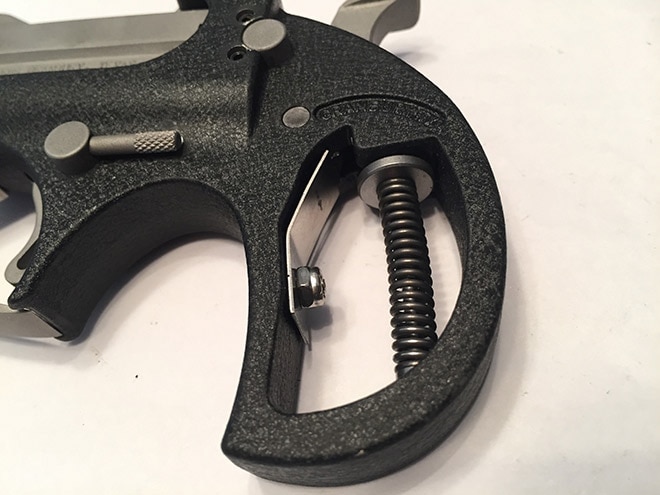 An extended grip, plastic and not rubberized like the original grip panels, is a $59 add-on that many Backup owners prefer. It’s still compact, but offers greater control, especially for large hands. That big hammer spur, in the cocked position, demands a slightly lowered grip from every shooter.

From seven yards, .410 birdshot peppered the entire human-sized silhouette and well beyond. It would be interesting to see if the longer barrel produces a tighter pattern.

It’s notable that the company makes two barrels that fire 45 Long Colt, but only one accommodates shotshells. The more rifled, more accurate 45 LC-only barrel was created as a result of popular demand from cowboy action competitors. 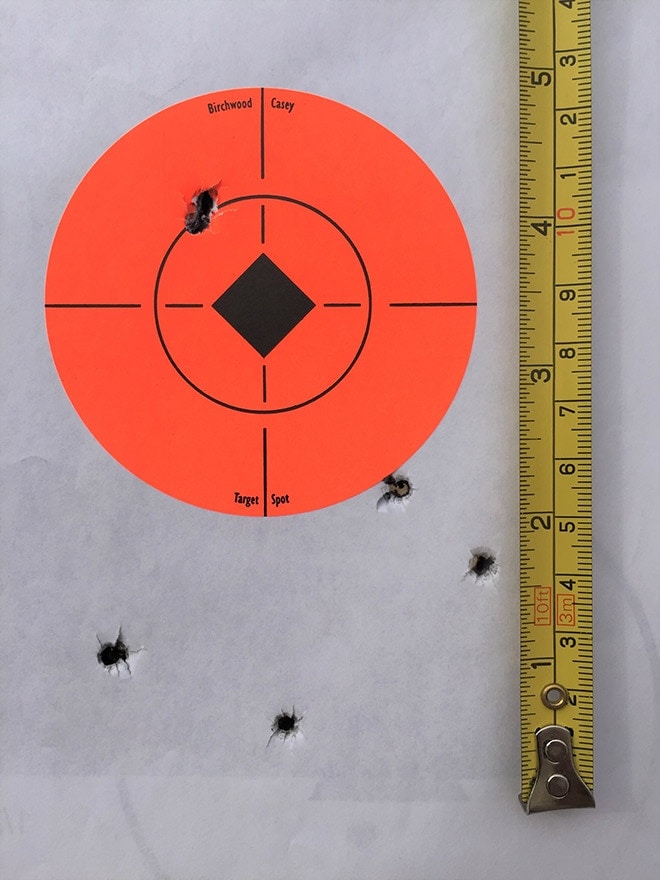 Rounds fired from the bottom barrel, with the sights centered on target from seven yards, hit 2-3 inches below point of aim. They also created clean holes on target. Top-barrel bullets struck about four inches above point of aim. Top-barrel bullets more or less consistently “keyholed” the target, reflecting instability in flight. Upon examination, it appears to me that the top barrel’s rifling is less curved than the bottom’s. That 2.5 inches of barrel, minus the length of the cartridge case, isn’t much room in which to establish spin. That’s not necessarily bad. An unstable round fired at the close ranges for which this gun is designed could well be more effective than its truer-flying counterpart in terms of tissue displacement. I’ll take that as a satisfying-enough explanation.

In 9mm, recoil begins to be manageable, in my estimation. I found myself better able to concentrate on firing and having less dread of recoil with this caliber.

In 22 Winchester Magnum, the gun should be pure fun to fire. However, a light primer strike problem cropped up in about three of every ten shots. Bond Arms replaced the barrel, but the issue continued. During testing, we fired three brands of rimfire, including Winchester white box and Hornady Critical Defense. Light strikes were consistent across brands. Although this is a great caliber for folks who want protection without recoil, it seems some re-engineering is needed for this aspect of performance. We didn’t test 22LR.

Bond derringers take some getting used to in the trigger operation department. When I first tested one of their firearms last fall, my trigger finger pressed, pressed some more, and pressed harder. Soon I was thinking I’d encountered Murphy’s Law and had broken the borrowed gun by virtue of picking it up. 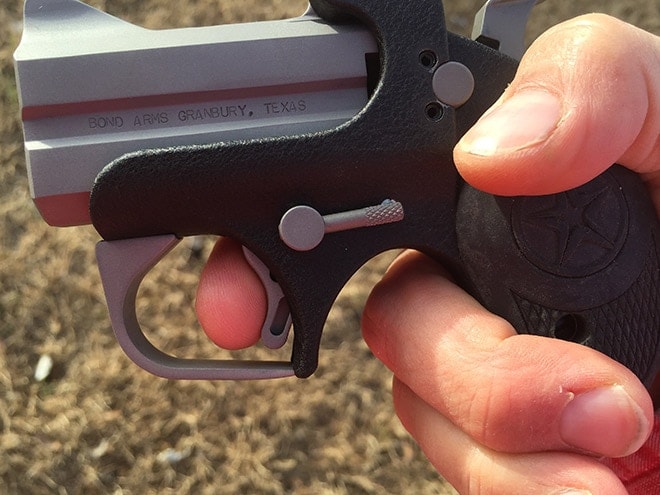 Trigger press takes practice — it moves down more than back. (Photo: Team HB)

A little schooling by a Bond representative revealed the error of my trigger technique with this platform, of which the Backup is a member. The trigger motion isn’t straight back. It’s made to press down and back at once, as if pressing it in the direction of the shooter’s feet. “BANG.” Success. When the Backup arrived in my hands for an in-depth test, I remembered this lesson and had no further problems with trigger operation.

Why choose the Backup? 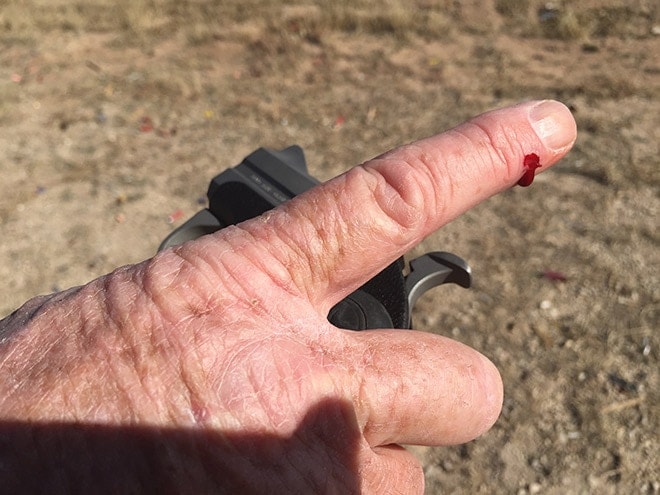 Calibers beginning in “4” caused the inside edge of the trigger guard to cut fingers. (Photo: Team HB)

Bond Arms derringers have a loyal following, for a couple reasons. Some folks love the sheer power of a 45 or 40, but don’t want to deal with the complications of packing a larger gun. Safe inside a sheath, the Backup fits easily in a pants pocket. The 410 option offers confident defense against those slithery, shoulderless offenders that are common in parts of Texas and elsewhere.

And then there’s style. All Bond Arms guns are statement pieces, but this one is subtle, made to be experienced by more than just the eyes. Like a takeout burrito from an Austin food truck, the sauce is inside, and it can deliver a mighty punch.

Buying a little bit of Texas 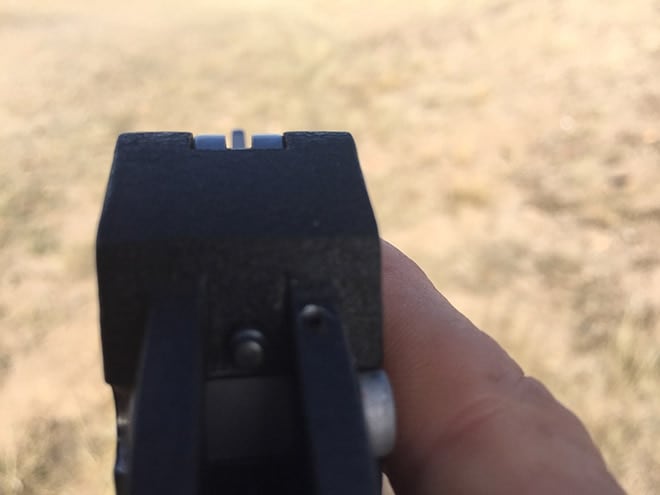 A low profile rear sight is easy to conceal, but not quick to acquire visually. (Photo: Team HB)

Purchasing the Backup in 45 ACP or 9mm will ring up a $490 charge. Additional barrels are priced from $140. At the top of the barrel pricing is the $235 bead-blasted 4.25-inch barrel that matches the Backup motif. That only sounds pricey until one considers that Bond Arms offers holiday specials with 50 percent discounts on some barrel purchases. Top that with the philosophy that a 4.25-inch barrel can make the Backup double as a range gun that’s comfortable to shoot for extended sessions. Even at full price, that’s a bargain compared to a second gun. 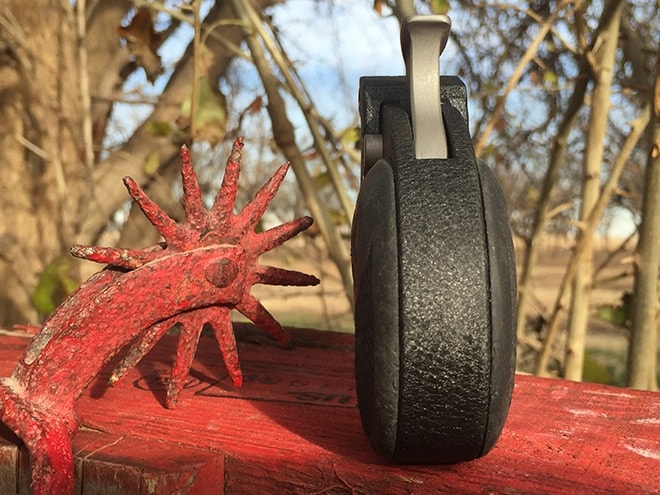 Buyers can be confident that Bond Arms is a family-owned, American business, respected both by industry peers and among customers for solid construction and service. This is not only their reputation, it was experienced firsthand by our testing team as we presented discussion-oriented questions, exchanged barrels, and otherwise probably challenged their patience during this months-long trial. Bond Arms is a company that listens to customers and builds derringers an owner can be proud of.