In anticipation of the new Browning Auto-5 shotgun, which, according to a company spokesman, should be out this summer, Guns.com wanted to give a refresher on what the A5 was exactly.  The original, which launched more than a hundred years ago, was designed by John Moses Browning and has since been manufactured by a handful of companies such as Browning (FN), Remington and Savage.

Although the Auto-5, in all its variants, is only the second best selling autoloading shotgun – second only to the Remington 1100 — with its “hump-back” receiver, the Auto-5 is, however, the most iconic automatic shotgun ever made.

John Browning patented his autoloading shotgun – the first successful autoloading shotgun –and what he called his greatest achievement in 1900.  Like many of his designs, it was innovative.  The long recoil action utilizes springs that are coiled around the magazine tube.  The magazine is under the barrel and holds four shells (one in the chamber adds up to the five, hence the name).  The Auto-5 was made in 12, 16 and 20 gauges.

Then there is the distinctive humpback, although there isn’t a hump in the true sense of the word.  It earned this nickname from the sharp angle the back of the receiver takes towards the stock.

John Browning originally offered the Auto-5 to Winchester, but they couldn’t reach an agreement, so he then turned to Remington.  The story goes that while Browning was waiting (someone kept John Moses Browning waiting?) the president of Remington had a heart attack and since that ended up being a ‘no-go’, Browning then turned to Fabrique Nationale de Herstal in Belgium. 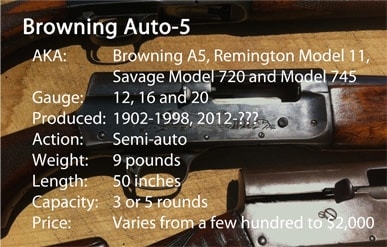 An interesting side note about the FN produced shotguns – the German occupation of Belgium during WWII saw the manufacture of the Browning branded Auto-5s shifted to Remington in the US.  FN took production back once the war was over.

The long recoil action of the Auto-5 was a John Browning innovation.  When the shell is fired, the barrel and bolt travel together to the rear, re-cocking the hammer.  The bolt then is held to the rear while the barrel returns and ejects the spent shell.  The bolt then travels forward and picks up a new shell feeding it into the chamber.

If you have ever shot an Auto-5 and thought it kicked like a mule, it wasn’t set up correctly.  As shotgun shooters know, there are many different loads of shells and some are more powerful than others.  To compensate for the difference in shells, the Auto-5 uses friction rings that control the speed of the action.  A lighter target load will have less resistance from the friction rings than a heavy turkey load.

They also absorb a good portion of the recoil.  Exactly how to set the rings for different loads can be found in the manual, which is available on Browning’s website

If you purchase an Auto-5, before you shoot it, make sure to set the friction rings correctly.  It will save your shoulder and save undo wear and tear on the gun.

Some shotguns fit some people and some don’t.  That’s not the user or the manufacturers fault that is just how it is.  That said, the Auto-5 fits me.  The straight line from the muzzle to the rear of the receiver lines up perfectly for me every time.  It gives a wide sight plane without the need for a barrel rib.

The recoil, on a properly set up Auto-5, is not bad at all.  It is still a shotgun and you will know it, but it is a pleasant hard push.  I have found that at the end of the cycle, when the barrel and bolt are returning home, the muzzle comes back down from the momentum.  I doubt this was intentional, but it does help with muzzle rise.

Not Just Your Grandpa’s Bird Gun

There is still a rather large following of Auto-5 collectors and shooters.  The prices range from a couple of hundred bucks for a Remington Model 11 shooter to thousands of dollars for a high grade Belgium made FN in 16 gauge, the Sweet Sixteen.

I love to shoot the Auto-5s.  From FN manufactured Brownings, Remingtons to Savages.  They are what I grew up shooting. I was about 12 when I was allowed the pleasure of firing my grandfather’s favorite upland bird gun, the big Browning 12 gauge magnum.  I was in love.  Still am.  Maybe it is nostalgia of being in the woods with my grandfather, each of us carrying a Browning Auto-5 or a Remington Model 11. I’m sure that is part of it.  But ultimately these are simply great shotguns that still hold their own. Hopefully that doesn’t change.