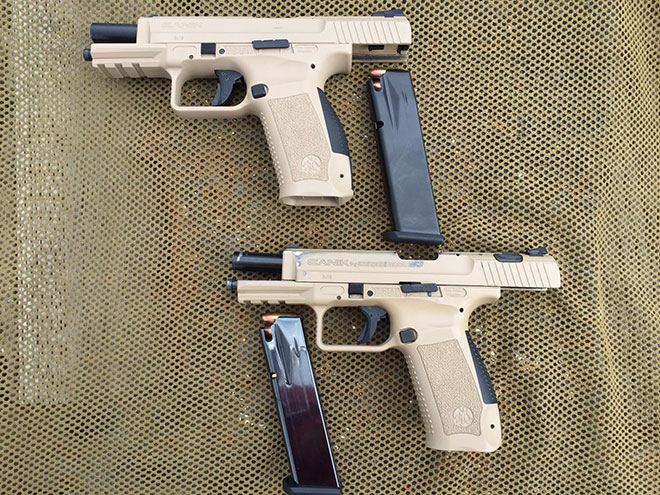 At the 2016 Shooting, Hunting, and Outdoor Trade (SHOT) Show, I giddily laid hands on the Canik TP9SF, the newly introduced successor to the TP9SA, a pistol that has steadily gained popularity among sport, recreational, and tactical users.  A wave of excitement accompanied the discovery that my personal favorite handgun had a new sibling — one that wouldn’t be available to order for a few months.  The differences between the two pistols were detailed then, in my article on the growing TP9 series.

Finally, the time came and the TP9SF showed up at the local gun shop. Off to the range my training partner and I went to compare and contrast our new and not so new Caniks. 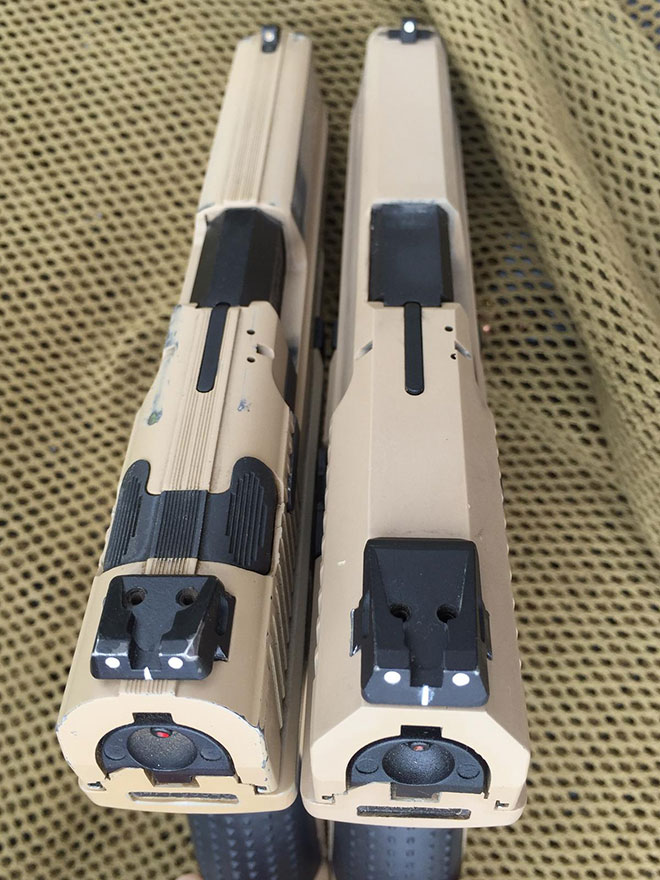 Side by side, top view of Canik TP9s. (Photo: Team HB)

The SF has a slide that’s sloped along its length; the logic being to give the shooter a greater field of view. Nice concept, but I honestly couldn’t tell a difference during firing.

The sights are still three-dot design, but are now interchangeable with Smith & Wesson (rear sight) and Glock in front.  Since sights are usually sold in pairs, this is only a little better than “unicorn” sights with no alternatives, as on the SA. Both are dovetailed on the SF, while the SA has a staked front sight.

Both models have a vertical hash mark in the middle of the rear sight.  This has proven surprisingly user-friendly as I’ve shot thousands of rounds through my SA, as well as regularly handing it to new shooters who are struggling with understanding sight alignment.  I wish I could say why — there’s just something about the little mark that makes alignment, and focusing on the front sight during closer-range work, easy. 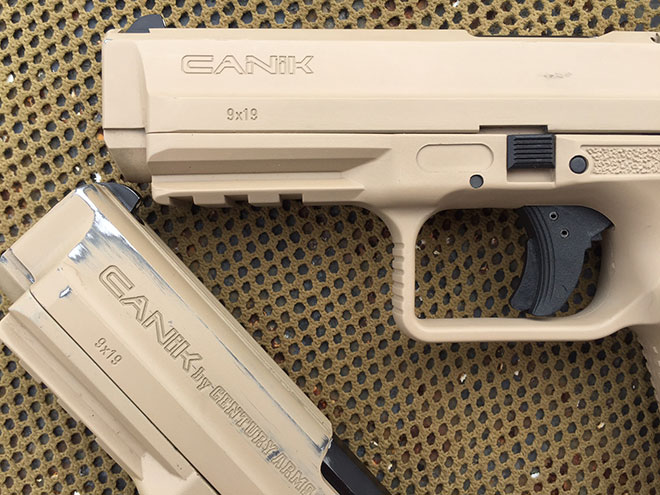 “By Century Arms” is stamped along with the brand/model stamp on the SA.  The SF doesn’t have that phrase, though Century continues to be the US distributor for the Turkish company.

When disassembled for cleaning, obvious differences disappear.  The two pistols look virtually identical “naked.” However, there must be a difference in the trigger mechanism, as that’s one of the places where they differ.

Oh, it’s easy to forget, the SF has no striker decocker.  In the couple years I’ve used my SA hard, I’ve not once used the decocker, nor has it ever been unintentionally activated. It’s a useless, harmless feature.  I’ll admit, I like the touch of black trim it adds to the slide — the SF is a little plainer in appearance because of this.

Both models have two choices of backstrap panel. It makes no difference, but the pin holding the SF’s panel in place is black; the SA’s pin is desert tan.  You have to look hard to see that.

These pistols are available in black or desert tan. As the photos in this article show, the desert tan finish isn’t the toughest on the planet. I look at the holster wear on my pistols as a sort of tangible memory lane so I am fond of its used appearance. Others may feel otherwise.  It’s also a unique shade of desert tan, somehow brighter than most. Of course, this is a disadvantage for a gun that’s likely to be used at night in terms of being reflective of light.  It’s not my choice for home defense, nor would I choose any non-black gun for duty use if my work involved night patrols. 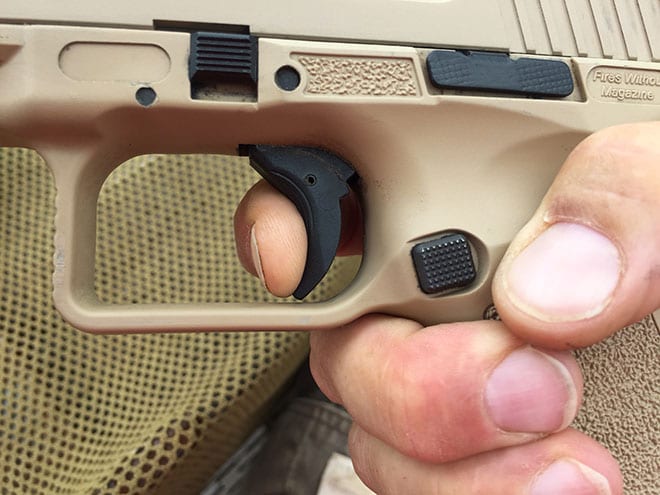 Canik TP9SF has a slightly longer trip to reset on the second click. (Photo: Team HB)

One reason the TP9SA is my favorite is the trigger — where striker fired pistols are concerned, it’s the best I’ve encountered.  That includes one well-known model that costs twice as much as either Canik’s modest $329-360.

I was expecting the SF trigger to be just like the SA’s. After all, it’s the SA’s best trait. I was shocked to find it “locked up” as I fired the first round, and allowed my finger to move forward just far enough to feel what I thought was the click of reset.  Whaaaat?

If you’re familiar with the two-clicks-to-reset trigger that the first crop of M&P Shields by Smith & Wesson had, the one on the SF is similar.  It’s not a long trip to reset, but it is a distracting one.  With training, it could easily become second nature. I prefer guns that don’t require any extra stuff — including physical actions — to operate well.  The trigger was a disappointment. 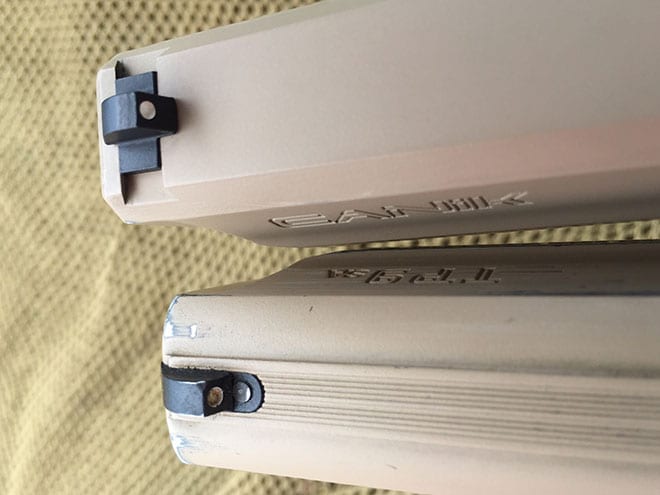 That being said, it’s hard to argue with the SF’s accuracy.  When I stopped kvetching about the trigger long enough to look at the target, I was stunned at the single, small hole my multiple-shot sequence had produced without much effort.  To make sure it wasn’t a fluke, I did it again.  It’s like the darned gun wants to be accurate.  All my research has failed to reveal any difference between the barrels of these models.  The SA is as accurate as a full-size, multi-tasking pistol needs to be.  The SF takes accuracy to an even higher level.

Both models come with two Mec-Gar brand magazines that hold a glorious 18 rounds. The mags are perfectly interchangeable between the models.  One difference that we like better on the SF is its black matte finish.  “Tactical” and “shiny” don’t go together, after all!  Both mags fall freely from the well as they should during reloads. 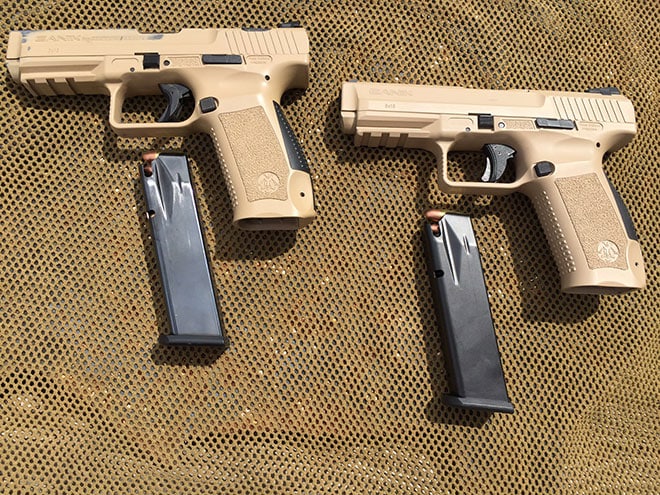 These TP9s eat ammo quite well.  The SA is workhorse and has had only two misfeeds in its lifetime so far.  The SF has a more sensitive stomach.  A feeding issue appears occasionally on the second round fired, regardless of ammunition brand or case material (brass, aluminum). In its relatively short (300 round) usage history, this has become an unsurprising and disappointing error.  We need to test more to determine if it only happens with its original magazines, or also with the SA’s, which would eliminate mags as the source of the problem.

Having had a few friends purchase — and eventually either love or hate their TP9 SA or SF — I have concluded that both handguns far exceed the value of their sub-$400 purchase price.  They’re capable of out-performing other full-size pistols that cost much more, and they fit a wider range of hands than even the Gen 4 Glocks with their adjustable backstraps.

Two friends who purchased these guns — one an SA and one an SF — had to send the firearms back to Century for functionality issues.  The SA had a magazine release that worked when the owner didn’t want it to — during firing.  The SF had firing issues.  To my surprise, Century Arms quickly repaired the magazine issue and issued a replacement SA for the faulty SF.  I didn’t expect that level of responsiveness for a non-American brand.  Their experiences have made me less enthusiastic about recommending the brand — as well as appreciating my own SA even more.  It’s my sincere hope that I didn’t get the well-functioning unicorn of the crop.  Even the ones with issues are better than others in that price range.

If I may say so, Canik would be well-advised to devote resources to quality control, so that every gun in the series functions as well as the ones that passed the 65,000 round Turkish military test, which the company claims both the SA and SF have aced. Buyers are advised to try one of these guns, understanding that it’ll be a cream puff either right away or after a visit to the factory gunsmith.