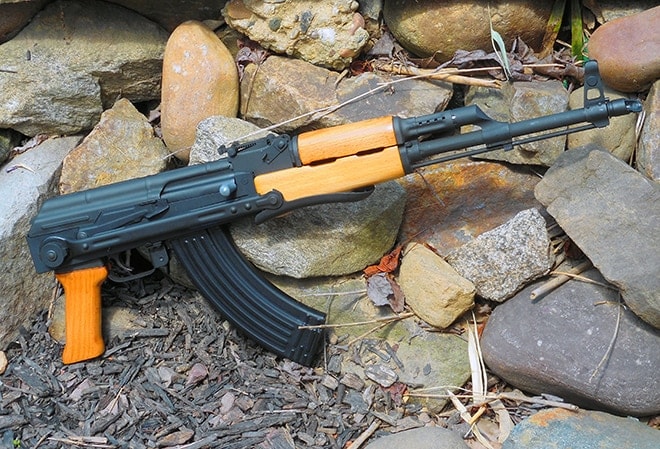 Among American shooters and shooters around the world, AK rifles are most renowned for their durability and reliability but, in the realm of fiction, the underfolder AK rifle has become the iconic weapon of bad guys and ne’er-do-wells. While good guys often receive the latest in military technology—slick MP7s or AR-15s—the villains’ underfolder AKs, with their curved 30 round magazines, contrasting parkerized finish and wood furniture, and Cold War aura that makes you want to hold the rifle over your head and shout “Wolverines!”, continue to look just so cool. Cool enough that even the most All-American Boy will secretly want to have at least one in his collection, despite the hero’s arsenal.

Century Arms knows this fact and they have been importing underfolding AK rifles from a variety of sources for several years now. Currently, their latest offering in the underfolder world is the AK-63D, built from a Hungarian parts kit on an American made milled receiver. Question is, “Does the AK-63D live up to the reputation of the AK legend or, like some in this very large family, is the rifle all looks without substance?

Because of the twin factors of reliability and durability, nations that adopted the AK family of rifles have always been reluctant to replace them with newer designs. Having cast off the shadows of both communism and the Soviet Union, Hungary still remains faithful to an indigenous variant of the AK rifle called the AK-63. While the odd AMD-65 is the more famous of Hungarian rifles, it is the AK-63 which remains the standard for Hungarians today. As with other ComBloc nations, Hungary also adopted an underfolding stock variant for paratroopers and vehicle crewmen who require a more compact weapon, dubbed the ‘AK-63D’. 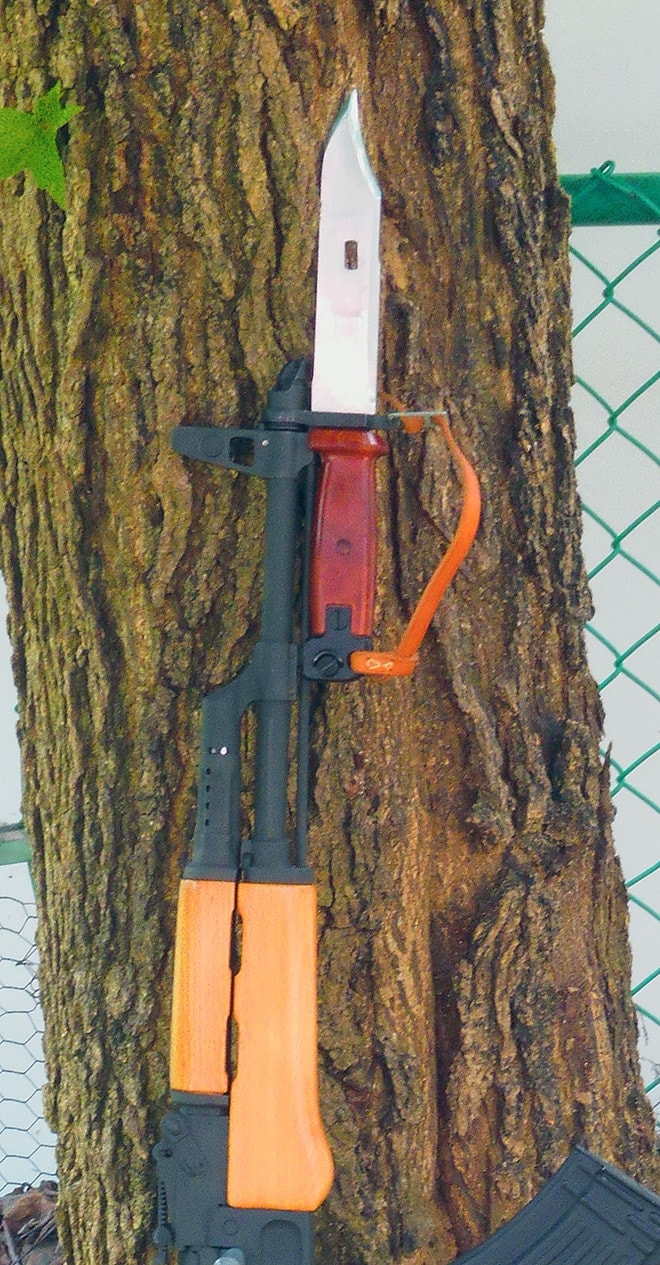 The widely held perception that milled AKs are not only more durable, but more accurate, helps to fuel demand for these rifles, yet this increase in demand was not without  growing pains. Until recently, milled rifles were thought to be the domain of semi-custom rifle makers or high-end production rifles. Prices on examples in America reflected rifles that were costly to produce and hard to keep on shelves. The introduction of Century’s well-received vz. 2008 rifle, the gun that got the company in the game, started to alter that perception.

Yes, I do know the vz. 2008 is not an AK, but that weapon’s production demonstrated that an affordable AK style rifle with a milled receiver was possible. This was soon followed up with the C-39 and C-39V2 rifles. Though the merits of the “improvements” made to the basic AK rifle by the C-39 are still debated by AK enthusiasts, there is no denying that it has been a hot seller at a price point that most shooters can afford.

One problem with the C-39 was the look of the rifle. To the uninitiated, the C-39 appeared just the same as any other AK rifle. To the enthusiast, the C-39 was an abomination (just ask my AK collector of a friend). It lacked a bayonet lug, cleaning rod, and came with an odd looking muzzle brake. The rear sight was an “improvement” that didn’t appear to improve upon anything. The milled receiver could only take milled specific furniture, which made customizing the rifle a difficult task. On the inside the traditional AK trigger was replaced with a modified design from Century Arms. It dispensed with the braided wire springs for more conventional springs, which brought up questions of durability. 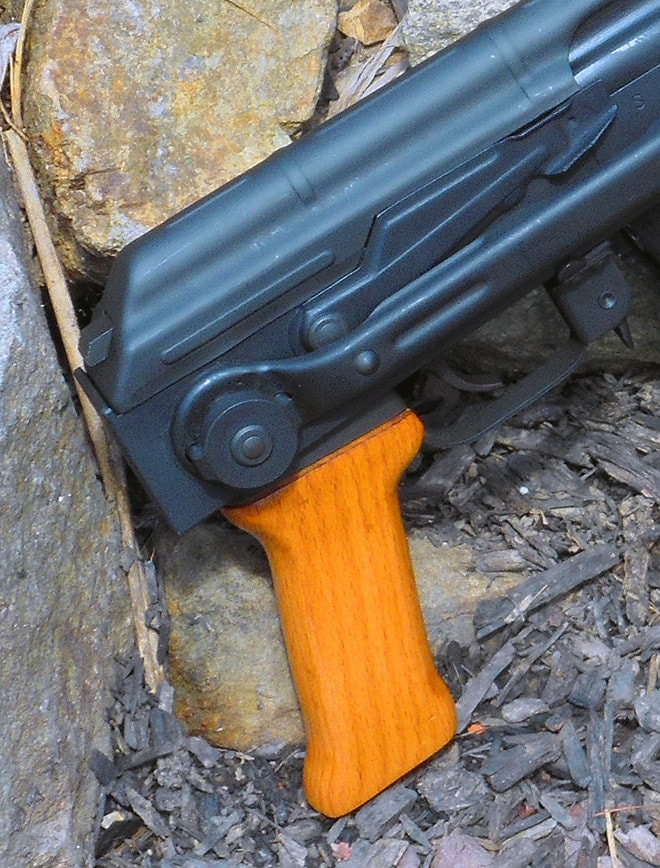 The AK-63D from Century does things differently and a bit more traditionally. As the parts were from a stamped rifle, the receiver has been modified to accept stamped receiver furniture. The bayonet lug, and cleaning rod are also present. The muzzle brake is also the traditional AKM slant-cut muzzle brake.

The trigger is a Tapco G-2 trigger, with braided wire springs. The furniture is also surplus wood furniture, evident by the distinctive Hungarian-style pistol grip. The wood has been cleaned, sanded, and re-finished with a satin polycoat which has a nice blonde look. If it looks too “new” to the AK shooter, it could easily be stripped and re-finished with a more traditional finish of motor oil and axle grease.

The metal surplus parts have all been refinished with a smooth, even coat of parkerization. The attention to the finish of the surplus metal parts does wonders to match the appearance of the receiver. The receiver’s finish itself is superb; with a smooth, parkerized finish that also lacks any sort of milling marks on the outside.

This is in comparison to other high-end milled AK rifles I have owned in the past that had very visible milling marks and cheap paint as a finish. While the original AK-63D was a stamped receiver rifle, I’m certain that no one except for the snobbiest of collectors will care that Century’s offering is milled instead of stamped. 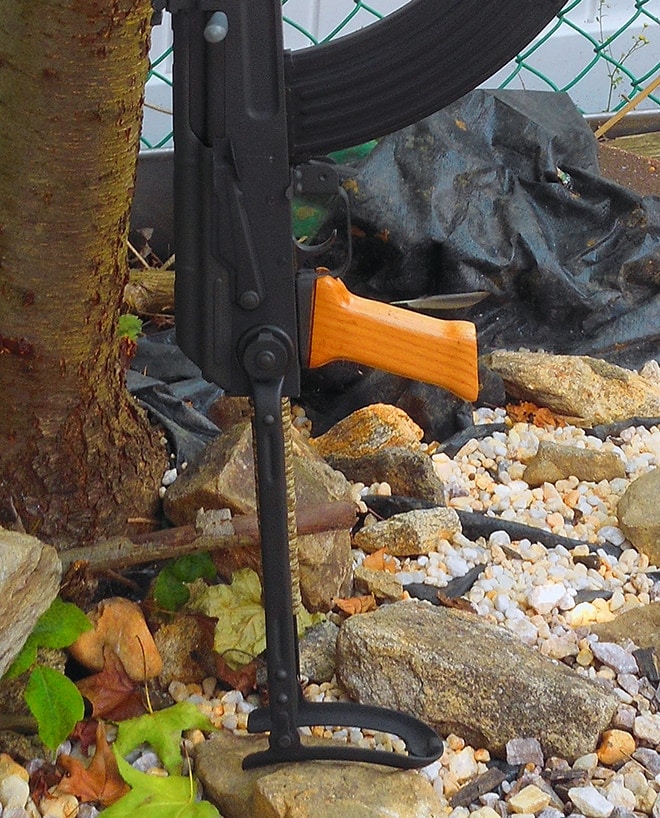 When it comes to accessories shipped with the rifle, they’re about as basic as a Soviet-era apartment: a green web sling, a tin oil bottle, a plastic solvent bottle, and two magazines. Oddly the rifle came with two different magazines; one from Tapco, and the other from Magpul. With the lack of steel feed lips or metal reinforcements being rather disconcerting to me, I scrounged around for some steel magazines. While the Tapco and Magpul magazines may work reliably on the range, I’d rather have actual steel mags for serious work.

When it comes to handling, the AK-63D features those classic Soviet-era ergonomics including the short length-of-pull, reciprocating charging handle, and a safety loud enough to alert the battlefield. While these are often second-nature to seasoned AK shooters, they require a bit of practice and acclimation to the new AK user. As a teacher of mine once said: “Perfect practice makes perfect”. This rings especially true when it comes to magazine changes. If you intend to make this a working rifle, practice magazine changes often.

Due to the nature of the stock, the rifle lacks a traditional side-mounted optics rail. This means if you wish to mount an optic, you’re stuck with installing a scout-style mount on the upper handguard or a railed top cover. This is something that has to be accepted by the shooter should they make the choice to purchase this rifle. 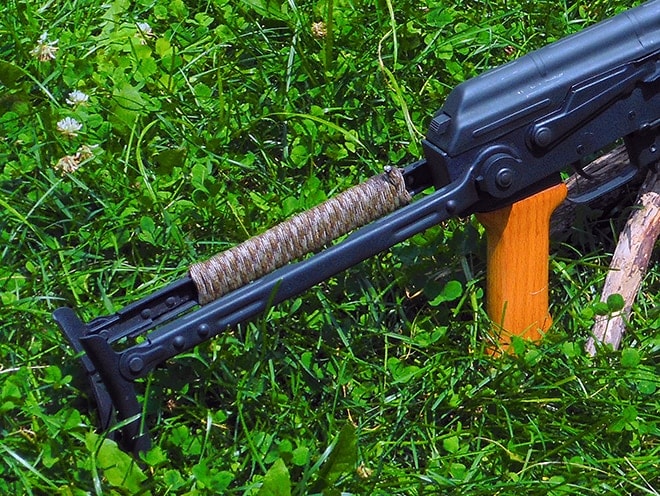 A little paracord can be used to take the bite out of the recoil on the AK 63D, which is a little more than on a regular stock. (Photo: Francis Borek)

The biggest love-it-or-leave-it deal with this rifle is the underfolding stock itself. While it does give the rifle a remarkably compact profile in the folded position making it easier to transport, it doesn’t lend itself well to shooting. However by wrapping the arm of the stock with paracord; it can make the rifle noticeably more comfortable to shoot. Due to the nature of the stock, felt recoil is slightly higher with the wire buttstock in comparison to a regular AK rifle. While the recoil of the 7.62x39mm isn’t high, it might be a little uncomfortable for novice shooters.

On the range the rifle has performed wonderfully, feeding a variety of Wolf and Tula FMJ and JHP ammunition flawlessly. Magazines used were both 30 round Hungarian surplus magazines and 20 round Korean magazines. Both magazines needed some break-in time to make insertion and removal easier. At 50 yards with open sights, the rifle performed as I expected. 2 to 2.5 inch groups proved to be the norm when slow fired from a standing position. However slow firing is nowhere near as fun as rapid fire against rocks and logs infesting the 100 yard berm. With rapid fire, the rifle was easily able to dispatch any target on the berm with plenty of fun and noise. 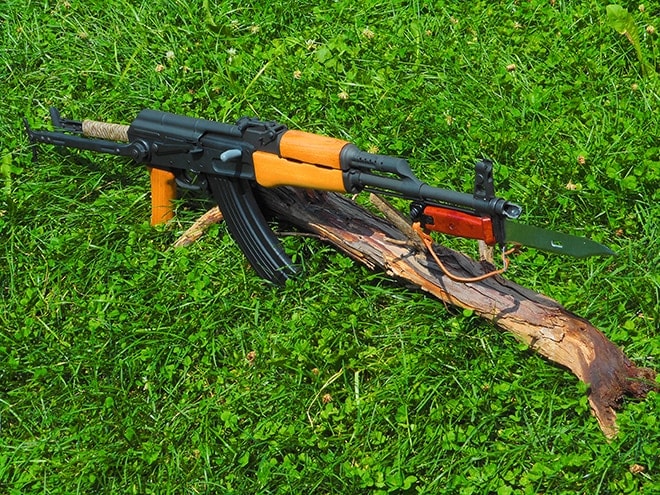 These days shooters interested in a fine and reliable semi-automatic rifle don’t exactly have to put up with Soviet-era ergonomics: there are a wide variety of rifles to choose from for all of their needs. However I am reminded of a phrase that I learned very early on during my time in the Navy: “Perception is reality”. It is a phrase that I’ve tried to explain to many, many civilians over the years with varying degrees of success.

To some people, the only reliable rifles out there are the AK family of rifles. No matter how many videos you show them of AR’s being covered in fine sand and fired with perfect reliability, they’ll never believe you. For some, the perception that nothing else can match the AK is their reality. So why change it? The AK-63D is perfectly suited to fit into that reality and does it with a nice heaping of Cold War nostalgia at an MSRP of $699.