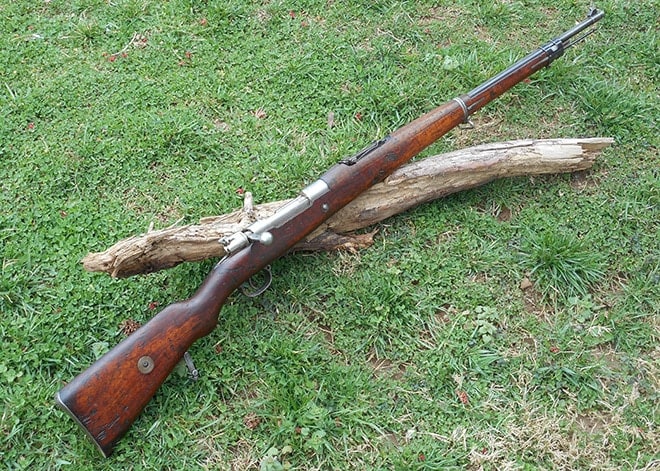 Currently, we are still in the centenary of the First World War (1914-1918) and in the past four years interest in this conflict has risen steadily. This has been helped in part by various forms of media piquing the interest of those who may not have been informed about this incredibly important historical event. And as can be expected, this interest has also crept it’s way into the firearms world.

While gun owners generally have an interest in historical arms, weapons from World War Two usually seem to overshadow those of the Great War, so it’s good to see these firearms get more attention. But with a rise in interest, so have we seen a rise in prices. Rifles that were once $200 are now $400. Four hundred dollar rifles are now $700. It was once accepted that rifles of the First World War would be less-expensive than those of the Second; they were older, and had been rode harder for a longer period of time. There was also little “glory” in the trenches when compared to WWII. No longer the case, there is still hope for the average shooter. Sort of.

The military of the Republic of Chile has always had a bit of a Prussian slant. Even to this day, their parade uniforms include Stahlhelms and elite units still wear Pickelhauben. Naturally their parade rifles are Mauser 98 and 95 rifles and their uniforms are often a spitting image for the German Army.

The 1895 Mauser was essentially an evolution of the epoch-making Spanish Model 1893. Chambered in the 7x57mm cartridge, the rifle and cartridge taught the US Army the importance of clip-loading high velocity cartridges in Cuba. Boer commandos taught the British some hard earned lessons about marksmanship on the veldt of South Africa with the 7x57mm Model 1895 Mauser.

By 1911 however, the cock-on-closing Model 1895 was starting to appear a little outdated and Chile wanted a new rifle. For them the choice was simple: adopt what the Germans have, which was the famous Model 1898 Mauser. Indeed, the rifle that Chile adopted was essentially the same as this the 1898 Mauser — though with a few changes. It was dubbed the Modelo 1912.

First and foremost of these changes, the Modelo 1912 was made by Waffenfabrik Steyr of Austria instead of by DWM/Mauser Oberndorf of Germany. Additionally, the same rifle Chile ordered was also sold to Colombia,  Mexico, Ecuador, and even China bought a few. 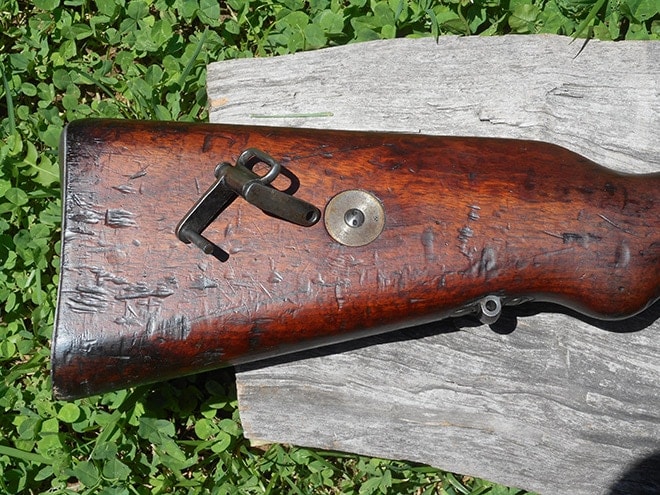 It dispensed with the complicated and expensive Lange-Vizier rear sight for a simple tangent sight. The upper handguard also wrapped around the rear sight. Gone also were the grasping grooves on the stock as well as the stock washer for bolt disassembly. In it’s place was an acceptance stamp on one side of the stock, and a unit disc on the other.

Very wisely, Chile retained the 7x57mm cartridge. It had already proven itself to a be flat shooting cartridge with low recoil. But perhaps most importantly, Chile already had large stocks of the cartridge and would save money by retaining it.

When World War One started, the Austro-Hungarian government purchased the large stocks of Modelo 1912 rifles that Steyr had yet to deliver. The rifles were modified slightly by having the rear QD sling mount replaced with a large standard sling swivel to accommodate the M.95 Steyr sling. The rear sling swivel is really the only way to differentiate between a Chilean and Austro-Hungarian service rifle. 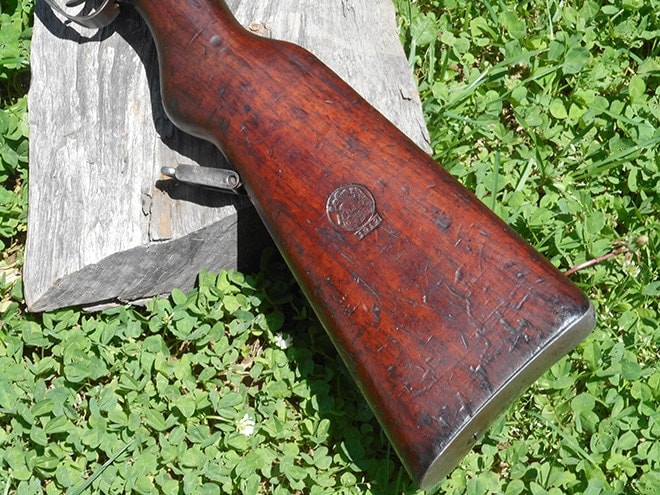 The Chilean coat-of-arms and the manufacture date. In this case it’s 1912. (Photo: Francis Borek)

The service of these WWI rifles is hard to pin down. Some say these were only issued to rear-echelon soldiers and militia. Others say these rifles were issued to both Austro-Hungarian and German troops who fought together on the Italian Front to ease supply and training issues. Some say they saw combat against Russian and Romanian forces. Regardless, the majority of the Modelo 1912s in the US are Chilean issue.

Despite it’s length and weight, the Modelo 1912 still handles quite well on the range. The extra heft soaks up recoil better than shorter rifles. Although the straight bolt handle is a little awkward at first, a shooter can quickly become used to it. As one would expect from a pre-war Mauser, cycling of the action is slick, though if cycled without authority, the action can stick or bind.

The 7x57mm cartridge is a great fit for this rifle, as it produces less recoil than the 8x57mm or .30-06, while also being a rather flat shooting round. For first time shooters, the right 7x57mm can both provide the excitement of shooting a “big-boy’s” cartridge while also ensuring they do not go home with a sore shoulder. The trigger is worth mentioning — although it is rather heavy (as can be expected from military rifles), the break is quite crisp for a 105-year old gun. 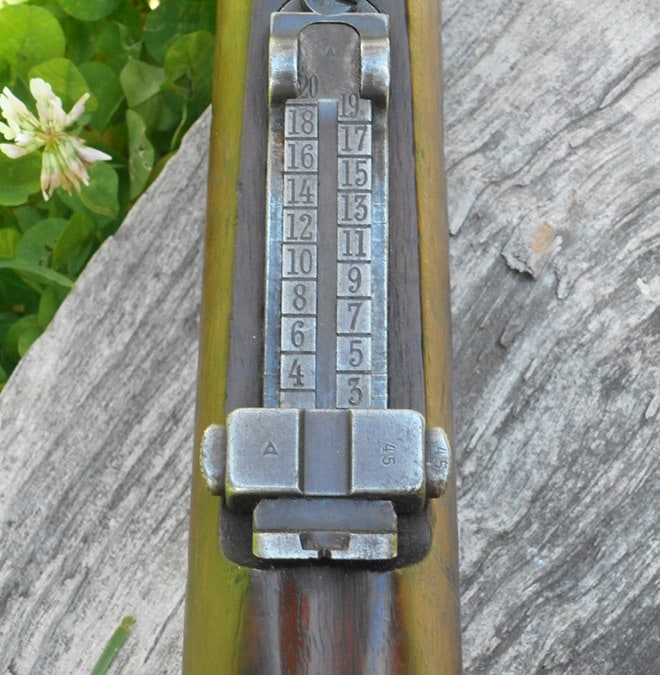 Graduated from 300 to 2000 meters, these sights are tough to use. (Photo: Francis Borek)

On the range, with PPU manufactured 139 grain ammunition and my own handloads, the rifle shot consistently high and to the right. The primary limiting factor with this rifle, and indeed the majority of vintage military rifles are the sights. Typical for old Mausers, the rear sight is a narrow V-notch with a pyramid front sight. Though rather poor, they can help you appreciate just how far firearms have come in design and that these days most shooters take optics for granted.

Over the years these Chilean Modelo 1912 rifles have been imported to the US in batches. Recently a large batch came into the country, imported by the now defunct Samco Global Arms. With the collapse of that company, its assets were put up for auction and the Modelo 1912 rifles were purchased by a number of distributors. 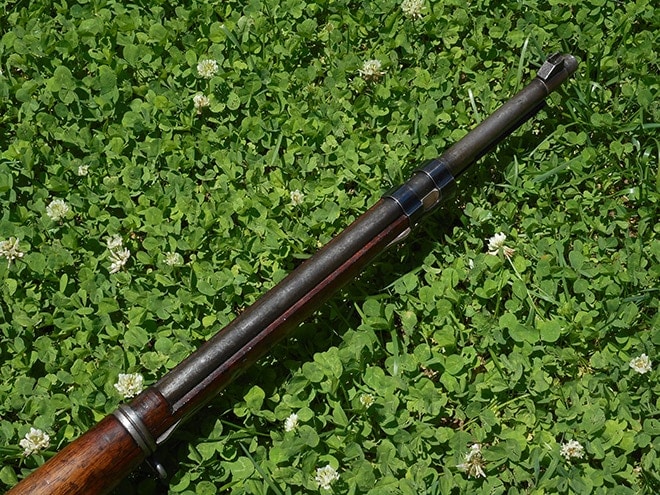 Worn bluing from decades of use. (Photo: Francis Borek)

This rifle is long and heavy and will probably be considered a bit of a handful to a new shooter or a shooter who is used to shorter and lighter pieces. The old walnut stock will doubtless be covered with the dings and dents from a century of use and often stained a dark red thanks to countless coats of oil from over the years. Likewise, the bluing on the barrel and other parts are usually pretty worn. 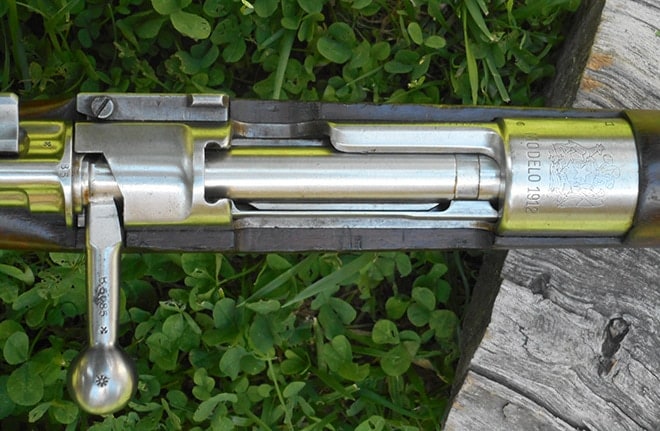 The bolt and receiver were originally finished in the white and engraved with the Chilean coat-of-arms. If either the bolt or receiver are blued, then it was refinished. Despite the evidence of age, the bore on my example is in good shape and mechanically the rifle is fine. This is typical. Also present is the quick-detach sling swivel. Although a common find, the leather sling on mine has rotted away.

Some Modelo 1912s were re-blued over the years by gunsmiths and amateurs in the United States. One point of note is that several rifles were re-barreled in 1961 for 7.62x51mm with the bolts and receivers blued in Chile. These rifles will be marked ‘MODELO 1912-61’ on the receiver along with ‘NATO’ and (sometimes) ‘7.62 N’. 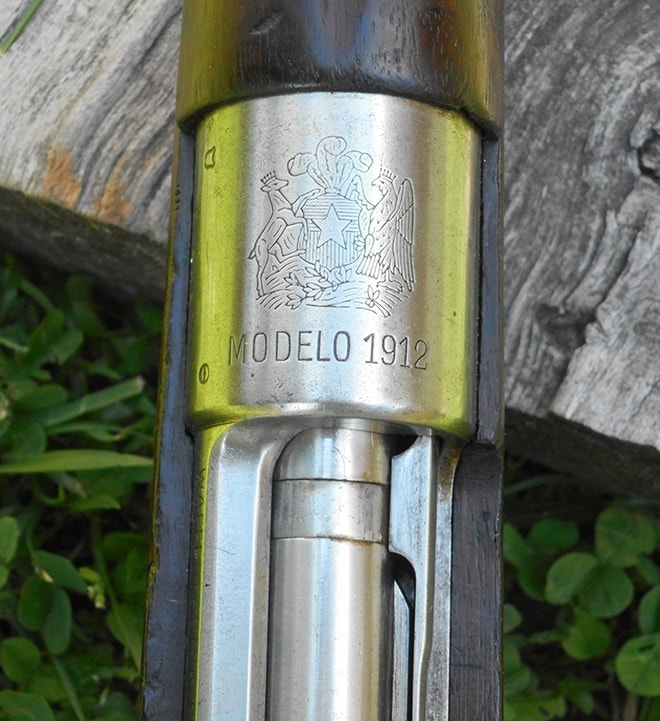 It’s becoming a bit more difficult these days to acquire a genuine rifle of the First World War. Many have been lost to time, or to the hacksaws and sandpaper of the kitchen gunsmith. In that sense these Chilean M1912s have a tremendous value as both an ersatz WW1 rifle and as one heck of a shooter thanks to the excellent 7x57mm cartridge. I picked this one up from a local gun store for the price of $199. An excellent value for great example of what military rifles used to be.