Gun Review: The Good, The Bad, and the Cimarron 'Man With No Name' Conversion (VIDEO)

I’ve been growing out my facial hair and chewing on cigarillos for weeks now in anticipation of this review.  But it isn’t working.  No matter how I try, I can’t get that clenched-jawed sneer that defines Clint Eastwood’s Blondie.  But I have his gun. Well it isn’t his, exactly.  But it’s damn close to the bastardized Colt’s 1851 Navy used by many of the characters in The Good, The Bad, and The Ugly. Today we call it the Cimarron Man with No Name Conversion.

Man With No Name Conversion

This is a .38 caliber six shot cartridge revolver in the old cap and ball style made by Uberti for Cimarron Firearms.  The barrel is 7.5 inches long.  The barrel is blued, and the frame is case hardened.  The grips are walnut.

The fit and finish is good—better than good considering this isn’t supposed to be a display-case sort of weapon.

There are a couple of oddities.  For one, The Man With No Name Conversion has a really nice rear sight.  It also has a faux loading lever which hides a removable pick for popping out brass from the cylinder.  Why?  We’ll get to that.

It feels good.  Better than good.  I have always liked the feeling of these early Colt revolvers.  Their heavy barrels aren’t balanced well.  This isn’t the fast draw Cowboy action gun that Sergio Leone pretended it was—but it is fun to pretend.

The hammer’s spur is rough.  This makes cocking the gun super easy.  It makes fanning shots much less rewarding, as you will shred skin off of your palm in the effort.

The trigger on the gun I have is very light.  It breaks under five pounds.  That, combined with the length of the barrel and the easy to use rear sight, makes this more than a novelty.  The gun shoots straight.

But what is it, exactly?

The answer to this question isn’t easy and it may get somewhat convoluted.  Follow me through this. Let’s begin with the Man With No Name Conversion’s origins.

The 1851 Navy was a cap and ball revolver that worked well—so well that, as Americans made the transition from black powder to brass cartridges, the 1851 was converted to shoot the new ammunition. 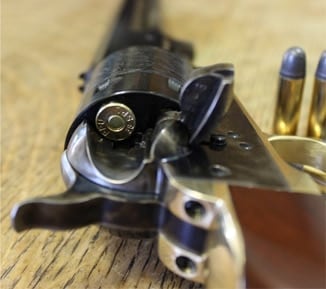 After the Civil War, two Colt employees, Charles Richards and William Mason, were instrumental in designing Colt’s conversion guns.  Their guns are noticeably different from The Man With No Name Conversion.  The loading lever, for one, is gone.  And the barrels of later models have a slightly different profile.  But these guns weren’t on the market until well after the end of the war, and way later than the historical period of The Good, The Bad, and The Ugly.

Did anything like The Man With No Name Conversion ever exist?  I’m not sure.  The reasons why are complicated and have more to do with Remington’s patents on bored through cylinders.

I think The Man With No Name Conversion is, when separated from its cinematic legacy, nothing more than a really cool historical anachronism.

Others disagree.  An unnamed source on the Internet Movie Firearms Database suggests that The Man With No Name Conversion “is actually historically correct-first conversions were made in 1859, and .38 Short Colt was invented at beginning of Civil War.”

I’m having trouble backing that up.  Actually, I think it is bogus.

Also, in the same paragraph, there is another revealing bit of information that I think is more accurate.  “Throughout [The Good, The Bad, and The Ugly],” the source says “it becomes obvious that if they [Blondie, Angel Eyes, or Tuco] have a cartridge revolver, they are going to fire it in the scene. In any other scene, the revolvers change to unloaded percussion models.”

Think about it this way.  Percussion revolvers would have been much more common during the era in which the film is set.  Yet black powder blanks are more dangerous, as they often require a wad that is still propelled from the gun.  Blank cartridges are made by crimping the brass to contain the powder—so less junk flies out of the barrel.

So it is safer to shoot blanks from a gun that looks like a percussion cap revolver.  The unloaded percussion guns are easier to visually inspect on set.  Safety first. 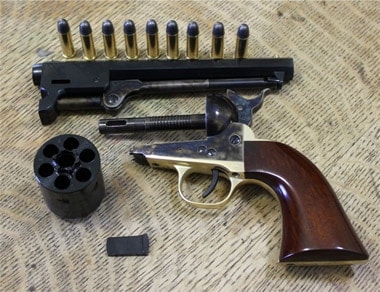 But movies write their own rules.  And they alter history willy-nilly.  So the question of did this gun exist, or not is less important, I think, than simply looking at the crazy cinematic history of the weapon.

The Good, The bad, and The Ugly was filmed in Spain and Italy.  The Italian’s have a long history of firearms production, so it made sense that they might copy some of the iconic designs of the American West for use as props.

What began as a cottage industry to support the movie business grew into a thriving trade in historical reproductions.  If you look through Cimarron’s catalog, for instance, there are many guns that are exacting copies of historical pieces.  And there are other guns, like The Man With No Name Conversion, that they refer to as “Hollywood Guns.”

My favorite scene in The Good, The Bad and The Ugly doesn’t include Clint Eastwood.  It features Eli Wallach as Tuco, but it stars an early incarnation of The Man With No Name Conversion.  Tuco, in the local mercantile, pieces together the ideal revolver from the miscellaneous parts of several guns.  The scene has very little dialogue, but speaks volumes about the cinematic significance of the gun.

The gun Tuco builds is a Navy with a percussion cap cylinder, which he then pretends to load with brass cartridges.  You gotta love movies.  They assume we’re stupid.

Just suspend your disbelief and enjoy.  And watch that loading lever.  It’s tricky.

Cimarron has an obvious respect for both the weapons and the cinematic genre.  They even sell a Man With No Name Conversion with a silver rattlesnake inlaid in the grip.  So if it is Eastwood you admire, that would be the gun for you.