Colt was very late to the modern, double-action .44 Magnum game and then really only stuck around for a little while. Only after both Smith & Wesson and Ruger had become well established in that market did Colt even enter the game with its single offering—the Colt Anaconda revolver.

The Anaconda was only manufactured as a production gun from 1990 through 1999 and then as a limited Colt Custom Shop offering for a few years afterward, which is a shame because the Anaconda was actually a hell of a revolver. 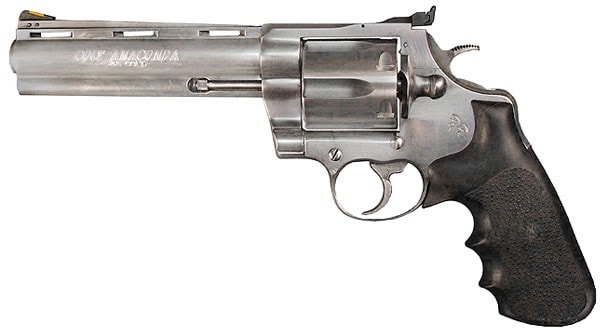 It wasn’t quite up to the standards of the Colt Python, but in my opinion, it’s equal to any other .44 magnum handgun on the market. I like the gun and have owned one with a six-inch barrel, which I bought used, for a number of years now.

The design of the Anaconda was based on the look of the Python. The new AA frame was much larger, scaled up to handle the much more powerful cartridge. The barrel look was the same as the classic Python, with a vent rib on top and a full lug underneath. The internal components were different from the Python, however, and were based on the King Cobra/Trooper models.

The Anaconda was only offered in stainless steel (usually a brushed finish, though they did offer some in a high polish finish). It had target-style sights, with a high-visibility red insert in the front and fully adjustable notch rear that had a slight white outline.

And typically the Anaconda came with rubber target grips bearing a silver Colt medallion, though ones with walnut grips featuring a gold Colt medallion are not uncommon (such as mine).

Initially offered only with a six-inch barrel, later models with a four-, five- (very rare), and eight-inch barrel were also available. The .44 Magnum/Special version is the most common, but there are plenty of Anacondas chambered for the .45 Colt cartridge as well.

Differences from the Colt Python

Unlike the Python, the internal mechanisms of the Anaconda did not get a lot of custom fitting before shipping. As a result, while the trigger is very good, it is not on a par with the Python. However, the whole gun is very robust and I’ve never heard of someone having problems with the cylinder getting slightly out-of-time (where the chamber alignment was no longer perfect), as is a weakness of the Python. The Anaconda locks up tight—“like a bank vault” is the common way it is described. 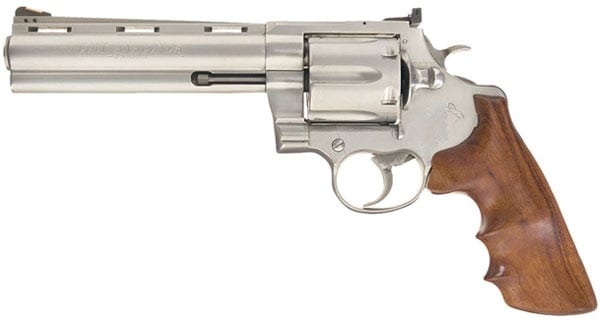 The Anaconda is a heavy gun, about the same weight as either the Ruger or S&W double-action .44s. The weight helps to moderate recoil, which can be very substantial with “full house” magnum loads. Personally, I like the walnut grips, but I have shot Anacondas with the original rubber grips and they are nice, as well.

When Colt first introduced the guns, the Anaconda had embarrassing accuracy problems, so very quickly they stopped shipping the guns and retooled them. Subsequently the Anaconda is now considered very accurate.

Using the standard sights, I can easily hit a six-inch group at 50 yards, standing. I’ve never shot one with a telescopic sight (that I can recall), but they are purportedly perfectly accurate for a competent shooter out to at least 100 yards.

While I love and cherish my Python, I actually like shooting the Anaconda more. No, the trigger isn’t as buttery smooth as the Python, but I also don’t have a nagging worry about causing wear on the Anaconda. It is very strongly built, and has taken a real pounding of my very powerful .44 Magnum handloads over the year, without the slightest indication of any wear problems at all.

In single action, the trigger is extremely crisp and fairly light. In double action, it is a long, steady pull, smooth until it stages just a bit before the break. This is typical of the other Anacondas I have shot, as well.

Needless to say, given the size and weight of the Anaconda, this is not your ideal concealed-carry gun. But it would make one hell of a companion on your hip for any hunting or deep-woods expedition. Personally, I wouldn’t choose a handgun to go after grizzlies, but I also wouldn’t feel too under-gunned with an Anaconda (and the right loads), either.

Anacondas hold their value to this day, though, at $1300 to $2000, they’re not priced at as much of a premium as the Python. Given how well the gun is made, if you find one at a price you like, I think you can buy it with confidence that it will last for many years (provided it hasn’t been abused in some way).