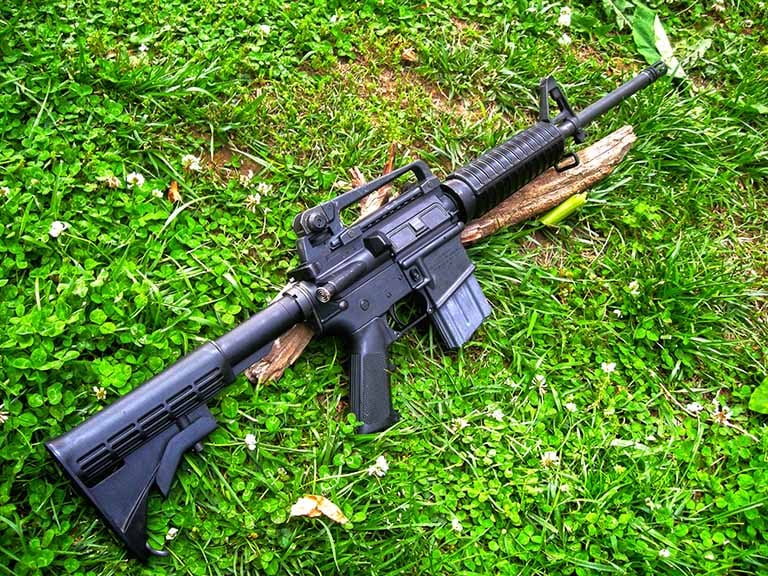 The AR-15 is America’s Gun, an icon of the American gun rights movement and a symbol of a nation’s proud military. It has proven itself to be one of the most adaptable and modular firearms in history. With such a high demand for AR-15 rifles, it is no wonder that almost every firearms company produces an AR-15. From companies that focus solely on AR-15 rifles, to companies that have never produced an AR until recently, to companies who have seemingly always been in the AR-15 game.

Domestically, the AR-15 market is packed full with companies feeding the need for the black rifle. Although the market for new AR-style carbines is voracious, not everyone can afford to buy new. AR-15s can be expensive rifles. The more reliable and better built rifles available will often start around $800-$1,000. For those who want an AR-15 at a lower price point there is hope, in the form of a police trade-in.

Sometimes police firearms will be available for half the cost of a new firearm. This can really help the budget minded shooter who is looking for a good brand, but doesn’t have the money. Colt firearms are not known for being inexpensive, but police trade-ins will be available for half the MSRP of new Colt rifles. Many times officers only shot the weapons for yearly qualifications and some practice. After the miniscule amount of shooting, they were cleaned, oiled and put back into the armory. They were only brought out to be holstered or stuffed into the back of a patrol car. While police rifles and shotguns will often show handling marks, they will often function just fine.

While Colt AR-15 rifles are a common sight these days, this one is a bit different. Instead of being made at the Colt factory in Hartford, Connecticut, this rifle was made at the Diemaco plant in Kitchener, Ontario, Canada. 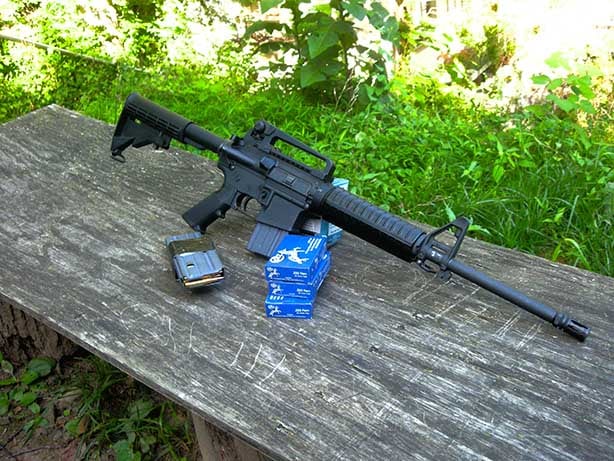 This pony-gun ran great with Colt-brand ammunition – even if it was made in Russia (Photo by F. Borek)

Diemaco, now known as Colt Canada, began producing the C7 rifle for the Canadian Military in 1982. The C7 rifle is a Canadian-specific, Colt-licensed variant of the M16 rifle. Unlike the American M16 rifles, the Canadian C7 has a cold, hammer-forged barrel. reportedly, a batch of Colt Canada AR-15 rifles came into the country as a contract overrun, but I could only find internal rumors substantiating this.

When Colt Canada had a surplus of rifles, several law enforcement agencies wanted new rifles. Colt USA imported the rifles and sold them. Occasionally you’ll see a new Colt rifle with a Colt Canada upper receiver or parts from Colt Canada. Colt however does not import entire rifles from Colt Canada.

The rifle presented here – labeled in Colt’s catalog as LE-6721 or AR-15A3 Tactical Carbine – is as basic as it gets these days with AR-15s. It ships with a fixed combination front sight/gas block, a detachable carry handle with A2-style rear sight and four-position Mil-Spec adjustable buttstock. The handguards are slim-style with underlying heat shields and the standard 16 inch, heavy cold hammer-forged barrel is threaded and features a 1 in 9 inch twist rate.  The receiver is marked .223, while the barrel is marked 5.56 NATO, so it will shoot both rounds safely.

The lower receiver has the typical Colt AR-15 markings, except for “MADE IN CANADA” engraved on the side. The upper receiver features the stylized “D” used by Diemaco and a splintered “A” signifying the upper was forged by Anchor Harvey forge. While the finish on police rifles will often be scratched or dinged up, these are purely cosmetic. The magazines supplied with police rifles are often well used and old, but the manufacturing code on the 20-round magazine included with the rifle, indicates a manufacture date of January of 2013. Since they were only $10, I stocked up.

As basic as a police rifle usually is, it can make a great starting point for someone who really wants to customize their AR-15, giving you a blank slate for half the price of a new rifle. I’m staying with the KISS principle and will keep the rifle basic and simple. AR-15s were designed as lightweight carbines and this one is staying that way. 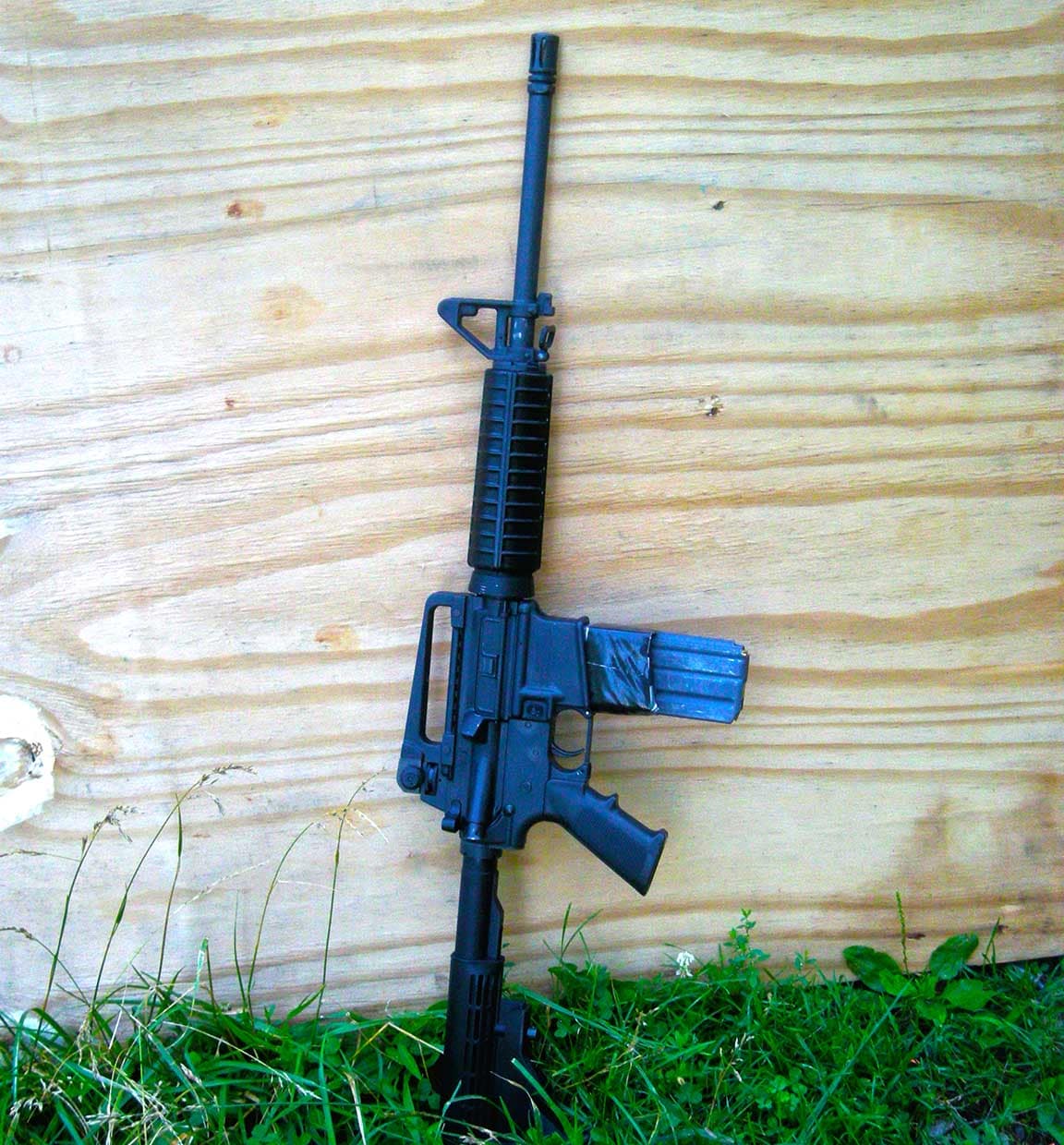 Jungle-magazine setup is old-school, but functional (Photo by F. Borek)

I tested the rifle with three brands of ammunition: 55 grain .223 PMC, 62 grain .223 Silver Bear and 55 grain M-193 5.56x45MM Federal. Obviously, the zinc-plated, steel-cased Silver Bear is the cheapest and will probably be the ammunition you’ll do most of your practicing with, unless you can find a good deal on brass cased ammunition.

I shot at 25 yards and found the best groups of the day to be from the Federal M-193. PMC gave groups of 1 inch to 1.5 inches and the 62 grain Silver Bear performed better than expected, bringing in a 2 inch group; for plinking and practicing, they’ll do just fine. If your police rifle is going to do double-duty for hunting, then be sure to test out which ammo works best and achieves the best accuracy. A 1 turn in 9 inches twist rate can easily stabilize everything from 55 grain to 77 grain ammunition, if you plan on taking longer shots.

One thing I noticed while shooting was the trigger. Factory AR-15 triggers are heavy, gritty, creepy and just not good. Luckily on this police rifle, the previous user smoothed it out. While it was still heavy, there was little creep, but the break was nice.

The police trade-in AR-15 is the way to go for those who want to buy a quality rifle, but don’t have the cash to buy new. Or if you want a good rifle and plenty of money to buy ammo, magazines and other accessories. The AR-15 is an adult Lego set and you have a blank slate with a well priced and reliable rifle. The fact that it is from Colt Canada, is just icing on the cake.