I don’t know what’s come over me lately.  I used to stand removed from the swarm of tactically clad gun-nuts who speak what I thought was some sort of gibberish while drooling over their indistinguishable black rifles.  I didn’t care much for their debates, and I certainly wasn’t about to pledge that fraternity.  Then I got my hands on a really nice AR-15.  Though it felt somewhat like a toy (I am large; it is small), I didn’t want to put it down.  And then I pulled the trigger.  Now I know.  I understand.

I may not be able to define this feeling with any stunning eloquence, but I understand why so many people love this crazy little rifle.

And because I spend about 90 percent of my life researching one thing or the other, I decided to go back to the beginning.  Or, more aptly, to the source.  The AR-15 began at Armalite—but the contract orders are (were?) built (in large part) by Colt.  The Law Enforcement Carbine seemed like the perfect place to start. 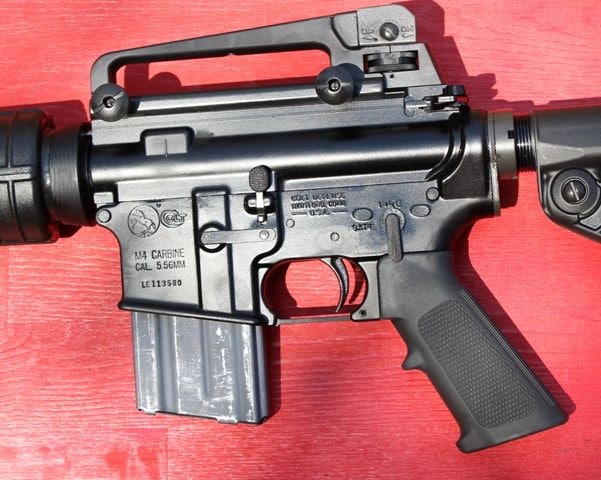 When I went hunting for an AR-15, I established some basic constraints.  I would have liked to have found an actual M-16A2 — they’re out there — but I don’t know anyone who is willing to let me have one for a few weeks.  And that’s understandable.  I am actually more interested in the baseline as it stands now: the M4.

The Colt LE 6290 is a no-frills, bare bones civilian version of the M4.  It is so close to the M4 that it actually says M4 on the receiver.  And that’s what most seem to call this rifle, though I have seen it called the Law Enforcement Carbine and the Advanced Law Enforcement Carbine (though that may refer to the LE 6940).  Call it what you will–it is a civilian M4.

There are a couple of notable differences.  The first is barrel length.  Military and law enforcement units can get away with shorter barrels.  The second is the fire select dial.  The civilian version is not burst or full-auto capable. 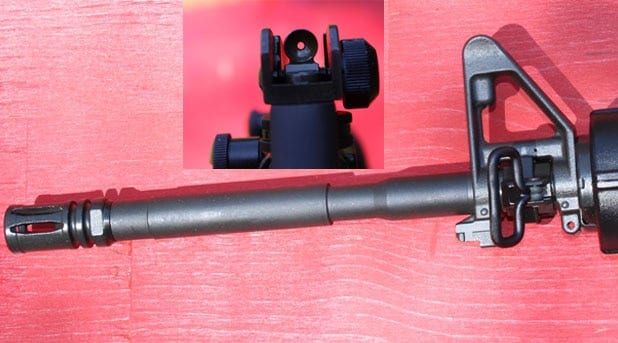 The sights are rock solid and accurate.  The high front post is solid and well protected.  It is not easily removed.  The front blade is a little bit wide for fine work—but it is more than sufficient to ring a gong at 100 yards (once you nail down where it is shooting, which took me more than a magazine).  The rear aperture is in the back end of the carry handle.

The carry handle is removable, and it leaves a reasonable section of rail on top of the upper.  This is the only accessory rail, as the hand-guard is plastic over aluminum. But there is more than enough room on the top rail to mount one (or more) optics.

The trigger on the LE 6920 is decent.  I have no complaints.  If this were something else—a .308 for a designated marksman, or something that would consistently be used for long range shots, I’d probably want a lighter trigger with a bit less travel.

The stock, a Rogers Super Stock, is adjustable, lockable, and has multiple places to attach a sling.  Collapsed, the LE 6920 comes in at 32 inches.  With the stock extended, it is 35.5 inches.  I’m 6’4”, and I really have to tuck in my wings with it, but I wouldn’t if I were wearing something other than a T-shirt.  And the adjustable stock moves easily, compacts tightly for storage or close quarters, and doesn’t adversely affect the gun’s balance.

The LE 6920 comes with two magazines.  They are steel, and hold 20 rounds.  I used several during the evaluation and I haven’t found a magazine yet that won’t work flawlessly, even after being abused.

This is a base model M4, no doubt about it.  And that’s exactly what I wanted.  Stock.

This gun runs well.  The first day I shot it, I put several hundred rounds of Wolf ammunition through it.  I was trying to get it to fail, and it wouldn’t.  I kept hoping for a jam—some reason to use the forward assist—but nothing.

With the iron sights, the LE 6290 does better than most carbines.  I zeroed the sights at 100 yards.  While bull’s eyes are complicated, the groups are tight.

Colt’s literature says the carbine is effective out to 600 meters.  That’s really far.  One I was dialed in, I could use the gun effectively at 100 meters.  200, though, would be pushing it for me with these sights.  600?  Yes, I know this gun can make a bullet go that far.  But effective seems to be stretching it a bit.

For the purposes of evaluation, I removed the carrier handle and put on a couple of different sights. 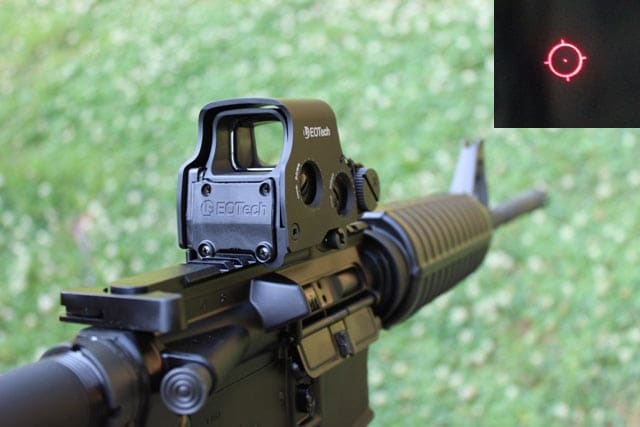 This is one serious piece of equipment.  It is brilliantly designed.  The larger glass means that target acquisition is much easier.  Yet I have a unique problem, as yet undiagnosed, that keeps me from seeing the hologram as anything other than a fuzzy red circle.  I thought the sight was broken until I took photos of the hologram—and they came out sharp and crisp.  So I passed the Eotech around, and I’m the only one who sees fuzz-balls. I had better luck with Aimpoint’s Patrol Rifle Optic. 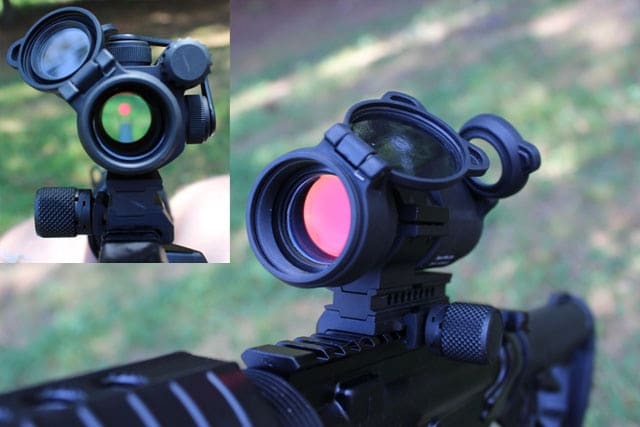 While the sight is larger, and the available field of view smaller, I can see the red dot.

I shot four five round groups at 100 yards from a bench rest.

Wolf 55 grain.  While the steel cased Wolf has a bad reputation, it is cheap and it works.  It is a bit dirty for my taste, but it works.  My averages with the Wolf came in a 3.7 inches.

Winchester.  Also 55 grain, the Winchester is more standard issue 5.56.  My groups tightened up a bit with them—3.2 inches.

What I already want to change

I don’t know anyone who has a stock AR-15 rifle.  Everyone, and I’m not exaggerating here, that I know has added or changed something on their AR.  Finding a stock model (in private hands) would be to find a stock 32 Ford.  People love to mess with these things.  And that’s why there is such a cult-ish aspect to the 1911 fraternity and the AR-15 fanatics.  And it is why there is not such a cult-ish following behind the AK-47 and the M9—modifications are not as easy to make.

After living with the LE 6920 for a couple of weeks, there are some changes I’d want to make (if it were mine).

For starters, I want a light (or the ability to mount a light).  I would be using this gun, mostly, for target shooting, which happens in daylight hours in these parts.  But I’m obsessed about being prepared, and would want to be able to use it day or night—if I had to.

To that end, I want a rail on the front end—so the heat shield will have to go.

While I like the current sight configuration, the massive front sight means that optics have to have really tall bases to get them to see over that front post.  Not a huge deal, but something I’d work on.  The rear sight, though, leaves with the carry handle—so I would want something to use as a backup sight.    But removing the front sight wouldn’t be easy.

Eventually, I would do a trigger job.

And I’d find a couple of more voluminous magazines.  The 20 round magazines are nice, and sufficient, but why stop there?  More is always better, right?  I’m not talking Beta Mags, but a couple of 30s, a 60 or two. 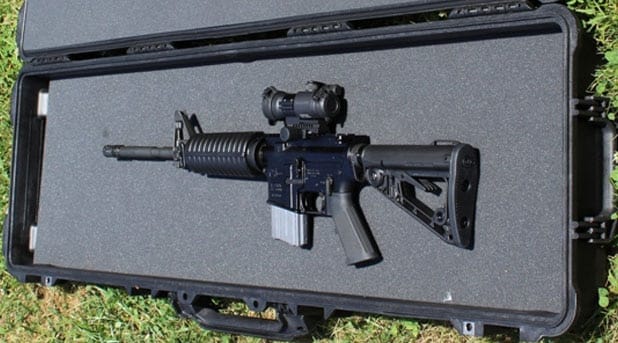 The Colt Law Enforcement Carbine has lots of competition.  I used to think it had too much competition.  But now I get it. This weapon will have obvious appeal to members of the law enforcement community.  As many of them have already qualified with M4s, it will be remarkably familiar.

And the Colt LE 6920 Law Enforcement Carbine is a great starting place for civilian shooters who want to start shooting ARs, too.  If you already know you want more bells and whistles, then there are other models available from Colt, and countless varieties available elsewhere.  Or, as a friend of mine keeps telling me, build it from the ground up.

But that takes time, and a lot of concerted effort.  If, like me, you want something to shoot now….  I wouldn’t be able to leave it alone.  I know that.  But I’d have a working gun while I made all of my modifications.  And the LE 6920 retails for just over $1,000.  Not bad.

Maybe I’d leave it exactly like it is, including its iron sights, and build a long range AR from the ground up.

The Colt Law Enforcement Carbine is a tremendous gun in its own right, and the perfect introduction to the platform.  And I’m hooked.