This is something to see.  Despite the fact that it is covered in a stylized camouflage, the new painted Colt ARs are meant to be seen.  They’re stout rifles that come with a variety of extras, but they’re based on the basic semi-auto M4 pattern receiver that makes the Colt LE6920 the industry standard entry level AR-15.

The LE6920 is a basic AR.  It’s heavily profiled, 16-inch barrel is a standard for carbine length rifles.  The flat top upper is useful for mounting a variety of optics, sights, or handle/sight combos.  The front sight is less adaptable, as it is a fixed A2 sight that works fine by itself, but can block the field of view from some optics.  The rifle has a forward assist and a chrome lined barrel.  This one came with a Magpul MBUS and one magazine. 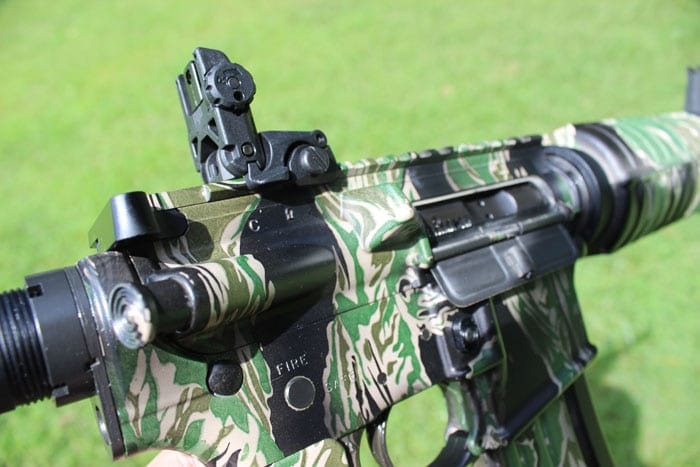 The furniture on this gun is typical to most LE6920s.  The Rogers stock is paired with a typical M4 forend on this one, but all are shipping now with Magpul MOE stocks.  This one has a Magpul trigger guard.  Others I’ve seen have Magpul stocks and forends.  As the rifles don’t have their own pages yet on Colt’s site, it is hard to say what is standard.

The defining feature, though, is the paint.  And it is something.  These are hyrdo-dipped.  The exact composition of the paint hasn’t been revealed publicly, but it is supposed to be very durable.  The process itself is high-tech.  Layers of paint are printed onto the surface of very still water.  The gun is then dipped into the paint (and water).  The paint adheres to the surface of the metal and plastic.  It provides very complete coverage, and doesn’t distort the image too much. 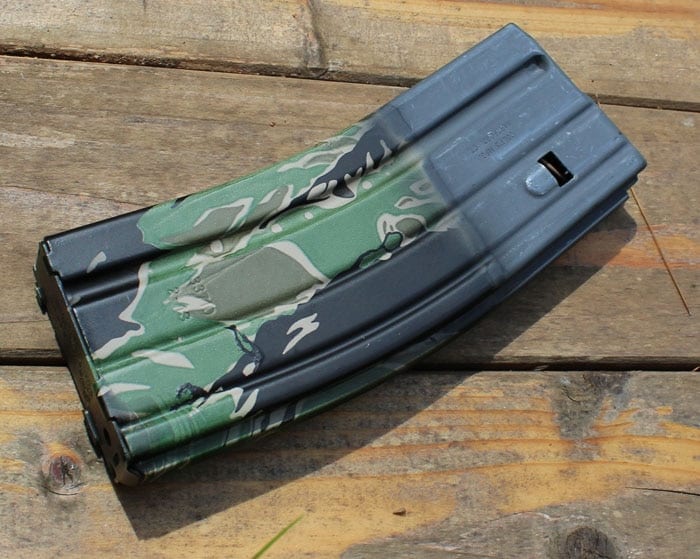 The paint is durable to abrasion and impact (to a point), but may not be so tolerant to extreme heat.  That’s why the barrel isn’t painted also.  The surface texture on the gun is a bit more slippery than anodized aluminum, and a bit glossy.  These photos where taken in direct sunlight, and I had a difficult time catching angles on the gun that wouldn’t glare.

Good question.  This is a nostalgic form of camo.  The Vietnam Tiger Stripe has long been a staple for the region, but grew in notoriety as it was picked up and adapted by American Special Forces in the late 1960s.  This adaptation from Colt is meant to be evocative of that era.  It isn’t an exact copy, but it’s close enough.

This creates a bit of a philosophical riddle.  It is evocative of an era, but not an actual recreation of anything from the era.  Even the rifle, though derivative of the early M16s, is very modern.  So it is an homage.  And it is still a rifle that has all the potential of any other LE6920. 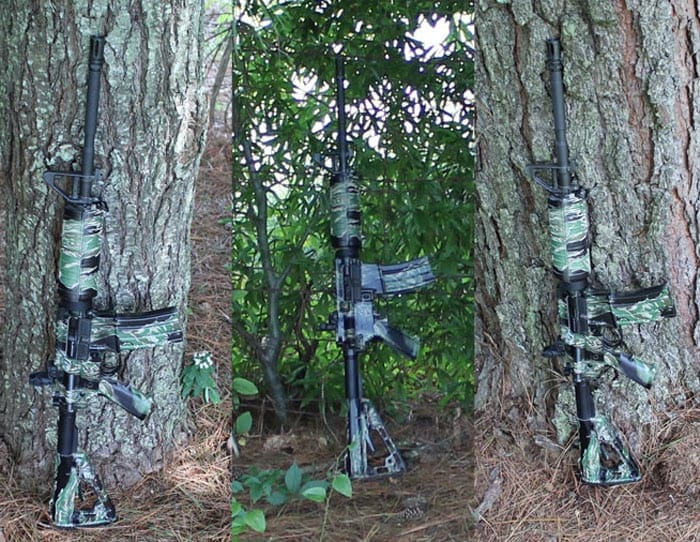 The pattern is especially useful if you plan on hiding near green tigers.  The stark contrast of the black stripes is jarring from close distances, but looks more like deep shadows as you add distance.  As jungle canopy is scare where I live, I took some photos against more typical American vegetation.  The results vary, but all look reasonably effective.  Even in grass, the pattern breaks up nicely.

I’m holding off on a full blown review.  My typical review sequence is to pull the gun out of its box and start feeding it rounds.  After a couple of hundred rounds, basic performance testing, and a good cleaning, I’ll run an AR like this through more practical tests.  I’ve done this with a LE6920, so I know what to expect. 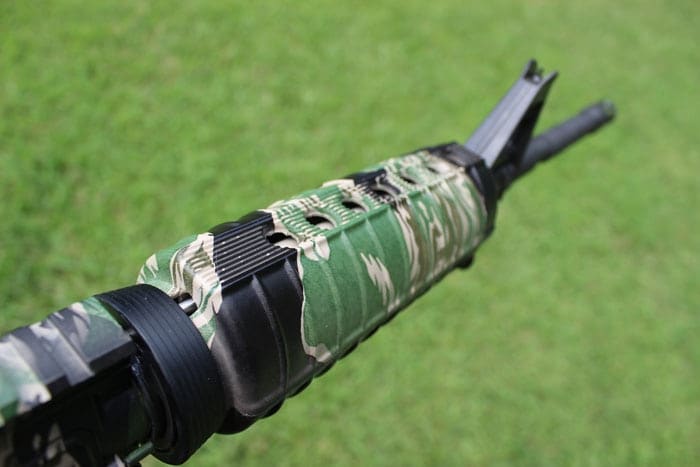 What I don’t know, and what I will report back on, is how this paint stands up to the typical use most of us (who are not actively on patrol) expect of our rifles.  How will the paint handle the opening and closing of the dust cover?  How will the heat generated in the upper and lower effect the paint?  What happens when brass bangs out onto the deflector?  I’ll check on this at 500 rounds, and then again at 1,000 (hopefully).

If the Vietnam look isn’t your cup of tea, there are other options.  I’ve seen the Carbon Fiber and Muddy Girl rifles, and both are just as well finished (and even less useful as camo).

There are other options besides the Tiger Stripe. These are all in the works now.

If you are looking for functional camouflage, Tiger Stripe is better than plain old black.  This rifle can be both a working AR-15 and a nostalgic through back to a time that didn’t exist in exactly this configuration.  Yet the gun may appeal more to people who simply want to look at a dressed up AR-15.   Over time, after this craze has passed, this gun (in mint, new-in-box condition) is going to go up in value.  Maybe significantly.  Do you have room in the safe for an investment?  The cost seems to hovering around $1,300, a bit more than a typical Colt AR, but well worth it.