When Colt released the LE901 earlier this year, the reviews were mixed.  Some picked on the gun’s accuracy, while others took Colt to task for creating an AR-style rifle that wasn’t modular enough with its .308 upper, but I’m inclined to disagree.  I’ve been working with the LE901 for more than a month now and I’ve got a very different take on this rifle.

The LE901 has a look.  It isn’t all that bad, though it isn’t sexy either.  The receiver is chunky, but the chunkiness doesn’t seem out of place with a .308 magazine sticking out of it.  The controls are all very easy to access and work like an AR should.  If there’s anything really worth crowing about, it is the rifle’s unique ability to switch between the .308 and 5.56 platforms. 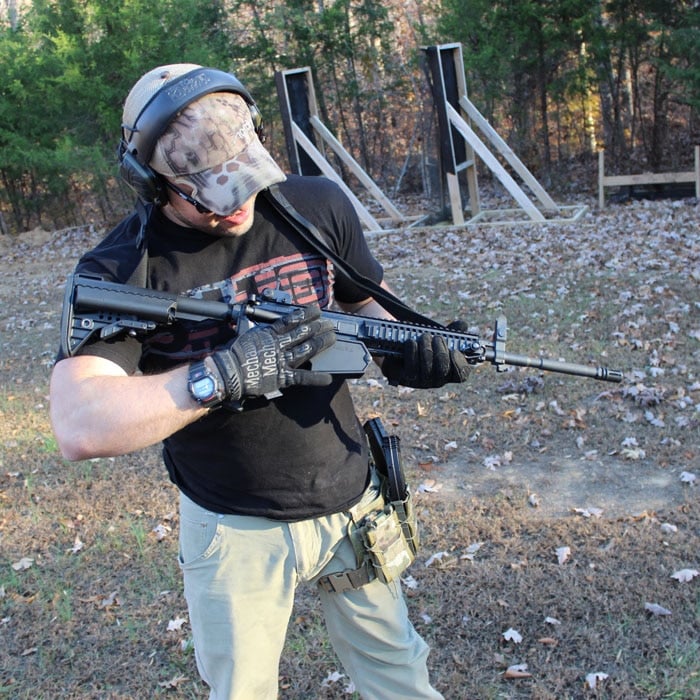 But there’s more that makes this a kick-ass rifle.  For one, the controls are ambidextrous.  Everything can be reached with the right or the left hand, though it is still going to eject from the right side only.

The monolithic .308 upper is fully floated.  It has a big, robust quad rail already installed. The tuning fork shaped flash hider is cut at a slight angle and is very effective at reducing rise.

The back up iron sights are another nice extra.  They’re steel and adjustable.  The front post is solid and flips up with one crisp snap.  The rear sight is also a flip-up design, but only a thin peep-hole post pops up.  It’s low enough to ride under most scopes and functional in its own right, especially for close quarters work.

The LE901 weighs in at 9.4 pounds, empty.  Most of that extra weight comes from the 16.1-inch barrel and extra steel in the .308 upper, though there’s some weight in the added bulk of the lower, also.  The rifle gets heavy fast.  With a full magazine, an optic, light and sling, it is easily up to the 11 pound mark or higher. 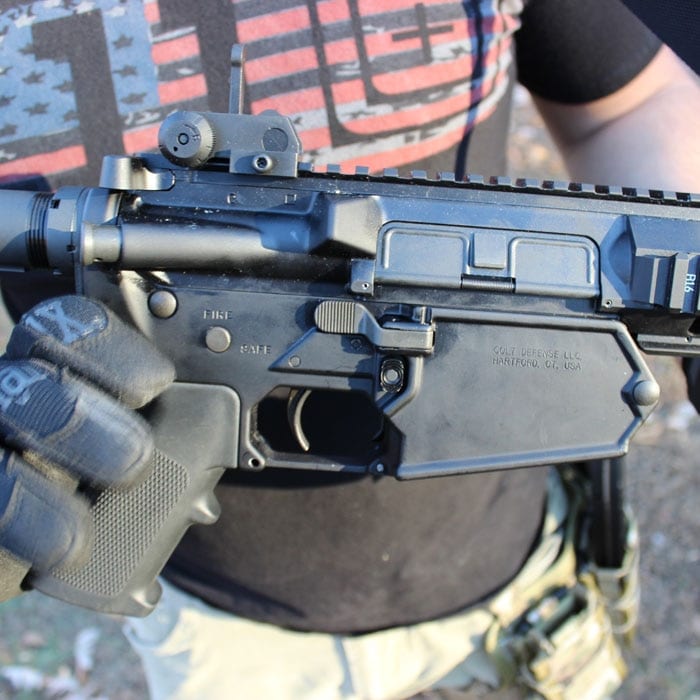 The broad, flat side of the lower is distinct. (Photo by David Higginbotham)

For those keeping track, the .308 barrel is chrome lined with a four groove, 1 in 12-inch right hand twist. The trigger is by no means the worst AR trigger I’ve ever worked with.  It has a bit of take up and a clean break.  It is light enough that the trigger pull isn’t going to wreck accuracy, but tight enough that you aren’t going to drop the hammer if you bump the trigger. It is somewhere in the 7- to 8-pound range.  While I’d like a bit more, it works well enough that it would take me a while to replace it.

The basic LE901 is an AR-10 of sorts.  It is and it isn’t.  If you simply picked it up and didn’t get up under the hood, you may not immediately notice the difference.  But there’s more to it.  Stick with me here, as it gets a little convoluted.  The upper on the LE901 can’t be switched out with any old AR-10 upper.  If the LE901 makes sacrifices, this is where it happens.  In order to maintain modularity with the other half of the platform, Colt has made the lower modular for any AR-15 upper.  It achieves this by monkeying with the positioning of the pivot pin. 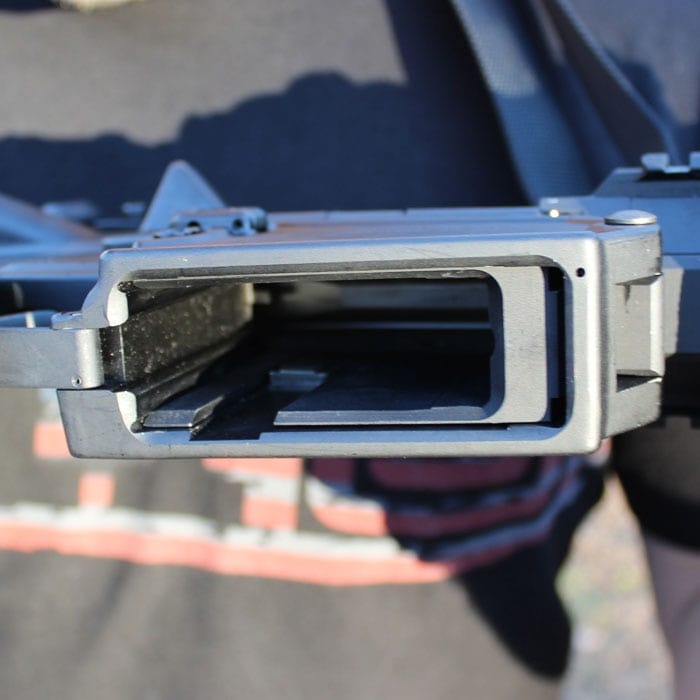 The mag well block, where the magic happens. (Photo by David Higginbotham)

How it works is interesting, but far less compelling than the real question.  Yes, it works.  It is very easy to pop off the .308 upper, insert the block and pin on a 5.56 upper.  The only other thing that has to be switched out is the buffer spring and buffer.  When the upper is off, a small pin at the business end of the buffer tube can be depressed.  Switch out the spring and buffer and put it back together.

In all, it takes only a minute, at most, to make the switch once you have the motions down.  It is easy, relatively intuitive and almost idiot proof.  The buffers are labeled and the springs have very different springiness, so there’s nothing to get confused.  While the hand-guards on the .308 upper and on the matched 5.56 upper look very similar, the uppers feel distinctly different.  If all else fails, check the muzzle-breaks. 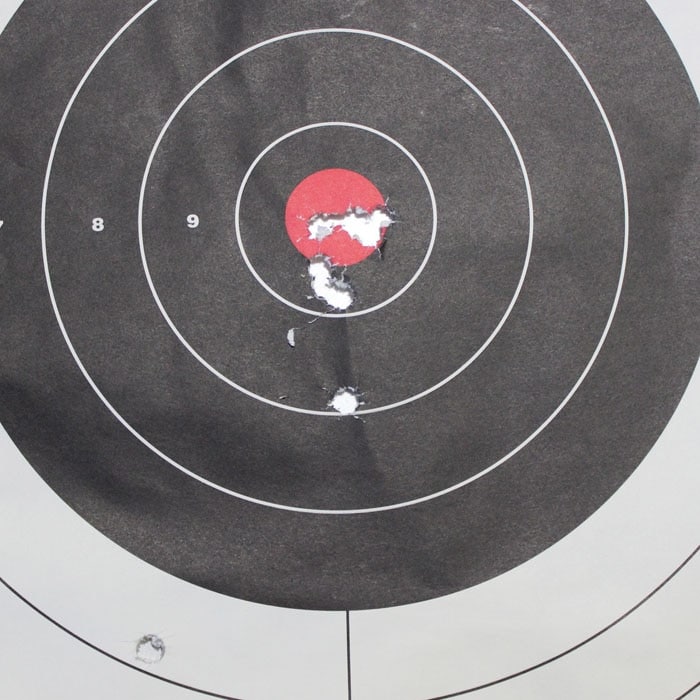 The recoil from the .308 is manageable.  While it isn’t as insignificant as the recoil form the 5.56, it isn’t as hard hitting as some .308s I’ve shot.  The muzzle-break is very effective at holding the barrel down.  The recoil will still push you back.  Knock off a couple of shots right in a row and it will stand you up straight.  But all of that is expected from the .308 round, no matter what you shoot it through.

The 5.56 upper, on this over-built lower, shoots like a dream.  It feels like an AR-15 and it looks like an AR-15, but it is even easier to control because of the added weight.  It will spoil you a bit.  It is just a bit steadier, just that much more solid, and the result is a boost to your confidence.

Why would I want one gun to do two different jobs?

This is a fair question.  I know many shooters who would rather have a dedicated 5.56 and a dedicated .308.  The simple answer is that both of these calibers are immensely popular.  The .308 is a solid choice for the designated marksman role.  It is also a very popular round for hunters these days.

The 5.56 has its obvious appeal.  The low recoil and small size of the 5.56 rounds makes them popular for varmint hunters and any number of tactical applications.  And that sums it up, really.  You don’t have to have two separate rifles.  One will do it.  With the LE901 you cut down on the redundancy of multiple lowers and only have to learn one dedicated system, one trigger, one safety.  And you can switch the uppers without having to rezero sights or optics.

I’ve never shot an AR-10 style rifle that delivers the accuracy that this gun did right out of the box.  We put a Weaver Super Slam on top of this one, and the scope complimented the rifle’s abilities nicely.  Bull’s eye accuracy at 100 yards.  That translates into genuine confidence well beyond that middling range.  That alone is worth the price.  But this rifle is so incredibly versatile.  It takes the modularity idea to the next level.