Colt.  At the center of this venerable company is a desire to serve.  From their iconic cartridge revolvers to their timeless single action .45s, Colt has armed our service men and women.  And the Peacemakers and 1911s are easy enough to find as they were issued.

But not so with the rifles.  Unless it has three stops on the selector switch, there’s something missing from an AR-15.

Let’s go back a bit.  The term pre-ban may be confusing, especially those who weren’t paying attention to gun culture for the ten year span of the assault weapons ban of 1994.  Modern sporting rifles were harder to come by then, and guns made before the ban went into effect often drew high prices. 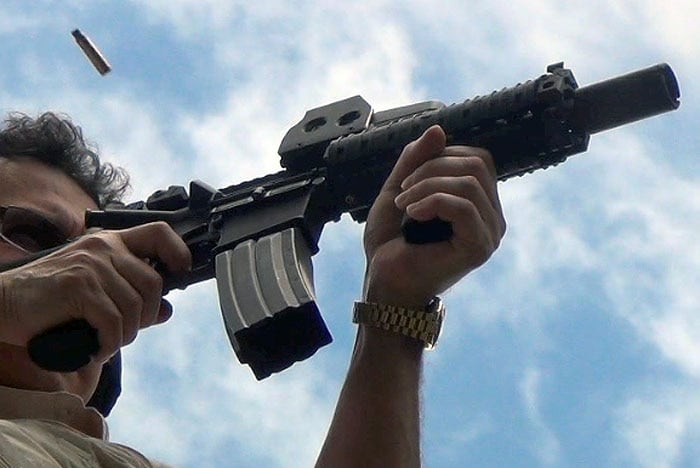 But there’s a prologue to that chapter.  The regulation of “machine guns” goes back as far as 1934.  But in the 80s, seers and other parts came under increased scrutiny.  In 1986, select fire machine gun manufacture and sales were more heavily restricted.  Guns made before that time can still be bought and sold by civilians, but they are still regulated by the NFA of 1934.  That means paperwork.

It can all be very confusing.  What is less confusing is the price tag on these guns.  A pre-1986 select fire lower, at bargain basement prices, can fetch $10,000.  That’s a conservative price.  Very conservative.  Then you have to top it, dress it up, register it, feed it….

On with the review!

The Colt lower here was made before 1986.  It is properly documented, registered, stamped, etc.  It’s bona fide, as we say in the south.  And it kicks ass.

I’ve shot some fun guns.  Some of which were full-auto.  Thumping through a drum mag on a Thompson is one of those rare things that makes me smile like a child.  But the old trench broom doesn’t feel like a useful tool.  I imagine it did at one point, but it is like driving my pop’s 32 Ford.  Maybe it would if I spent more time in actual trenches. 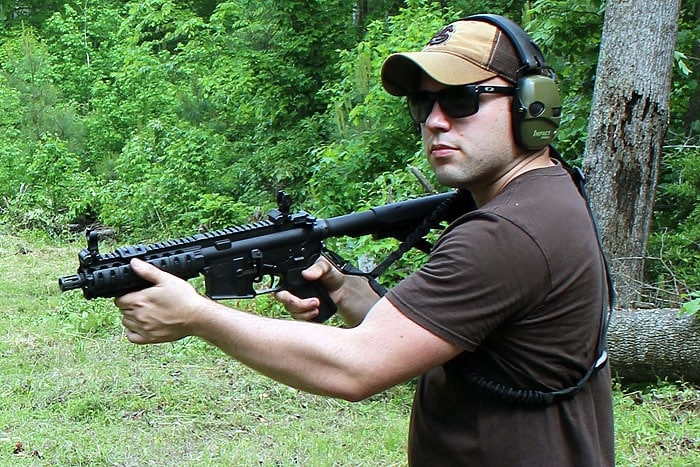 The Colt, when fired in single shot mode, shoots like any other AR.  In fact, this rifle has been customized like every other privately owned AR I’ve shot.  So no big deal there.  Throw on a Magpul stock, grip, and forend grip, and it feel fairly familiar.  It accepts magazines like an AR.  This is simply the chassis.  Until you flip the switch.

The upper comes from Troy.  It is an M7.  The 7.5″ barrel makes this an SBR.  But this is where the rifle begins to establish a real identity.  It is very maneuverable.  The M7 takes the overall length of the AR down to bull-pup size, all for $1,525. 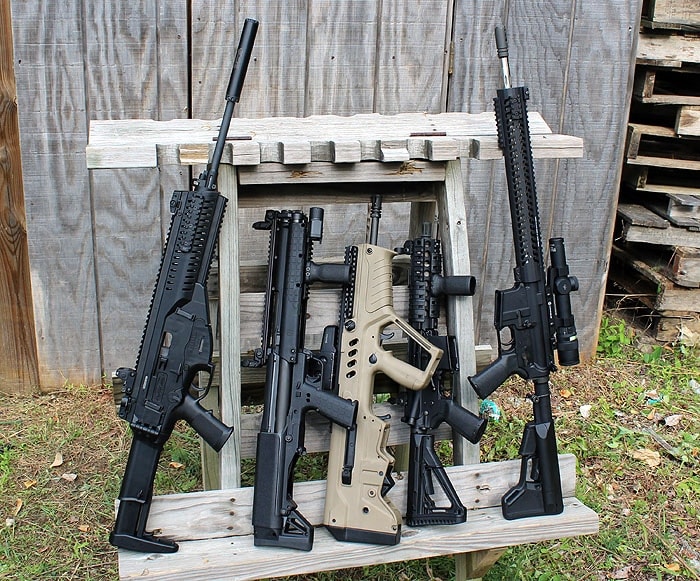 (As a side-note, and just to throw a hypothetical wrench in the system, I have to ask… would you want a short barreled AR, with all of the paperwork hassle and increased expense, when you could have a full sized Tavor?)

The short barrel knocks off a bit of the 5.56’s punch, and decreases the potential long range accuracy.  But that’s purely academic.  The short barreled AR is a close quarters weapon.  With the folding stock adapter from Law Tactical, the package gets even smaller.  What was already compact becomes easily concealed.  A bag like the 5.11 Triab offers fast access to incredible firepower.

This isn’t the type of rifle that you open up.  No mag dumps.  It can take the heat.  But why?  The adolescent fantasy we too often entertain when playing with full-auto weapons gives way to a reverential respect.  Burst fire with this rifle is reasonably accurate and controllable.  There is a significant muzzle rise, but the vertical grip helps to keep it level. 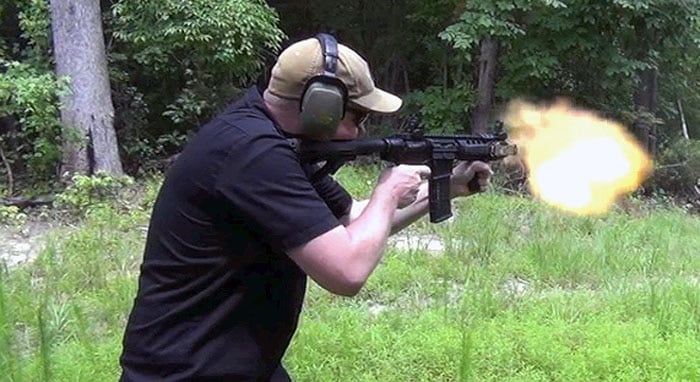 The first time I fired it, I felt a bit inadequate.  I had a hard time balancing the bursts.  Too little downward pressure, and the gun would rise up.  Too much, and I’d watch the dirt pop in front of the target.  I’m so conditioned to single shots, that I fire and relax a bit, even if it only for a fraction of a second.

It took me three magazines before I could keep it level enough to use the gun’s iron sights with anything approaching accuracy.  And then, I was putting bursts into a twelve inch group.  The first shot would thread the needle.  The next three or four would widen out substantially. 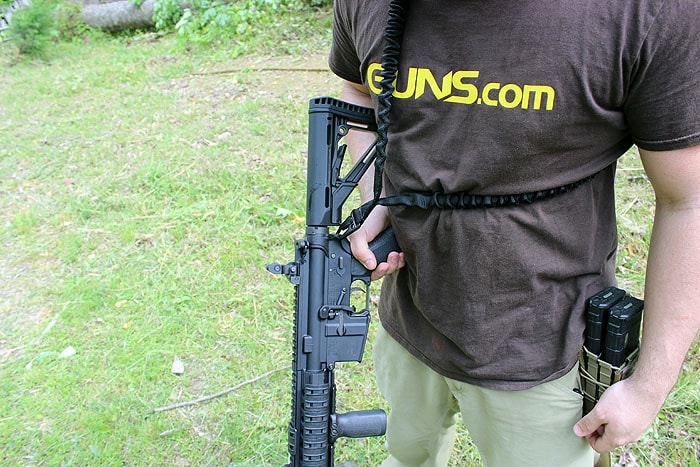 After a good solid burst (once I learned to control it), target acquisition happens the same way it does with any AR.  The iron sights work fine.  Non-magnified optics work even better.  No amount of stability would allow me to keep the irons aligned during burst fire.  But a single red dot, or a holographic circle makes things much more reliable.

But you have to be prepared to feed it.  Before the Great (ammo) Depression of 2012, we would load up the Surefire 60 round magazine regularly.  We emptied magazine after magazine.  But not now.  It is too expensive.

These should be more accessible than they are.  A select-fire AR is a tool that requires some discretion.  But there’s very little that can compare.  With the short barrel and the folding stock, this combination comes in much closer to sub machine gun standards.  I’ve yet to see an AK pattern rifle that can match the size, and I doubt I’ll ever see one this small that can match the accuracy that the Troy barrel delivers. 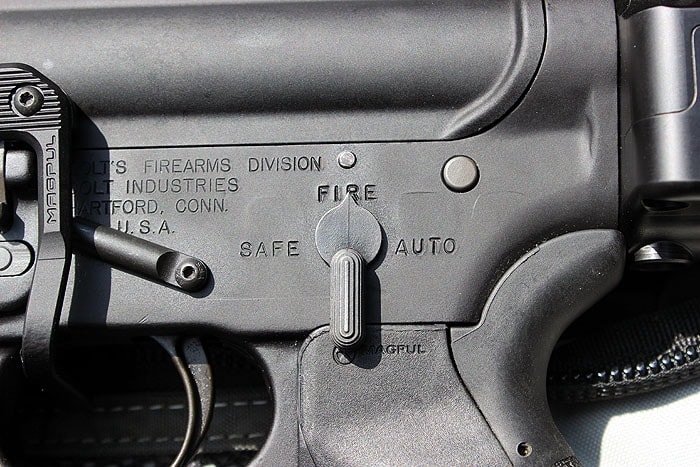 Is it worth it?  All of the extra expense?  The time required to find and buy a select-fire lower.  The registration of the lower?  Yes.  Of course it is.

Is it worth the price?  No.  This isn’t a dig at anyone who is selling a full auto gun.  Not at all.  It is a dig at the system that creates an artificially inflated value system based only on scarcity.  The gun doesn’t cost any more to make.

But that’s not the world we live in.  We live in a weird world where tools like this are only available to a select few.