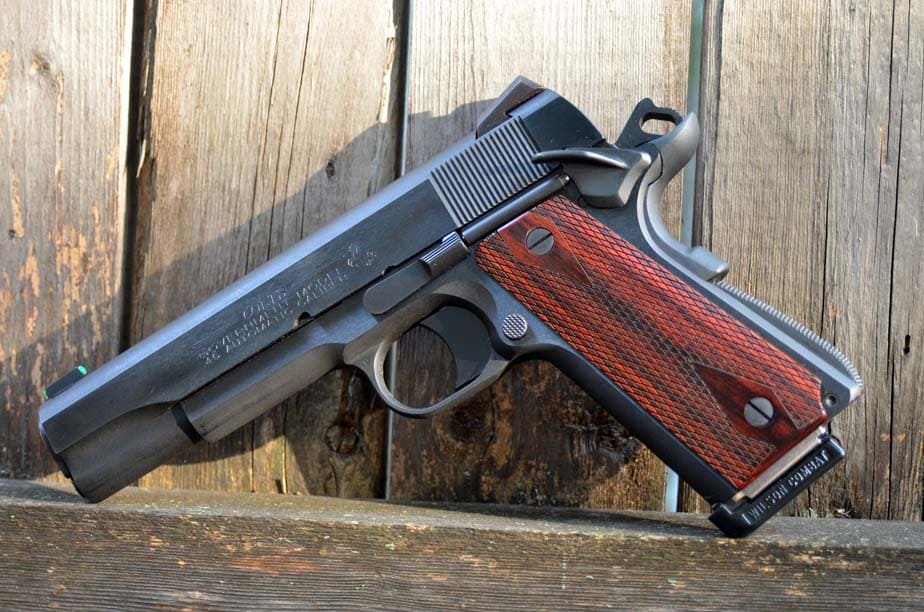 In 2012, Colt’s Manufacturing Company came out with a new twist on the Series 80 Government Model 1911 platform called the Custom Carry Government.

The pistol was initially produced as a limited edition item from TALO Distributors, but gained popularity to the point that it was, until recently, a regular catalog item. I bought one of the first thousand guns during the limited edition phase, and couldn’t wait to get my hands on it.

As soon as I opened the blue clamshell box containing the pistol, two Colt eight-round magazines manual and gun lock, I was like a kid on Christmas Day. The bluing was a nice two-tone finish, with polished slide and frame flats and matte surfaces on the top of the slide and front of the grip frame. I spent a little time just checking it out and everything I found just made me like this pistol more.

Starting with the basic Series 80 Government model frame and slide, Colt tweaked the venerable design here and there to make it more suitable for concealed carry. The CCG features cross-hatched walnut slimline grips, Novak’s sights, a beavertail grip safety and a small relief cut under the trigger guard that helps the pistol sit low and very comfortably in the hand. 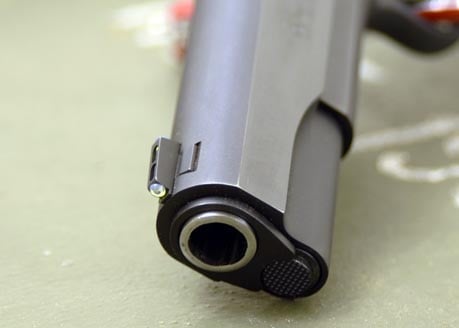 The highly visible Novak’s fiber optic front sight works in just about any available light, is nicely regulated from the factory. (Photo by Sean Hatten)

The most noticeable thing for me was the thin grips, and at first I thought they might be a little too thin, but with a lot of daily carry and several hundred rounds later, I have come to like them better than the full sized panels.

They’re smooth, but not too smooth, and the laser cut cross hatching adds just enough surface texture to keep it from wallowing around in your hand, while at the same time reducing the chance of snagging the grips on your cover garment. The thin grip profile also complements the already slim lines of the 1911, making it almost disappear when mated with a proper concealment holster.

The controls are straightforward Government Model, with a single-sided thumb safety that snaps positively from “Safe” to “Fire” with no slop, or grittiness. The beavertail grip safety is very nicely fitted, and the trigger is a long, non-adjustable aluminum 1911-style unit that works just fine for me and my long fingers, but might not be optimal for those with small hands. Fortunately, swapping out the trigger on a 1911 is a relatively uncomplicated operation, and can be done inside of ten minutes with few tools and a little patience. 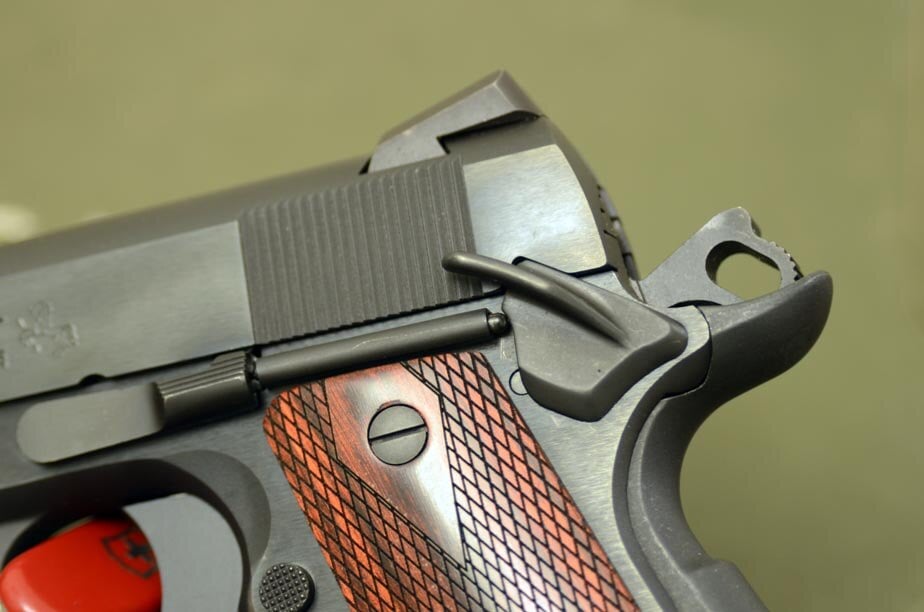 The slide is cut for the excellent Novak LoMount Carry sights, with a green fiber optic front and wide notch rear. The big green dot is easy to pick up in just about any available light, and the wide rear notch lets plenty of daylight into the sight picture. The sights are regulated for a six o’clock hold, which means that aiming for the center bottom edge of the bullseye should place your rounds just above the aiming point, into the center of the bull.

The sights were adjusted at the factory, and were dead on for windage and elevation, but the rear sight features a set screw in case any adjustment is needed. The front sight is dovetailed into the top of the slide, and can be adjusted for windage with an appropriate sight adjustment tool or (carefully) drifting it to the desired position with a brass punch.

Shooting the CCG was about what you would expect from a five inch Government Model, except for the sight picture, which was awesome in the extreme. No matter what the lighting conditions at the range, the big fiber optic front sight had plenty of contrast. The only (small) negative I could find was that the fiber optic element clouds over with firing residue after a while, and what you have left is a big, black dot that still works, but isn’t quite as bright as before. That’s not much of a negative, and a quick wipe with a rag gets you back in business.

Shooting from the holster, I was able to put rounds right where I wanted them as long as I did my part. Draw stroke from an inside-the-waistband rig was smooth and snag free. It points nice and straight on presentation, and there is no “hunting” for a good grip with this thing; it just fits. The shelf on the thumb safety is big enough to rest your thumb, but not so big that it impedes re-holstering or snags on the mouth of the holster.

Carrying the CCG calls for a good holster and an even better belt, because, as you can imagine, this sucker is heavy. I settled on a Wilderness Tactical Instructors Belt and a Comp-Tac MTAC hybrid inside-the-waistband rig. 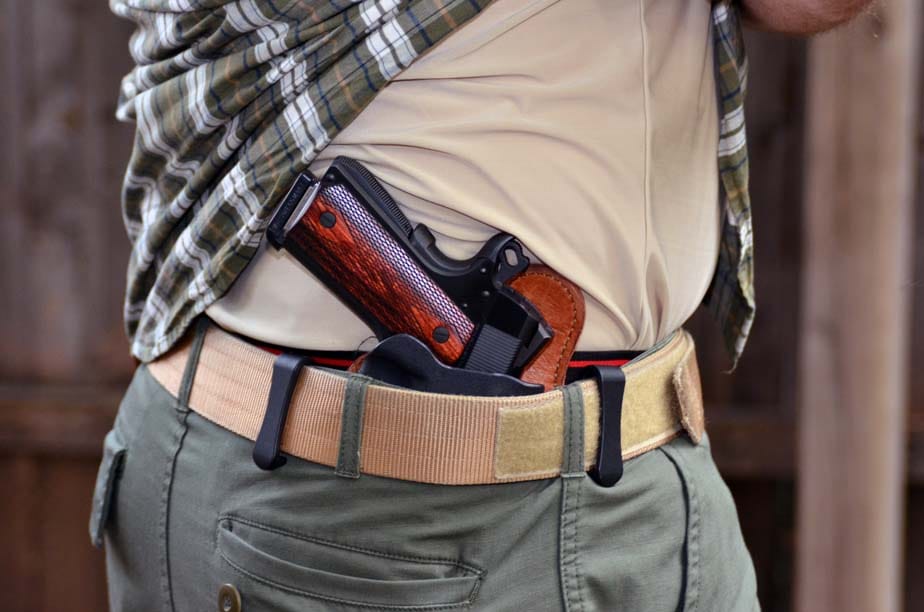 The CCG rides well inside the waistband, despite the weight. (Photo by Sean Hatten)

The Wilderness belt is double stitched and very stiff, so it won’t “roll over” at the top under the weight of a holstered pistol, and the buckle is a sturdy cast steel affair that adjusts easily, yet will not slip once locked down.The MTAC hybrid holster is one of my favorites, with a leather backing plate mated to a kydex outer shell that is molded to your particular weapon. The detachable shells are interchangeable, so you can buy one holster and, with a few minutes and a hex wrench, change it out for several different pistols to fit your needs. The large leather backing plate is comfortable and the whole thing suspends from cleverly-designed plastic hooks that engage over the top of your belt.

The low capacity of the classic 1911 means that extra magazines are pretty much a necessity,and there are a number of different ways to carry them. I favor a leather double magazine carrier from Gould & Goodrich, but I have also used a clip-on SOG multi-tool pouch when I need to throw a couple of mags on my belt without having to undo it and string a pouch. My preferred magazines are the Wilson Combat eight-round 47Ds, which have performed flawlessly for me since day one.

When you put this pistol on for daily carry, it doesn’t take long to realize that this ain’t no Glock; the weight alone is enough to pull your waistband down on one side, even with a proper belt, but for all that, it rides well and is surprisingly comfortable if you take the time to set your rig up just right. That takes patience and a willingness to experiment with different tweaks, but the end result is a carry system suited to you in every way. 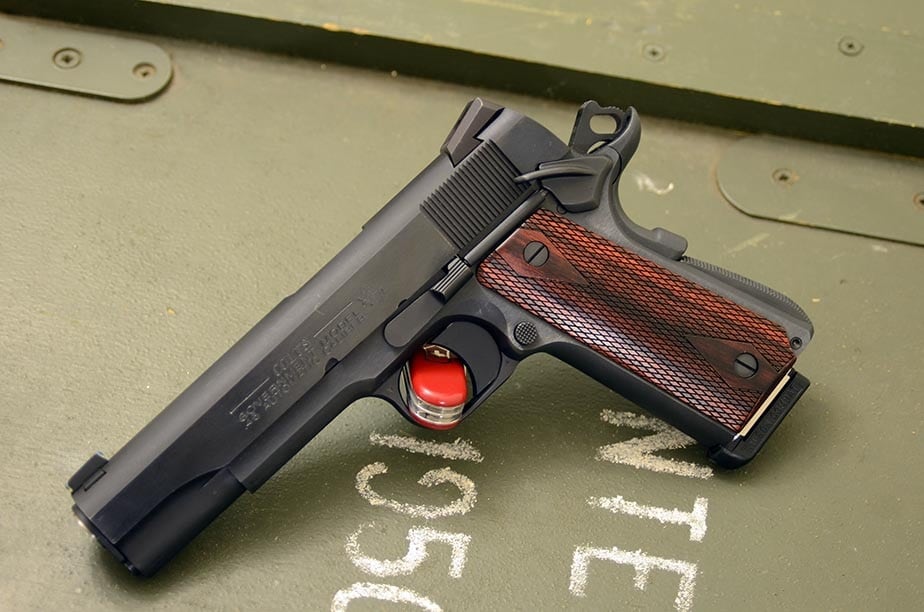 This pistol is one of the better renditions of the Colt Government Model. (Photo by Sean Hatten)

Having carried this pistol for some time now, I find that I like the longer sight radius, full sized grip frame and recoil-absorbing weight of the CCG, and while there may be smaller, lighter pistols with higher ammo capacity, they lack the awesome factor that can only be delivered by a high quality 1911.

Unfortunately, it seems that Colt has discontinued this great pistol, at least for now, so if you can find one for sale, get while the getting is good! There are a number of them still available on the various auction sites, and with enough customer feedback, who knows? Colt might put it back into production again. For fans of this platform, the CCG is a combo pack of features and capabilities that make the $1,111.00 MSRP, well worth it.