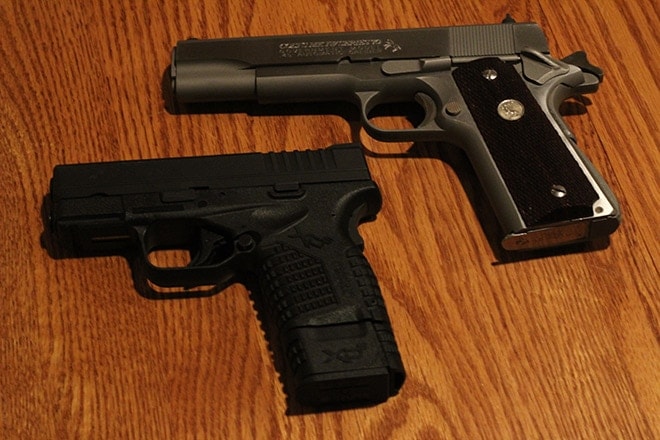 For a concealed carry .45, two of your most popular options are the 1911 and the Springfield XD-S.  But while these are both slim .45 pistols, the two couldn’t be more different.  One is old, one is newer.  One is hammer fired, one is striker fired.  One is all metal and the other is polymer framed.  One is full size and the other is compact.  But is one better for concealed carry as a whole?  Let’s take a look (Note: I’ll be using the Colt Mark IV Series 70 as my example for a 1911 in this comparison):

Let’s start with how the guns carry.  Obviously the 1911 is a full size pistol with a longer barrel, but when it comes to IWB carry the length of the gun hardly matters.  It’s the slimness of the gun and the height of the grip that counts.  Both the 1911 and the XD-S (when the seven round extended magazine is inserted) are roughly equal both in terms of slimness and overall height, and they both carry naturally.

When the five round standard magazine is inserted into the XD-S, however, its height is sharply reduced and it becomes a much easier gun to conceal inside the waistband.  Don’t get me wrong, I could easily conceal a 1911 all day long and be happy, but the XD-S has the strong edge when it comes to concealment.

That being said, I still much prefer the XD-S with the extended seven round magazine, at least for range shooting.  It fires a large round in a small package and being able to wrap all of my fingers around the grip simply permits greater control on behalf of the shooter.  Recoil on the XD-S is snappy but manageable, and it’s made even more controllable thanks to that extended magazine.

Nonetheless, in terms of shoot ability, the 1911 still wins hands down.  There is simply no gun that points as naturally as a 1911 (at least to me) and the all-steel construction also helps to drastically soften the recoil of the big .45 slug.  The 1911 is a gun I can shoot all day and still leave with a big smile on my face.  If I were forced to do the same with the XD-S, I don’t think I would be so happy.

Granted, the XD-S is a slim and compact gun designed for self-defense and not for range shooting.  In a true self-defense situation, you’re not going to notice the snappy recoil, and if anything you’ll be glad that you have a .45 that’s going to leave a much bigger hole in an assailant than a 9mm or .380.

The sights on the XD-S consist of two rear white dot sights and a front red sight.  I like this system as it allows me to quickly line them up and immediately focus on the red sight in the front. This contrasts with the rather dull factory sights on my Series 70 1911, which don’t have any coloring on them.  Yes, you can easily swap out the sights on a 1911 for models (such as Novak) that are superior, but out of the box I’m liking the XD-S’ sights more over the Series 70’s.

Another neat feature worth pointing out on the XD-S is how the magazine release is truly ambidextrous.  It sticks out on both sides and regardless of which side you press it on, the magazine slides right out without issue.  Both right handed and left handed shooters will be able to conduct magazine changes on the XD-S right out of the box without any modifications.  It’s not a big deal to me since I’m right handed, but anyone else who isn’t it will appreciate it.

Comparison of the XD-S 5 round, easy to conceal, magazine, and the 1911’s 7 round magazine, right. (Photo: Nicholas Oetken)

I also think the 1911 has the XD-S beat on ergonomics.  Like I mentioned earlier, no gun points as naturally to me as a 1911.  When I pick it up and aim it almost feels like an extension of my hand.  Yes, the XD-S is the modern polymer pistol with the marketed ergonomic enhancements, but the checkering on the grip of the XD-S is almost too aggressive for me.  It definitely allows you to get a secure grip around the gun, but it’s not what I would call comfortable.  I’ve held far more ergonomic single stack polymer pistols such as the Walther PPS, Walther CCP, and the Smith & Wesson Shield.

Let’s talk about the trigger next.  The 1911 is a single action hammer fired design whereas the XD-S is striker fired.  But just because these are two different designs doesn’t mean the triggers can’t be compared.  The trigger on the 1911 is short, crisp, and to the point.  There’s precious little take-up and while there’s definitely a wall when it comes to the break, it’s a wall that falls with minimal effort.  The short trigger pull, compared with the overall soft recoil of the gun, is what makes fast and accurate follow up shots perfectly attainable with the 1911.

In contrast to this, I found the trigger on the XD-S to be a little mushy.  There’s a lot of spongy take-up before you come to the break, but when it does break it’s definite and the sound of the click is clearly audible.  The reset is short, however, which offsets the malleable take-up process.

Finally, reliability out of both guns is excellent.  I experienced no hiccups of any kind with the 1911 and only one failure to eject with the XD-S while shooting 230-grain steel cased Blazer ammunition (out of multiple boxes fired).

Nonetheless, I still like the XD-S.  Springfield set out to make a single stack, polymer framed, and striker fired .45 pistol that was easily concealable and it’s obvious they succeeded.  Since other big companies are starting to offer pistols in the same niche (the new S&W Shield .45, for instance), it’s clear the XD-S is around to stay.  When putting it up against the timeless 1911, I would conclude it’s a practical if not quite perfect .45 concealed carry option.