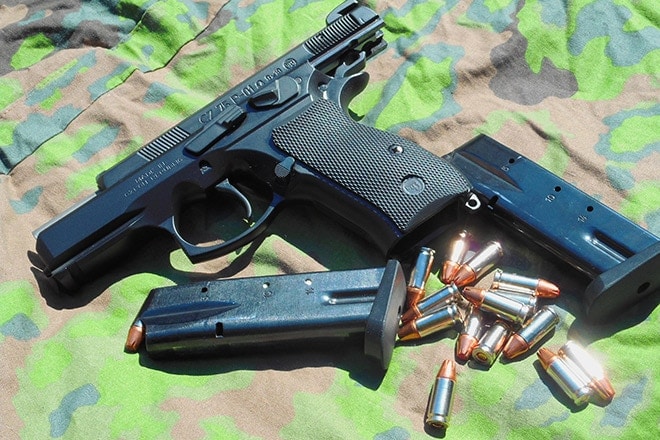 Sometimes we buy guns for the strangest reasons. I had no interest in purchasing a new CZ-75 pistol. I had no interest that is, until I began to read Gunsmith Cats, a Japanese manga (a comic for those unfamiliar) about a female bounty hunter named Rally Vincent. Rally owns a gunshop outside of Chicago(!), moonlights as a bounty hunter and is head over heels for the CZ-75. After spending several nights reading through chapter after chapter, I knew only one thing. I had to buy a CZ-75. 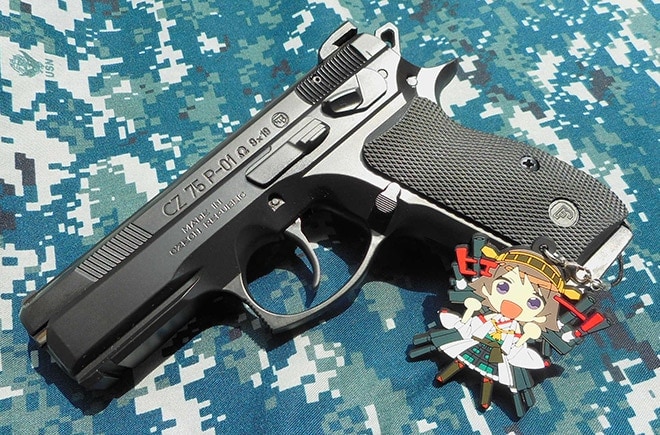 Making use of the police issue lanyard allows you to add your own flair. (Photo: Francis Borek)

In the series Rally prefers a first model CZ-75, which are extremely difficult to acquire in the United States. So when I went to my local gun store I was hoping to walk away with a full size CZ-75B. Instead I saw models that were more “tactical” including SP-01’s and a few P-01’s. I wound up choosing the P-01 Omega model, as it was one of CZ’s newest models to have been released. It wasn’t exactly Rally Vincent’s handgun, but it still read “CZ-75” on the slide. I wondered though if the P-01 Omega was worthy enough of both the CZ-75 name and Rally’s admiration.

While the original CZ-75 was designed and produced in the mid 1970s, the P-01 was developed in 2001 as a compact 9mm handgun that could be issued to both law enforcement and military personnel. CZ-USA claims that the P-01 Omega has been accepted for general issue throughout the Czech National Police. In the US, it is marketed primarily as a carry piece and is also offered in .40 S&W. 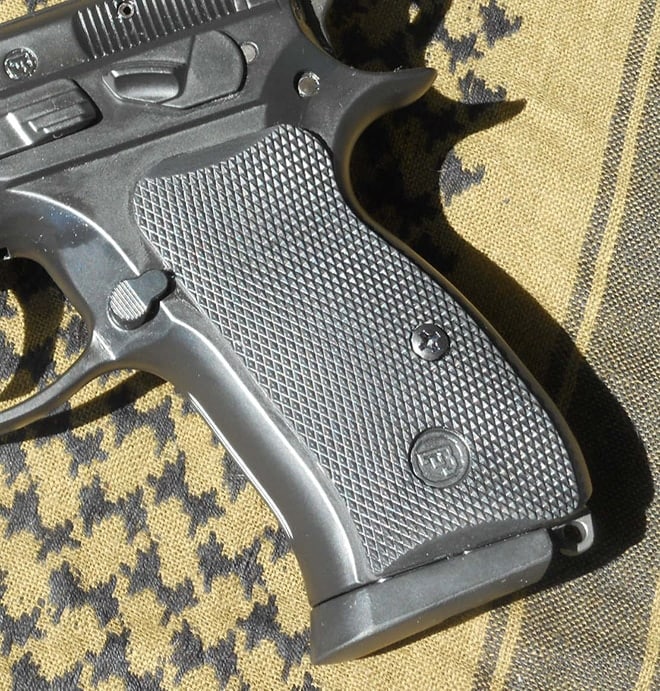 The P-01 differs the most from the original CZ-75 in that it has a full-length dust cover with an integral 1913 rail. Certainly an upgrade for those who feel every handgun needs rails. The finish is CZ’s black polycoat, which is smooth and soft to the touch, but looks like plain black paint. The sights are fixed, three dot, and glow-in-the-dark. Though not true night sights, they do their job with a bright enough light. The grips are checkered black rubber, and lend the P-01 a very comfortable grip. As we all know, the CZ-75 is praised far and wide for the shape of it’s grip and the P-01 is no different. The magazines included carry 14 rounds and have an enlarged rubber baseplate to ensure a proper grip with all fingers.

Like the 1911 and the Hi-Power, the P-01 places all of the controls where God and John Browning intended them to be. The slide release is positioned and shaped well enough that the shooter does not have to shift the gun around in his hands to hit it. The P-01 also ships from the factory with a de-cocker installed with parts to convert it to a safety also included. Personally, I prefer the de-cocker. 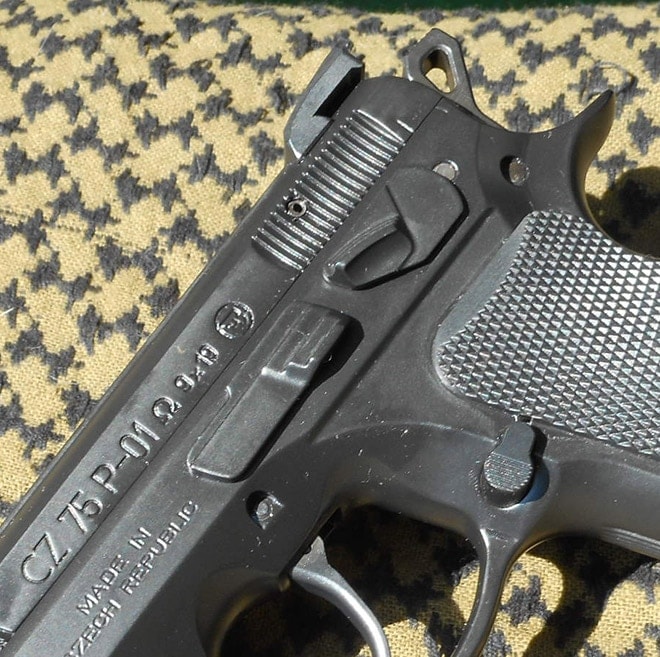 There are slide serrations both rear and forward. Like all CZ-75s, the slide rides inside the frame. Though it possibly makes for better accuracy, the downside is that there isn’t much real estate to grasp the slide. This must be taken into account when purchasing the pistol. There is also a lanyard ring present intended for military and law-enforcement. Civilian shooters can have fun by hanging all sorts of keychains from the lanyard ring for fun on the range.

It’s not the most attractive pistol — CZ-75 line handguns aren’t exactly known for their beauty, but they are known for being tanks. The P-01 is no different, built like a tank and looking like one too. While the frame is made of a forged aluminum alloy, it still has enough heft that it doesn’t feel unbalanced.

At the range the P-01 can be summed up with one word: disappointing. I was worried when the test target that shipped with the pistols showed a grouping of 4 inches at 25 meters. Not great, but I reasoned that the shooter must have had a bad day or was simply using faulty ammo. 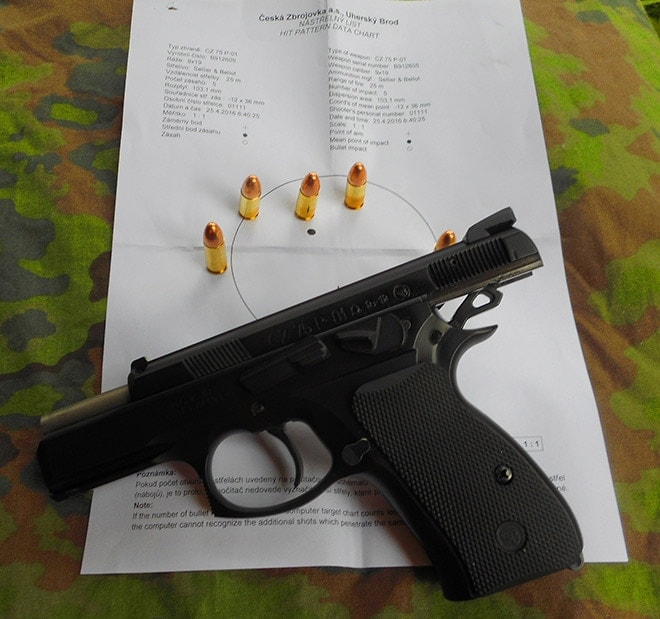 I hit the range with high hopes and a variety of FMJ including 115 grain Federal, Armscor, and Blazer Brass; 124 grain Aguila; and even some 135 grain Hornady Critical Duty. Unfortunately the test target didn’t lie. Most of my five-round groups averaged around three to four inches at 10 yards no matter which ammo I used. The P-01 also shot low, leading me to think the sights are regulated at 25 meters (27 yards). While disappointing, I did find that it reliably cycled the Critical Duty loads, which I prefer for home defense. 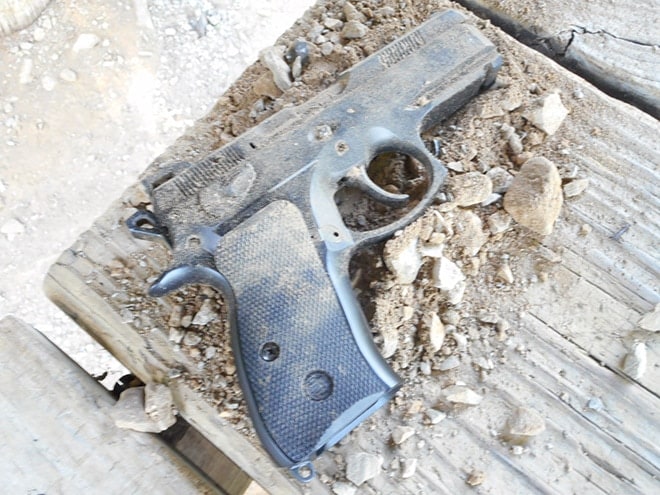 Getting ready for my bathed in grit torture test. (Photo: Francis Borek)

Despite the mediocre accuracy I decided to put it through a little torture test by pouring fine dirt and pebbles all over the pistol. Thanks to the full-length dust cover, the P-01 performed reliably despite the amount of grit that got into the pistol.

During another shooting session, I noticed a strange failure. While shooting CCI Blazer, the de-cocker seemingly flipped ever so slightly upwards. This blocked the trigger and acted like an engaged safety. It happened on the next round as well. The fix was to simply press the de-cocker down. I reasoned I had limp-wristed the pistol and in another 250 rounds the pistol performed flawlessly. Although the failure was (possibly) my fault, it was also a little disconcerting. 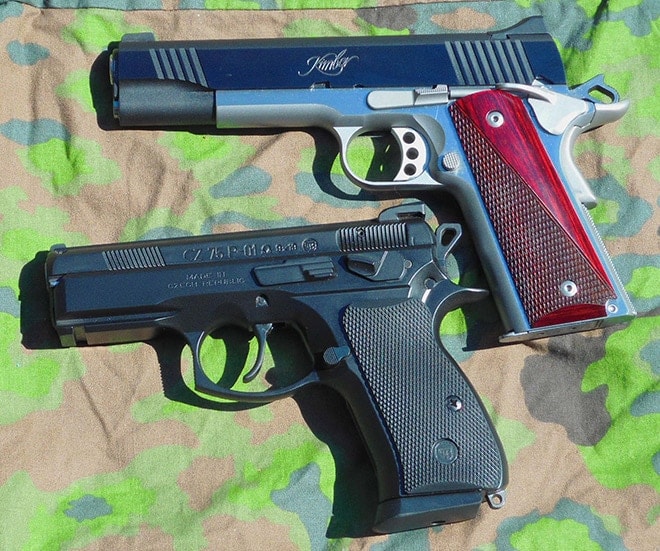 So does the P-01 Omega live up to the CZ-75 name? Well it did cycle whatever I put through it, even when covered in grit. However the odd failures and the mediocre accuracy also have to be taken into account. At the end of the day, I do believe that this gun, at least partially, lives up to the legend.

Remember, the P-01 is not a target pistol — it’s a working pistol meant for carry and service use. Yes, the accuracy was disappointing, but it still grouped inside the size of a human torso. It’s not the gun you leave out on the shelf to admire its beauty, it’s the gun you leave by the bedside or carry in your holster. Sure it had it’s strange failures, but then again any handgun can fail when it’s limp wristed. Rally Vincent wouldn’t be too impressed with it, but the P-01 is still a reliable handgun.