Taylor’s & Company Firearms , in Winchester, Virginia, specializes in historic reproductions.  Tucked away in the Appalachians, Taylor’s handles the needs of reenactors, cowboy action shooter, and collectors who want guns they can afford (and afford to shoot).

So let’s go back a bit. Memorial Day was originally known as Decoration Day, and it was a holiday meant to commemorate those who served and died during the Civil War.  Many who survived the war went on to serve in the west.  Some of those men were later issued Single Action Army revolvers.  And many more veterans carried their old Colts to their graves.

A brief brief history of the 1873 Colt Single Action Army

At the end of the Civil War, as wartime production shifted to technological innovations, the revolver evolved substantially.  The most noticeable change was the shift from black powder to cartridges.  And the increase in power necessitated a more solid top strap on the frame.  The availability of steel meant less reliance on brass in the frames.

Colt’s Manufacturing created the most widely respected and iconic revolver of this era.  The M1873.  The Model P.  The Single Action Army.  The Peacemaker.  Call it what you will, Colt’s gun won the US service revolver trials of 1872 and stayed in service until 1892, when the automatic pistol was in its infancy.

The Single Action Army was a tremendous gun.  The Cavalry models’ barrels were 7.5-inches long, and accurate.  An Artillery model came in at 5.5 inches, and the barrels were whittled down to under four inches for those who wanted something a bit more concealable.

The action of the revolver was reliable.  The guns were issued in .45 Colt at first.  Later civilian versions would be chambered in almost every imaginable configuration, one of the most logical being the .44-40 (which meant one cartridge could be used in either a Winchester 1873 rifle and a Colt 1873).

A commemorative version with a bit more flair

So how do we go from the gun pictured above to Taylor’s excellent reproduction of something much more flashy?  The process has roots in history.  Many of the guns issued to ranking military leaders in the 19th and 20th centuries were highly ornate.  While the bore a resemblance to their service counterparts, these revolvers were often engraved, plated, and given new, sometimes carved, grips.

Taylor’s Cattleman comes in several variations.  This one is, obviously, engraved. And it is really nice.  The aestheitc is distinctly western, from that era of finely tooled leather holsters that we associate with anachronistic cowboy costumes. 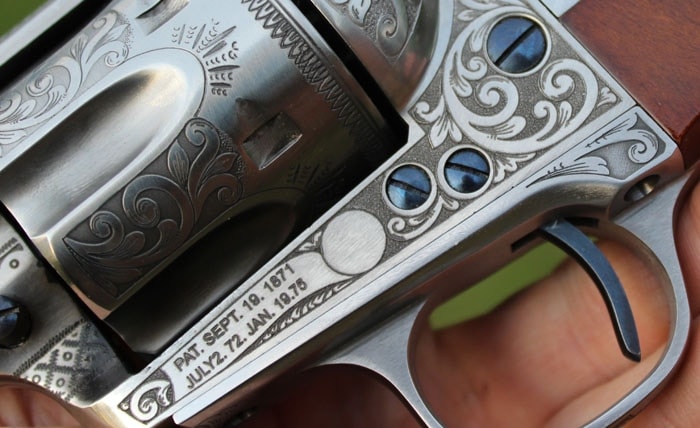 And it is beautiful.  The Cattleman begins life as a Uberti.  The engraving is done with a laser.  After, craftsmen chase the engraving, insuring that the mechanical look that the laser leaves behind disappears.  The result is an affordable way to get a highly decorative gun. 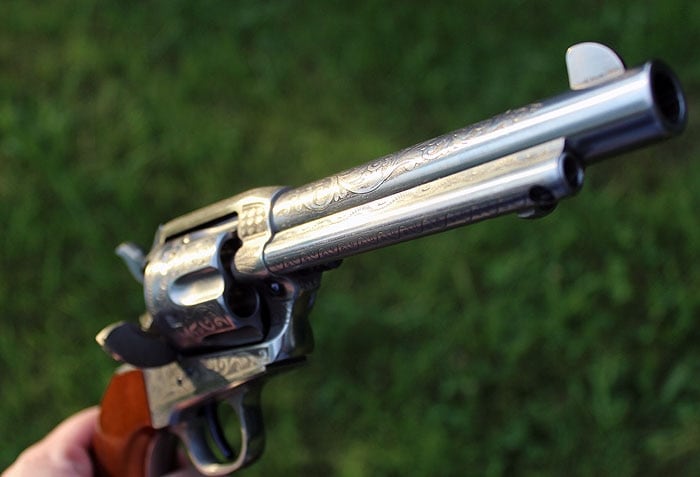 The Taylor’s Cattleman may not immediately remind anyone of past military service, but that’s where the entire lineage of the Single Action began.  All of the countless variations, including this sharp, high tech Cattleman, began as fighting guns.

“Why a man ain’t complete without a gun.”

Except the fights we tend to associate with the Peacemaker are more cinematic, and often involve civilians settling scores in a stylized lawless west.  Check the roll-call at IMFDB.com.  The Single Action Army has been a movie star since 1915.

One of the best involves an actor we don’t often associate with westerns, carrying a pair of shiny engraved Peacemakers that look a lot like Taylor’s engraved Cattleman.  Dustin Hoffman, in 1970, played Little Big Man.  This is an epic tragic comedy about a lost soul wandering between various cultures in the west.  During his gunfighter phase, Little Big Man picks up some skills from his sister.

“Draw and shoot the bottle, before you touch the gun.”  For those of you who haven’t already seen the movie, see it.  It is one of the best.  And the 1964 novel, by Thomas Berger, kicks ass, too.

But let’s get back to the Cattleman

Beyond the engraving, Taylor’s Cattleman has a nice feature that wasn’t available on the originals, and that is a hammer safety.  This small wedge of steel rises when the hammer is pulled back to the first click and keeps the pin from striking a primer if the gun is dropped. 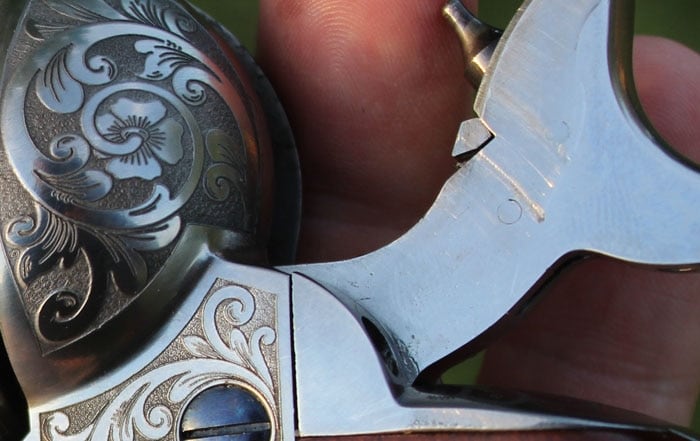 That makes the Taylor’s a useful gun to carry or compete with.  While there are no external safeties on the Cattleman, it is more safe to carry with six rounds in the cylinder than most Single Action Army models.

And this picture above is a good closeup of the engraving style.  What differentiates the laser engraving from the (much more expensive) hand engraving is the depth of the carving and the three dimensionality of the work.  The perception of depth is created by the stippling in the negative space, and by the line work in the raised portions.

And that’s what makes the Taylor’s Cattleman perfect.  It looks incredible.  From any distance, and I’m talking inches really, the Cattleman looks like a much more expensive gun.  No, it is not an American made, hand engraved safe queen.  It is a laser engraved, Italian reproduction.  As such, we can afford it.  And we can afford to shoot it. 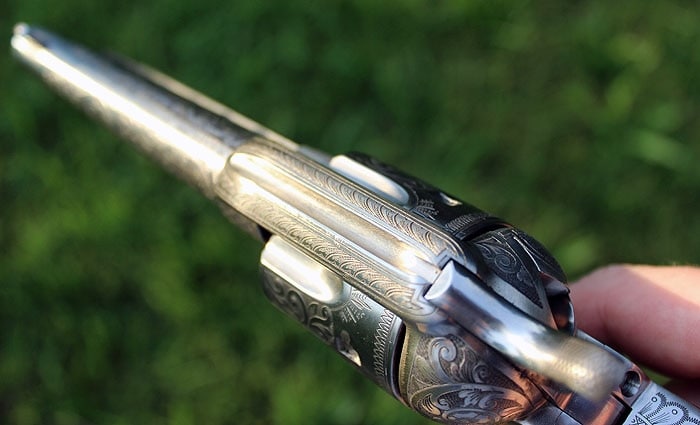 This version of the Cattleman sells for somewhere in the low $800 region.  At that price, this gun is a steal.  I’ve handled a lot of American made Peacemakers, and even more imports, and this one is among the best.  There are no hitches in the action.  It can run faster than I can (which isn’t all that fast, really, but still).  And it is dead on accurate. 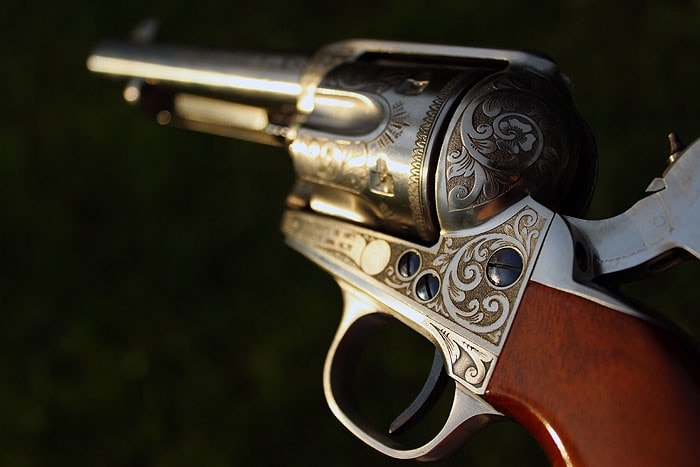 None of the other 1873 Single Actions I’ve shot have looked as flashy as the Cattleman.  And if that’s what you’re into, than this is the Peacemaker for you.  While it would look a bit silly tucked in a black leather flap holster, worn on navy blue wool, it looks great in a oiled, hand tooled holster.  Just make sure you are wearing your rhinestones, and a tall white hat.

This is the first of Taylor’s guns that I’ve shot, too.  And I’m impressed.  Give their catalog a look.  Their service, and their guns too, is impressive.