Gun Review: Ed Brown Damara: Everything you expect from a scout rifle, but would you sell a kidney for it?

They no longer do so, but for a while Ed Brown Products offered some amazing rifles. Occasionally you will find one of these available for sale, most likely used, and if you do you’ll probably first notice and then wonder about the asking price. That’s because, unless you are very lucky, it’ll cost around $3,000. And if it comes with one of Brown’s installed Swarovski or Nightforce scopes, you could be looking at about that much plus half or more. 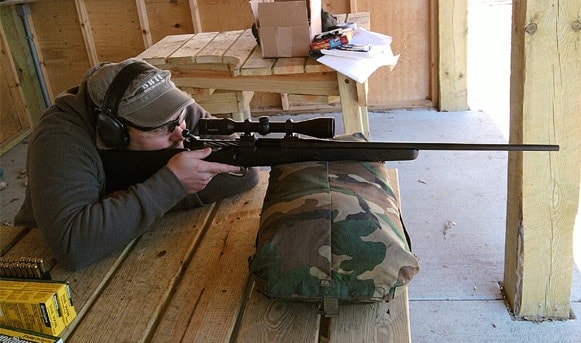 It certainly is a big chunk of money, but it’s a pretty high-end rifle with all the trimmings. The Damara model in .308 I shot, with a couple of Ballistics By The Inch buddies, was one hell of a nice rifle – quite possibly the best I’ve ever shot.

Looking at price, quality and performance, it begs the question, “Is it worth it?”

Ed Brown’s Damara rifle is something of an answer to the Steyr Scout, a fairly small, fairly lightweight bolt-action rifle in a caliber sufficient for hunting almost any game, or use in fighting out to ranges of about 400 yards. This was an idea developed in conjunction with the legendary Jeff Cooper.

What makes the Damara, as described by Ed Brown, so special is that it is light in weight, but balanced for accurate shooting. The reason is it’s equipped with an very lightweight graphite stock and special barrel contours that aid in balancing it. The keyword being balance.

“Many shooters get confused about choosing a light weight rifle. The lightest you can find certainly isn’t “best.” Balance is much more important than weight,” Brown explained. “We don’t try to make a super lightweight rifle by compromising safety and accuracy, even though we are certainly capable of it. We feel you need a certain amount of weight, and particularly rigidity, to shoot a rifle accurately, and you need balance most of all.”

And he added, “The design and weight of the Damara is perfectly positioned between too light and ‘heavier than necessary.’”

My take on shooting the Damara

In my limited experience with the Damara, the gun lived up to every bit of Brown’s description. The overall weight of the gun (and Swarovski scope) was less than seven pounds. It had a 24-inch Match grade, hand lapped and precision chambered Shilen barrel, stainless steel with black Gen III coating for superior rust protection. The trigger was a jeweled action, fully adjustable and phenomenally smooth, breaking at about two pounds. The bolt action was Ed Brown’s M-704 controlled feed action – smooth, solid and tight. The barrel is hand-bedded. Everything about it is designed for reliable accuracy. 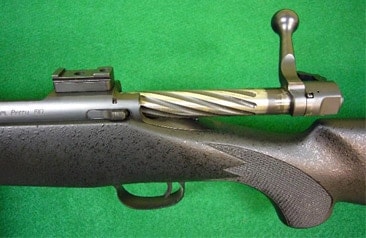 To answer that question, “Yes, it was.” And it was easier to be accurate with it than with the Steyr Scout because of the superior optics on the gun.

The Swarovski scope, a Z6 2.5-15×56, was incredibly clear, and it was easy to get sub-MOA hits, even for someone who isn’t that good a shot, shooting from a simple bench rest.

Where the Scout wasn’t really intended to be a target rifle, the Damara could fill that role admirably.

The fit and finish were excellent — superior, even. There is very little about the Damara that doesn’t feel like a classic high-end hunting rifle and those parts that are less traditional, such as the stock, don’t feel like a compromise. The graphite stock felt solid and secure – not at all ‘plastic’. Even the Pachmeyer rubber recoil pad seemed perfectly mated to the gun.

As I noted in my Steyr Scout review, there’s just something about a well-designed bolt-action rifle that I really like. The Steyr Scout in .308 Winchester was one of the best I’ve ever shot, but the Damara was even better. Honestly, I don’t think I’ve ever shot another bolt action that could beat it.

Was it worth the $5,000 to $6,000 you’d probably spend to get it set up the way the one I shot was? I suppose it all depends on how flush you’re feeling. I wouldn’t sell a kidney to go buy one, but if I happened to have some extra money hanging around with nowhere to go…