Thought that accurate .22 Magnum pistols were dead?  Think again.  Excel Arms of California has quietly been turning out stainless semi-autos that are 100% USA-made with a full lifetime warranty.  Guns.com finds out whether that’s too good to be true or a well-kept secret.

A scarcity of .22 WMR pistols 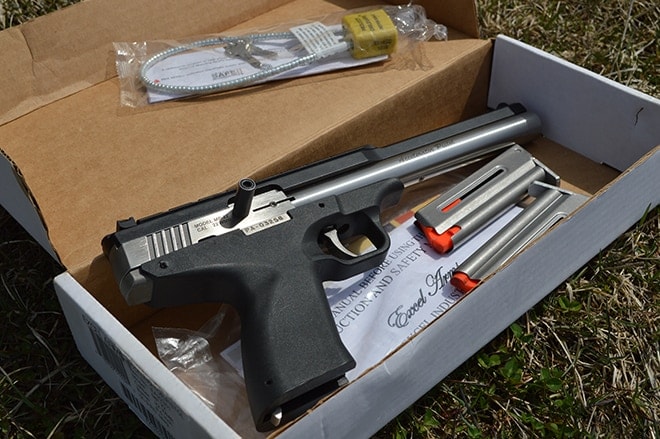 While rimfire magnum revolvers are plenty, there have only been a handful of .22 Magnum pistols built over the years, with many having since fallen into obsolescence.  Though the once-popular AMT Automag was reborn by High Standard as the Automag II, the guns availability has waned in the last few years.  The main competitors on the magnum rimfire market now are Keltec’s PMR 30, a high capacity, polymer-framed pistol and the heavy-built stainless Excel Accelerator. 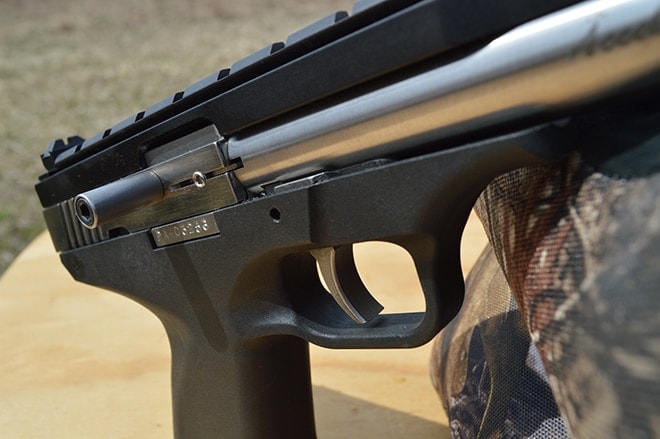 Unlike many rimfire pistols, the MP-22 is built of a stainless and polymer combination and is a hefty piece, tipping the scales at 54 ounces.  To save some calculation time, that’s 3.375 pounds. Much of the gun’s weight comes from the 8.5” long stainless bull barrel, with a 0.875” diameter and recessed target crown, though the gun is not overly front heavy.  The MP-22 is a single-action, semi-automatic pistol with an internal hammer, firing pin block, and last-round hold open with a black polymer grip frame. 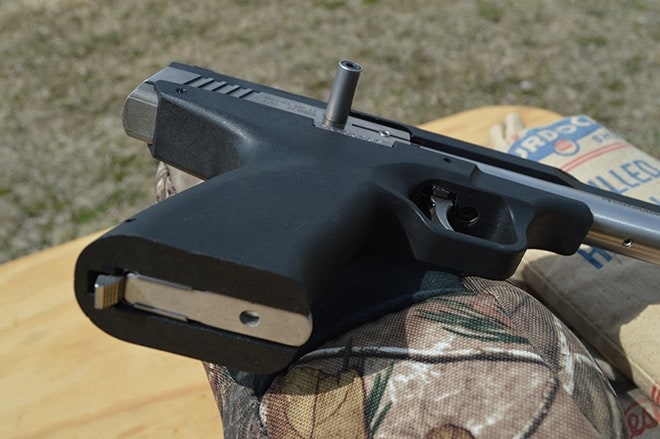 The Accelerator wears a full-length integral aluminum weaver base that remains fixed while the slide is operated.  Like the barrel, the slide is also built of 17-4 stainless and wears a ramp front sight and fully-adjustable rear target sight.  Excel’s white branded cardboard box packaging includes two nine-round magazines, a mag loading tool, an Allen wrench, and a California-compliant cable lock.  MSRP on our MP-22 pistol is $477. 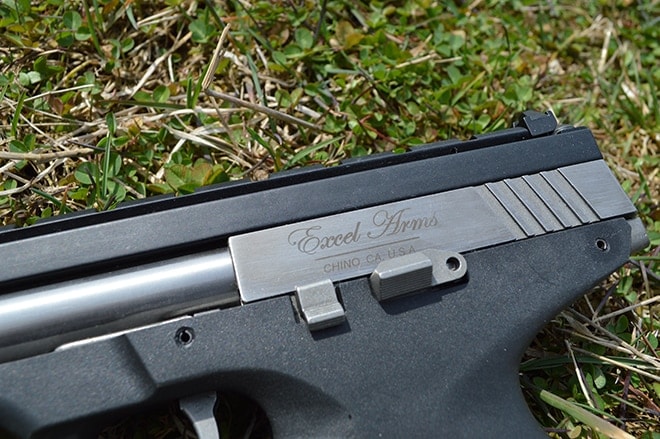 Excel Industries is based in California with a second manufacturing facility in Bullhead City, Arizona.  In addition to rifles and bullpup pistols, the company also builds another version of the Accelerator pistol chambered for the zippy 5.7×28 round.  Both the MP-22 and the MP-5.7 are available in two optic-combo options, one with a red dot and the other a 2-7×32 pistol scope. These 100% American-made pistols are covered by an industry-leading lifetime warranty. 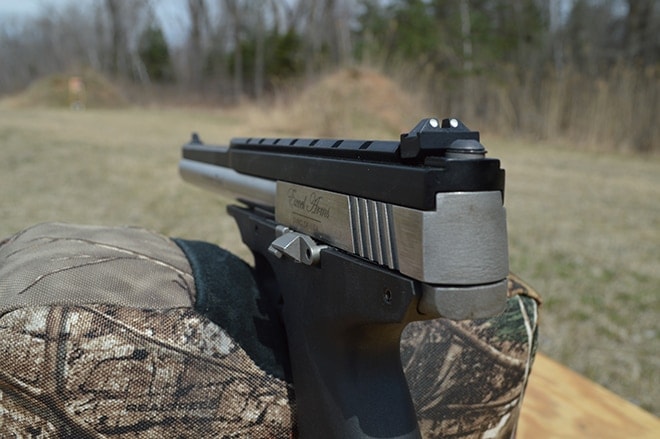 We shot our Excel Accelerator MP-22 first with open sights, and found the rear adjustable to be clean, easy-to-use, and higher quality than expected.  We then attached a Sightmark holographic optic, and found the effective range for sub-2” groups to be about 75 yards.  After mounting a Redfield 2-7×32 pistol scope later in testing, we were confident on varmint size targets out to at least 100 yards in both accuracy and performance from a solid rest.  The options for the Accelerator pistol are many when it comes to both optics choices and vermin targets. 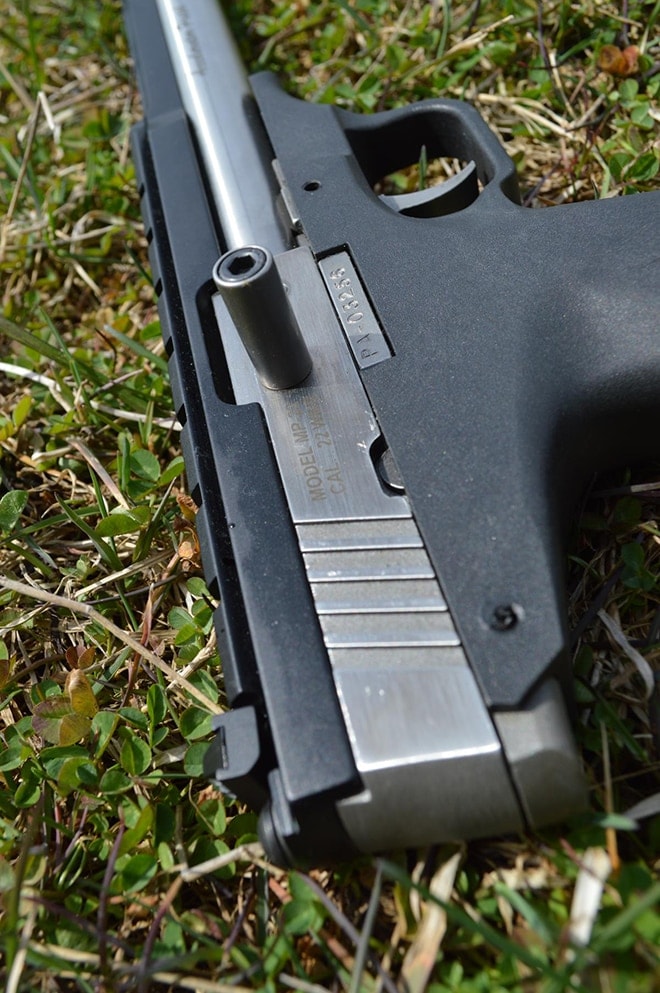 Though the pistol is ideal for most shooters, lefties will find using the MP-22 more difficult, as neither the slide release nor thumb safety are ambidextrous.  The trigger, however is well-sized, with it’s extra width being reminiscent of target-style triggers sans serrations.  The biggest knock on our MP-22 though, was the trigger pull itself, which broke right around the eight-pound mark on the Lyman digital gauge. Takeup, however, was average and creep-free.   With practice, we were able to hit well with the pistol, but the trigger pull is its biggest setback.

Nonetheless, the Accelerator is an easy pistol to learn to shoot well.  It has great potential as an enjoyable backup prairie dog or vermin gun and is equally at home on the bench for some target shooting.  Only the current scarcity and rising price of .22 WMR ammunition can limit the fun with Excel’s MP-22.

Hot & heavy ammo for the Accelerator 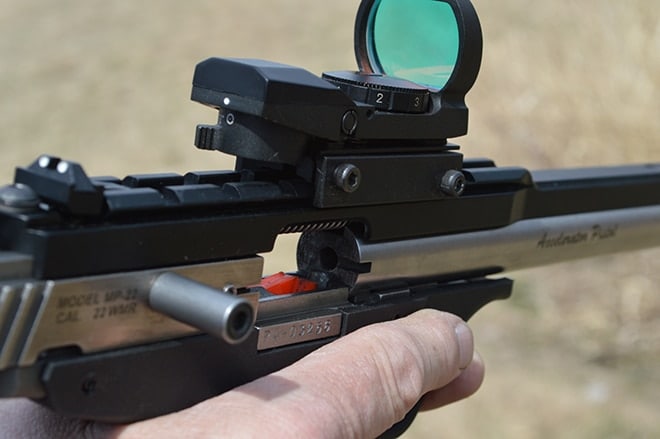 The Excel company is very clear both on the website and in the instruction manual that shooters must use .22 Magnum ammunition with a velocity of at least 1800 fps and a 40 grain bullet to cycle the semi-automatic pistol.  They clearly state “do not use ammunition manufactured for short barrel revolvers even though they are 40 grain bullets, they only have a velocity of 900-1200 fps which is not enough to cycle a semi-automatic firearm.” 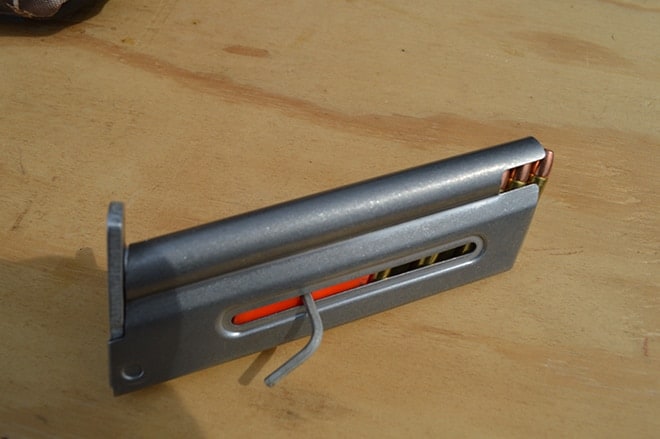 Loading the mags (2 included) could be a chore without a tool. (Photo: Kristin Alberts)

Though Excel recommends a break-in period for the pistol, ours came to us already fired, and we experienced 100% chambering, extraction, and ejection after 200 rounds.  We fired a combination of Hornady Critical Defense 45-grain FTX,   CCI Maxi Mag’s 40-grain, and Hornady 30-grain V-Max.  All shot well, though to slightly different points of impact.  Even the lighter-than-recommended 30-grain V-Max rounds cycled well and actually offered some of the nicest longer range groups. 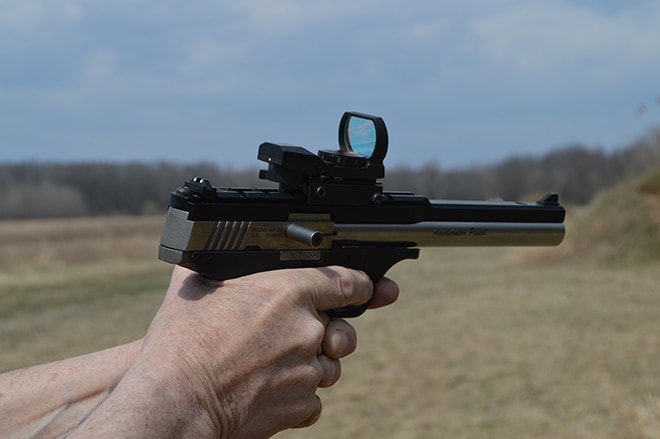 Given the weighty build of the MP-22, recoil is non-existent which makes follow-up hunting shots a snap.  Loading magazines is the biggest chore of all, as the mag springs are quite strong, even after extended shooting.  Loading is eased by use of the included tool, which we somehow misplaced in the field.  We were, however, able to substitute the included Allen wrench through the hole in the mag follower.  The pistol’s base magazine release lever is stout and easy to operate, making quick mag changes a breeze.  Slide serrations make working the action simple, even for those with smaller or weaker hands. 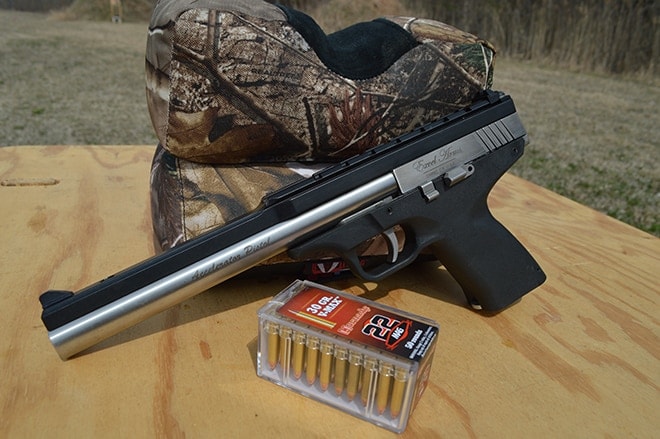 The Excel Accelerator MP-22 semi-automatic is a solid, accurate, affordable rimfire pistol option for hunters, plinkers, and target shooters.  Whether you choose a chambering in .22 WMR or the hard-charging newer 5.7×28 round, Excel’s Accelerator line of pistols are built to perform–and with a lifetime warranty–built to last.