I’m not a huge fan of the AR pistol platform.  AR-15 rifles, yes.  Short barreled AR rifles, yes.  But when you take the stock off of an SBR, all you have left is a heavy pistol, and one that is much harder to handle.  I’ve never understood why anyone would want a pistol that’s hard to conceal and control, and one that reduces the efficacy of the round it shoots.

But the Extar EXP just might change my mind.  This AR pistol is as easy to use as any big revolver.  The EXP feels less like an amputated rifle than it does an actual pistol.

The Extar EXP-556 is a semi automatic gas operated pistol chambered in .223 / 5.56.  It takes typical AR magazines.  The gun weighs three pounds empty, and about four and a half pounds with a loaded thirty round magazine.  From end to end, the EXP is eighteen inches long, and the barrel is eight and a quarter inches. 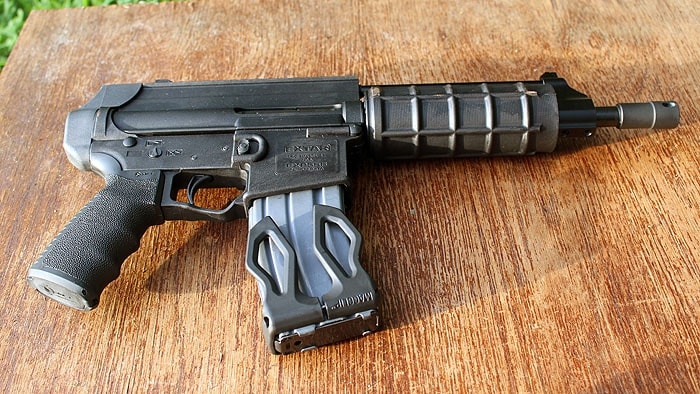 The barrel has a 1:9 twist rate, and is threaded.  Just behind the muzzle break is a gas block that doubles as the front sight.  The handguard is polymer, as is the lower, upper, and rail.

Extar, who makes the EXP in Arizona, has cut out many of the AR features on the EXP.  This paring down gives the EXP a minimalist feel, and lightens the gun significantly.  It has no buffer tube, for example.  They’ve removed the dust cover from the chamber.  Even the over-sized trigger guard is integrated into the design, and made of polymer. 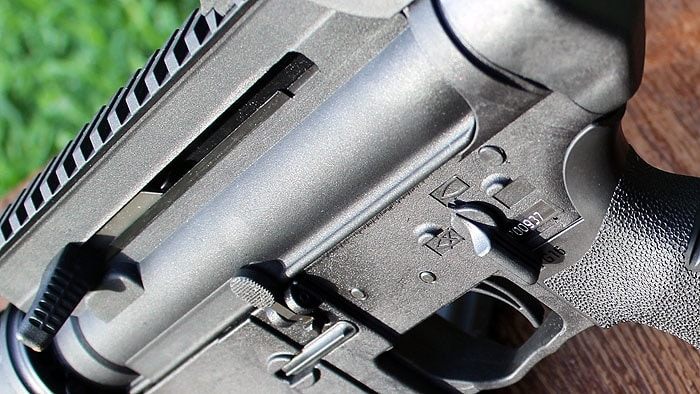 The grip and handguard are two of the customizable features on the EXP.  Though they can be changed, I’m not sure they need to be.  The grip is from Mission First Tactical, and has a capped storage space inside.  The handguard, which is free floating, is solid and easy to hold.  The reversible safety accommodates lefties.

I’m especially fond of the trigger.  When the gun is cocked, the trigger sets up firm.  There’s no take up at all.  It is solid, and breaks clean just over five pounds.  This is key to the success of a gun like this, that can be held one handed.  With the crisp trigger, there isn’t extraneous movement to take you off target. 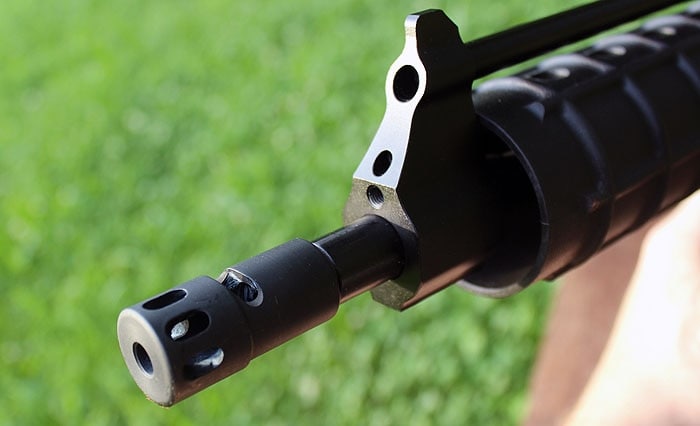 The muzzle device is extremely effective.  While it does nothing to hide the flash, it angles the force of the escaping gas up.  This pushes the barrel down.  There’s no appreciable recoil on the EXP, and the gun seems to move down when you shoot.  Even fast repeat shots don’t create muzzle climb. 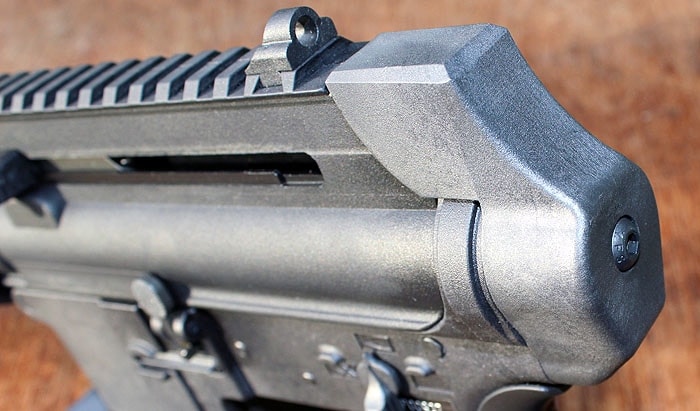 The AR pistol is accurate enough.  While not as capable as a rifle, an eight inch barreled EXP should exceed the accuracy of most handguns.  Yet the sights don’t really inspire that kind of confidence.

This isn’t a criticism of Extar or the EXP.  Instead, I think Extar is acknowledging something about the AR pistol as a philosophy.  It isn’t meant for precision shooting.  This isn’t an MOA gun.  It is meant to put rounds down range, and fast.

Take the rear sight, for example.  It is polymer dovetailed into a cut in the polymer rail.  It is a no-frills ghost-ring.  And it works just fine. 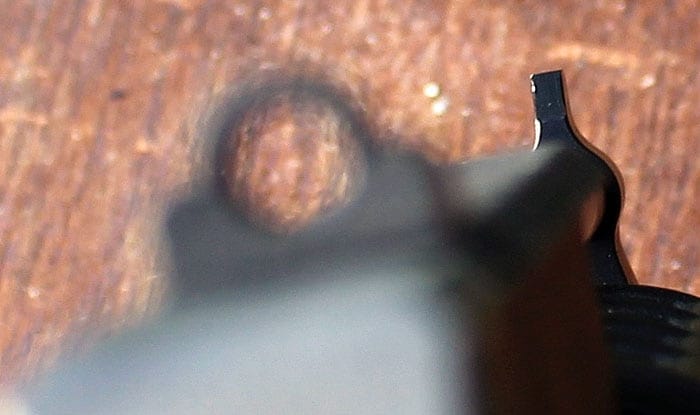 Twelve inches ahead on the gas block is a wide blade front sight.  It isn’t adjustable.  And it is wide.  Wide sights are fast, because they’re easy to see.  They are not accurate.  And that bears out on the EXP.  When shooting from a standard two handed position from 25 yards, I can group shots in a three inch circle.

Maybe I’m off with this assessment, but I don’t feel like that’s the purpose of the EXP.  After a magazine’s worth of standing and shooting, I opened it up.  Double taps.  Five round groups.  One handed shots.  This is where the EXP realy opens up.

And I think this is how the EXP’s accuracy should be measured.  The low recoil and fast recovery time allows for target acquisition. From 25 yards, you can dump 30 rounds into a twelve inch target.  Fast.  And that makes the EXP highly effective.

Our friends at Ballistics by the Inch have data that shows relative speeds of bullets from rifles of differing lengths.  A 16″ barreled rifle, shooting a 55 grain .223 bullet can be expected generate somewhere close to 3,000 fps at the muzzle.  From a 8″ barrel that drops to closer to 2,400.  It isn’t as significant a drop as I expected, actually.

The rail on the Extar will allow for any optics you might want.  But watch the weight.  The more you put up top, the harder it will be to hold at arm’s length.  The Trijicon RMR, or something similar may be the logical choice.

There’s no good place to attach a sling.  I’m still working on that.  It needs one.

Other than that, problems were minimal.  We shot more than 200 rounds without a single failure.  After that, the EXP was getting grimy and the brass started sticking in the chamber.  The extractor would pop off.  The next round would then jam up under the rim of the spent brass in the chamber, requiring a magazine drop, live round extraction, and then a cycling of the bolt.  After a basic cleaning, the EXP ran fine again.

The end or the beginning?

Extar is going to sell as many of these as they can build.  They are selling for under $600.  And that’s now, when prices for black rifles are still a bit higher than what I would consider normal.  Once supply and demand level off a bit, the price may drop as low as $500.  And at that price, they will be hard to resist. 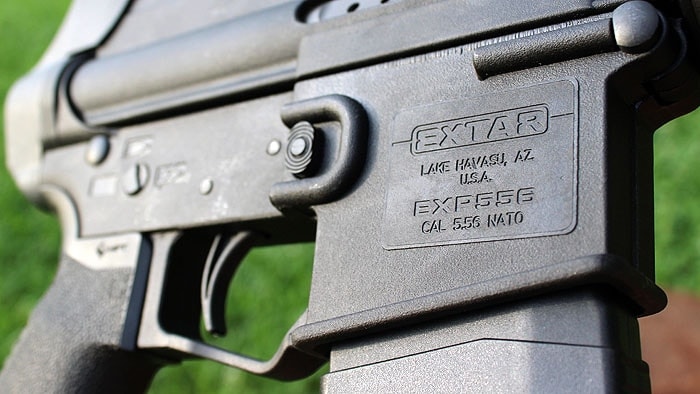 I think Extar has nailed it.  I’ll admit that I wasn’t fully on board with the idea when I first saw the press releases.  But when the gun arrived, I was impressed by the commitment to cutting weight.  And the trigger.  After the few shots, I was hooked.  Though what they’ve done might seem like a subtle refinement of an existing idea, I think Extar has charted a new course for the AR pistol.  And I can’t wait to see what they do next.