Late last fall, I had this hankering for another AR-15.  I’d reviewed  Colt’s LE 6920 and loved it, but I had to return it to Colt.  I’d heard great things about Stag and wanted to see how their guns stacked up to Colt’s (still the industry standard).  But there’s no comparing the rifle I received.

I’d expected a Stag Model 2.  But when I opened up the box, I was looking at something completely different.  The Stag Model 3G.

In the interest of full disclosure, I would like to note that this AR came in for review in mid December.  In the weeks after this rifle arrived, I watched every available AR disappear.  Notices went up on websites alerting customers to low availability. Then year long waits.  Stag isn’t even taking orders for rifles now, as their backlog has stretched out so long. 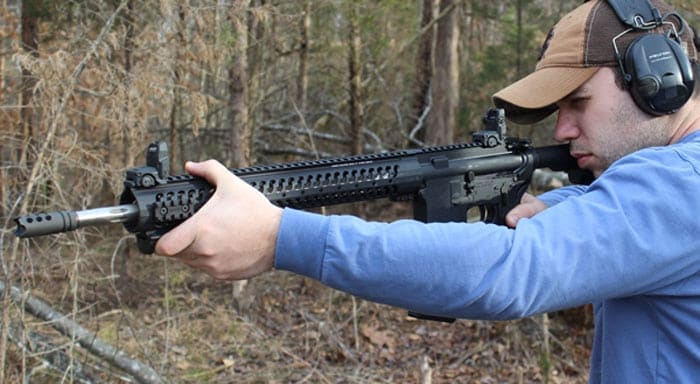 So I was lucky to get this beauty.  My request, and Stag’s shipment, could not have been any more timely.  I’m not sure when I’ll get another AR in for review.  So I’ll be spending some time with the Model 3G.  And I have no complaints about that.

The basic entry level AR-15 (with a 16-inch barrel, some adjustable furniture, and a removable carrying handle over a short section of rail) is designed to be a compact and versatile gun.  And while the basic AR is popular for three gun competitions, many three gun shooters will modify their ARs until they are finely tuned machines dedicated to the demands of competition.

And Stag has competition in mind.  The most noticeable distinction on the Model 3G is the long free float Samson Evolution tube.  Under this is an 18-inch stainless (and fluted) barrel.  The barrel is capped with a unique compensator.  The gas system is rifle length.  At the back end, the stock is a Magpul ACS.  And the trigger, which is the hardest part to describe, is a Geissele Super 3 Gun.

The result is a typical (or at least typical Stag, which is a step up from typical) AR-15 that is designed for a specific purpose.  The MSRP on this, back when you could still find one for sale, was $1,459.  That’s not bad.  MSRP on a Stag Model 2 is $940.  So the extra $500 is accounted for in the extras.  And Stag is using their bulk buying to add those extras at a price that is far lower than you would find retail.

Three gun, as a philosophy, is simply a timed shooting course.  As the name suggests, it involves three guns: a pistol, a rifle and a shotgun.  There is typically a lot of movement.  Participants are scored by several various methods, but almost all include a mix of time and accuracy.  Each competition is divided into different classes, which allow for differing calibers and modification (like iron sights, or optics).

While many participants run the courses with basic guns and more traditional gear, others spend thousands of dollars building racing guns and custom rigs to hold ammo.  The end result looks almost as diverse as automobile racing.  What may have begun as friendly competition with stock (and I mean basic, not NASCAR) cars, has evolved into Formula One racing.

Back to the 3G

The parts that are made by Stag are finished nicely and the aftermarket additions are well built, and well thought out.

The Samson rail allows for endless combinations of optics, lights, grips, straps, sights, etc.  And it is rigid.  My first impressions weren’t so positive, as the gun is no heavier than a typical AR.  I didn’t trust the free float tube.  But I’ve grown accustomed to the false feeling of fragility, and have beaten it up good.  No problems.  It is solid.

The trigger is new to me, too.  It breaks at 3.5 pounds.  It is a cross between a two stage trigger and a set trigger.  There is a (brief) moment of take up, and then the break.  I learned the hold point, but it took me a number of rounds.  This is great practice for me, as I like to take up the slack while I’m perfecting a sight picture.  The 3G’s trigger is meant for more immediate action. 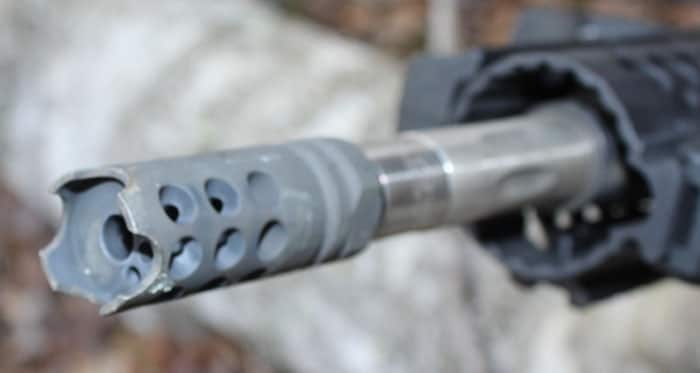 The muzzle break is a work of art.  It’s ported on the top and it’s so effective that I felt like it pushed the muzzle down slightly.  In a firm hold, repeat shots are effortless.  With the speed of the trigger, and the lack of muzzle-rise, the 3G is capable of nailing fast repeat shots well within the grouping desired for three gun matches.

The Magpul furniture is what you’d expect from Magpul.  Durable, ingenious, and functional.  The stock has flared sides which allow for a bit of extra storage and easier cheek welds.

The gun itself will require very little modification.  I’d change out the trigger guard.  It is a bit plain for my taste, and the edges are a sharp.  Everything else would be additions.  With a gun like the 3G, the only real decisions will have to do with optics, sights, grips, and maybe straps.  And we’ll be covering those in a separate piece. 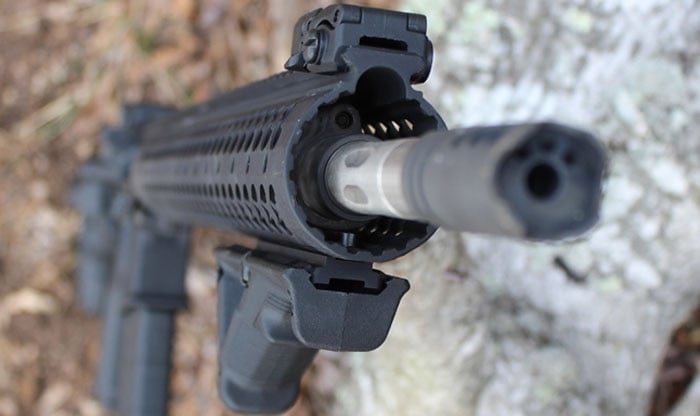 And I’m going to end with that: a promise of more to come.  We’re going to deck this gun out and put it through its paces.

As far as a basic AR, the 3G is amazing.  While it is a bit longer that a mil-spec AR, it is still functional for non three gun enthusiasts, too.  And that extra length and 1/8 twist in the barrel might make the 3G even better for varmint hunting.

But the 3G is designed for sport.  It is, at the end of the day, the thing so many people swear doesn’t actually exist: a modern sporting rifle.