Enfield.  Now there’s a gun with some history.  The Lee-Enfield was the go-to rifle of the Brits for the first half of the twentieth century.  The gun is still in service in some of the former colonies.  But there’s a new Enfield that bears little resemblence to the old bolt action .303s.  A new Enfield Rifle Company is making an AR-15 they call the Modern Enfield Rifle Company 415 (MERC415) And it is a fine piece of work.

Let’s start with the company itself.  How do you stand out in a sea of companies making very similar rifles?  I bet I’m not the first to ask.  The AR-15 and the M4 begin with the philosophy of modularity.  Parts are supposed to be interchangeable.  For an armory that’s arming an army, that makes sense.  Drop in parts are a must.  Some companies establish themselves by simply meeting these standards.

But most civilian shooters, and even some LEOs, only make use of modularity when switching out pieces and parts in that never-ending quest for the perfect rifle.  The perfect fit.  The delicate mix of form and function.  Most of us hardly ever mess with the lower, or upper, or barrel. 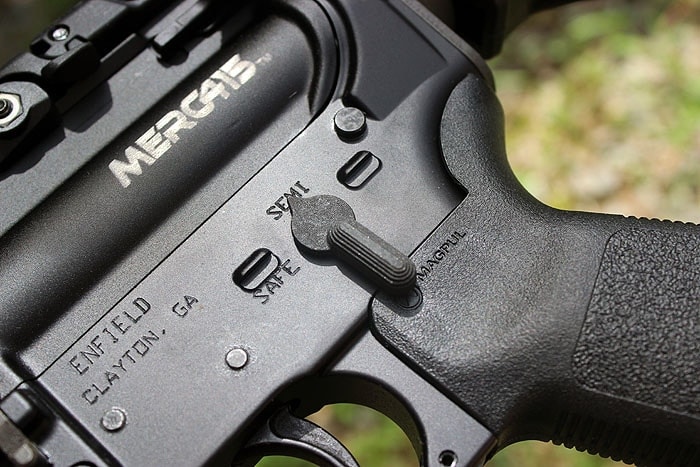 So we begin by looking for quality there.  And the Clayton, Georgia based Enfield Rifle Company delivers.  They make their own uppers and lowers.  Other parts are supplied by many of the same contractors that make parts for government contracts.  This approach isn’t unusual.  What is unique is that all of the various parts are assembled by one person.  Instead of assembly line production, each rifle is built by one craftsman.

And Enfield is debunking the mil-spec myth.  Instead, Enfield uses the phrase Mil-G.R.A.D.E.  Military-Government Requirements And Data Equivalent. “We don’t think most of what is being called ‘Mil-Spec’ is truly military specification,” says Enfield Chairman Nigel Boothe, “when taking into account what that literally means, so we needed a name to convey what we are doing,” 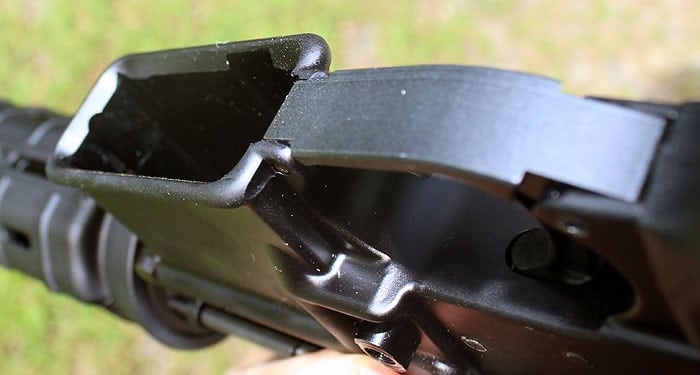 It doesn’t matter what they call it.  The rifle they’ve put together is a solid workhorse.

The 6.3 pound MERC415 is an homage to both the M4 and the AR-15.  With the stock collapsed, it comes in at 33 inches.  The carbine length barrel is 16 inches long.  The flat-top A3 style upper and the lowers are forged from 7075 aluminum and anodized.  The barrel has an M4 profile and is chrome lined.  The 1:7 twist is typical for the genre.  The gun has M4 feed ramps.  Everything is phosphated in a nice matte black.  In short, everything you’d look for in a solid, entry level gun is here. 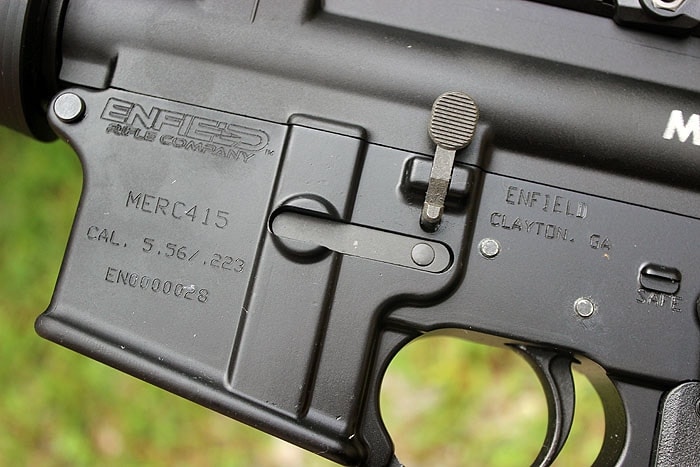 Yet Enfield does provide some extras.  The MERC415 comes stock with a Yankee Hill Aggressive Phantom flash suppressor.  The stock, forend, and grip are all Magpul.  The MERC415 even comes with a 30 round PMAG and an MBUS rear sight.  The end plate on the guns has a built in QD mount.  Yes it’s an extra, but nice to have.  And unlike many entry level ARs, the MERC415 ships in a foam lined plastic case.

Shortly after the rifle arrived for testing, I had an email from the folks at Enfield letting me know they’d sent out a rifle that hadn’t been zeroed.  That’s SOP, really.  I expect to have to zero a new gun.  So when we got out to the range, we clamped it down and fired three rounds from 50 yards.  Those first three rounds hit less than an inch above the red, and were grouped under two inches.  Even that minimal deviation might be explained by the fact that the vice was simply resting on a wooden picnic table.  And a one inch bulls-eye from 50 yards is damn small. 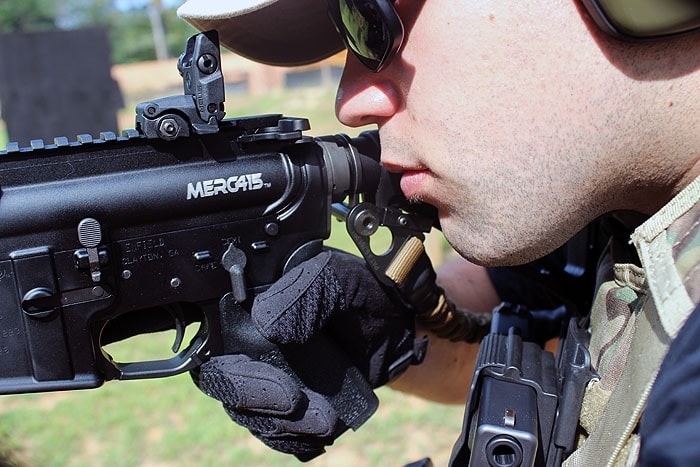 I wrote back to the factory that afternoon and told them they must have sent a zeroed rifle after-all.  They assured me that they hadn’t.  They know what a zeroed rifle looks like, though, and set each gun up to that standard.  Why?  They don’t have to.  They do it because it matters to them.

Out on the range, everything worked as it should.  As this was our first time with the gun, we kept it clean.  The only addition we made to the rifle was a Button Sling.  Everything else was stock.  And it all worked.  All of the levers and latches worked as expected.  The forward assist worked.  No feeding or extraction issues.  Recoil was light and the gun had almost no muzzle rise. 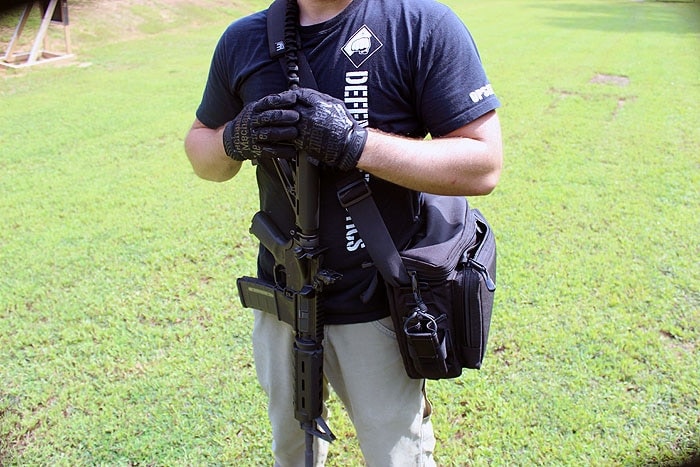 I’m not a fan of the Magpul forend.  I prefer something with more rail.  I know rail sections can be attached, but the forend is already big as it is.  That said, and it’s just my opinion, the grip did keep the heat from the hands.  After we’d established that it was shooting well, we blew through two magazines.  Magpul knows how to shield their forends. 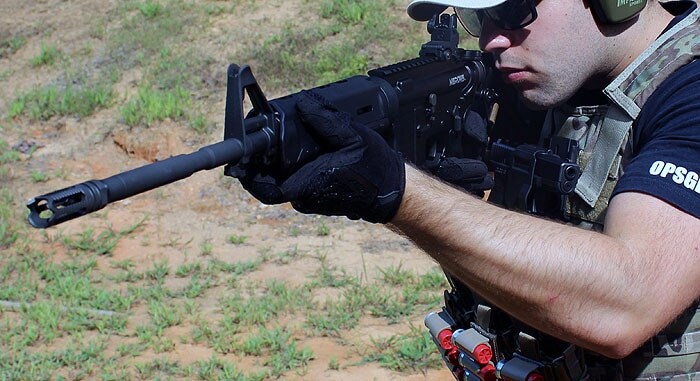 We worked with the gun for more than an hour in one session.  We used the MERC415 for this review, and a closer look at Button Sling, and for a review of Elite Survival System’s Discreet Escape Bag.  The rifle functioned flawlessly.  It ejected well. It fed like an M4 should.  Like any good AR, it accepted and dropped all of the various magazines we had on hand.

Same as it ever was

In the end, it will be hard to look at the MERC415 and say exactly what makes it different from all of the other M4 like rifles that have been through a bit of Magpul customization.  But isn’t that the point? 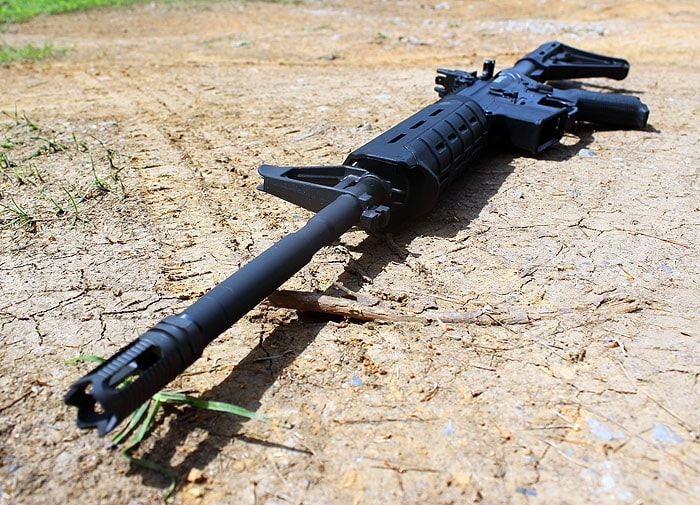 There is something that sets Enfield apart.  At least for now.  The only gun they’re offering is the MERC415.  And their single-craftsman-build-model means each of these rifles gets the same sort of attention that many of the more fashionable rifle companies reserve for their higher priced guns.  Not the guns that roll off assembly lines that really need the attention of an armorer, at least, right out of the cardboard box.

The MERC415 has much of that work already done.  It is more than an entry level gun, if only because of the attention paid to its construction.  And maybe that’s the one drawback to the MERC415.  If you want a truly basic M4 copy, or if you don’t cotton to the Magpul extras, than this gun will seem overdressed.

And for those who do like the Magpul look, MERC has some pretty fierce competition.  Smith & Wesson’s M&P 15 MOE Mid Magpul Spec Series looks a lot like the MERC415.  And we liked it a lot, too.

But sometimes you have to trust the unknown.  Maybe that’s why Enfield went with the very distinctive Magpul motif.  One look at the gun and it is immediately recognizable both an AR, and a working billboard for Magpul.  But it is what you see on your second look that will begin to endear you to the rifle.  The finish on the gun is clean.  The fit of the lower and upper is tight.  The trigger breaks clean. 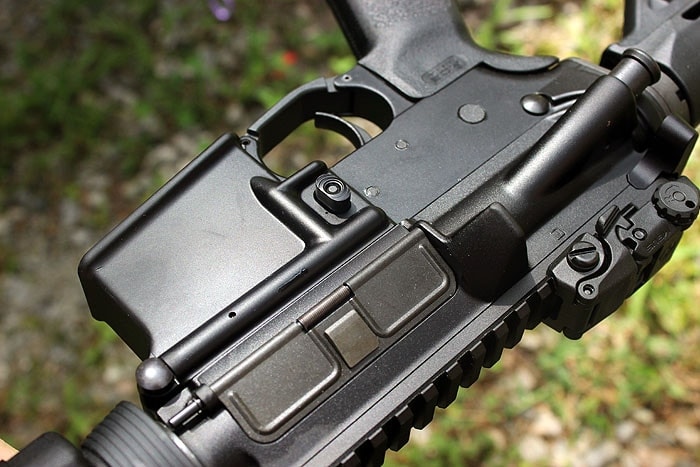 After the first afternoon at the range, I have no doubts about the MERC415.  We’ll put it through some more strenuous tests, though, just to make sure.  The MSRP on the MERC415 is $1,295.  That is higher than most entry level options.  But even though the MERC415 is Enfield’s entry into the market, it hardly feels like an entry level rifle.