We’ve given spilled a lot of virtual ink waxing poetic about DoubleTap.  We loved this gun from the start.  And at last, close to a year after I first held one at the SHOT Show, we have one in for review.  It has been a long wait.  After all of the hype, I almost expected it to be anticlimactic.  But then I pulled the trigger.

Everything you may have read about the brutal recoil from the DoubleTap is true.  It hurts.  I put 50 rounds of .45 ACP through this gun and I’m in pain.  The web of muscle between my thumb and pointer finger on my right hand is sore.  The metacarpal in my thumb feels bruised.  I’m not going to try to sugar coat it.  The pain is sharp and intense.  If you’ve shot a .44 magnum (especially one with wooden grips) you understand recoil.  The DoubleTap is more painful. 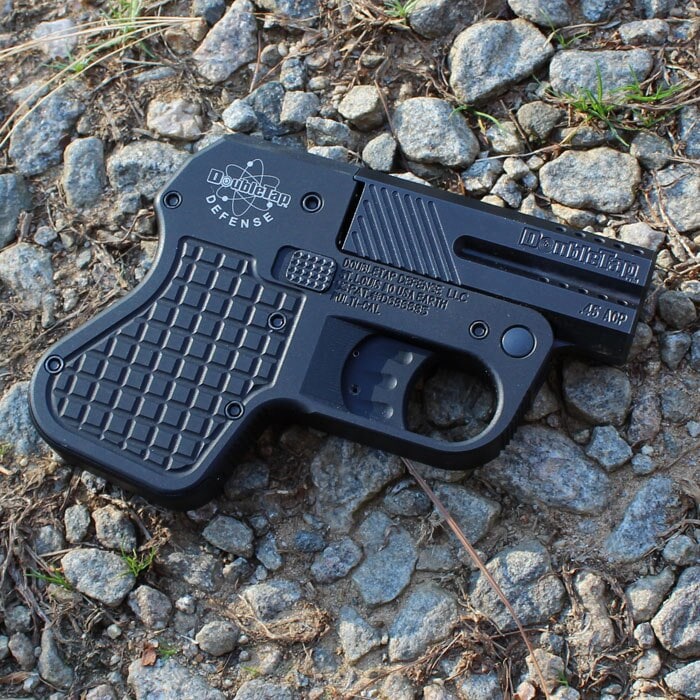 The DoubleTap in .45 ACP. (Photo by David Higginbotham)

But that’s not the point.  I’m opening with the way the DoubleTap kicks because that’s one of the first things you’ll notice (after the obvious, which is the gun’s small size).  But the DoubleTap is a defensive handgun.  It is meant to be used in dire situations.  The pain you may feel in your hand might be the pain that saves your life.  It is a reasonable price to pay.  And the pain you feel is nothing compared to the pain of the lead it delivers.

The Double comes in either .45 ACP or 9mm.  If you buy one, the barrel for the other is easily switched in or out.  They are currently working on other calibers.

The frames are made of either aluminum or titanium.  The titanium framed DoubleTap weighs in at 15 ounces.  The aluminum is a scant 2 ounces less.  The entire gun is only .665 inches wide.

The 5 1/2 inch length is about what you’d expect from a pocket pistol and the length of the grip makes it 3.9 inches tall.  The barrels are 3-inches long and milled from stainless steel.  It has no external safety besides the very heavy trigger pull (close to, if not over 15 pounds). 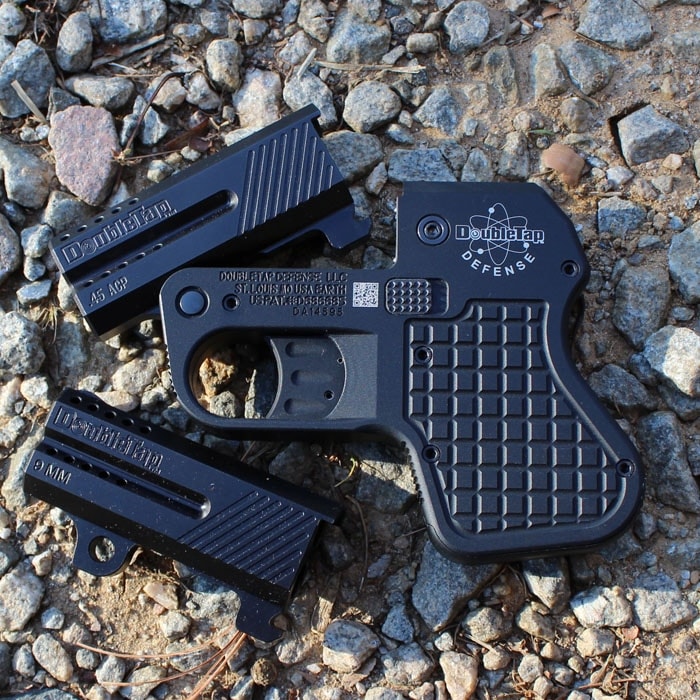 In all, it is very thin.  The size is about what you would expect from a pocket .380, but the round is so much more powerful that it would be hard to compare.  The .45 ACP will lose a significant amount of velocity from the 3-inch ported barrel, but it will still be effective. 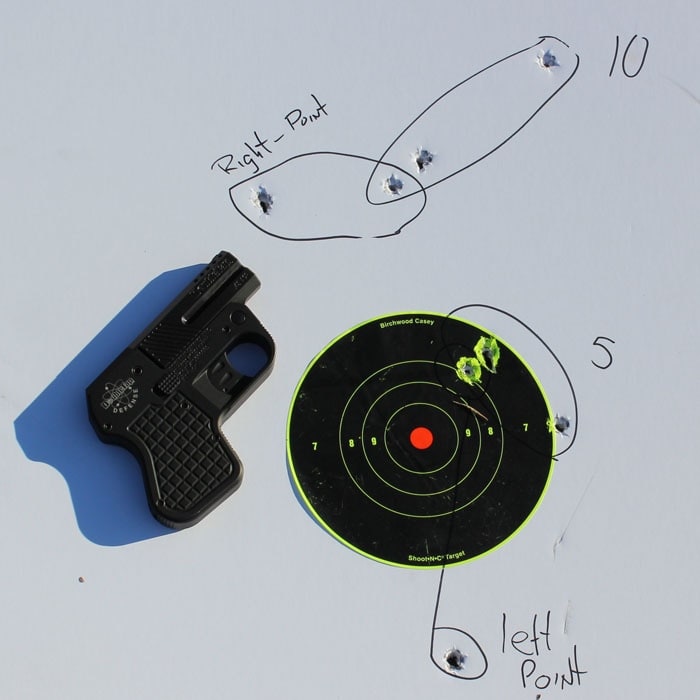 Aimed shots and point shooting from 5 and 10 feet. (Photo by David Higginbotham)

This is the epitome of the get-off-me-gun.  It has no practical range other than point-blank shooting.  I want to be clear about this.  The DoubleTap may not have any inherent flaw that prevents it from shooting straight.  Yet there is something in the interaction of the shooter and the gun that inhibits accuracy.  It does no good to clamp the DoubleTap down and test-fire it unless you plan to carry it in a vise.  The gun is just one element of a much more complicated equation.

I started at 21 feet, which is my standard distance for judging the effective accuracy of any short barreled pistol.  From that distance, I was unable to hit a 12-inch plate.  One handed, two handed — same results.  From 15 feet, I was able to connect with an 12 x 16 inch plate.  That is about the size of my torso. 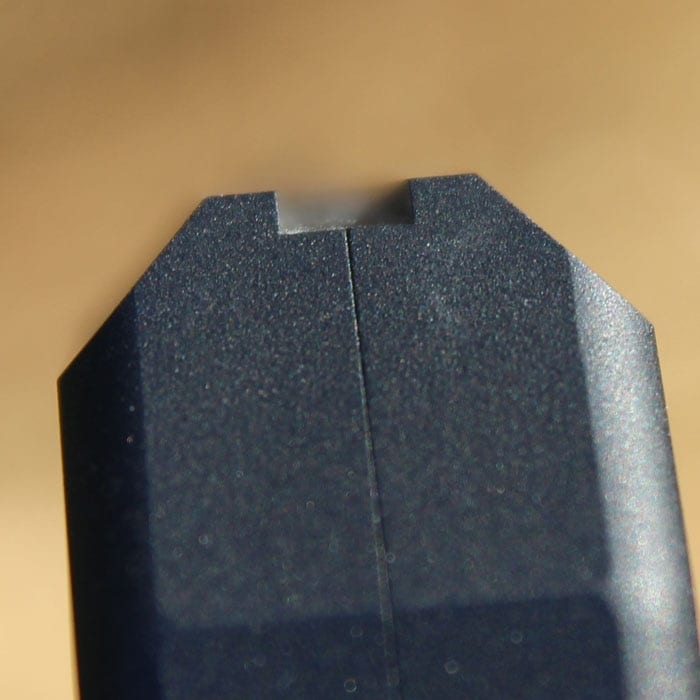 The rear sight is typical of pocket pistols. (Photo by David Higginbotham)

From closer in still, at 10 feet, I was able to get more consistent results.  I wasn’t going to shoot steel from that distance, so I moved to this crude foam board you see here.  I put the target in the middle to establish a point of aim.  At 10 feet, the shots were still not as predictable as I’d like.  At 5 feet, I was doing better.  Looking back at video of my shoot, I can see that I’m pulling right.

In the end, I tried point shooting from very close range.  I do this frequently with concealed carry guns.  It is a useful skill to develop and a must for close work with the DoubleTap, which you might actually fire from inside a pocket.  Point shooting, both right and left handed, provided results that were comparable to my best aimed shots. 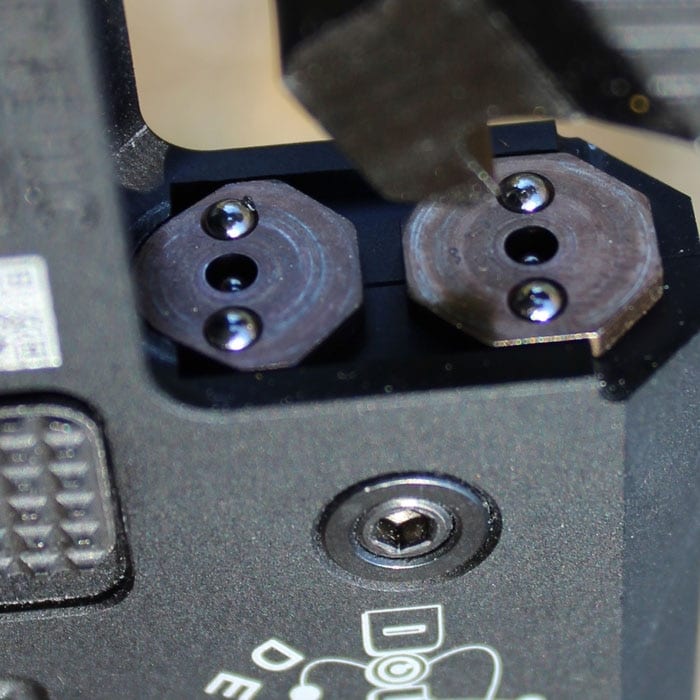 Why the sloppy shooting?

I have my theories.  The facts are easy enough to establish.  The barrels on these are very short.  That has a significant influence on accuracy, but we anticipated that going in.  The trigger pull is heavy and long.  It can be staged well enough, but holding it back still creates a bit of shake if you’re not rock solid (which is why I shifted to point shooting, with no staged shots).  It works either way with just about the same results (at least when I was shooting).

The biggest impediment to accuracy, in my opinion, isn’t the barrel or the trigger.  It is fear.  Shooting the DoubleTap isn’t pleasant.  I think I’ve hammered that home enough.  I spend a lot of time behind the trigger, but the anticipation of the stabbing pain can still psyche me out.  After six shots, my hand was fatigued.  But the sloppy shot placement was all me — a direct result of my knowledge of what was to come. 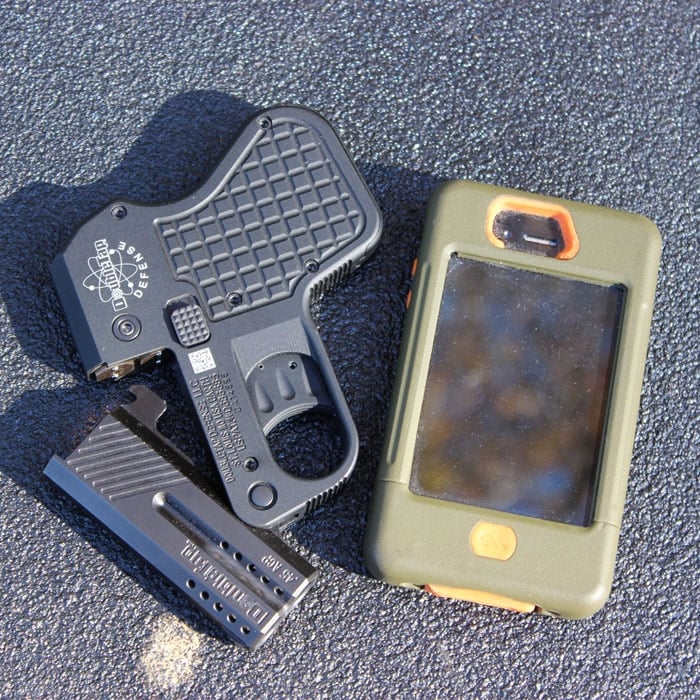 Not much larger than a phone. (Photo by David Higginbotham)

So let’s go back to the philosophy of the DoubleTap.  My initial test results suggest that you’re not going to enjoy shooting this at the range.  Yet, in a defensive situation, you won’t notice any of what I’ve just mentioned.  You have to practice with the guns you carry and that’s going to be ugly with the DoubleTap, but if you take it with you to the range when you shoot other guns, and then rock off a few rounds at the very end, you should be able to master this pistol quickly enough.

And DoubleTap has a rubber grip in the works that should make practice a lot easier on the hands.  A padded grip will let you build basic muscle memory during practice, and get a handle on accuracy, but you can still carry the gun without it. 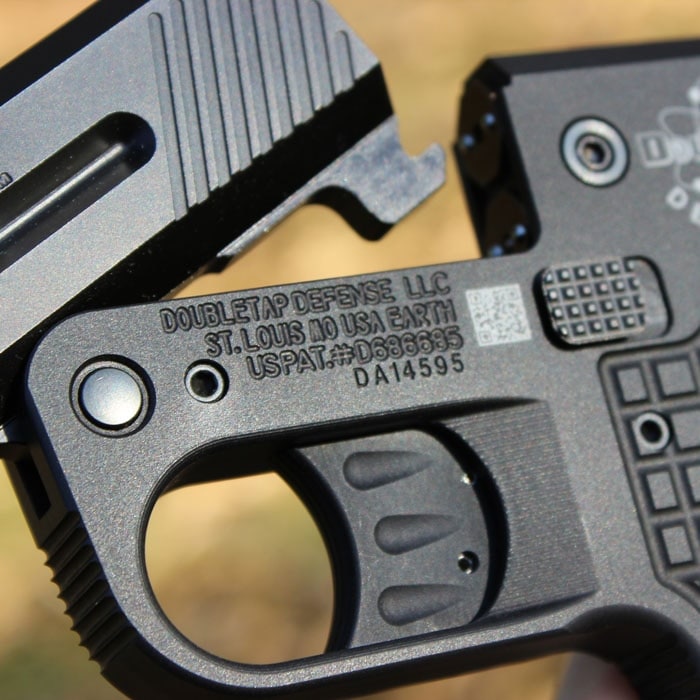 The 1911 style trigger pulls straight back. (Photo by David Higginbotham)

Part of the reason the gun hurts is becasue it is thin.  The energy drives right back into your thumb.  Gripping the DoubleTap with two hands will help steady it during the long trigger pull, but it poses a different dilemma.  The DoubleTap is small.  My grip has been shifting farther forward lately.  I hold farther out on the frame of most pistols.  If I’m not careful, my support hand comes in over the trigger guard and my thumb rests over the ports on the bottom barrel.

Keep your support hand back.  When the DoubleTap fires, the ports work very effectively.  You don’t want to have your thumb over the bottom ports when you fire. 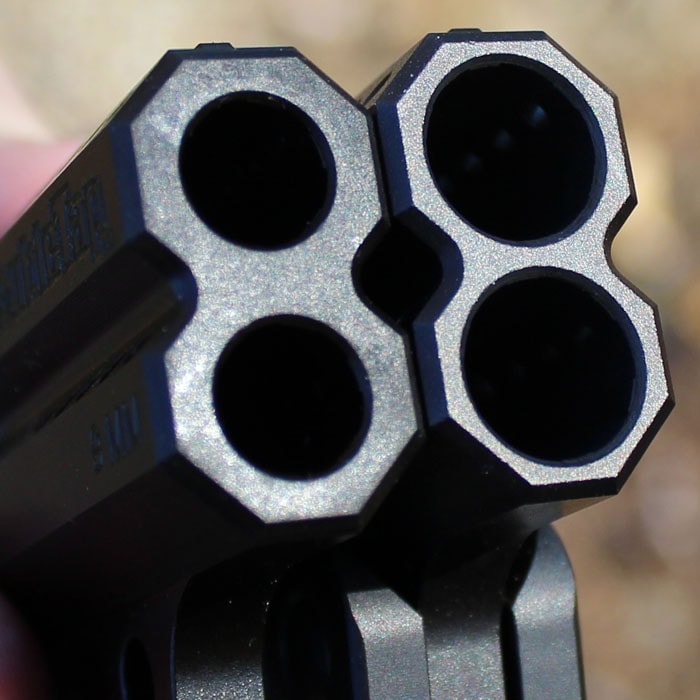 The double barrels, side by side. (Photo by David Higginbotham)

Though many reviewers have characterized the recoil as a problem, I don’t.  It is a byproduct of the size and power, which are the only reasons we want a gun like the DoubleTap.  It kicks — hard — and I wouldn’t want it any other way.

There was one serious issue that we had with our test gun.  I had one box of Blazer .45 ACP left over from a project, whic ran flawlessly in the DoubleTap.  The Hornady 185 grain XTP I bought specifically for the DoubleTap wouldn’t fire.  The light primer strikes were not sufficient to fire the round.

A quick search on the various forums shows I’m not alone with this one.  Some report that a quick pull of the trigger will fire rounds, while a lighter staged pull will not.  For me, it was all the ammo.  And I fired some reloads, some Winchester, Blazer and other Hornady, but the 185 grain XTP wouldn’t go. 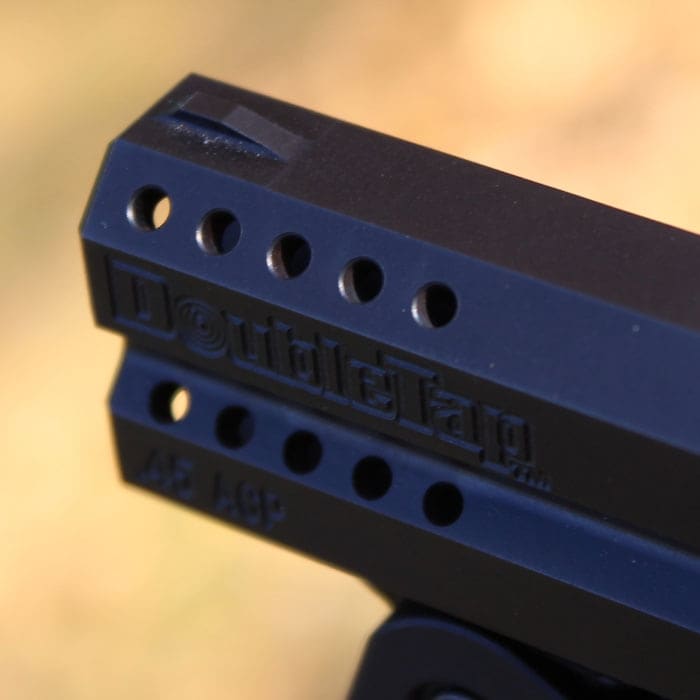 DoubleTap recommends dry firing the pistol 200 times.  This is solid advice, if only to get used to the heavy pull.  But it should also smooth out anything that might be slowing down the firing pin.

I’m not one to advocate carrying a gun that doesn’t work reliably.  I think that is ludicrous.  But if the problem is as simple to fix as 200 dry fires, I’m willing to try.  I haven’t had the chance to shoot again since I read about the potential fix.  When I do, I will update this.

Whatever you do, don’t carry it without the confidence that it will work.  If the gun has an issue that dry firing won’t solve, send it back.  DoubleTap Defense offers a lifetime warranty on their products.

The way this thing bites your hand may keep you from practicing with it.  You can’t let it.  Though it is tempting.  Why practice?  Why not shoot a few rounds through and then just keep it on hand for true emergencies?  Because that is negligent. 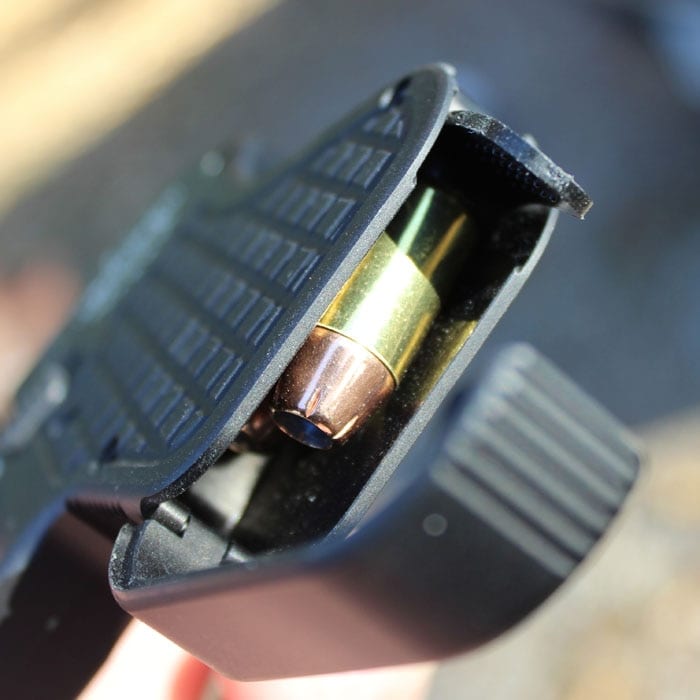 Two in the handle. (Photo by David Higginbotham)

I’m 6’4″ and weigh about 240 pounds.  I’m not as fit as I could be, but I play a lot of racquetball and work with my hands.  I’ve got a solid grip.  I may end up carrying the DoubleTap, but not until I get over that fear flinch response to the recoil.  I need to master it, instead of it mastering me, which is certainly the case.

But I’m a sucker for punishment.  And I’m going to learn how to shoot this thing.  My overall assessment of it at this very early stage is entirely positive.  It has some peculiarities and is going to take some getting used to, but I’m going to stick with it.  I’ve yet to see another large caliber handgun that is as easily concealed.  That, above all else, is the promise of the DoubleTap, and makes it worth working with.