FN Herstal stepped way out of the civilian handgun production box when brought to market the 5.7x28mm, which it calls the Five-seveN™ MK2, though most people refer to as the “five-seven.”  This relatively new cartridge, with a history of less than 30 years, in combination with the FN pistol, is a promising combination for people looking for greater versatility from a handgun. 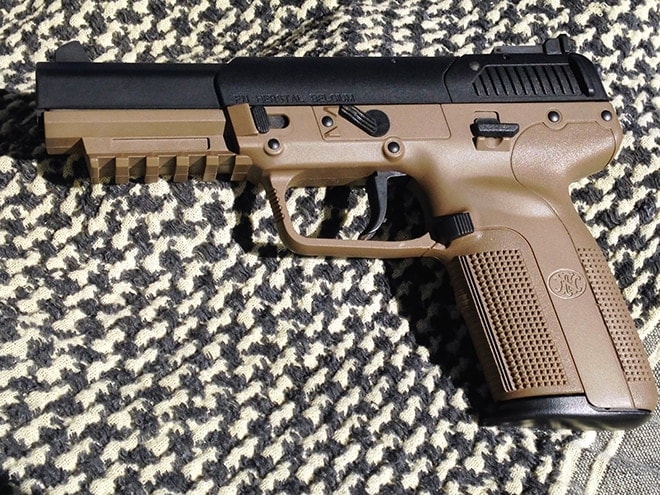 Upon picking up this large, 8.2-inch long pistol, I was struck by its lightness.  Unloaded, the weight is a mere 1.74 pounds.  The slide racked with ease and relatively little pressure.  The copy I tried included only California-regulated ten-round magazines.  From the top view, loaded, the Five-seveN bears a resemblance to a downsized AR-15 magazine.  Standard factory magazines are 20 rounds.  An aftermarket brand offers 30-round capacity. 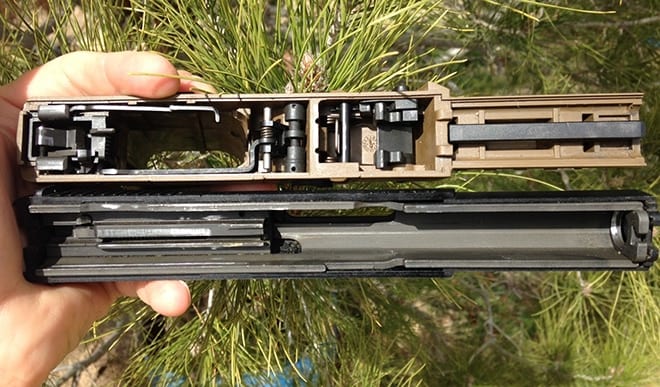 A steel slide is shrouded in polymer. (Photo: Team HB)

The lightness of this gun is owed to polymer construction wherever possible.  At first it appears even the slide is polymer.  It’s actually steel, with a polymer cap.  The grip is slim in the hand, but wide front-to-back to accommodate those 28mm rounds. There’s a roomy trigger guard with a trigger that’s plenty long for large or gloved hands.  The lower part of the grip, in touch with the middle through pinky fingers, is lightly pebbled, but the part in contact with the web of hand and thumbs is smooth.  This reviewer, with medium-size hands, finds the grip very comfortable, but it would probably be on the slippery side in wet or sunscreen-soaked conditions.  Folks who prefer high-traction grips would probably want to add enhancements here. 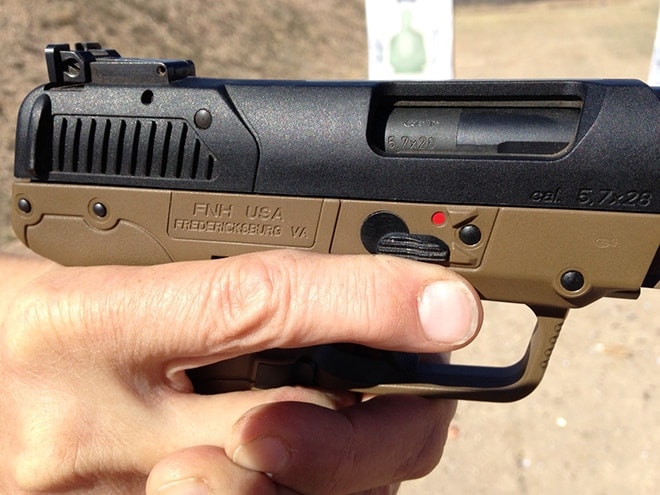 The 4.8-inch barrel has ample length of rail underneath to attach most pistol lights. The flat dark earth frame/black slide color combination on the borrowed test copy is attractive.  The gun is shown on FN’s website in black. There’s nothing radical and nothing antiquated about the appearance of the Five-seveN, which should make it appealing to the eyes of most handgun lovers. 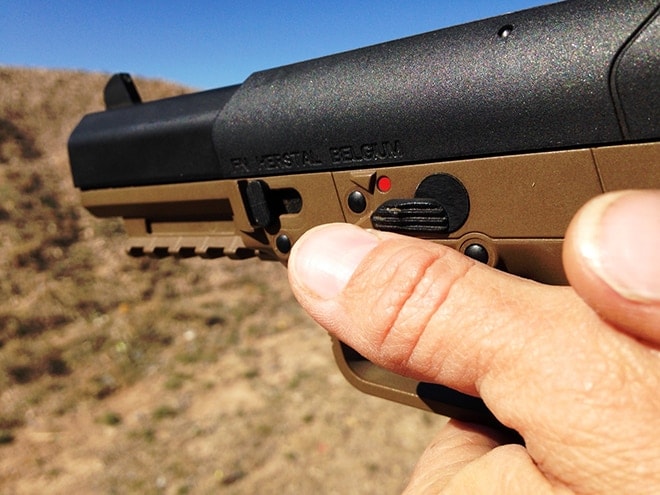 Ambidextrous features are built-in, at least in two ways.  The magazine release is reversible.  There’s a rather unusual, always-ambi, black safety lever located on each side of the frame, just above the trigger guard.  It’s easy to operate with either the trigger finger or with the thumb of the firing hand, rotating a quarter-turn up for safety, down for firing.  It’s a feature that is both reassuring and potentially confusing.  The operator of this safety, placed in a non-standard position, should pick one way of operating it and stick with it for dependable operation under stress.  To this reviewer’s mind, the thumb is the sensible choice here, as the trigger finger should have only one job when it’s not at “home base” against the frame. 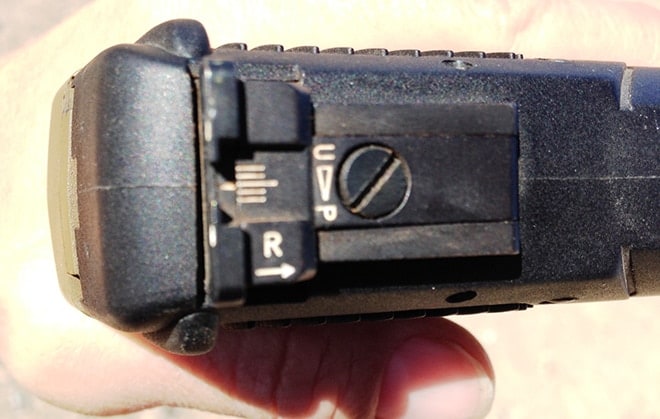 The non-ambi friendly and unchangeable feature is the position of the ejection port.  It’s not completely open on the top of the slide. Only the 90 degrees from the twelve-o’clock position to the three-o’clock position, as seen from the shooter’s perspective, are open when the slide is rearward. This could make unloading and clearing of problem cartridges a challenge for left-handed shooters, especially those who are new to handgun shooting. 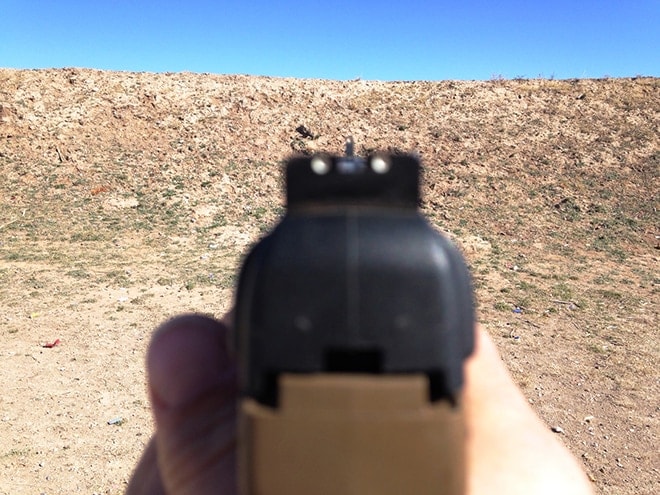 The dependability of the gun in terms of overall function was excellent.  Through 100 rounds of American Eagle 40 grain FMJ, not one malfunction of any sort occurred.  The trigger has a light pull and, in this reviewer’s estimation, an appropriate amount of travel on the initial pull for a self-defense or hunting weapon.  That is to say, it’s a typical length of pull for most of the full-size semi-autos made by major manufacturers.  Reset is about half that length of travel, clear, and crisp.  In all, the trigger was a pleasure to operate.

The three-dot sight system is easy to use.  The rear sight blade is adjustable for windage and elevation, and hash marks are provided. The front sight post is rather tall and skinny, which proved useful when shooting at longer distances. 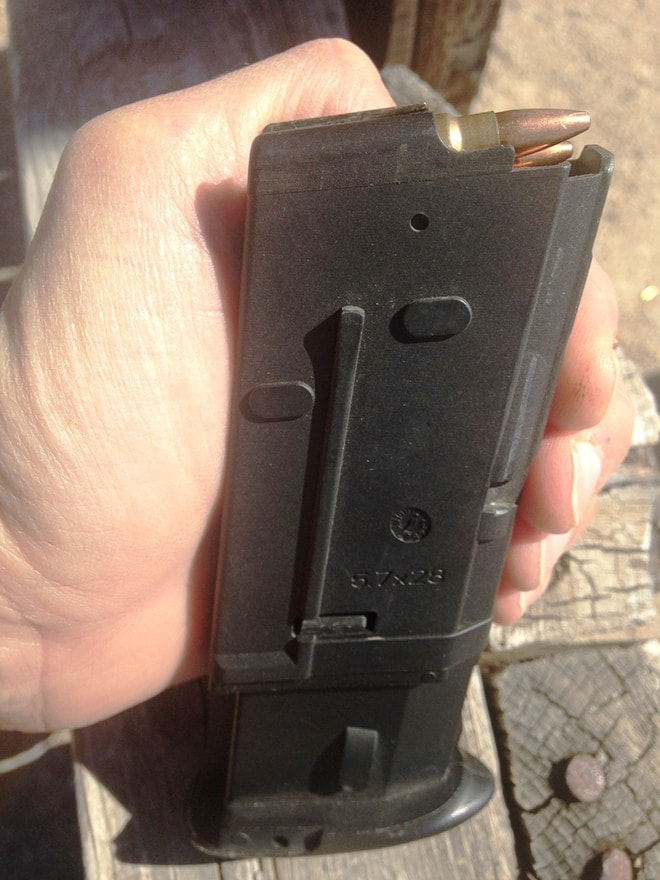 The rifle-like cartridge produces incredibly fast action.  Observing the gun in action, the motion of the slide is lightning fast—the average handgun slide cycle looks slow in comparison.  The American Eagle rounds used in this test have a reported muzzle velocity of 2,250 feet per second.  The heavy recoil one might expect from the lightweight frame and high velocity round are tempered by the small bullet—recoil is nearly imperceptible.

Accuracy left our review team of experienced pistol shooters looking for more—at first.  At 10 yards, five-shot groups were scattered in a long string for each tester, in sloppy patterns two-and-a-half to three inches long, with no two rounds touching.  Having experienced that, it was easy to conclude that the 5.7x28mm round was meant for applications farther downrange.

Conveniently, our local range has a sizable steel silhouette target at approximately 150 yards.  Taking aim with sights aligned at the top edge of the 30-inch tall steel, it was suddenly almost difficult to miss. Even imperfect trigger presses and slight misalignments of the sights seemed not to matter much. Each shooter was rewarded repeatedly with the satisfying audible thud of rounds on steel.  It was possible to speed up to some extent and still be accurate.  Hitting that target represents an exercise in concentration with most handguns.  With the Five-seveN™, it was easy.  What fun! 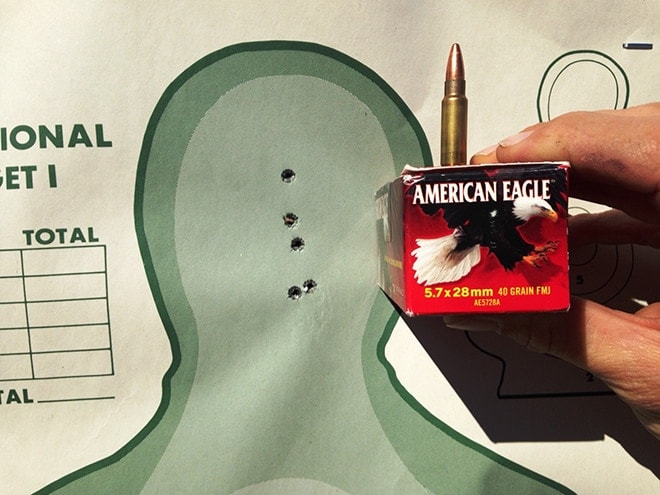 Takedown of the gun is fairly straightforward, and has been referred to as “Glock-like.”  That’s accurate in terms of the procedure required, though the takedown button on the FN moves rearward and must be held with substantial pressure while the slide is removed.  The recoil spring and barrel don’t separate for standard cleaning; the barrel is actually encased in the spring. After at least 120 rounds of practice (there was more firing before the test loan began, of at least 20 rounds), there was minimal fouling of the action and barrel.

There’s so much fun to be had shooting at distance with this gun, but most owners will have to limit their fun due to the cost of feeding it.  Current prices for 5.7×28 hover around 55 cents per round, before shipping or tax.

This easy-to-operate, dependable handgun would be perfect for anyone with hand strength issues for whom over-penetration and close-range precision aren’t important.  For the farmer/rancher, it offers carbine-like range for varmint control without the bulk. And it’s fabulous fun for target shooting at distance. Current online prices are around $1,275, give or take $100.  It’s a little more than most handguns, but then again it’s not like most handguns considering both caliber and long-range performance.