Polymer framed pistols.  The market is full of them.  They’re inexpensive to produce and easy to use.  Most are designed for defensive use, though some have genuine tactical potential.  Yet there are so many available.  How can you begin to tell them apart?

The fallback for most of us is hands-on-experience, but the company’s reputation is almost as influential (and more so for some).  There’s Ruger’s blue-collar constituency.  Smith & Wesson leveraged their revolvers’ reputations to earn their loyal M&P fans.  Springfield Armory’s XD line has a devoted following, but nothing to compare to the rabidity of Glock owners. 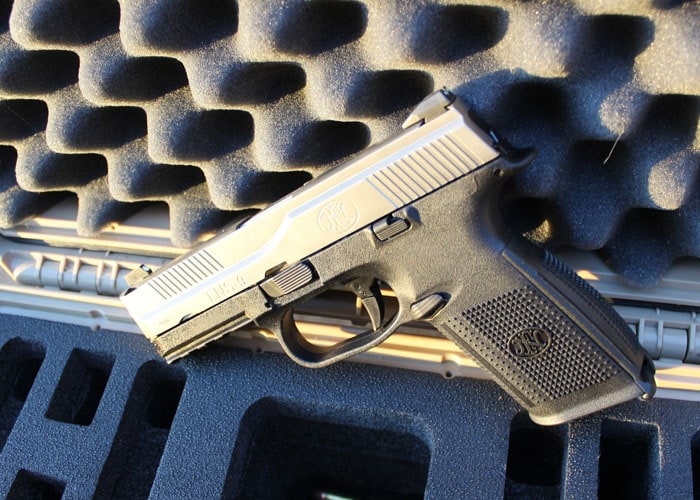 The FNS-9 is streamlined. (Photo by David Higginbotham)

How does FNH expect to cut into this crowded field?  It isn’t enough to release a gun that can compete.  It has to be something more.  The FN Five-seveN was a genuine innovation, but still hasn’t caught on.  FNH is making inroads with the FNX line.

The FNX .45 Tactical is in a league with very little competition.  The Beretta PX4 Special Duty and the Heckler & Koch USP Tactical come to mind.

But the FNX Tactical is expensive and beyond the reach of most of the civilian market.  But the FNS-line is there to pick up the slack.

The FNS-9 is a solid pistol.  It shares many of the design features of the FNX, but takes away most of the extras.  It is meant for street-beat service use.  The pistol is functional enough to appeal to those of us who really nerd out over guns, but simple enough to be used by true rookies with minimal training.  My interest in the gun stems from its potential for concealed carry. 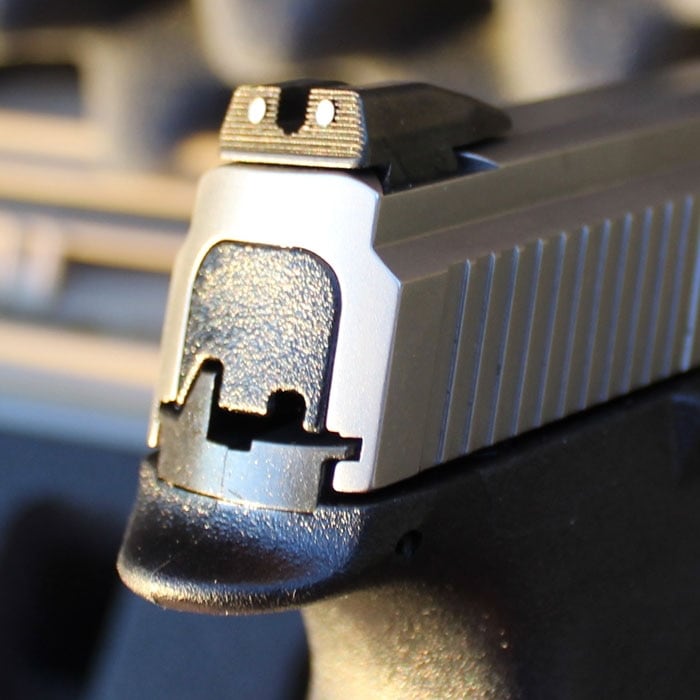 No external hammer to catch on clothes. (Photo by David Higginbotham)

The FNS-9 is a polymer framed striker-fired autoloader with a double-action trigger that breaks somewhere north of 5 1/2-pounds, the slide and barrel are built of stainless steel, and the gun has an external extractor, which doubles as an easy-to-read loaded chamber indicator.

The slide is cut with front and rear cocking serrations.  The gun is available with three dot sights, or night sights, which look exactly like the three dots but have tritium inserts.  The sights are tall enough to be functional, yet the corners have been knocked down so they won’t snag.

Inside, the gun has a polished chamber and feed ramp.  It will eat anything you feed it.  The barrel itself is 4-inches long.  The overall length comes in at 7 1/4-inches, and the gun is 5 1/2-inches high.  Not compact, by any estimations.

The FNS’s polymer frame has a replaceable steel frame and slide rails.  If anything were to wear unexpectedly in the frame, it is easy enough to service.  The frame also comes with two interchangeable back-straps.  Below the barrel, a small section of rail is ready for lights or lasers.  That rail section is a big plus, as it allows for the gun to a true multipurpose firearm. 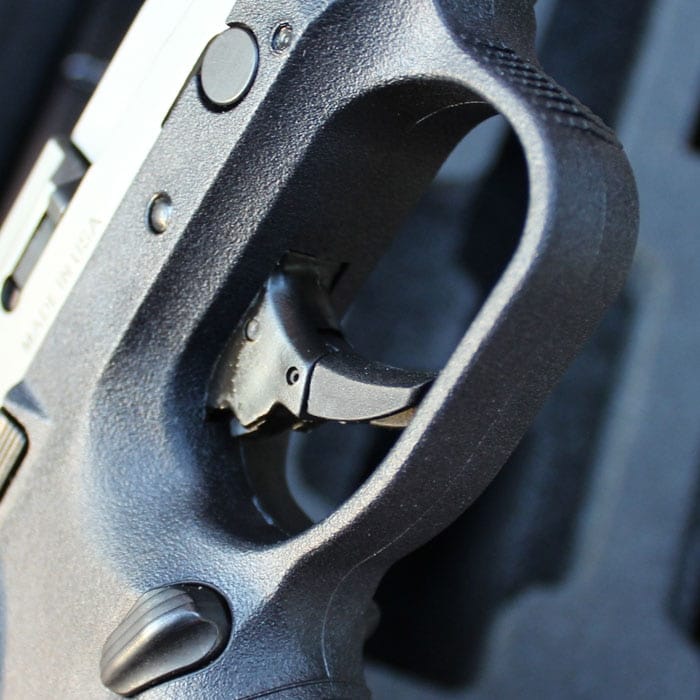 Mag release and slide release are on both sides. (Photo by David Higginbotham)

The controls of the gun are fully ambidextrous.  The slide release is in the exact same spot on both sides, as is the magazine release button.  The safeties on most are also accessed from either side.

Empty, the gun is a svelte 25.2 ounces.  A full 17-round magazine is going to add significantly to its weight, but it will still be lighter than most guns of similar size.  Carrying it won’t be as noticeable at the end of a long day as it could be.  While we’re talking about carrying, it is worth mentioning that the gun is wider than some of its competition.  The bottom of the grip flares out to more than an inch an a half.

This one arrived for testing with three 10-round magazines.  While the magazines work very well, they run dry fast.  The sad thing is that they look like normal magazines.  FNH ships the pistols with the aforementioned 17-round magazines.  But these are out there, too, for those of you who like an extra challenge. 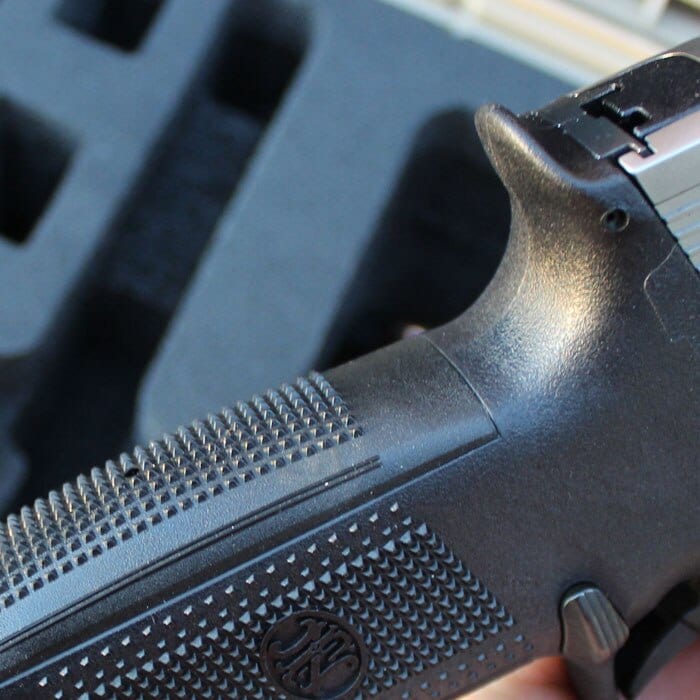 The back-straps are interchangeable. (Photo by David Higginbotham)

But there’s more.  This model doesn’t have an external safety.  Rumor in the forums is that this model is reserved for LEO sales only, but that’s not true.  These have been shipping for several months now and are available commercially.  If it were a model reserved for LEO, I would expect it to arrive with higher capacity magazines.

The frame is built on a variety of textures.  Striated ridges mesh with your fingers on the front of the grip.  More aggressive texture on the sides bites into the palm.  The back straps are sharp enough to grab even a gloved hand.

One advantage of the FNS-9’s trigger guard is that it is large enough to use while wearing gloves.  Some other pistols can get a bit snug.  Not the FNS-9.  The guard dips down over the middle finger, ever so slightly, but it provides extra room in the guard and helps establish a firm grip. 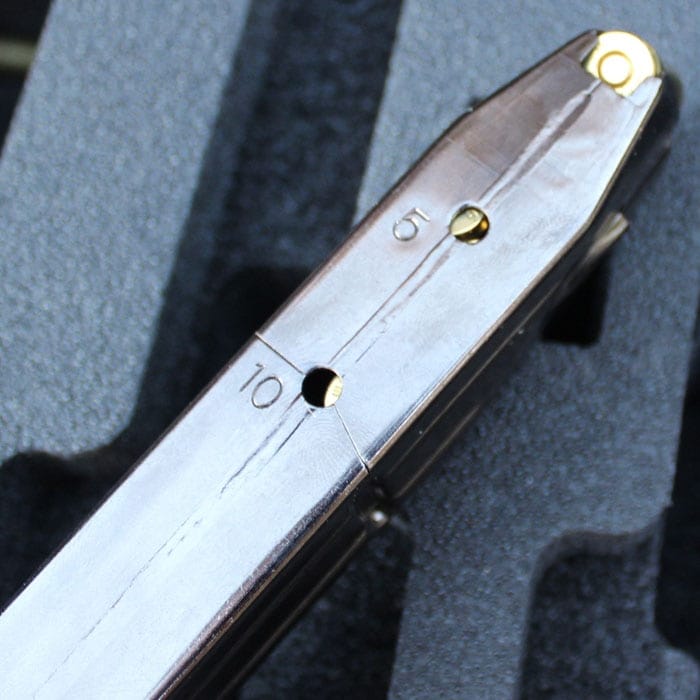 10 round mags? (Photo by David Higginbotham)

The barrel of the FNS-9 is low.  This is an important design feature, as the light weight of the gun make it prone to the effects of recoil.  It is jumpy.  The lowered barrel drives the slide directly back over the hand.  Where some pistols are prone to a distinct rotation at the fulcrum of your wrist from excessive muzzle flip, the FNS-9 is designed to push back more directly, rather than flip up.

And it works.  I find that recoil torques the gun to the left, slightly, and that the muzzle rises, albeit slightly.  A two-handed grip cancels out the muzzle-flip nicely.  That said, I watched three different shooters miss on their fast follow-ups.  The first shot would connect, but a second shot would miss just high.  You can see it in the video above.  We would all get comfortable with a modest to fast paced split time on the plates and bump it up a notch.  Only our shots went up, too.  The first would connect and the second would sail just high and left.  It is frustrating, but not uncommon.

Keep in mind, though, that this is more of a problem in competition shooting than it would be in a defensive situation.  High left on a steel plate is the right shoulder of a torso.  While that isn’t the optimal placement for a follow-up shot, it isn’t bad. 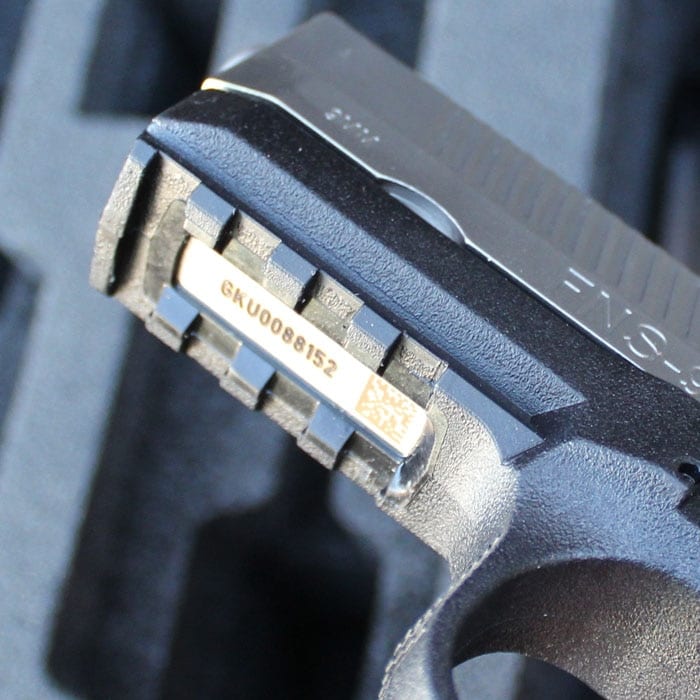 The rail is a nice addition. (Photo by David Higginbotham)

At the end of a couple of long range days, I don’t have any complaints about the way the FNS-9 shoots or handles.  The slide release is small and stiff.  There were times that I had to make two or three passes with my thumb to get it to fall.  After the first few misses, I began dropping the slide by pulling it back rather than with the slide release.

I have no complaints about the trigger, at all.  It has a built in safety mechanism that prevents the whole trigger from moving until the tip has been intentionally moved back.  The review gun we have in breaks clean and resets well.  It isn’t the most exceptional trigger I’ve seen, but more than sufficient.

We had no feeding or extraction issues.  I wish I could say that about every gun we review.

The FNS-9 should be building an audience.  It is a great pistol.  It works well, and can be used in the role of primary service weapon or for concealed carry.  It would be a great cold-weather carry gun, and a solid choice for anyone looking for one pistol to fill multiple roles. And the cost?  Under $700.  Not bad for an American made 9mm.