Those familiar with Glock know that the company’s designs bear a striking similarity to one another.  The Glocks are all angular steel and textured polymer.  They are striker fired pistols with streamlined external controls and few traditional safety features.

As such, it may be hard to tell the difference between some of them without reading the numbers carved into their slides.  But for true Glock aficionados, the nuanced distinctions become major defining characteristics.  But there’s no mistaking the Glock 20.

This gen four 10mm semiautomatic is a chunk.  And it has to be solid to accommodate the pressures of the 10mm load.  And if there was some mistake about which Glock you were holding, you’d know when you pulled the trigger.  The 10mm, even in a gun as hefty as the Glock 20, makes an impression.

The 10mm is, for many, the ideal handgun load.  I’m going to put myself in this group.  It comes down to what is manageable.  I still prefer the .357 to the .44 magnum for self defense revolvers, precisely because I can hold down the muzzle flip of the .357 and I’m not apt to flinch when anticipating recoil, as I am when I shoot .44 magnums. 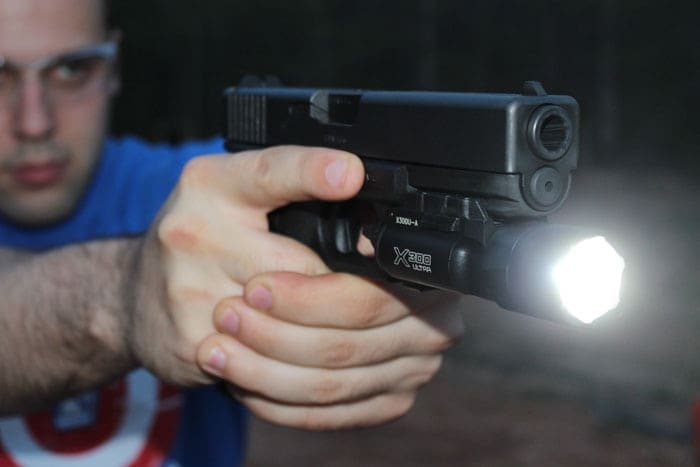 But some feel like it is overkill.  Jacob, who you see in the video, can hit with the Glock.  Repeatedly.  Accurately.  But he’s a Glock 19 guy, and is much more effective with the Glock 19 in 9mm.  He has more control of the 19, which equates to more confidence.

The Glock 20 is a heavy hitter.  No questions.  It kicks like a mule, and does so unapologetically.  You don’t get the 10mm’s ballistic performance without some intense recoil.  But if your first shot connects, you probably won’t need another.

The barrel is  just over four and a half inches long, which allows for about four inches of rifling.  The magazine holds 15 rounds.  Empty, the 20 weighs in at 27.69 ounces.  A full magazine will add significantly, and will vary slightly depending on the grain weight of the bullets.  But expect something close to 40 ounces. 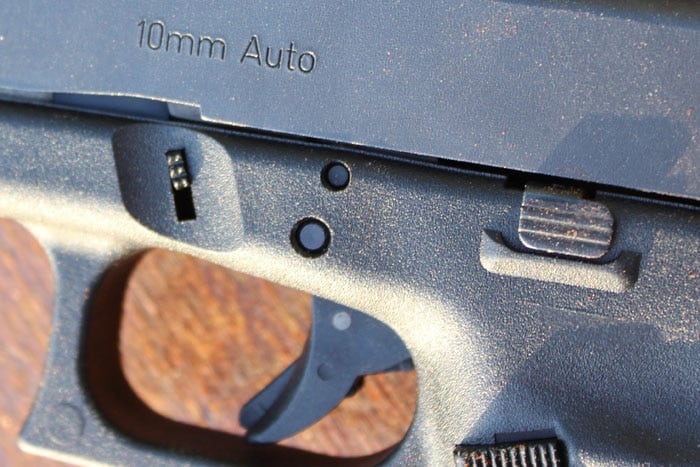 That weight, when combined with the Glock’s action, eats up some of the recoil. It kicks.  But the grip is large enough to hold onto.  The off hand can rest on the shooting hand, or in front of the trigger guard for extra leverage.

The sights are typical to Glock.  The rear is a white rectangle.  The front is a simple white dot.  They’re adjustable, replaceable, but highly accurate and easy to use out of the box.

The trigger may be the biggest selling point for me.  While I’m still not a fan of trigger safeties, I’m coming around.  I’ve been working hard on placing only the pad of my finger on the trigger.  I developed a bad habit early of putting way too much finger on the trigger, but the trigger safety is a great reference point.  When the tip of my finger hit the safety lever, I’m where I need to be.  And the five and a half pound pull is surprisingly crisp.

Odds are, this one won’t find its way into active duty, or many law enforcement applications.  It is simply too big for smaller shooters.  Glock suggests it would be good for hunting.  True enough.  This would be a great gun for back-up on a hog hunt.  It would even be useful for ranchers, or others who may have the random task of euthanizing large mammals. 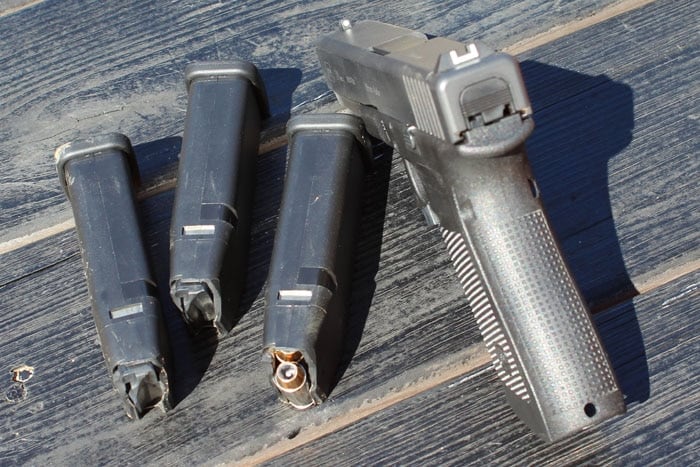 I’m sticking with self defense.  Though it isn’t a serious candidate for subtle concealed carry, it can be covered up easily enough.  In winter maybe.

It would make an incredible truck gun.  I think this is something that some folks often overlook.  Once, in what seems like a former life, I lived out in the high desert of New Mexico.  I was driving late one night, miles and miles from anywhere, and I came across a small hatchback that had driven way off the road into a fallow field.  I stopped to help and the drunk woman in the car explained that she’d hit an elk.  I walked back down the road, maybe two hundred yards or so, and found the animal.  The bull elk was partially paralyzed, unable to stand, but still very much alive.

A hatchback going 70 miles an hour wasn’t enough to finish the hapless animal.  That’s why you need a truck gun.

Anything wrong with the Glock 20?

There’s nothing wrong with the 20 that isn’t an issue with all Glocks, really.  I’ve never been a fan of the open space between the slide and the frame.  I’ve always felt like this space let’s too much dirt and grime into the gun.  Though the opposite can be said, too.  It is just as easy for dirt and grime to escape. 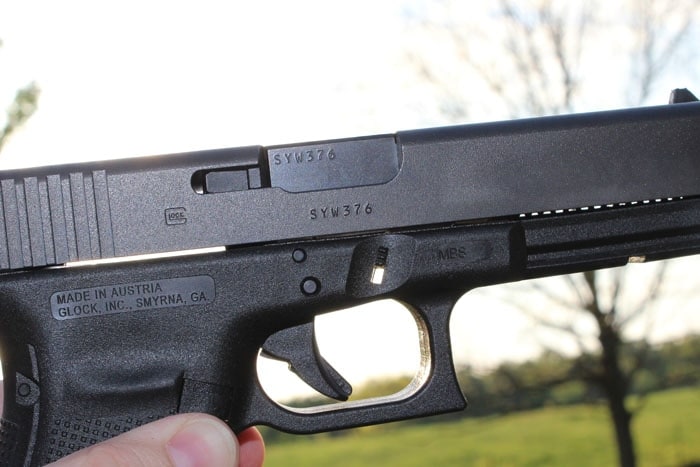 There are no manual safties, aside from the trigger safety.  Some see this as a detriment.  No external hammer.  Steep grip angle.  But these are the defining features of the Glock.  And if you are a fan, it is because these things work for you.  Glock owners aren’t averse to carrying a ready-to-rock striker fired pistol.

The only true pitfall is that there’s no decocker.  If you want to make the gun safe, you have to drop the magazine, rock out the round in the chamber, and pull the trigger on an empty chamber.  There are some who feel like this isn’t safe.  I don’t think it is safe, or unsafe either.  But it requires thought.  And that’s more than some can muster.

I didn’t expect to like the Glock 20, and I can’t get enough of it. We have a nice holster in for it, a Safariland ALS.  And we’ve been using a SureFire X300 light with it, too.  So I’ve had more trigger time than I usually get for a review gun.

Jacob, on the other hand, really wanted to like it.  But after shooting a hundred rounds or so at one video shoot, Jacob had had enough.  His wrist wasn’t standing up to the abuse. 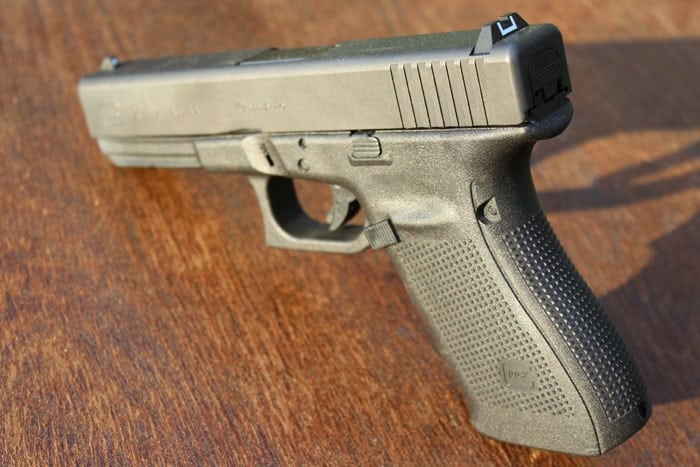 And that’s something to consider.  The Glock 20 isn’t a plinker.  10mm is not easy to find, and not cheap when you find it.  You’ll need to practice with the Glock 20 in order to get proficient, and that practice will take a physical toll on your hands.