Among choices for concealed carry pistols, the Glock 43 has been one of the most popular since its 2015 release. It was adopted more or less happily by Glock fans who nevertheless bemoaned its anemic six-plus-one capacity. It even earned a satirical Hitler video  for its shortcomings.

The Glock 43 was adopted by throngs of folks who felt it was the best among lots of unsatisfactory choices. Certainly, aftermarket options made it better. Night sights, light attachments, and magazine extensions helped. Lots of us, myself included, carry a G43. 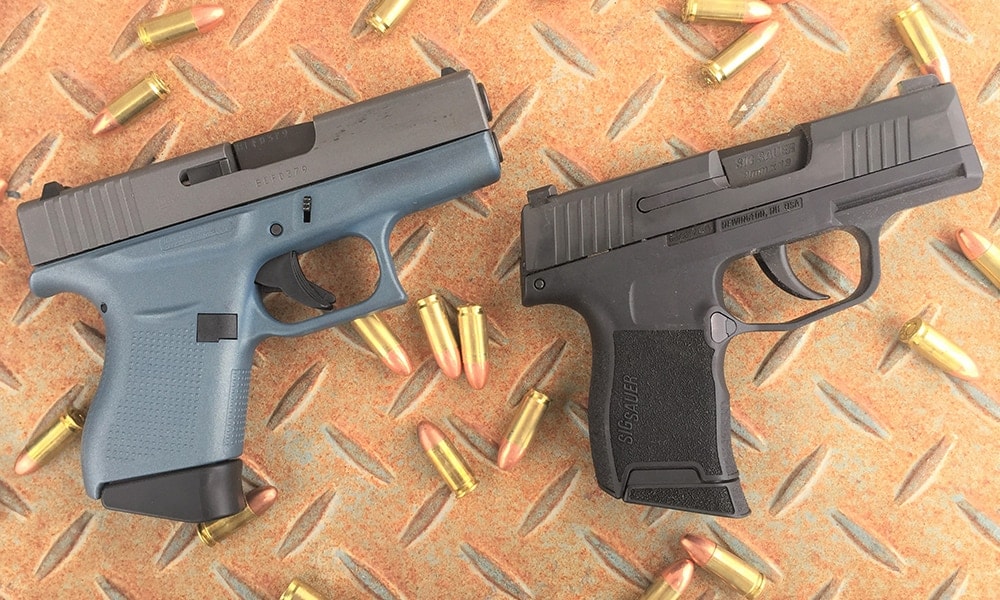 Birds of a feather! Both reliable and concealment-friendly. (Photo: Eve Flanigan/Guns.com)

Three years later, SHOT Show 2018 saw the unveiling of the Sig Sauer P365. Online chatter was instantaneous. This new pistol was a strange beast, with a profile strikingly similar to that of the G43, but with a major difference: it was to be sold with two ten-round magazines, one with a flat floorplate and one with a pinky rest, just like the G43. But it seemed there was sorcery involved—how could a magazine not much bigger than the G43’s hold ten whole rounds?

These two firearms have a few things in common, other than size and weight. Trigger weight and travel are similar, with the break on the P365 being less clunky than that of the Glock. Both have roomy trigger guards. Both easily drop magazines without a tug, assuming the release is performed without the meat of the hand running interference with gravity at the bottom of the mag well.

Choosing between these models isn’t a discussion I’d even muster if both models weren’t dependable. They are. I’ve run multiple brands and grain weights through both guns. They just run. To me this is the one critical factor in choosing a concealment gun—it must go bang when it’s time. 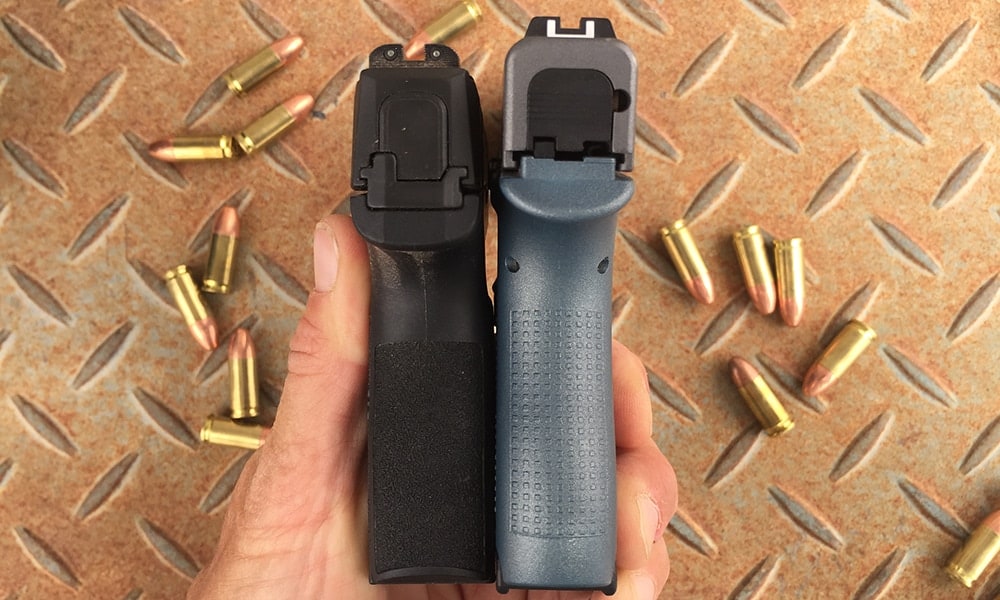 Viewed from the rear, the 43 appears slightly taller here, but the Sig’s official height is a tiny 0.05 inches greater. (Photo: Eve Flanigan/Guns.com)

The P365 sports forward cocking serrations, a rail, and night sights; the G43 doesn’t. The G43 has a reversible magazine release; the Sig doesn’t, though it’s worth noting that functional issues have been reported by many owners who’ve switched their G43’s to lefty configuration. Obsessed with finger/thumb grooves? The G43 has them.

Having carried and used the P365 for a little more than a month now, in the same holster that used to carry a G43, observations by myself and other shooters have come up with theories about the little gun’s remarkable capacity. One colleague who fired the Sig and is a self-described grip squeezer said the grip’s walls are so thin he feels them flex while using it. I’ve noticed the seeming miniaturization of parts that interface with the magazine. The series of ledges that secure the mag inside the well and comprise the follower/slide lock/side interface are very slim. That means more room for a mag. It’s a long-overdue overhaul of concealment pistol design. However, the G43 remains a contender thanks to a trait of the P365 that’s sure to turn some folks off.

The comparative price of these guns can be considered the difference between the upgrade to tritium night sights on the Glock versus inclusion of that asset from the get-go on the Sig. 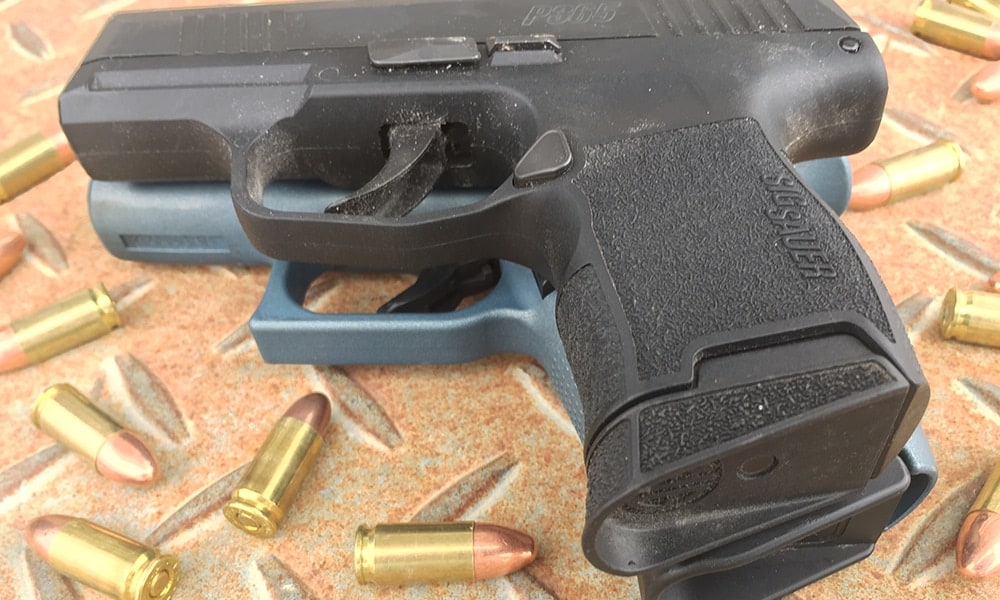 With each wearing an extended magazine floorplate, the little guns are nearly identical in size. (Photo: Eve Flanigan/Guns.com)

Here’s the sticking point: the P365, on most occasions when a human digit is in the vicinity of the slide lock lever during the firing sequence, does not go to lockback when the mag is empty. For a concealment gun that holds 11 rounds, that’s shipped with an extra mag that holds another 10, I can put up with what amounts to an AK-style reload when the firing sequence is sufficiently intense to make a body forget to count.

The Glock 43 in this feature is not entirely stock. It has a custom Cerakote job and a Pearce magazine extension, increasing mag capacity to seven.