“Who says diamond’s are a girl’s best friends?”  That’s the catchphrase of Henry’s American Beauty tribute lever rimfire rifle.   The combination of beauty and strength will carry this rifle through many generations.  Named after the iconic American Beauty rose, I’m enthused to review a rifle intended mainly for women that is neither pink nor of lighter, lesser quality than its counterparts. 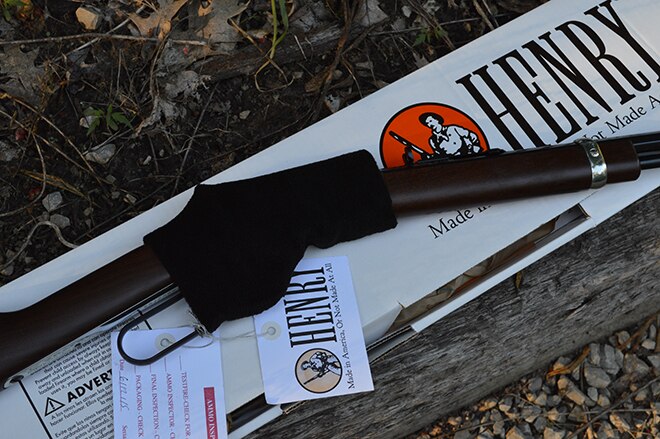 All Henrys come with a fleece receiver stock for extra protection. With such fine engraving this is very welcome. (Photo: Kristin Alberts)

The American Beauty is a .22 caliber lever action rifle capable of firing .22 shorts, longs, and long rifle ammunition. Its tube magazine holds 15 rounds of LR, 18 of Longs, or 20 Shorts.  Stocks are fancy American Walnut with above average grain patterns.  The Marbles iron sights include a fully adjustable semi-buckhorn rear, with reversible white diamond insert and brass beaded front sight.   With an overall length of 38.5” and an octagon barrel measuring in at 20,” the rifle weighs in at a hefty-feeling 6.85 pounds and balances very well. 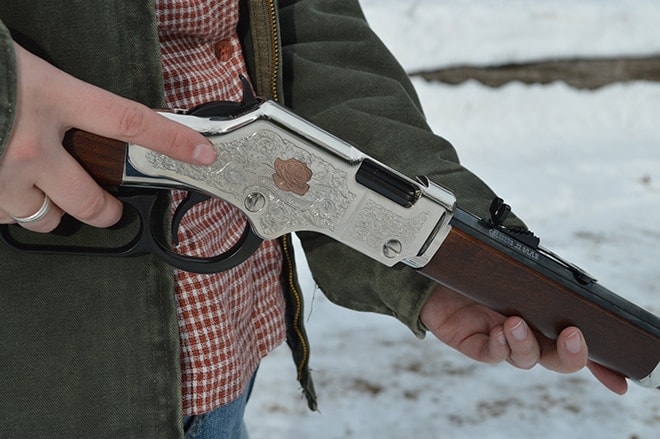 While Henry makes an almost ridiculous number of tribute and special edition rifles—from American Farmers to Firefighters, Boy Scouts to Freemasons—many with both stock and receiver embellishments, the American Beauty jumps out from the rest.  The Beauty’s receiver showcases an American Beauty Rose embellished with intricate floral scroll patterns. Beneath the rose is a banner reading “American Beauty” all hand-cut by master engraver Heidi Roos.  The rose is mechanically transferred onto the nickel plated receiver, and then plated with 14K gold.

Like all Henry rifles, the American Beauty is 100% made in America, with rimfires like this one coming out of Bayonne, New Jersey.  MSRP is $899 with real world prices under $700 for a rifle bound to be a collector. 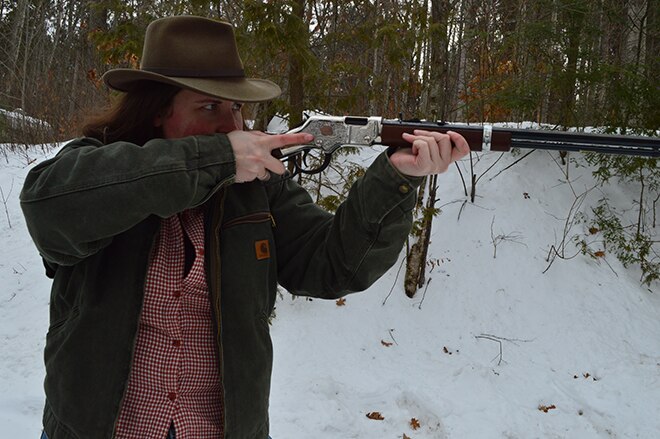 The Henry American Beauty is a gun any woman (or man) would love. (Photo: Kristin Alberts)

Just to show you the amount of thought and depth of emotion that go into Henry’s special designs, the American Beauty rifle was designed by company President Anthony Imperato’s late father, who passed away before the rifle could be completed.  The younger Imperato had the highly engraved American Beauty built not only as a tribute to American women, but in the memory of his father’s designs.  It’s a model intended to capture and honor the spirit of strong American outdoorswomen through the ages.  Think women-who-won-the-west. Who worked their tails off. Cleared the land, hunted for food, defended their families alongside the men.

And if you ask me, this rifle is not at all limited to the female demographic; rather, it’s a fine piece of American craftsmanship that both genders alike can appreciate and enjoy.  In fact, I’ve had several men gravitate to the rifle not knowing its name or intended market. 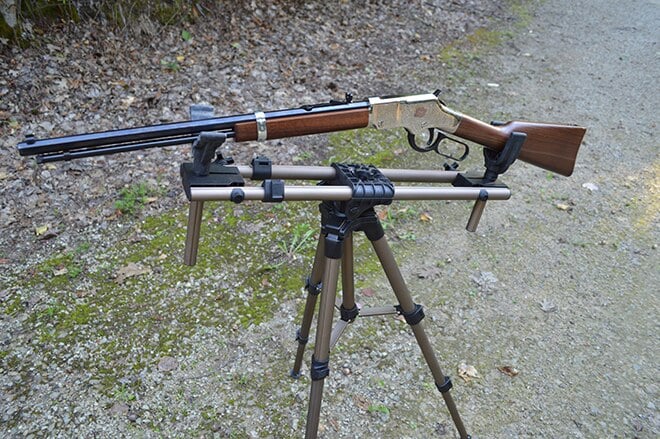 There’s not much that can be said of this—or most any Henry rifle I’ve shot—that hasn’t been said before.  The short throw lever action is smooth and easy to work. Even those unfamiliar with lever guns will quickly find that ejecting and chambering rounds becomes a natural extension of themselves.  The fit and finish is immaculate.  It comes out of the box as ready to go as any rifle. 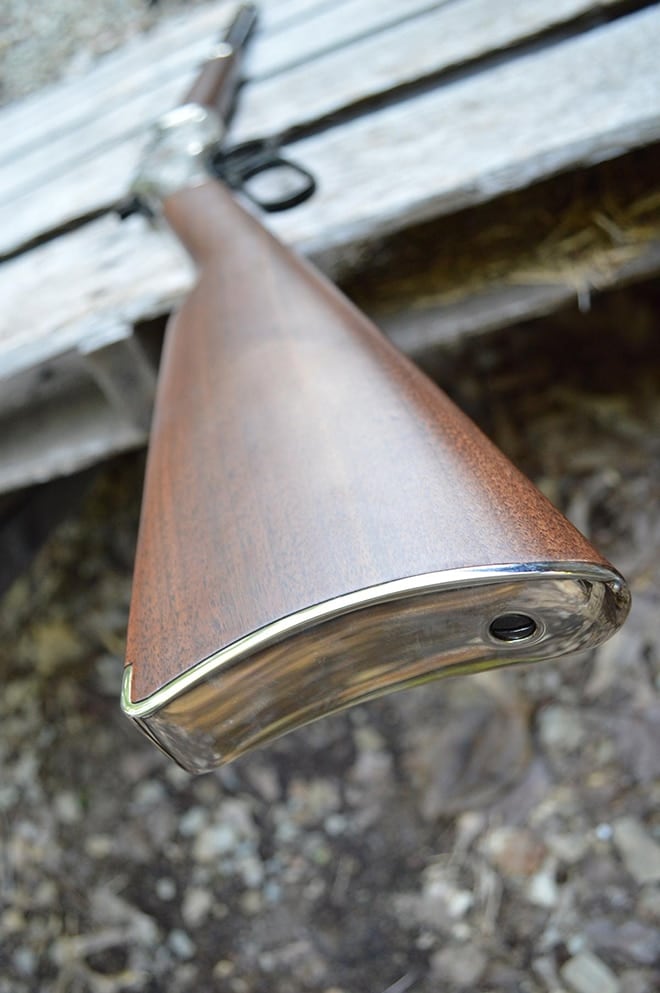 Though not as “fancy” as one may expect from Fancy American Walnut, the furniture is flawless with an above-average quality grain.  Protected by a fleece sock, the nickel-plated engraved receiver comes out like a work of art.  A silver buttplate and forward barrel band set the rifle sharply apart from its deep-blue barrel, mag tube, and lever mechanism.  Though Henry advertises the gun as coming factory drilled and tapped for easy scope mounting, our test gun came without.  Though more practical in many ways, I would not have the heart to mar this beauty with an optic.  Sometimes less really is more, and I’m a firm believer in the importance of learning to shoot well with good irons; in fact, these large Marbles irons are incredibly easy to acquire. 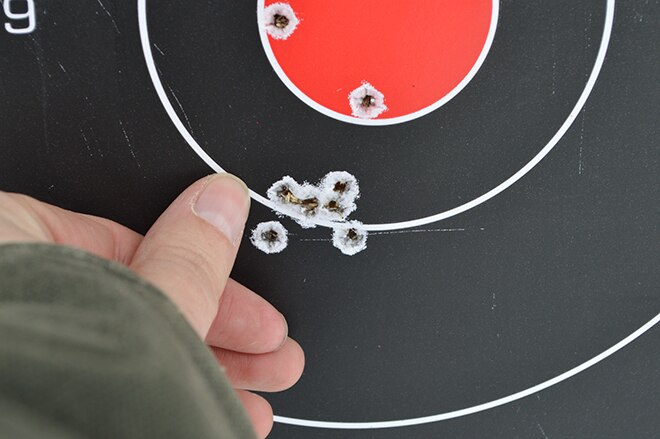 We shot CCI and Winchester ammo.  As expected, the little lever gun made quick and efficient work of them all.  Shooting quickly from an elbow rest at 25 yards, accuracy was as good as the shooter.  The gun really shines when shooting offhand, where the Marble’s white diamond and brass trim irons make sight acquisition easy and effective.  The trigger has the slightest bit of takeup, but breaks clean and is on par with the triggers of most lever guns. 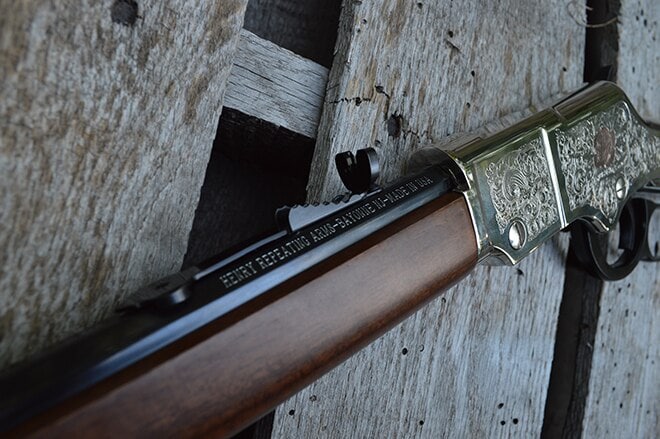 From small game to nostalgic tin can plinking to reactive spinners, the American Beauty is as capable as she is striking.  If you don’t believe me on the capable accuracy of the American Beauty rifle, check out 22Plinkster’s Youtube trick shot, complete with romantic introduction.

Sure, the naysayers will always cry “too expensive” or “my $100 cousin’s uncle’s gun can do the same thing.”  While that may (or may not) be true, I want the best gun that I can afford, and any collector or shooter of fine arms would be remiss to not consider a Henry like the American Beauty.

A rose by any other name 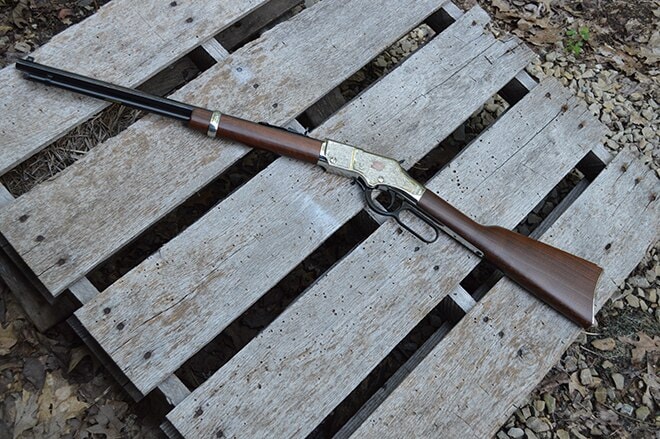 I like the story, I respect the way this “made in America or not made at all” company does business, and more specifically, I love the intersection of both outward beauty and quality worksmanship in the Henry American Beauty tribute rifle.  It’s a wonderful gun for a young shooter to learn with, and an even better one to pass down from one generation to the next.  The Henry American Beauty is a gun that’s as enjoyable to shoot as it is to admire.