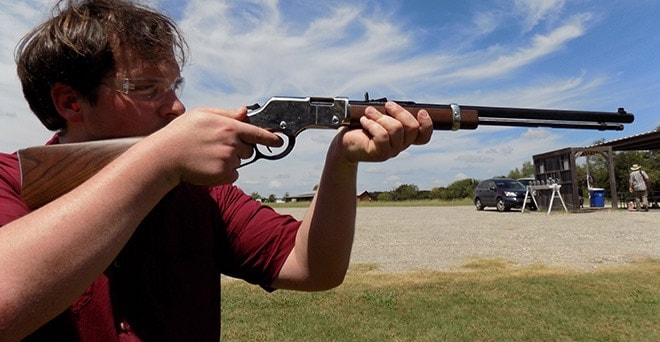 The lever action rifle and the 22 LR rimfire cartridge go together like watermelon and hot summer days. Both of these 19th century innovations are still around and perhaps as popular as ever, despite the march of time and technology. It is hard to find a gun shop that is not stocked with lever guns, especially those made by Henry Repeating Arms. 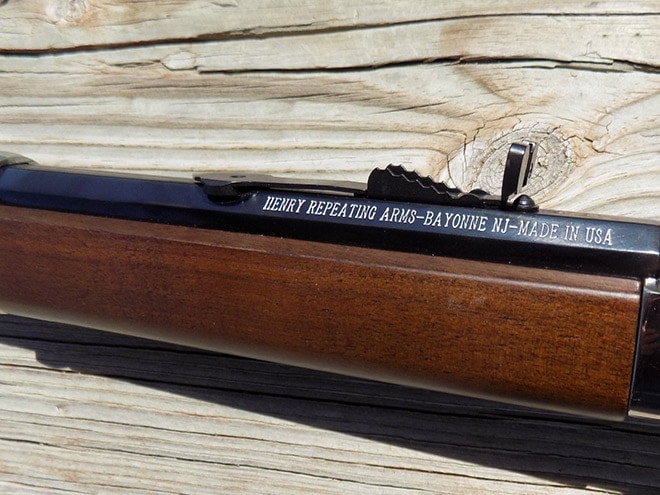 To the credit of Henry, they have kept the lever action alive and very well in the 21st century and they are made right where the lever action design originated, the United States. As a woodworker and a machinist by trade, I definitely appreciated the work put into their rifles at first glance and it was not until recently that I finally decided to give one a try.

I reached for Henry’s new spin on their classic Golden Boy, the Golden Boy Silver in 22 LR. 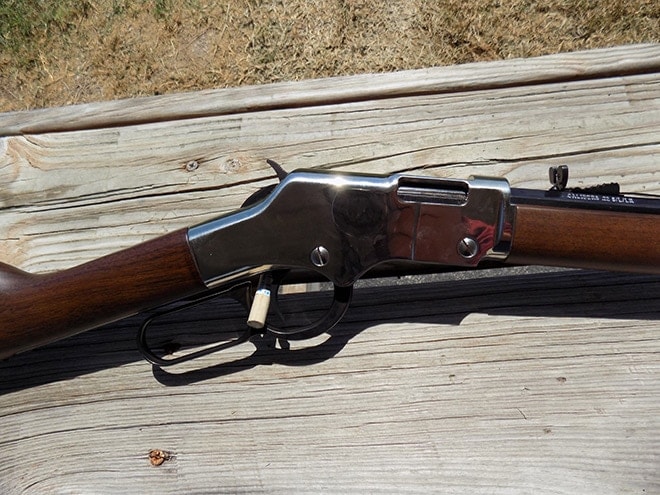 The Golden Boy Silver is, in essence, the same popular plinker that is the Golden Boy, except the Silver features a nickel plated alloy receiver, barrel band, and buttplate. This old fashion method of rust prevention is very well done and reflective enough to use as a mirror.

The Silver features a full length straight American Walnut buttstock and forend and a prominent 19.75 inch blued octagonal barrel, overly thick for the caliber  and made of 1130 series steel. 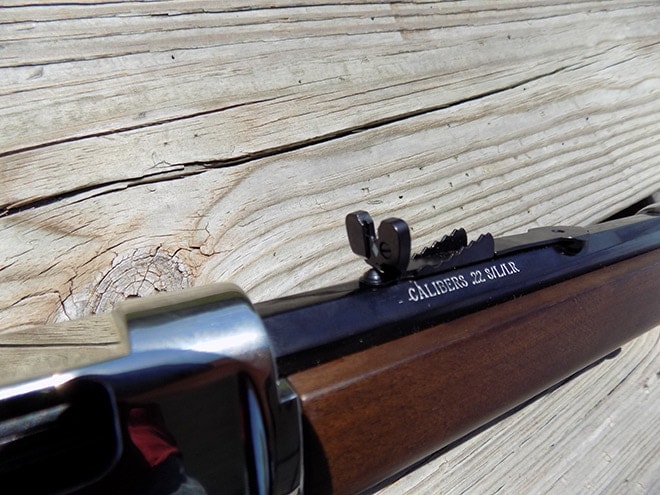 The barrel is topped with a Marbles semi-buckhorn rear sight that is adjustable for windage and elevation and a front post with a brass bead at the tip.

The Silver’s receiver houses an all blued steel lever action mechanism with a standard lever loop. Like all lever action rimfire rifles, the Silver is tube fed and is available in 17 HMR, 22 LR, and 22 Magnum. 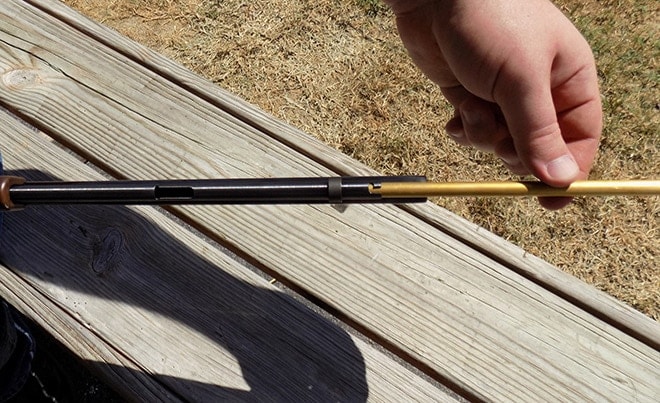 Twisting the knurled knob counter-clockwise frees the magazine spring so it can be removed for loading. (Photo: Terril James Herbert)

This handsome package has an MSRP of $599-675, but you can expect actual retail prices to be lower than that.

Now that we have established that the Golden Boy Silver is clearly top of the class when it comes to good looks, but would that translate to a stellar performance actually doing what the rifle was intended to do—shoot?

In many ways, the Silver should be the perfect contender in the central Texas heat and humidity so it was only natural to bring in a variety of ammunition and let fly.

The test ammunition all performed well for an initial twenty-five yard sight in.

*Velocity average of three shots, chronograph 10′ from the muzzle. Denoted in feet per second. 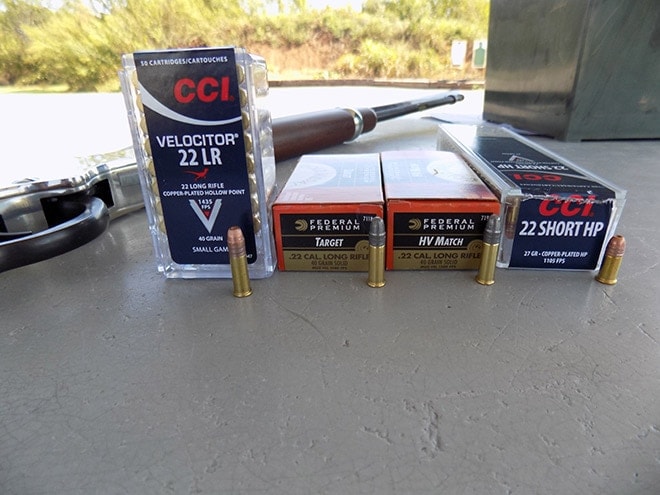 An asset of the lever action is the ability to digest a variety of different ammunition. (Photo: Terril James Herbert)

With a benchmark for accuracy established, my range partner and I decided to pick up the pace and stretch the Golden Boy Silver’s legs with some rapid fire drills and longer 50-yard shooting.

Loading the Silver is straightforward. First, ensure the rifle is unloaded by throwing the lever down and inspecting the chamber. Next pull the brass magazine spring housing out of the magazine tube and drop in individual cartridges. The 22 LR Silver will chamber and fire 22 Short and Long ammunition without a problem and the gun holds a healthy number of them: 16 rounds of 22LR and as many as 23 rounds of 22 Short. Once you have loaded, replace the magazine tube and chamber a round.

Though heavy for a 22 caliber rifle, at 38 inches in overall length, the Henry Silver is still handy with classic lines to boot. (Photo: Terril James Herbert)

Carrying the Silver was not much of a chore despite the gun being somewhat heavy for its class at 6.75 pounds. Carrying the rifle while loaded is safe and accomplished with a traditional half-cock notch in the hammer. Simply pull the hammer back slightly and it locks up the trigger and keeps the hammer from falling on a live round. The Silver does lack sling attachments from the factory but the heavy octagonal barrel allows for good balance in the hand. 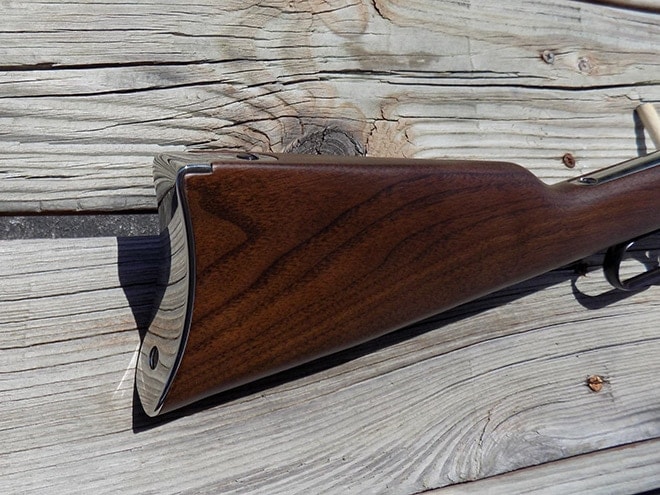 It also keeps this balance when shooting, making holding on target easy to do. I was quite taken away with how comfortable the rifle is to shoulder and fire. The stock length is a generous 13.75 inches and clearly meant for adult shooters—which is refreshing considering many 22 caliber rifles on the market are short and youth oriented. Though the nickel buttplate felt a bit slippery against the shoulder while working the lever action between shots, this comes with the territory of going with a vintage design. This did not hinder shooting. 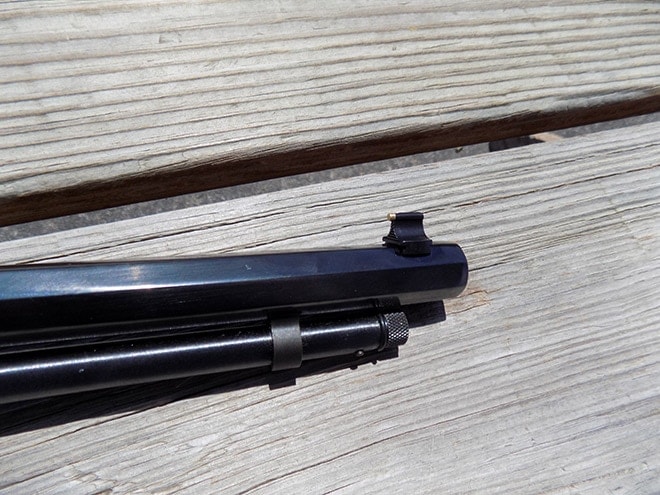 It was easy to empty the magazine in a matter of seconds with a quick, effortless flick of the wrist and a light touch on the trigger. The sights worked well and picked up well on target.  Hitting small soda cans and rimfire steel spinners at twenty-five yards was easy. Hitting a small torso silhouette at fifty yards was done with boring regularity, but at one hundred yards the front sight began to cover up the same silhouette. Unfortunately, the Silver’s receiver is smooth and has no provision for scope mounts, so the Silver will shoot as well as you can with the iron sights. 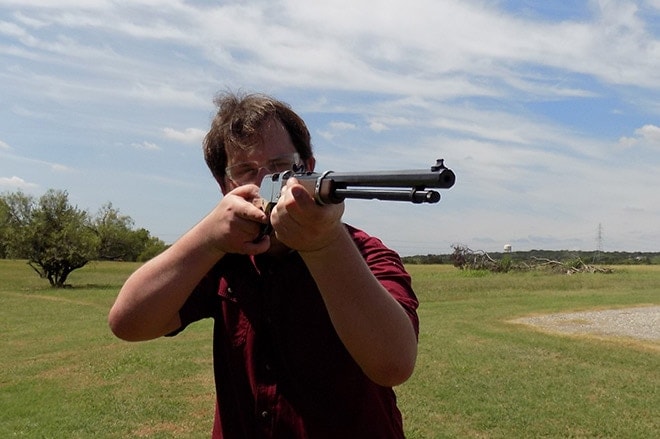 The octagonal barrel is hefty, but it is classic and gives the Silver a great balance while shooting offhand. (Photo: Terril James Herbert)

Where the Silver shines best is its reliability. Given that it is manually operated, it will cycle ammunition of different power levels and it will do so despite the fact that the rimfire ammunition fouls the action quickly. In a semi-automatic, this means the eventual malfunctioning without a good cleaning, but in the Silver, it is no problem. The only ammunition hiccup occurred when attempting to load the magazine with too many rounds: the last round hangs up in the carrier when cycled. But when loaded right to capacity, the Silver runs like a champ and shoots extremely well. 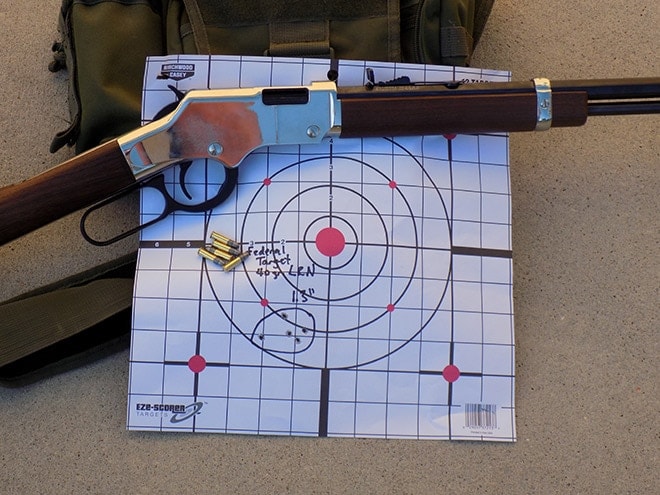 Coming off the success of the brass framed Golden Boy rifle, it seemed natural for Henry to add additional color to the lineup. But the Silver is more than simply a color variation. The nickel plated finish was well executed and held up well in the humidity, sweat, and banging around of the test without so much as a single nick. Between two shooters, the consensus is such that the nickel plating actually adds a bit more lubricity for an even smoother action. While not youth friendly, the adult gets to have a full sized rimfire rifle that not only looks great, but shoots great as well. That’s something I can’t say of other rifles in an age of cheaply manufactured plastics. So if you are a varmint hunter, a small game hunter, or just looking to pop paper and tin cans on the weekend, the Golden Boy Silver is surely worth a look.