Rimfire rifles tend to be of the handy sort. The firearms tend to be short and lightweight and the ammunition is proportionally lightweight as well. In general, we strive to make rifles shorter and handier so it came as a surprise to me when Henry Repeating gave their Frontier rifle a longer barrel–an almost unheard of twenty-four inch barrel to be exact.  The not so imaginatively named Henry Frontier Long Barrel looks the part but is all that barrel worth the price of admission?

It is fair to say that most Western guns from the 19th century were not handy affairs like what we see in the movies and the Henry Frontier Long Barrel captures this. In the days of black powder firearms, extra barrel was desirable for a more complete burn of powder and higher velocities as well as a sharper, easier to see sight picture. The Henry also captures this, but is chambered in 22 LR and 22 Magnum.

The rifle is thoroughly traditional with a blued, heavy octagonal barrel and fixed sights–an adjustable rear notch and front bead. That heavy barrel is offset by an oiled walnut stock. The only piece of plastic on this rifle is the checkered butt-plate, while the slick, steel lever action is housed in the same alloy receiver that serves as the heart of Henry’s lever action rim-fire rifles. 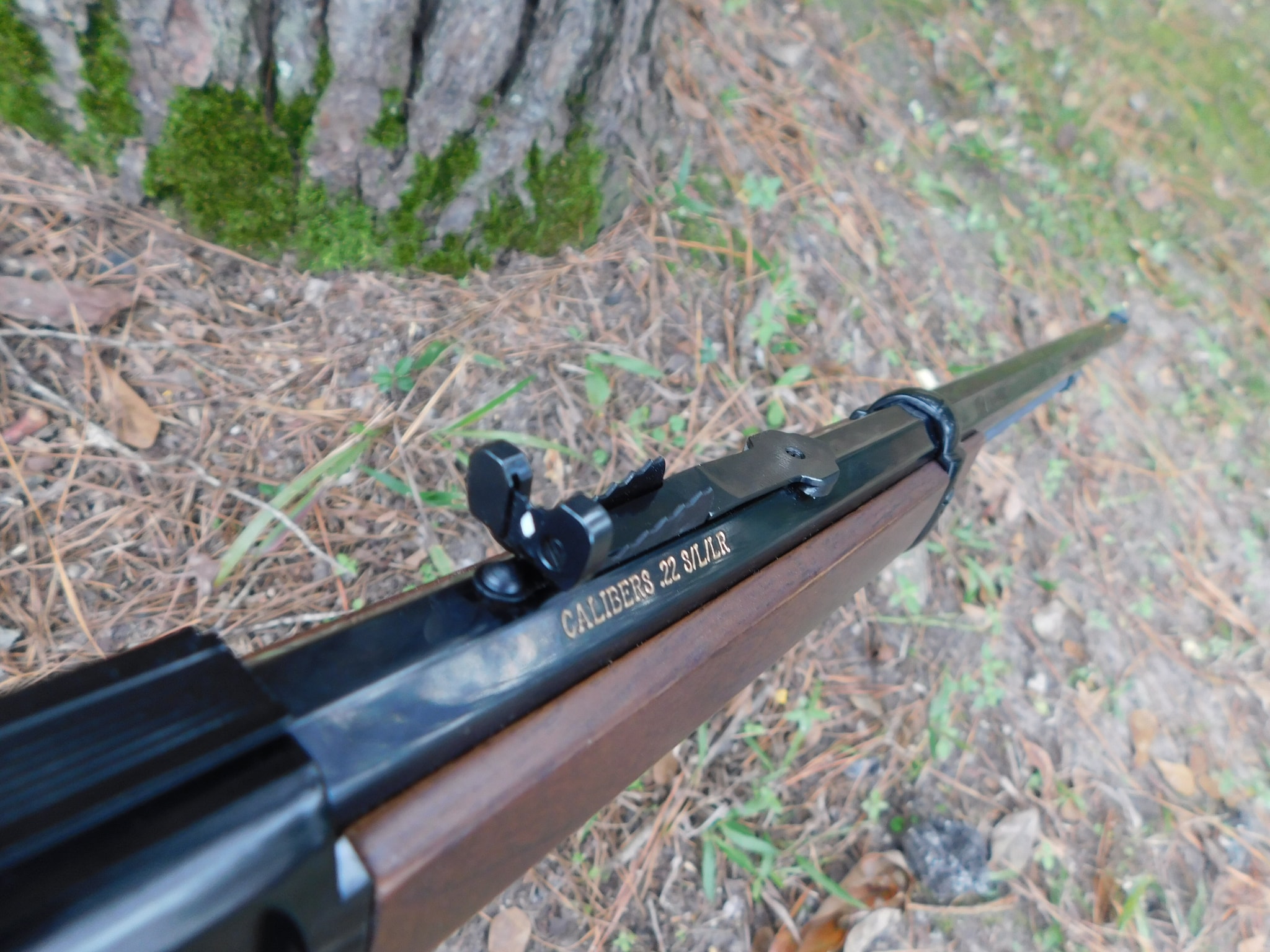 Like Henry’s other rifles, the Long Barrel is tube fed via a tubular magazine housed under the barrel. This particular model in 22 LR holds 16 rounds of 22 LR or 23 rounds of 22 Short. But there is another LB model out there that will definitely have you talking–the threaded model. This suppressor ready rifle comes with a 1/2×28 threaded muzzle and a shorter magazine for loading without interfering from the suppressor of your choice.

When I first took the Henry Frontier Long Barrel out for a range workout, I noticed immediately how commanding the rifle looked compared to the more powerful center fire hunting rifles out there. Yet, it looks like a big bore buffalo rifle at a cursory glance. The fit and finish is typical Henry with no appreciable defects and a tight wood-to metal fit- and a lack of sharp edges.

The rifle is adult friendly with its lengthy barrel and generous 13 3/4 inch butt-stock length. It is easy to carry by grasping the receiver. The rifle has a good balance, which gives it points in my book despite the lack of sling studs.

The rifle shoulders nicely with no slippage and points instinctively. It has that nice long barrel and a corresponding longer sight radius–the distance between front and rear sight. I expected great accuracy, or at least greater than a usual carbine length 22.

The Initial Work Out

In my book, a good 22 rifle needs to function well with a variety of ammunition without any favoritism toward one load or another, so I compiled a number of offerings including:

The first four of these offerings were grouped resting at a distance of twenty-five yards to test theoretical accuracy.

Loading the LB is done like any Henry rifle by pulling the brass magazine spring tube out of the magazine and dropping rounds in one at a time through the loading port. Work the lever action briskly to chamber a round. Despite the heavy winds of this sight-in session, the relatively low-velocity CCI 22 Shorts grouped the best with a .65″ group. The Federal HV Match, always a consistent load for me, came in second at .87″. The Velocitor and Remington varieties each came in at just under two inches. 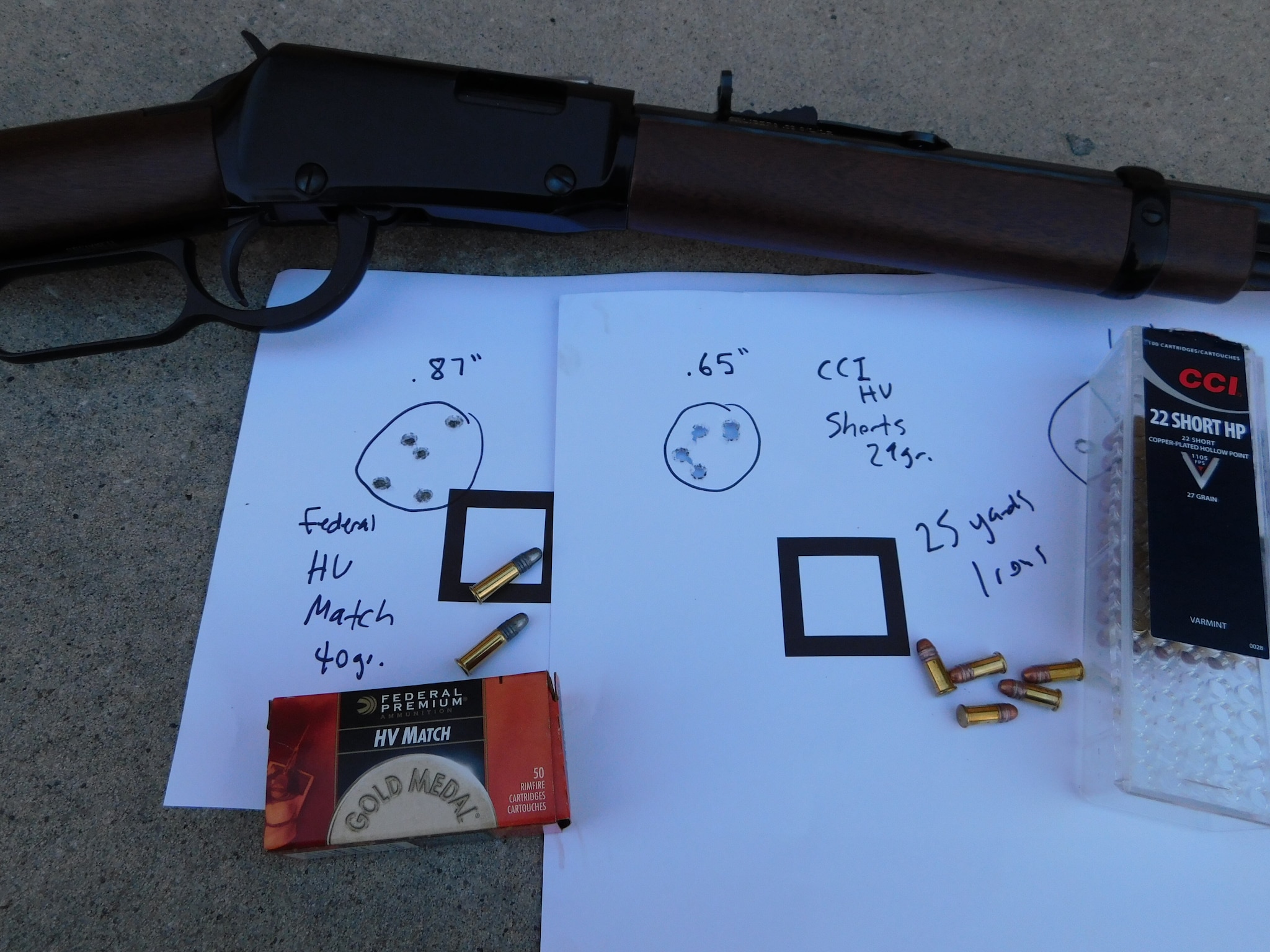 Moving out to fifty-yards proved to be something of a challenge to draw a bead on the 1 inch square paper targets as the front bead sight, which is not fine in nature, covered up the target requiring a bit of reconfirmation for each shot to make sure I am lined up. Hitting that small of a target is a bit unrealistic with the iron sights and the groups didn’t wow, so I switched to a larger target with a more prominent 6 inch bulls-eye.

With the front sight now crisp and clear, thanks in part to that long sight radius, I aimed dead on and let fly with eighteen rounds of the Federal HV Match load, putting them all within a 3.2 inch group that was well-centered on target. Very good iron sighted accuracy. More than enough to pop cans and varmint with. Some three hundred rounds were fired in this session. Most of this was done off hand and standing. Here I got a feel for how the LB handled. It was splendid to tuck in the shoulder and draw a bead on target. The octagonal barrel made it balance naturally in hand. The action was smooth, with no tightness in the throw of the lever down and back up. It is fast and it is fast and easy to make the rifle safe when you are done shooting. Simply drop the hammer into it’s half-cock safety notch.

The rifle fed the ammunition very well and fired all cartridges in my little round burning session. Ejection was smooth and brisk as well, even with the stubby Shorts. The Federal rat shot loading, with its longer brass case, also had no issue firing and ejecting. There was nearly no report at all from the CCI 22 Shorts or the low velocity CCI Suppressor rounds with the only noise being from the hammer falling. That’s Hollywood silent. However it was the 22 Short rounds that were problematic. Throughout the test, the last round never failed to nosedive into the carrier. It needed the persuasion of a knife to go in.

The Henry Frontier did well on its first outing, but it was time to stretch its legs.  I wanted a bit more precision than what the traditional iron sights could afford me, so I opted for glass.

Mounting a scope on the LB is easy. I took a Tasco 4×15 optic out of the drawer and tightened it down on the 3/8 inch base.  Then I set out for the range for an exercise at more extended ranges befitting a long-barreled rifle. I set upon chipmunk sized steel poppers from 25-200 yards. I was able to land hits out to 75 yards with just the iron sights offhand. The little optic made all the difference further out, however.

Using Federal HV Match, hitting the poppers at 100 yards was boringly regular from a rest. Thanks to the rifle’s front-heavy weight and generous length of pull, I could comfortably hold ‘er steady and hit the varmint heads regularly despite that 200 yards is somewhat of a stretch for a 22 LR rifle.

So what is the verdict on yet another Henry lever action rim-fire rifle now in the mix? Why get this over a handier model?

True, the Henry Frontier LB isn’t the lightest weight rifle even from Henry. But 24 inches seems to be a comparative sweet spot with the velocity and sight radius benefits of a long barrel, but not unwieldy. Swinging the rifle  to quickly pop the poppers  was no problem. Yet it did not tire the arms to hold the LB. I don’t think it is perfect, however. I like sling swivels and I also wouldn’t mind a tubular magazine that is just as ridiculously long as the barrel–containing a more ridiculous amount of ammunition. But I digress.

You won’t find small children wielding the LB, but it is a finely crafted rifle meant for grown folks with some serious accuracy for serious rim-fire work. 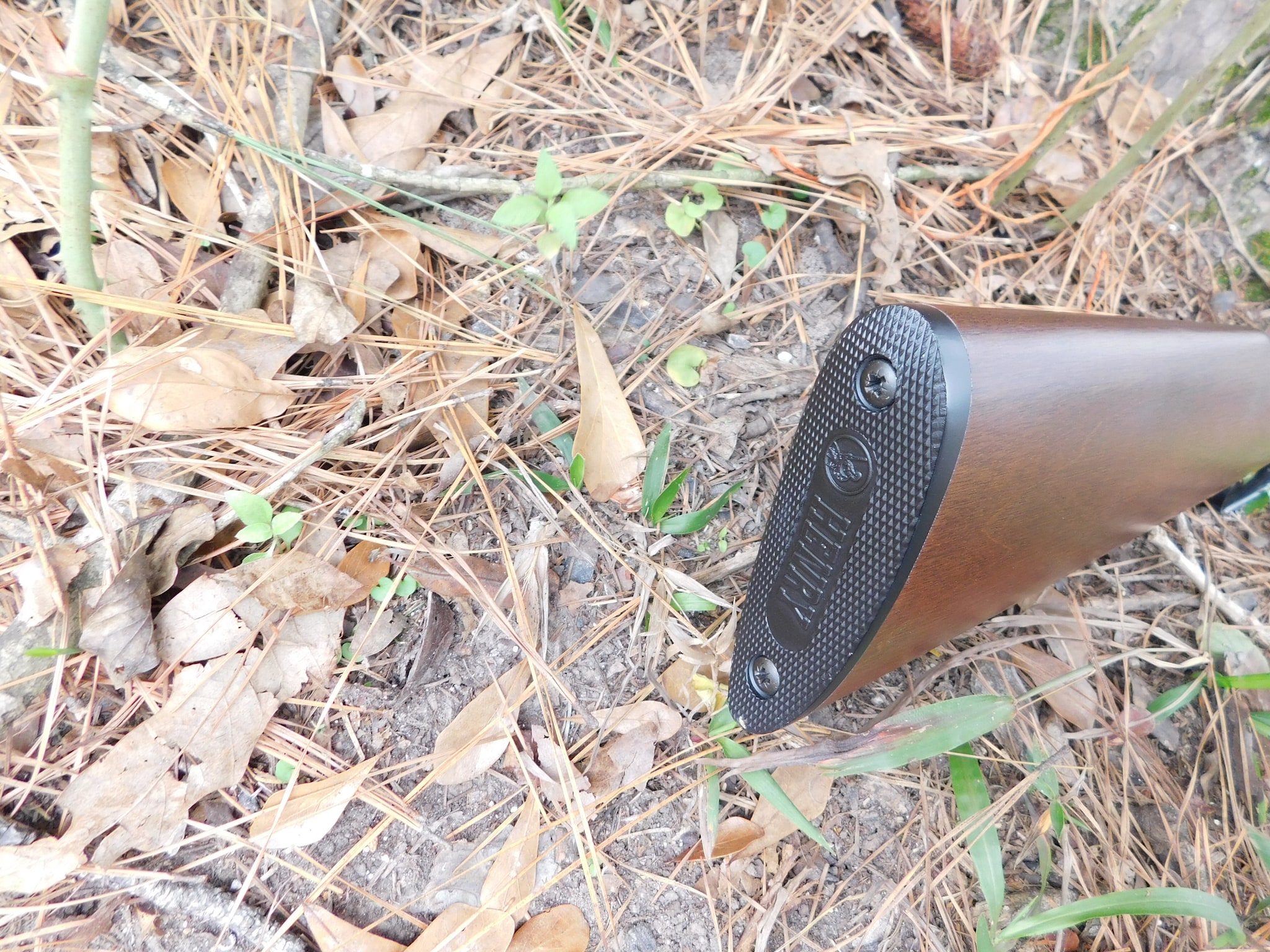 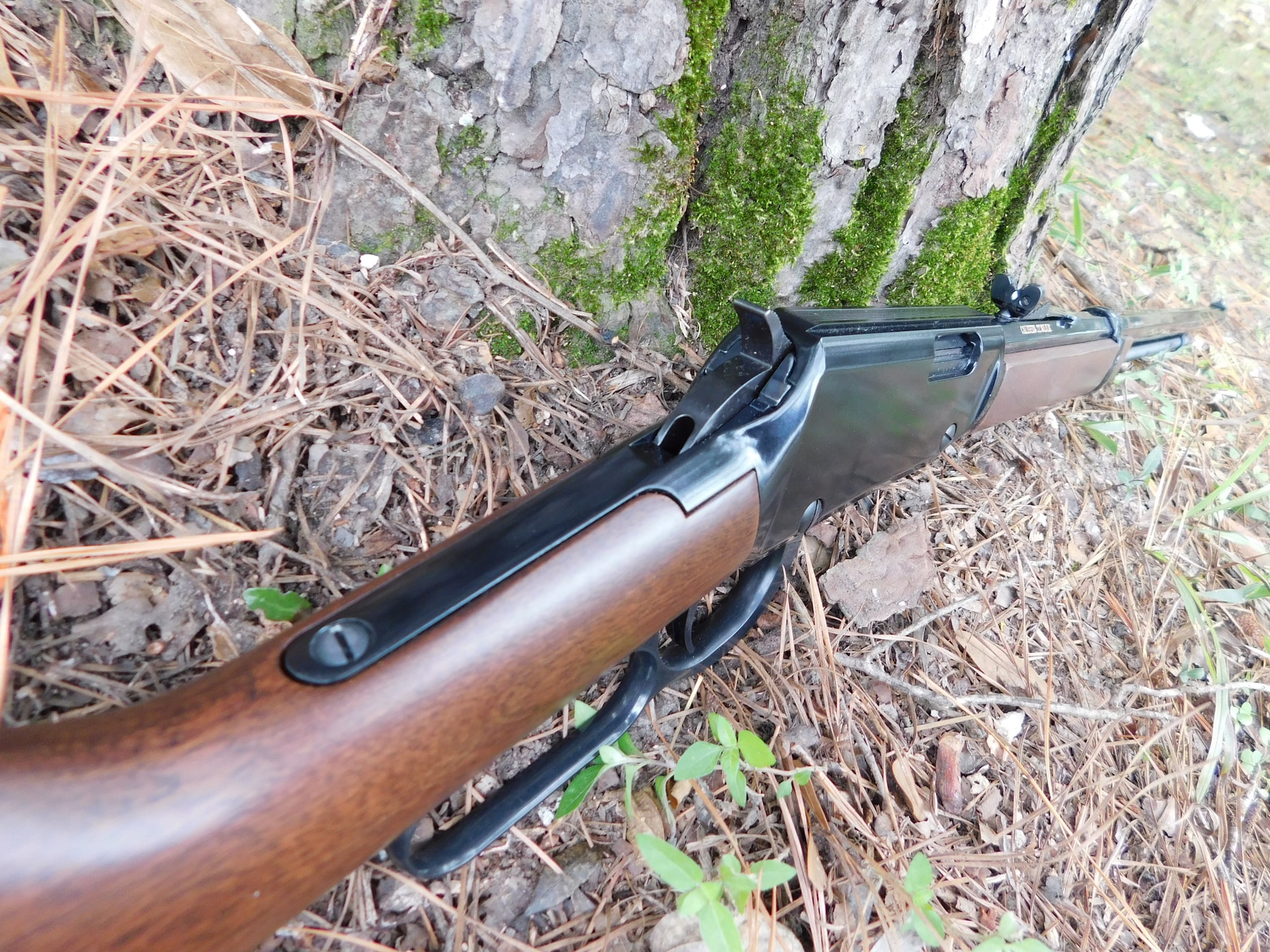 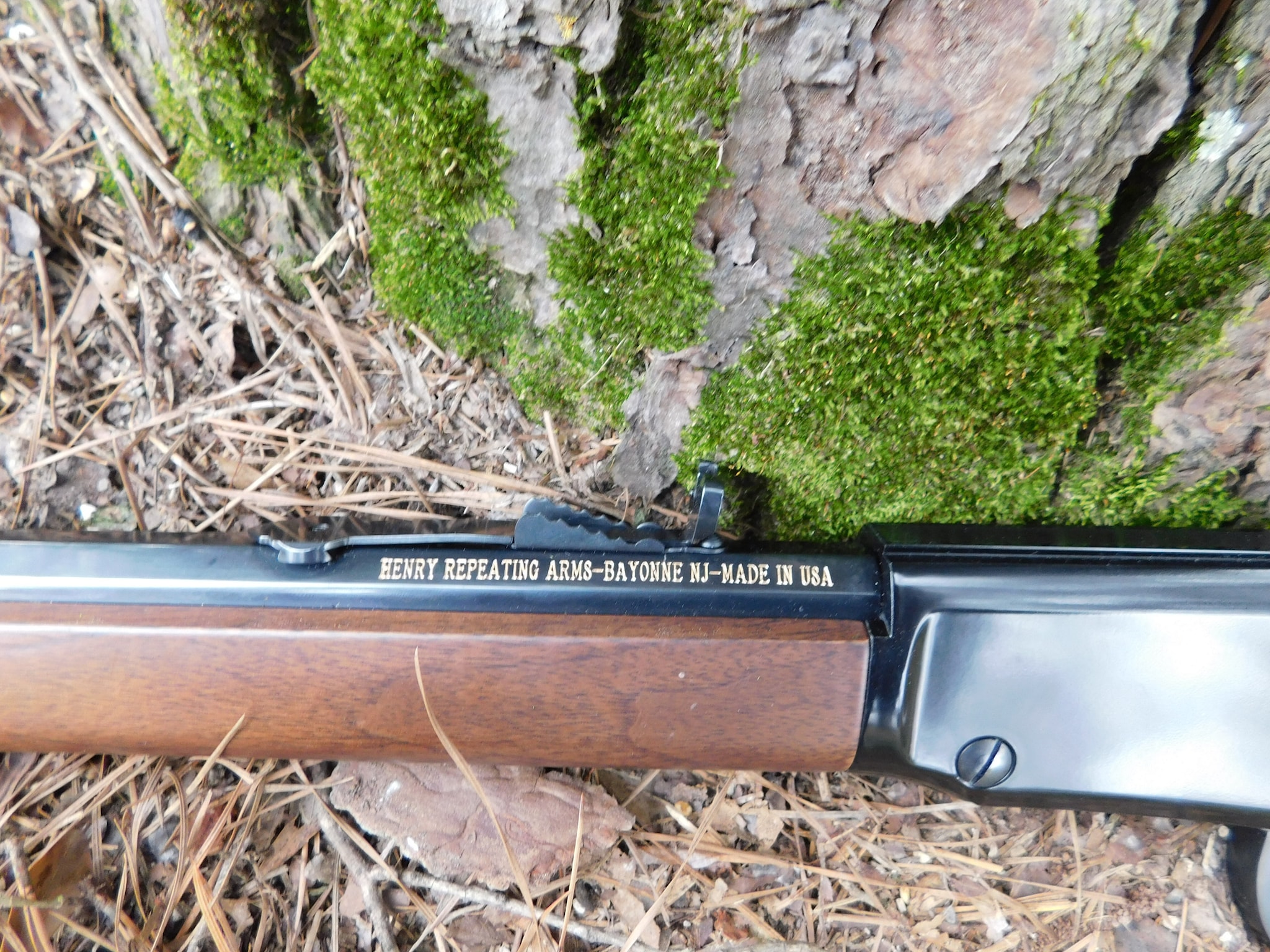