The all-American company known for lever guns in special editions is at it again, this time with pairs of 30-30 and 45-70 chamberings in Wildlife Editions.  While the Steel Wildlife rifles have stolen the show with their steel and gold, its the highly-polished Brass guns that really turn heads.  At the same time though, they’re made for knocking down game. Henry’s duo of Brass Wildlife Edition leverguns are indeed, as the company headlines, “two big-game getters that stand out in any camp.” 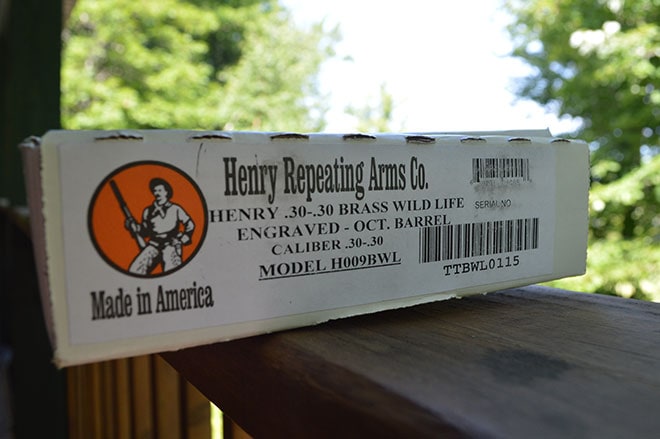 Henry’s new-for-2016 Wildlife Edition rifles are paired with the same 30-30 and 45-70 calibers and both wear the same engraving patterns.  The Steel version, obviously, has a matte blue steel receiver and is lighter than the hardened brass both due to both the material weight as well as the Steel’s round barrel, which is less weighty than the octagonal-barreled Brass rifle. The 30-30 model engraved receivers feature vine scrollwork and braided borders surrounding a buck’s head on the right side, with the same motif and a leaping buck on the left.  For heavy hitters, the 45-70 receiver is engraved with vine scroll and braided border with a moose head on the right and a bear on the left.  Also setting itself apart from the 30-30, the 45-70’s come with a large-loop lever. 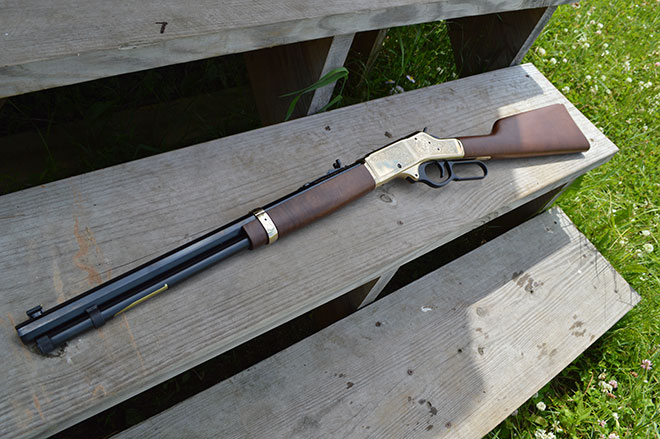 With the 30-30 representing the quintessential American deer rifle and the 45-70 covering larger quarry like the engraved moose and bear, this combo has “historical hunter” all over it.  There are, without a doubt, more ballistically efficient cartridges for modern day hunters, but purists will adore these rifles.  In fact, there has been a significant resurgence of 45-70 rifle production of late, and more than a few young shooters are still cutting their teeth on the 30-30 caliber for whitetails. 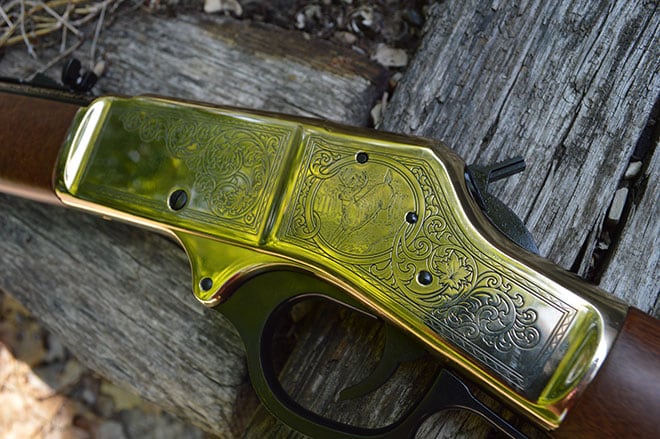 Both of the Brass Wildlife rifles retail for $1250.  The Steel Wildlife editions feature 24K gold-filled engraving and retail for $1450 apiece.  While the prices may seem steep, these are collector quality guns that can be both hunted with and displayed for lifetimes.  Best of all, they are American made and chambered for two of the calibers that have defined American hunting for 100 years. 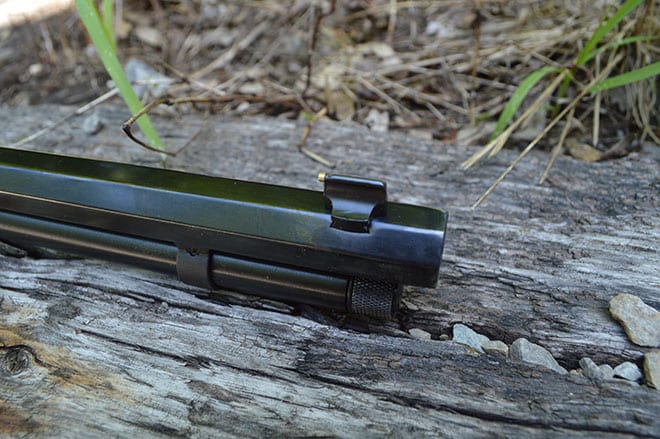 Our test 30-30 Brass Wildlife model has a five round capacity, a 20” full octagon barrel with polished brass trim, and high-grade American Walnut stocks. With an overall length of 39” and a LOP of 14,” these leverguns are maneuverable in the deer woods, but at 8.3 pounds, plenty hefty to eat up any recoil. In fact, the recoil is so negligible, you’d never even know the 30-30 wears a polished brass buttplate instead of a rubber pad. The rear semi-buckhorn sight and front brass bead are standard fare on Henry rifles, but like most big bores, these are also drilled and tapped for simple scope mounting.  Also typical of Henry is the buttery-smooth lever operation and fine attention to finish detail. 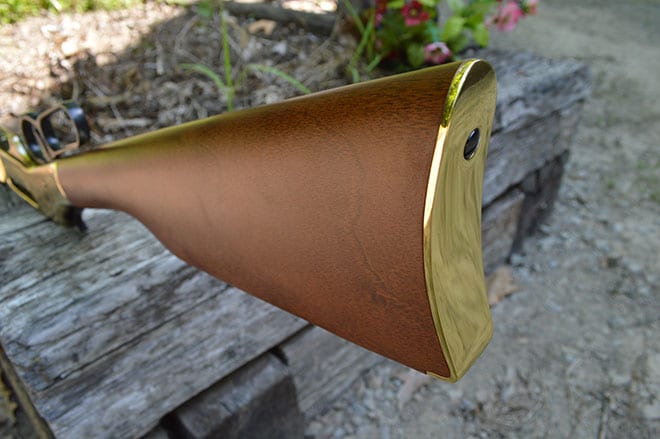 We didn’t have the heart to detract from the looks of this rifle by mounting a scope, so we shot it with the traditional iron-sights.  Even for someone accustomed to shooting with optics, the Henry irons were quick to acquire in all types of light and left me feeling confident on taking clean 100+ yard shots on whitetail vitals. 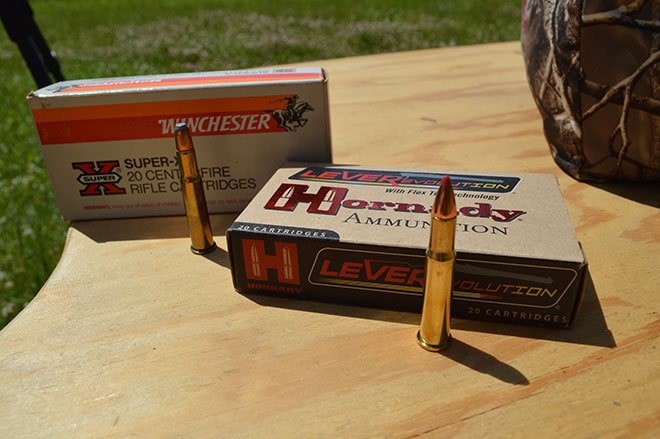 Partner a Henry lever gun with Hornady’s LeverRevolution ammunition and you really have something to write home about in terms of wringing every ounce of performance and accuracy from an old cartridge.  Our test gun loved the 30-30 Lever Revolution ammo with 140-grain Monoflex bullets. The Brass Wildlife Edition performs as admirably as any other Henry rifle, and does its job while looking darn good.  If the sight of a brightly engraved brass receiver partnered with traditional calibers makes your heart flutter, these guns are for you. 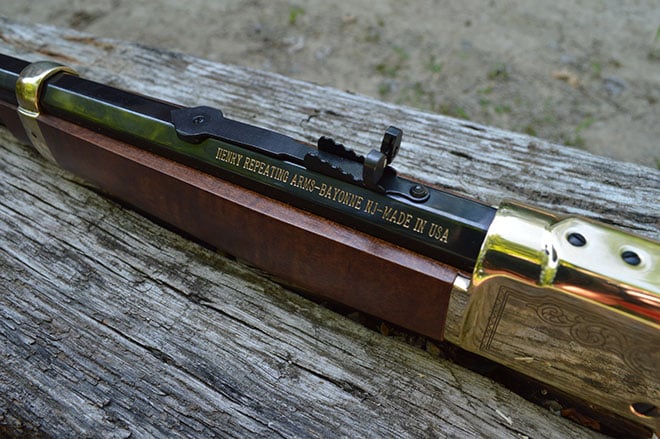 With their new line of Wildlife Edition rifles, Henry tips its hat to all those Americans who came before, to those who lived off the land, who hunted to survive, and forged westward in our great country.  So if you’re in the market for a gun with a bit of nostalgia, one that you can hang on the wall, turn heads with at camp, and also use as a tool to fill the freezer, look no further than Henry Repeating Arms.