My grandfather never owned a lot of firearms, but the few he did, he knew how to use. Next to his 7mm Winchester Model 70 bolt action he had two lever guns both by Marlin: a 30-30 and a nearly identical gun in 410 bore. As someone who is relatively new to shotguns, I was and still am intrigued by the concept of a lever action shotgun.

The concept is nowhere near new. One of the best-known shotguns of all time is the lever action Winchester 1887 used by outlaws and fictitious cyborgs alike. The lever action 410 itself has been around for a while. Winchester had a model for years and Marlin continues to make the 410 from time to time, but the latest addition is Henry’s new 410 Lever Action Shotgun.

This new addition to the platform is available in a longer, field model with adjustable chokes or a handy “carbine” model. As a fellow used to longer, unwieldy shotguns I opted to get my hands on a 410 “carbine” at all costs. It was sure to be an introduction to a new platform and a new chambering I had never fired before but it was also to be a challenge to pinpoint whether to classify this gun as niche. 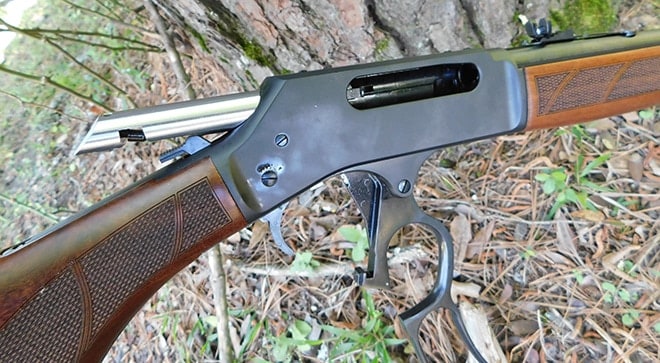 At first glance the 410 Lever Action might be mistaken for a similar Henry lever action long gun in whichever caliber you please. 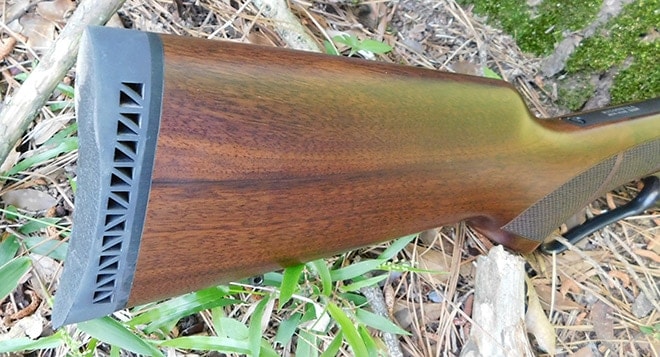 The rubber butt-pad provides plenty of comfort, not there is much recoil from any 410 load anyway. (Photo: Terril Herbert)

The 410 Lever’s oiled walnut stock stands out on the rack and both the fore-stock and the pistol grip are checkered. The buttstock has a rubber recoil pad and a sling stud attached to the bottom of the stock to pair with the stud on the nose cap just behind the exposed tubular magazine.

The magazine, by the way, holds five rounds of 410 shells—that’s 2.5 inch shells, not 3 inch shells. This shotty will not chamber three inch shells, but you can use both birdshot, buckshot, and slugs as the twenty-inch barrel is cylinder bore with no choke. 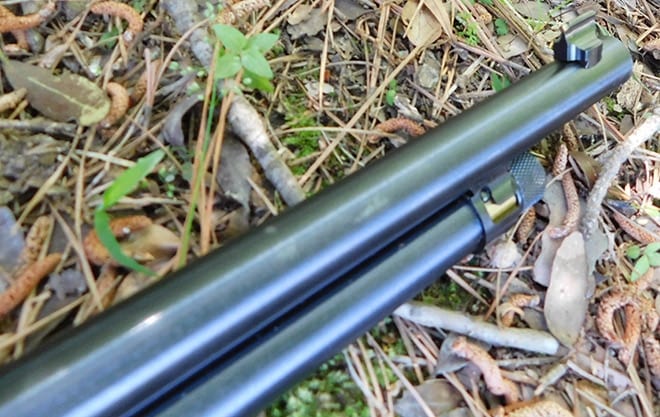 The Henry’s sights are excellent, for a shotgun, and the gun comes into its own as a slug shooter. (Photo: Terril Herbert)

The sights consist of the usual Henry, but unusual for a shotgun, semi-buckhorn rear sight and brass beaded front post sight. The receiver is milled steel and is drilled and tapped for a scope mount. Unlike other Henry guns, the 410 does not have a half-cock safety on the hammer.

Overall, the package weighs in at just over seven pounds and is a hair over forty inches in overall length. Handy, but adult sized too as the buttstock has a generous fourteen-inch length of pull. 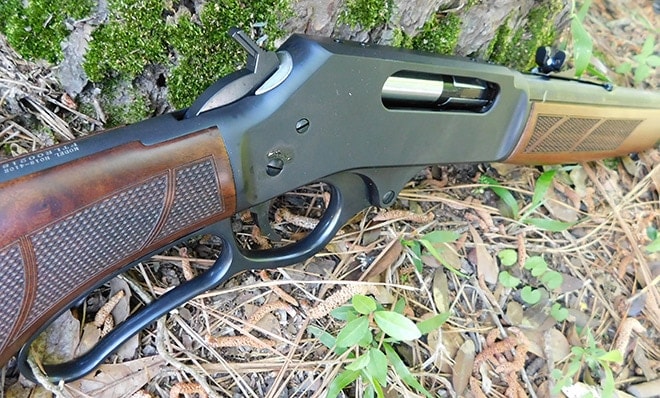 Aesthetically, I was impressed by the fit and finish of the gun with no obvious defects. The action was tight, but smooth in operation too. And it was in 410, the smallest available shotgun chambering and one I had never fired.  Needless to say, I was curious to get this oddball out to the range. 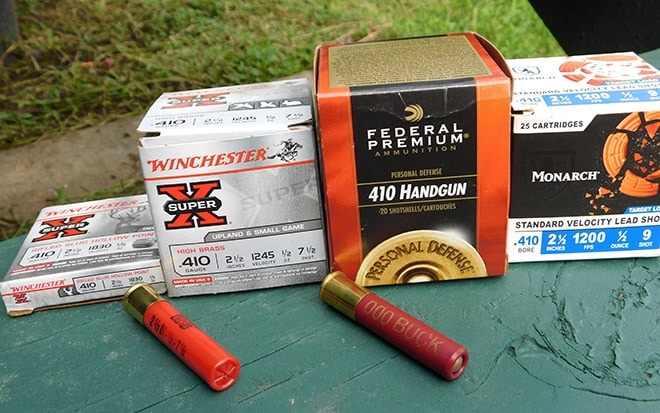 The ammunition used in my test. Though clearly set up for slug use, the Henry will happily digest shotshells. (Photo: Terril Herbert)

The 410 bore is very popular today for new shotgun shooters, survival applications and, most recently, in defensive handguns, so it’s easier than ever to get a variety of ammunition for serious use. Due to costs, I ran mostly Winchester No. 7 ½ and PPU No. 9 birdshot field loads through the Henry 410, though these loads may better adapted to clay shooting and small game. I chose Federal 000 buckshot as a “self-defense” ammunition and finally Remington Slugger and Winchester 1/5 oz. slugs to round out the test.

As a deer gun

The Henry 410 “carbine” wears both a front sight and a rear sight, while most factory shotguns do not. So, I was curious how the little gun handled slugs—single projectiles appropriate for larger game. My run with the slugs were also my first shots with the gun and, starting out, things did not go so well.

Loading the Henry 410 is like any other Henry. Simply grasp the knurled magazine tube knob and turn it to allow the brass tube to be pulled out. Insert five rounds into the loading port and then close it back up. Rack the lever to chamber a round. 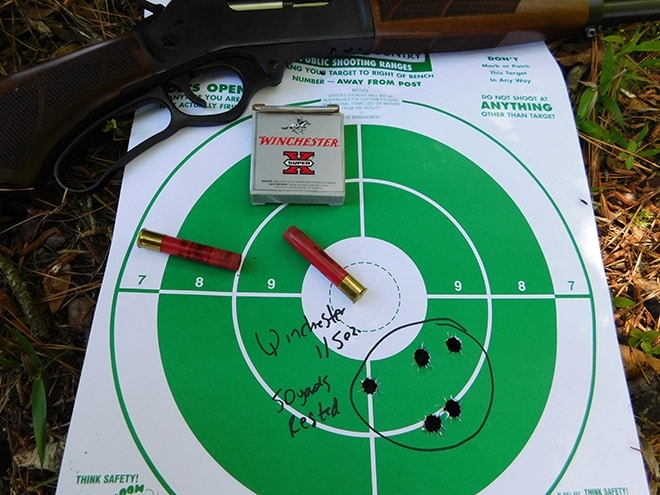 A typical group using the Henry with Winchester slugs from a rested position. (Photo: Terril Herbert)

The Remington Slugger 1/5 ounce slugs were certainly nasty when they hit the target, but right off the bat I had failures to extract. I racked the lever and the shell stuck in the chamber. Clearing it with the intervention of the pocket knife was all it took, but it kept happening once or twice per magazine of five. Later while running Monarch No. 9 field loads through the shotgun, I encountered the same problem. Upon inspection, I noticed that in these situations, the extractor bulged out after an attempt to push the bolt into battery, unable to lip and grab the rim of the case. I switched to Winchester slugs and I had no issues firing, extracting, or chambering.

Later on, I gave the Henry a good cleaning with special attention to brush down and oil the extractor and the bolt face. Afterwards, I had no issues with any of the ammunition used. In any case, I got a taste of the power and accuracy of 410 slugs for the first time. Recoil was almost nonexistent, in fact, the need for a rubber recoil pad was somewhat redundant given the light recoil of the 410.

The thick brass magazine tube spring housing is easy to manipulate and loading the gun by just chucking a round into the chamber is easy. (Photo: Terril Herbert)

Despite shooting my chronograph, the Winchester 1/5 ounce slugs—whose projectile weighs in at 88 grains—were clocking in at an average of 1782 feet per second. After running the numbers, the muzzle energy of this load was 620 foot pounds of energy. To put that in perspective, that is easily in .357 Magnum territory.

At fifty yards, lining up the sights on a small target was relatively easy. Just put the front brass bead where you want the bullet to go and line with the semi-buckhorn rear and let the trigger break. Though the trigger isn’t overly light, at about five pounds, I could get a 2.5-inch group with the Winchester slugs at 50 yards and it can be done reliably. The rifle sights help achieve this accuracy over a standard shotgun with a simple bead front sight.

Throwing out the shot 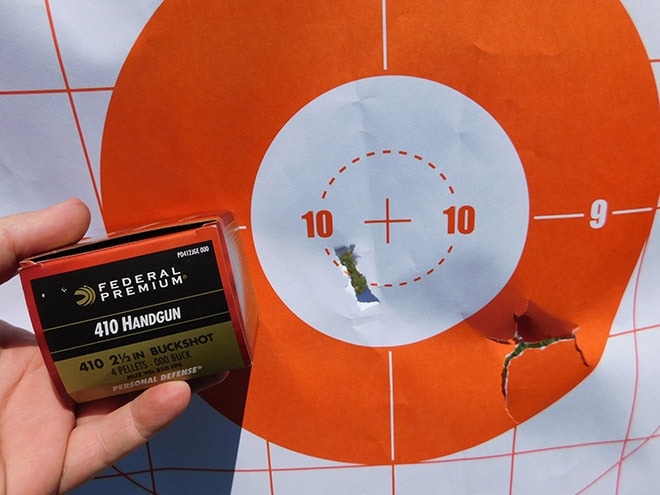 The shot shells were quite good at seven yards… (Photo: Terril Herbert)

It was clear that Henry’s 410 lever action carbine is best setup for using slugs, but being a smoothbore gun, it will accept shotshells as well.

I opted to pattern my two shot offerings, Winchester No. 7 ½ field load and Federal Handgun 000 buckshot, at both seven yards to simulate a pest control or a home defense defensive scenario and then at twenty-five to simulate a more typical small game hunting scenario.

At seven yards, the Winchester field load grouped into about a fourteen-inch pattern but things got worse at twenty-five with the entire 3’x3’ target being plastered with shot. Only seven pellets hit the actual aiming point. 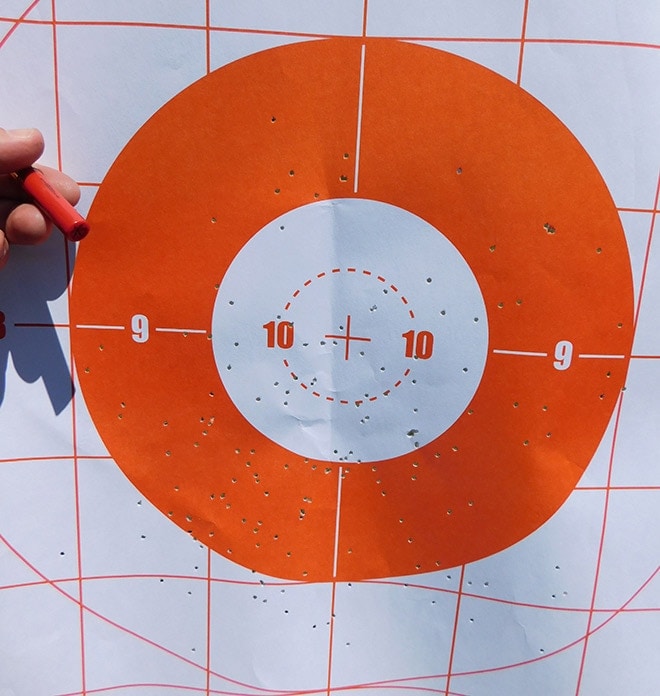 …though the birdshot started to suffer further at twenty-five. (Photo: Terril Herbert)

The buckshot did better, though with only four large pellets. The pellets fell close to the point of aim and carved a single jagged 1.5 inch hole at seven yards. At twenty-five yards, the group opens to about three inches. Clearly the 410 out of this carbine, lacking a long barrel or a choke to compress the shot for a tighter pattern, is range limited to twenty-five, perhaps thirty yards.

This determination was played out when I attempted to shoot a round of trap with the Henry. The semi-buckhorn rear sight, so good for throwing those slugs, covered up the flying clay targets to an extent. Even so, despite this and the 410 bore’s lack of shot-throwing ability, I finished the round with seven hits out of twenty-five clays. All things considered, I will take it.

Overall the Henry 410 Lever strikes me as a firearm looking for a purpose. But in shooting it, I think there is a reason the 410 lever has been around and is here to stay for the foreseeable future. After giving the bore and chamber a good cleaning of the factory grease, the Henry has been nothing but reliable. On the range, the gun is mostly effortless to operate though the plastic shot shells offer a different feel over brass cased ammunition that may feel odd in the hand at first.  In terms of speed, the lever loses little over a conventional pump action shotgun and in terms of power the 410 slug will do the job on medium game like deer and hog out to about fifty yards with accuracy. 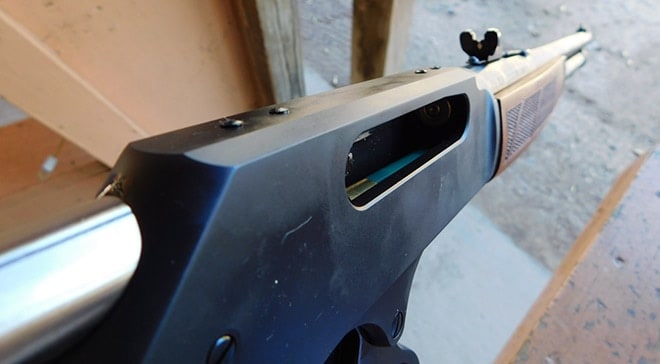 Right out of the box, I had failures to extract using Remington Slugs and Monarch brand PPU No. 9 field loads. It was solved completely with a good cleaning of the breech face, extractor, and the bore. (Photo: Terril Herbert)

Though the spray of birdshot is somewhat limited in range, twenty-five yards is quite good for most pest control and small game hunting unless you are living in the open country. Buckshot loads, like the Federal 000 load, has legitimized the 410 as a self-defense tool and it leaves a nastier impact on the target than it does the shoulder. It isn’t a 12 gauge, but it is easier to shoot and handle. 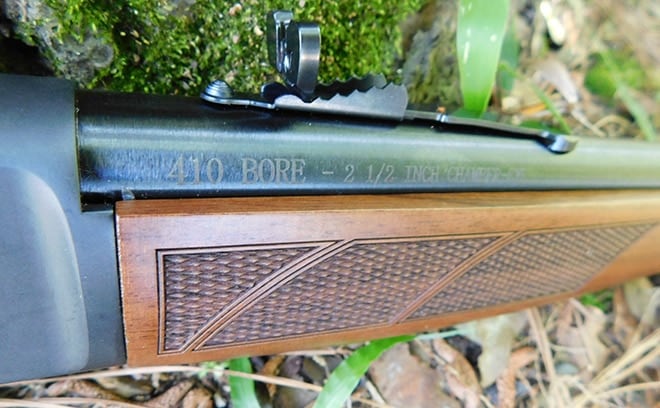 The Henry 410 carbine can only use 2.5 inch or shorter shells. The latest and greatest 3 inch shells won’t fit. But there are plenty of potent 2.5 inch options out there. (Photo: Terril Herbert)

In terms of looks and features, there are no real complaints and I especially appreciate the handiness of the little shotgun along with a good five-shot capacity, not to mention the inclusion of sling studs—something that should be on more Henrys.

But overall, throughout the testing my biggest complaint/question was: Why take this over a 410 pump that is probably faster to reload and less expensive? Once all was said and done, I do have an answer. 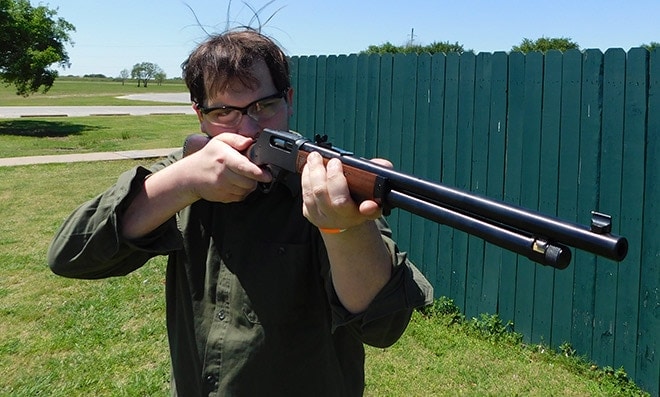 With the craftsmanship I expect from Henry, you are paying for the quality with this gun. (Photo: Terril Herbert)

Indeed, you are paying for Henry’s fit, finish, and craftsmanship, with an MSRP of $850 and dealer prices $100-200 lower than this. Even still, the Henry 410 is high priced for such a small-bore gun. But when was the last time you saw a good 410 pump? I certainly never have. When I first thought of getting a 410, I thought of getting one of the many single-shot shotguns that flood the market. They are very inexpensive and easy to use and are everywhere—410 pumps not so much.

If you are in search of a light-kicking home defender, a pleasant yet fast rabbit slayer, or an unintimidating deer gun, the 410 Henry Lever Action might be a good fit.