Testing the Henry Repeating Arms Big Boy Steel rifle, chambered in .44 Magnum, was a treat as it always is to fire a solid, American-made rifle. In the context of current events, the test also inspired some observations on the state of the industry and Henry’s standing in it.

The Henry Big Boy Steel series has blued finish on the brand’s classic lever-action platform, with a round barrel. Four calibers — .41 Mag, .44 Mag, .45 Colt, and .357 Mag—are offered in a 20-inch barrel rifle with a traditional loop lever, or 16.5-inch barrel carbine with a large loop. 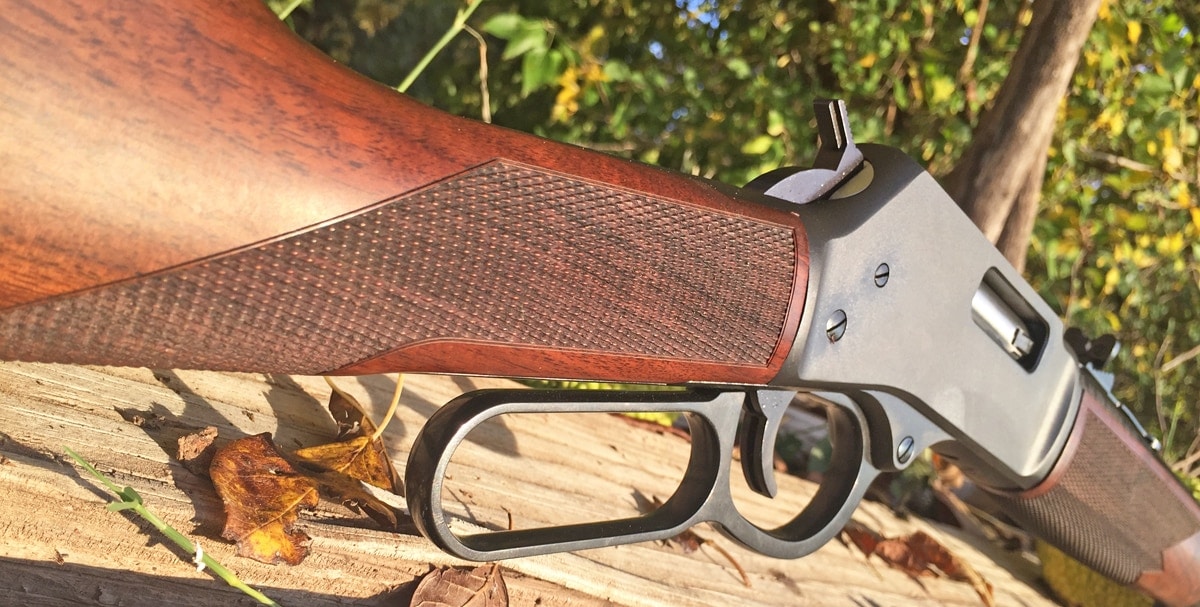 It may not be shiny like many of Henry’s other offerings, but this is one handsome rifle. Bold checkering highlights the stock as well as providing some grip. There were a few imperfections in the sample rifle in this test, where a few “checkers” appear to have had the tops rubbed off, and the light, unstained wood peeks through. It’s a minor defect and only visible upon close inspection.

Firing this big-bore rifle is both similar, and very different, from operating my other Henry Big Boy, a .357 Magnum carbine. Loading, sighting, and their identical 14-inch length of pull are known territory. But recoil is a different story. At seven pounds, the rifle weighs about half a pound more than its smaller counterpart, and like it, gives a solid feel that’s not hard to carry around. But blowback from the larger .44 round is substantial compared to the .38 or .357. This is a rifle sure to please those who like the power of a big kick.

Ammo in .44 caliber is neither cheap nor common at the local Walmart, so our test was limited to stock on hand. Federal’s 180-grain JHP box has a warning, “accurate only in revolvers,” so it’s no surprise that it delivered the least tight group; 2.75 inches at 25 yards. Winchester’s jacketed soft point 240 grain ammo produced a better five-shot cluster of slightly more than 2.0 inches. All shots were fired from a supported bench rest position with open sights. Though we weren’t set up with a scope, results would surely be even better with one. 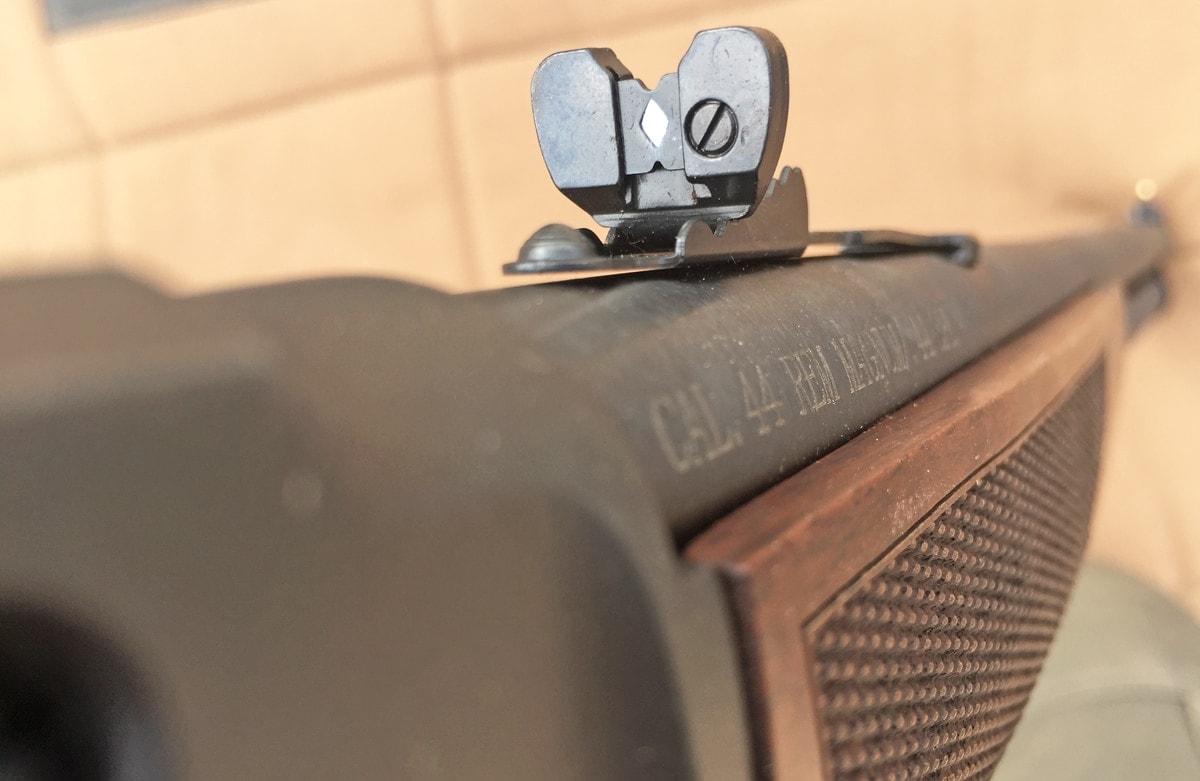 Henry’s adjustable, semi-buckhorn rear sight is removable if it gets in the way of a scope. (Photo: Team HB)

In the Henry single-stage trigger, there is a slight inconsistency. When shooting slow and methodically, for precision, the trigger seems to alternate between a very crisp break and a slight roll – only about 1/16 of an inch – from one shot to the next.  It’s a minor annoyance and one that many shooters wouldn’t notice, nor would I in field conditions.  It’s not a deal-breaker.

After an initial firing session of 30 rounds, I felt some motion in the stock. Inspection revealed the tang screw had worked itself slightly loose.  A little tightening fixed the issue. This is my third Henry rifle to experience, and this issue is uncharacteristic of the brand. It is worth noting, though, so screws can be checked on a regular basis. A bit of Loctite may be in order to prevent this problem on this or any similar rifle.

While the Big Boy .44 is not a precision rifle, this caliber delivers a wallop that’s more than adequate for big game at relatively close distances, and simply a lot of fun target shooting. Its working-gun finish means it’s not too fancy to get dirty, and not so flashy as to be a detriment to stalking an animal. Especially fitted with a magnifying scope, it’s a practical, enjoyable field gun. MSRP is $850, with real prices around $650-700. 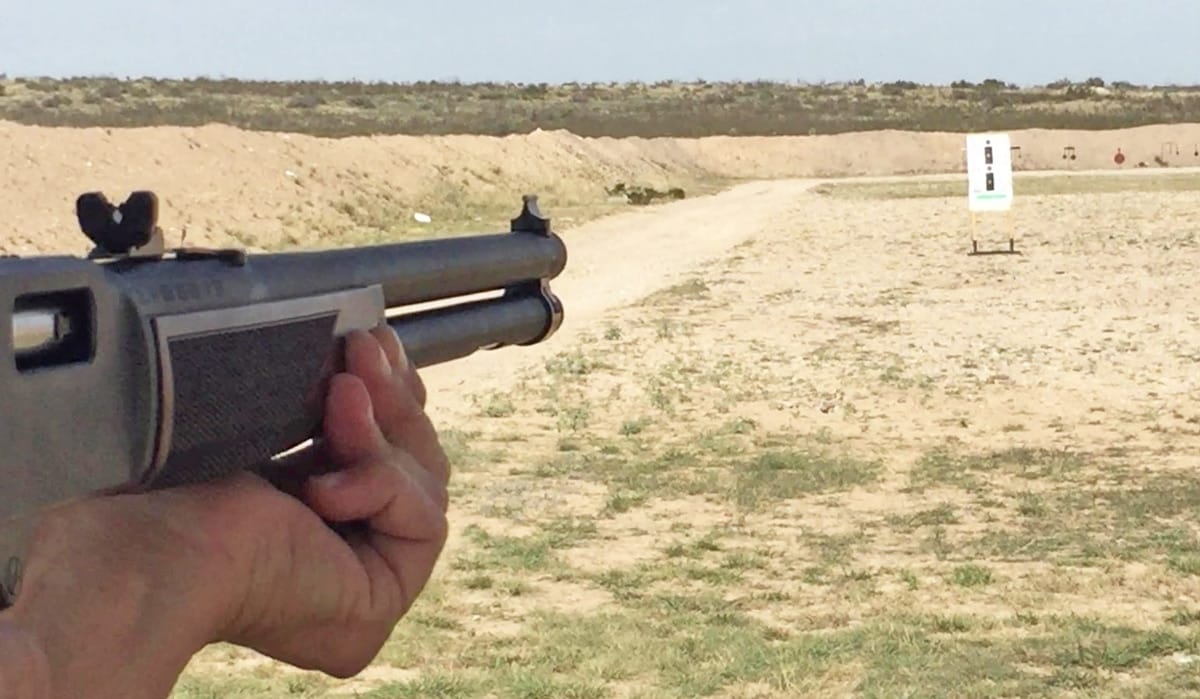 Photographing this simple but beautiful rifle, nestled in fall leaves, it occurred to me that the Henry Repeating Arms brand seems much more mature than a gun maker that just celebrated its 20th birthday — a relative upstart in the firearms arena. Yet, the brand is already iconic and has a sterling reputation. Why? I thumbed through my mental rolodex of Henry rifles I’ve known, and people I’ve known who love these rifles.  These are the conclusions of that pondering:

Memories. With the exception of their .22 survival gun, Henry has clung to the classic lever action repeater or single shot, bolt or pump actions that evoke memories of long-eared wool caps and felt pack boots warming up by the fire at hunting camp. They are the ballistic version of comfort food, lending a sense of reassurance that the heritage that inspired them is still alive.

Quality. The brand is known for its dependability and customer service – qualities usually associated only with luxury products in the modern market. 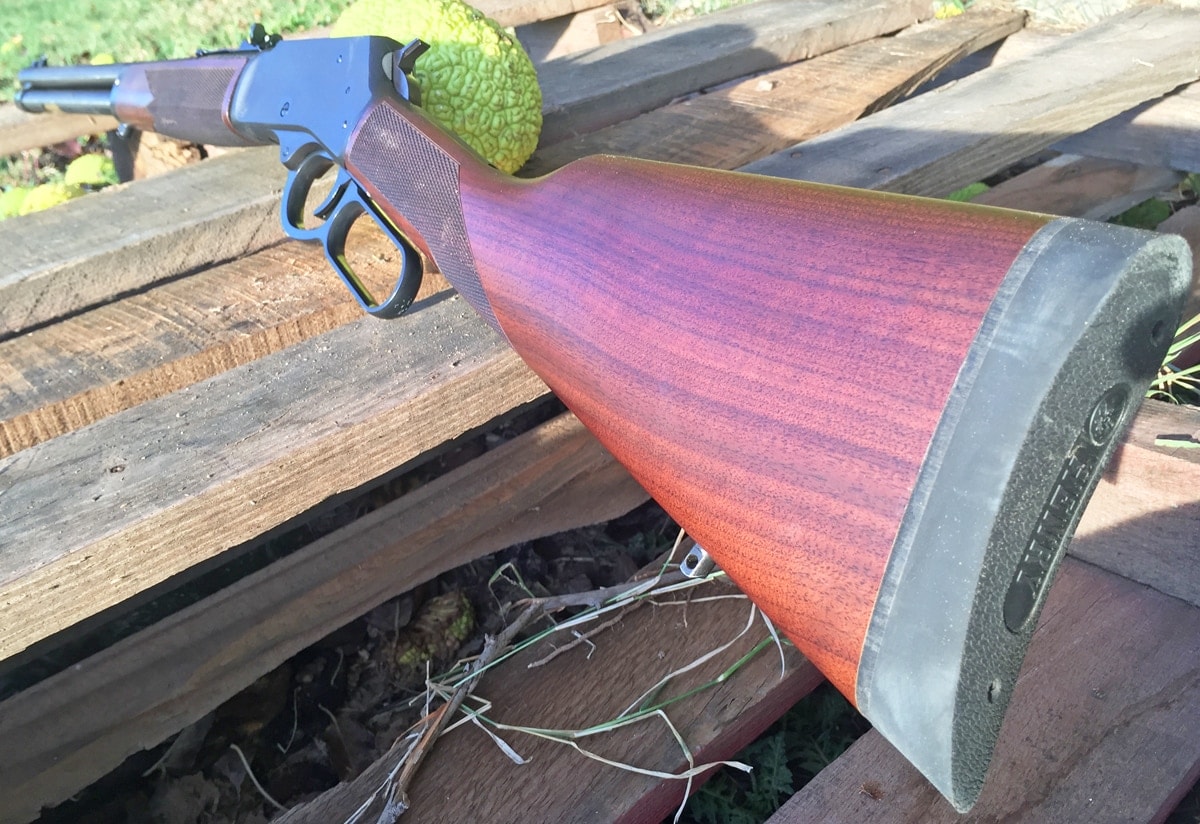 The Henry Big Boy has a walnut stock and generous buttpad, which help make this a practical rifle. (Photo: Team HB)

Personalized treatment. Want a rifle that honors your profession or company, or celebrates a career of outstanding service?  Henry keeps a pulse on American pride, and makes several lines of custom-engraved receivers honoring, for example, first responders. There are other rifles commemorating historical events, and customized engraving is offered as well. The engraving work is top-shelf, making the guns an honor to give or receive.

American pride. I asked the Henry company rep why the company still does business in a place that’s known for its unwelcome stance on firearms – the state of New Jersey. He replied that President/Owner Anthony Imperato is serious about honoring and taking care of the plant’s original employees, for some of whom working at Henry is a family legacy. The company also has a plant in friendlier Wisconsin, where the Big Boy 44 in this report was made. Henry’s record of supporting charitable causes is perhaps unmatched in the industry when compared with other gun companies, especially ones less than 50 years old. 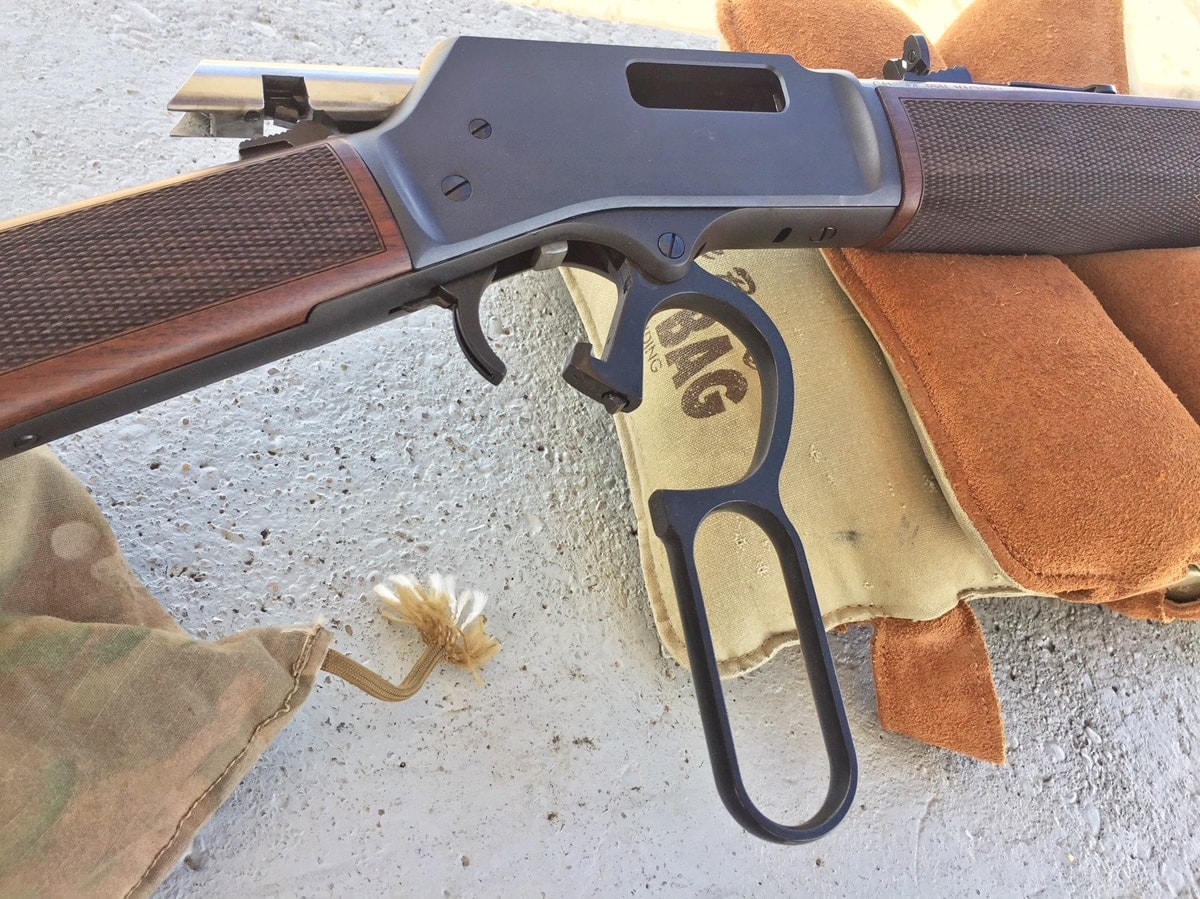 Marching to their own drum. “Will I see you at SHOT Show this year?” I asked the company rep. His reply was no, we don’t do that. It takes a certain kind of moxie for a company to not feel like the big trade shows are a must.  But Henry has staked and maintains its claim on a niche that doesn’t require rubbing elbows with competitors and media to stay relevant.

From the outside at least, it appears the company doesn’t fret about the mercurial nature of the firearms industry. It just keeps cranking out firearms that owners are proud of, and that are unapologetically American. It’s obvious I’m not the only one who thinks that’s a wise, attractive way to do business.