I’ll admit to a preference for single action .45 ACPs.  I’ve always been enamored with the 1911.  But there are other options, and some of them are worthy of a second look, even for those of us who feel, in our guts, that we’d rather be carrying something originally designed by John Moses Browning.

And the HK USP Tactical is one of those guns that might make a dedicated 1911 fan change his mind.  And it couldn’t be any more different than the venerable .45.  The HK Universal Self Loading Pistol sheds the classic lines and aesthetics of the 1911 and goes straight for functional form.  And it has been in service now for 20 years.

The USP is no lightweight.  The gun weighs almost 2 pounds and comes in at 8 1/2 inches.  The USP has a polymer frame and a nitro-carburized steel slide that HK calls its “Hostile Environment” finish.  The tactical version has a threaded barrel and high profile target sights that are meant to clear the top of a suppressor without any adjustment.

The safety on the side has three functions.  Safe is up, fire is the middle position, and the lever also acts as a decocker if it is depressed beyond the fire position.

The trigger break on the USP is excellent.  The double action pull is close to 12 pounds, while the single action pull breaks closer to 5 pounds.  The match grade trigger has an adjustable trigger stop.  The trigger guard is over-sized a bit, so shooters with gloves can still easily fire the gun.

The ambidextrous magazine release lever extends below the trigger guard.  It is not a button, but an actual lever, but very easy to use.  The USP comes with two 12-round magazines with flat floor plates, but 10-round magazines are available, also, for those of you who have to have them. 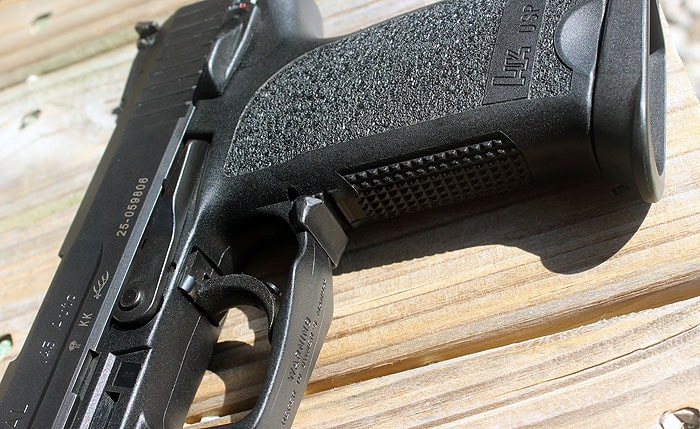 This round count is noticeable in the width of the grip.  A 1911 has frame and grips over the single stack magazine, and it is still sizable.  The USP’s grip feels boxy, owing to the extra rounds in the magazine.  Shooters with small hands may not appreciate the grip’s girth, but all of the controls are very easily accessible.

HK uses “universal mounting grooves” for installing lights and lasers.  Those who want more options, like all of the picatinny accessories that dominate the market these days, HK sells an adapter. 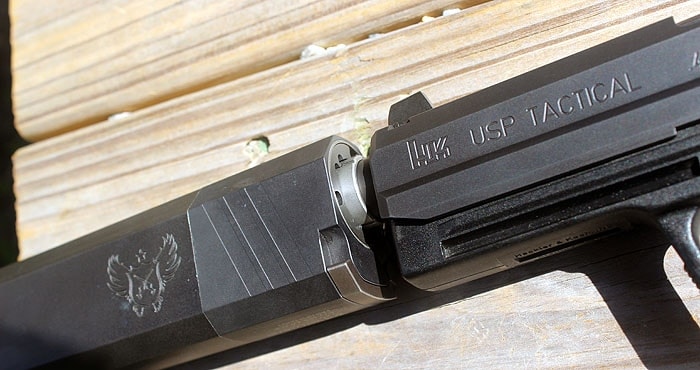 There is a misconception that the USP was developed as a civilian version of the Mark 23, but it wasn’t.  The two were developed concurrently, and the USP actually went through much of the same testing that the Mark 23 did before Mark 23 was adopted by the United States Special Operations Command (USSOCOM) in the 1990s.

Because we had a .45 ACP with a threaded barrel, we broke out the Osprey.  Silencerco’s unique design deviates from the rounded tubes of most silencers.  The large rectangular tube is even better for the ergonomics of the gun, as it more closely matches the profile of the slide itself.  And it is still loud, though nowhere near as loud as a naked USP.

The .45 ACP is a slow round, so you don’t have the super high crack associated with hypersonic rounds.  But I’d still recommend wearing hearing protection.  The Osprey sells for around $850.

Shooting with the USP

I have no complaints about the way the USP shoots, at all.  The target sights aren’t as fast as three dots, but they’re damn accurate.  With the silencer off, the USP is easier to shoot, aim, draw and use.  That seems obvious enough.  Accuracy is superb, even as far out as 75 yards.  We had some bowling pins set up at that distance, and it took very little effort to knock them down with the USP, free-handed. 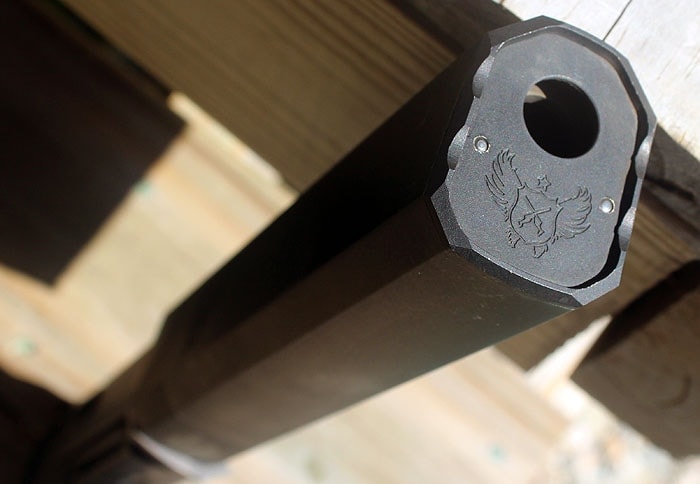 Closer in, the groups tighten up to single ragged holes.  The USP is one of those rare guns that is fast enough for defensive shooting, and accurate enough for high levels of precision.

It is a big gun.  This fits its duty role nicely, but it isn’t going to disappear as easily as a 1911 even.  But it isn’t meant for concealed carry.  It would be better in a strong side hip holster, or a drop leg rig.

I’ve shot this gun on and off now for more than a year.  It feels very natural to me now, even with its larger frame.  The only thing that I’m not used to is the sound of the HK’s springs.  It is a springy gun.   But that’s it.  Everything else feels very natural.  And it makes for an ideal platform for use with the Osprey.

The USP Tactical has an MSRP of $1,352.  That’s a real hindrance these days.  When the USP was released back in the early 1990s, polymer framed tactical pistols were not as common.  Now they are.  Both Beretta and FN are making guns that compete directly with the HK USP, and cost less.  And there are any number of options for half the price. 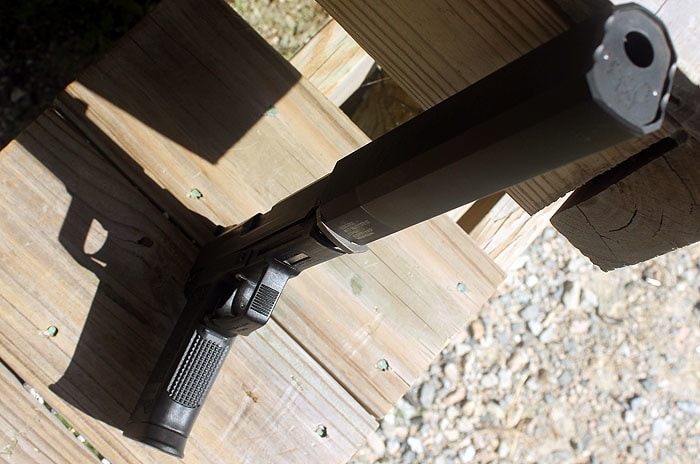 But let’s give credit to HK for pioneering the use of polymer.  They were the first to gamble on polymer, and continued to lead the way with the USP.  And the guns don’t quit.  They can take any abuse imaginable and continue to spit out empties.