SHOT Show is always an opportunity to scope out what’s new and newsworthy in the industry and this January’s show was no different. The Springfield Range Officer was one of the highlights of my trip and while I walked away knowing I had to review the RO (as well as have one in my life) I also left with the nagging feeling that I would be reviewing a different handgun I saw on range day in the coming months.

No, it wasn’t another shiny 1911. It was a little sub-compact 9mm from a company that hardly anyone knows called the Honor Guard pistol 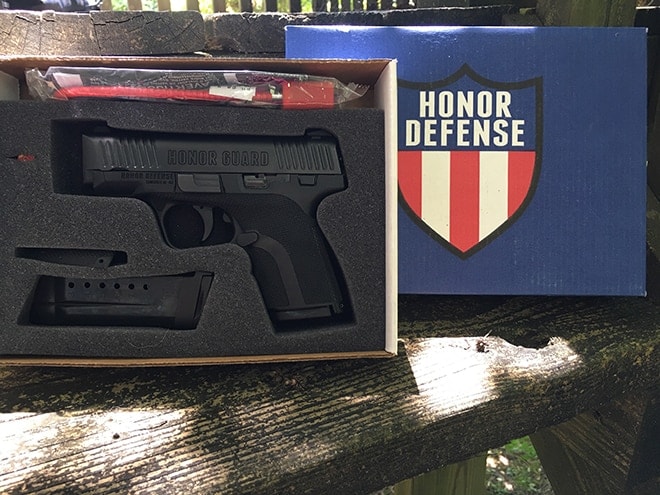 Honor Defense hit the market last year touting their Honor Guard pistol as one of the most engineered and researched concealed carry pistols on the market. Their booth at the range was nestled among the rows of smaller gun manufacturers. I found Gary Ramey, president of the company, animatedly explaining the handgun to anyone that stopped to take a look. As I meandered up to the firing line, I caught my first glimpse of the Honor Guard.

I’ll admit that I was leery at first. What sets this apart from any other polymer semi-auto? As I loaded a round in the chamber and popped off my first shot, I realized just how deceiving first impressions can be. 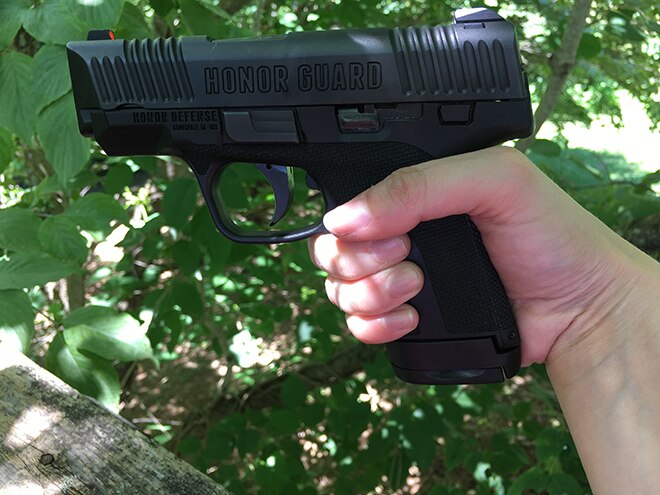 The Honor Guard’s size and profile are reminiscent of its competitor, the S&W Shield. (Photo: Jacki Billings)

Resembling the Smith & Wesson Shield on the outside with innards reminiscent of the Sig P320, the Honor Guard marries form with function. Chambered in 9mm, this semi-auto features a steel slide set on a polymer frame with a 3.2-inch barrel. Weighing 22 ounces, the Honor Guard is light enough to carry but heavy enough to counteract any recoil.

On my multiple trips to the range I blew through several hundred rounds of ammo- both FMJ, JHP, and +P- but still walked away with arm muscles intact. The dual recoil springs certainly did their job in cutting down the amount of jump to the handgun with each shot. Even rapid firing, the gun remained in place. 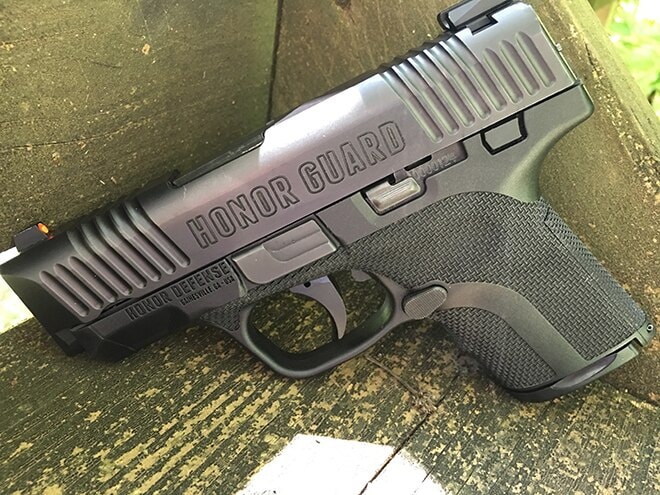 Dual recoil springs can only do so much for that jump, which is why a proper grip is imperative for control. The Honor Guard’s polymer frame and textured grip are aggressive and provide better contact than others I’ve experienced. When I first grabbed the Honor Guard, I was sure the texture would eat at my hands, taking off skin by the time I was done shooting. To my surprise, it was quite the opposite. After three mags in a row, my hands were fine, my shots were on target and I was happy as a lark.

Price point on the Honor Guard hovers around the $499 mark, directly competing with Springfield’s XD-S, Smith & Wesson’s Shield and Ruger’s LC9. While I think the pistol holds its own alongside these venerable opponents, the price tag may run off more budget conscious consumers. 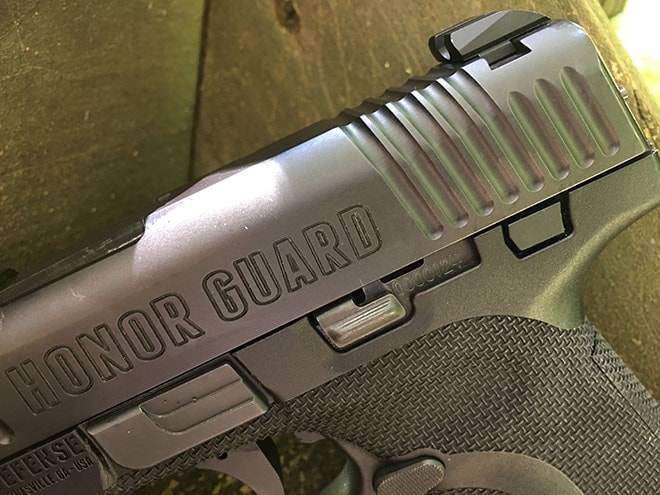 Serrations on the slide allow for greater gripping and ripping. (Photo: Jacki Billings)

The basics on this gun are sweet enough to sell me on it; however its perks ensnared me in its seductive trap.

Keeping with that aggressive texture theme, serrations on the slide are constructed to give ample ability to grip and rip. Whether you prefer the overhanded rack or the two fingered pull, the serrations give plenty of contact to both without snagging clothes.

While we’re on the topic of the slide, even without serrations it moves smoothly against the frame. Usually, I anticipate a little resistance out of the box until the gun is thoroughly broken in. Not the case with the Honor Guard. I found it took little to no strength to lock it back on my first attempt right out of the box. 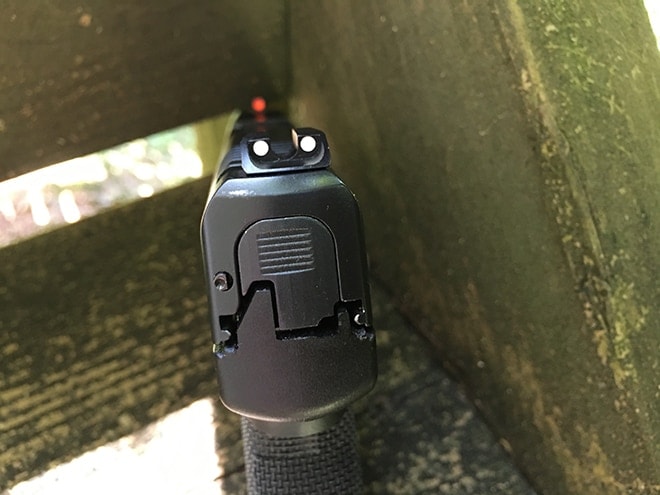 Additionally, releasing it, either through the slide release button or manually, is free of difficulty. The button is extremely responsive, immediately slamming the slide into place. My only contention here is that the gun came to me excessively oily and therefore my hand slipped off when manually releasing the slide. This was rectified with a quick towel-down.

Though this pistol is a single-stack, it maintains enough real estate for a solid grip. If you find your gorilla hands struggling, Honor Defense does include an extended 8-round magazine, in addition to their 7-round flush, for more to grab. Pair that with interchangeable backstraps and even the largest of shooters can find space on this slim 9mm. 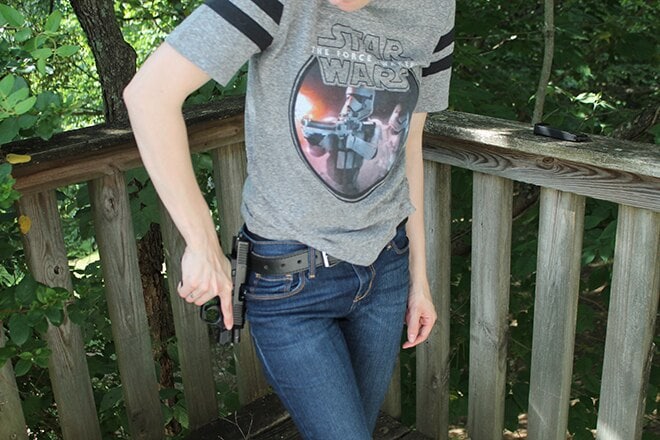 The sights can be used to forcibly manipulate the slide one handed when the other hand is occupied or unable to assist. (Photo: Jacki Billings)

The sights effectively round out the bonus features and elevate the cool factor on this gun. Out of the box, the Honor Guard features a large, orange front sight and white dots in the rear. The contrast of colors makes for quick sight acquisition, which mean faster shots. Rounded and snag-free there’s no worries of unintentional catching on the draw. On the flip side the sights are constructed in such a way that, with the right amount of force and angle, they can be used to rack the slide one handed. 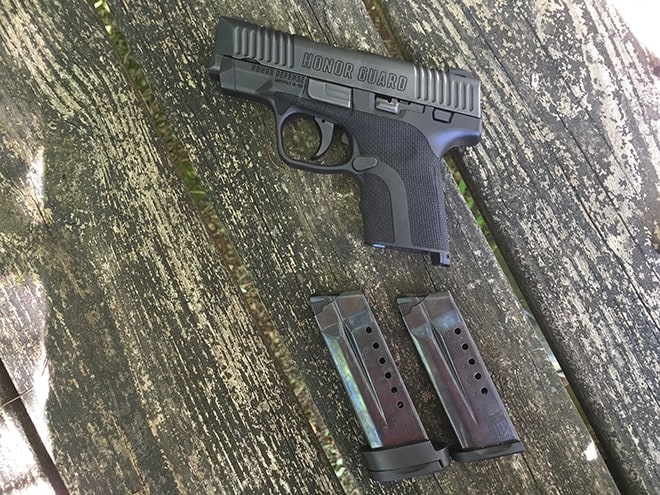 The pistol comes with a 7 round mag and 8 round mag. (Photo: Jacki Billings)

Concealed carry is the word du jour these days. While actual game-changing, concealment pistols are like diamonds in the rough, Honor Defense hit this one out of the park.

I’m still waiting on a kydex IWB rig to do a full assessment and review on the concealed carry aspect of the Honor Guard; but in the meantime, I grabbed an old standby out of my big box of holsters—the Can Can Hip Hugger. 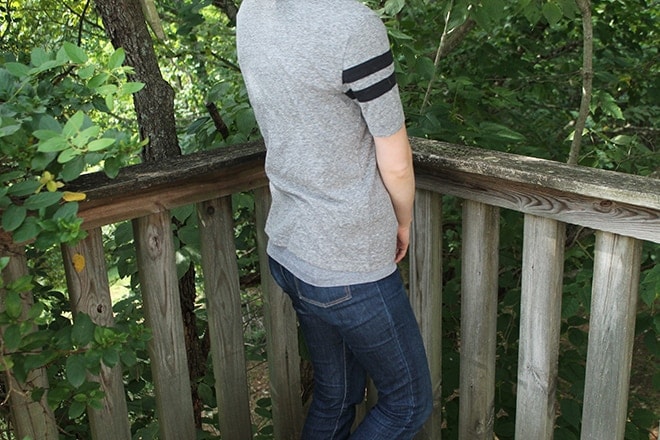 Concealed in a Can Can Hip Hugger, the handgun conceals well despite the author wearing skinny jeans and a tighter t-shirt. (Photo: Jacki Billings)

The Hip Hugger is a belly band style holster that features four handgun slots and two mag spots for deep concealment. Since it’s a fabric holster, any gun will fit. I popped the Honor Guard into the behind-the-hip position first and immediately noted that the single stack pistol melted into my side. I was sporting my nerdiest Star Wars shirt, which admittedly came from the kid’s section and therefore falls on the tighter side. The Honor Guard and Can Can combo were not fazed by the kiddie tee. Even while bending, moving and frolicking alongside my kids, the Honor Guard never printed or protruded. 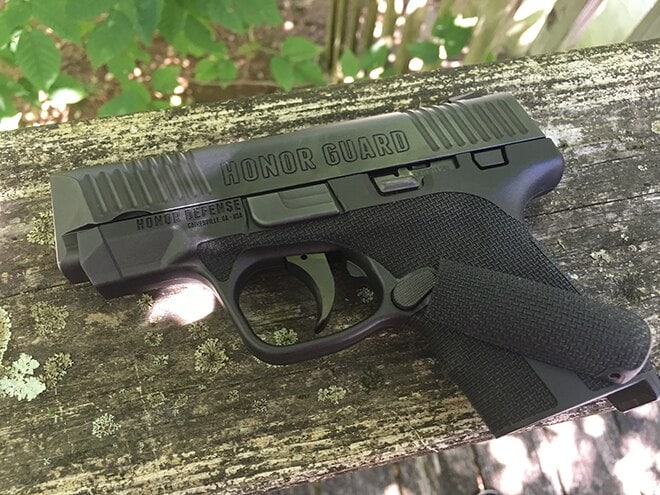 A large backstrap came with pre-installed on the firearm, but the author’s tiny hands required the installation of the smaller size. (Photo: Jacki Billings)

It’s not often I find myself giddy about a gun, but the Honor Guard seems to break all my preconceived notions. The pistol is a marvel, promoting the best the concealed carry industry has to offer while remaining true to functionality.

The combination of price, durability and functionality puts Honor Defense’s Honor Guard near the top of my list of favorite sub-compacts.