We’ve been waiting for the chance to test-drive the Tavor for a long time now.  They’ve been in use overseas, but hard to come by in America.  But IWI had the foresight to build a factory in Harrisburg, Pennsylvania.  Now they’re putting together American made Tavors, and the guns are shipping.

The word so far?  The Tavor rocks.

The 5.56 Tavor comes with a 30 round magazine, but will accept any standard AR magazine (though longer magazines are easier to manipulate).  The 16.5-inch barrel is cold hammer forged and chrome lined.  The bullpup design offers the benefit of the rifle length barrel in an incredibly compact 26-inch gun.  The top has a full picatiny rail.  Empty, the Tavor weighs in at 7.9 pounds, not light, but not bad. 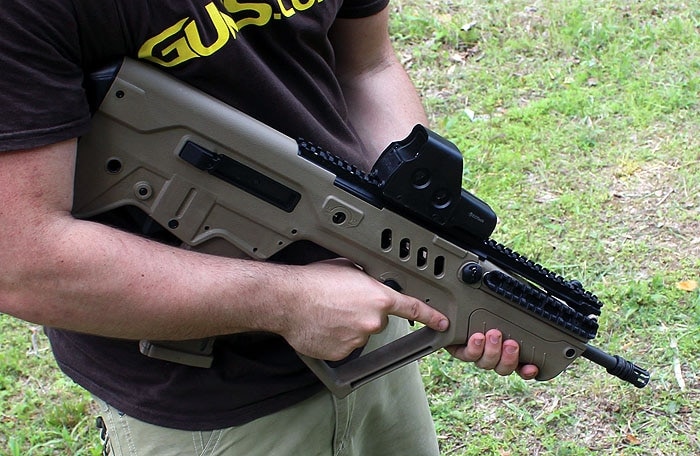 One of the most notable design features is the reliance on polymer.  The frame of the gun is wide, to keep the polymer off of the steel inside, which gets hot.  But the polymer stays cool.  Just avoid the exposed metal.

That ambidexterity extends to almost all of the gun, including the built in QD sling mounts. 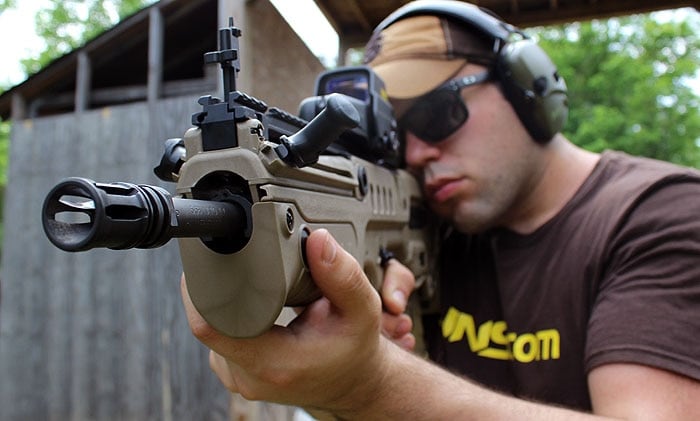 Break down on the Tavor is easy, and it comes apart into easily serviceable groups.  And all of the Tavor parts, across all of the models, are interchangeable and mil-spec. 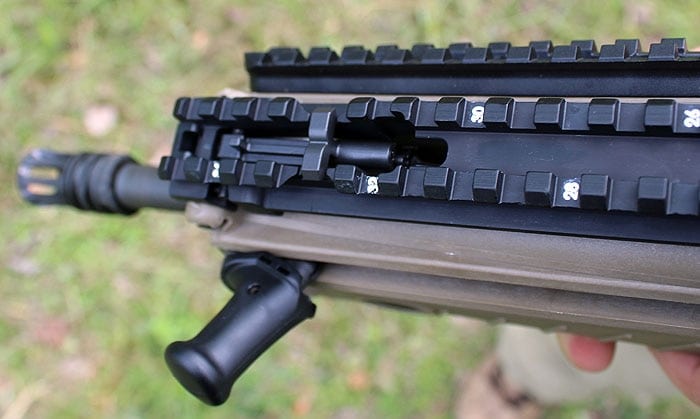 The Tavor’s sights are interesting.  The front and rear post are integrated into the top rail.  Though they look thin, they’re not.  The hinges are solid and the steel posts are robust.  The rear isn’t adjustable, but the front is easily raised and lowered.  Together, the sights are at the perfect height to co-witness with most red dots.

The Tavor’s front post has a tritium insert, and glows nicely.  Both flip up easily.  The height of the posts makes for a very comfortable cheek weld.  And there’s nothing obtrusive to come back and bite your nose when the recoil from the 5.56 hits. 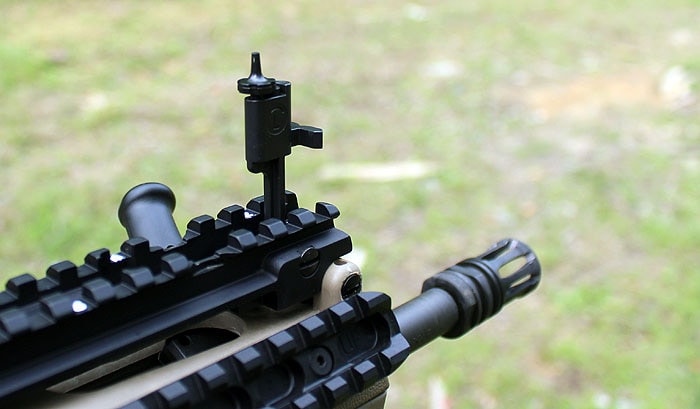 We had a hell of a time getting the Tavor sighted in.  We had a great vice, mounted on a firm shooting bench, and it still took a while. When we did get the Eotech aligned with the irons, the Tavor proved to be exceptional.

We were limited to about 100 yards on the range, but the Tavor could handle everything.  This is exactly as it should be, of course.  The compact design of the bullpup makes it feel small, but the 16-inch barrel is more than capable of medium range accuracy. 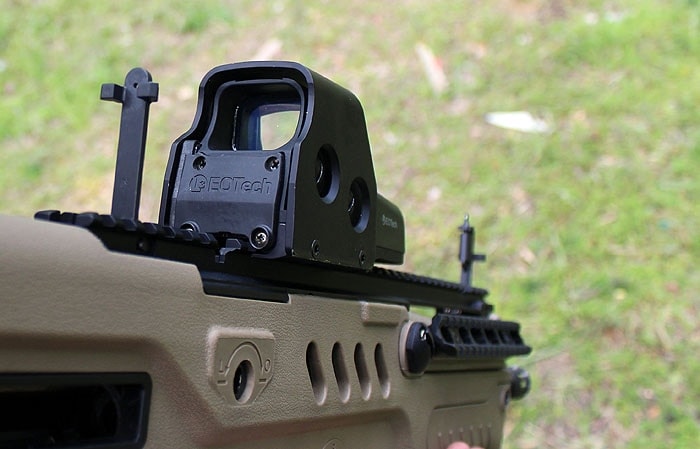 And the maneuverability is amazing.  I’ve grown accustomed to the length of carbines like the M4 and the AK, but this is the shortest 5.56 I’ve ever run.  And it feels more like a pistol with a stock, like a true short barreled rifle than a carbine, even.

And the recoil, which is minimal from the 5.56 anyways, is hardly noticeable in the Tavor.  The gun moves between shots, and that makes shooting while moving even more of a challenge (as the video below clearly demonstrates).  But the hand placement on  the forend is much closer to the muzzle, so there is more control of the recoil energy.  And follow up shots happen very quickly.

Fans of Magpul will be right at home with the IWI magazine.  The design is very similar.  The two are so similar, in fact, that we aren’t sure that Magpul isn’t making the IWI magazines.  We’re checking on that.  But they’re solid.  They work flawlessly.  The window is handy (though hard to see when it is tucked under your arm).

The Tavor’s magazine holds 30 rounds — standard.  And that may be the practical limit, considering the compact size of the gun.  The 30 round magazine extends just a bit below the stock, but not enough to be really obtrusive. 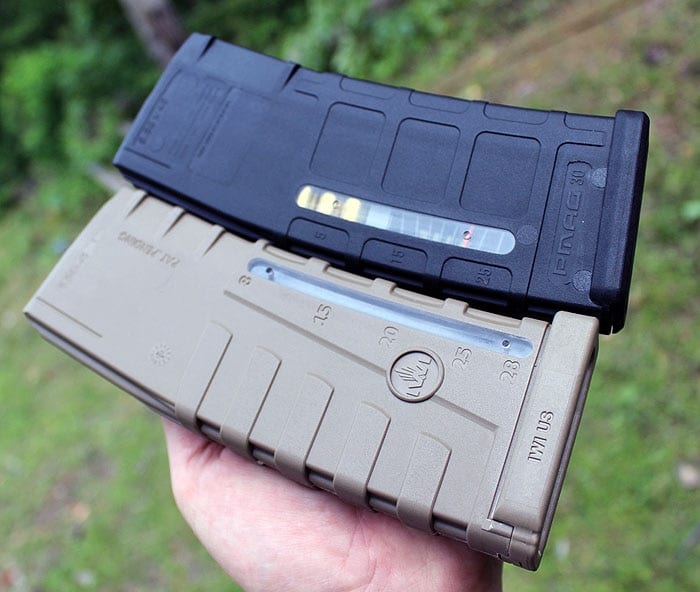 And the Tavor’s bolt hold-open is just behind the magazine well.  This is the hardest feature to use on the entire gun, but it gets better with practice.  The hold open is an odd piece of polymer, a lever of sorts, that rocks into place.  It is easier to drop the bolt than it is to engage in the open position.

But magazine drops are amazing on the Tavor.  The mag release is right behind the pistol grip.  It is a paddle that can be moved with the shooting hand without letting go of the grip.  So while your left hand is reaching for a new magazine, your right hand can drop the magazine.  It is fast, and easy to stay on the trigger and on target.

The IWI Tavor sells for right at $2,000.  That’s not bad.  Look at the gun in this line up.  On the right, the Stag 3G.  On the left, the Kel-Tec KSG.  Right next to the Tavor is a Colt AR-15 with a Troy M7 upper.  It has a 7.5 inch barrel.  There is less than 2 inches of difference between the short barreled Colt and the Tavor (and that is with the stock collapsed).  Yet the Tavor has 9 inches of additional barrel.

The Colt, though, is automatic.  So it has that going for it. 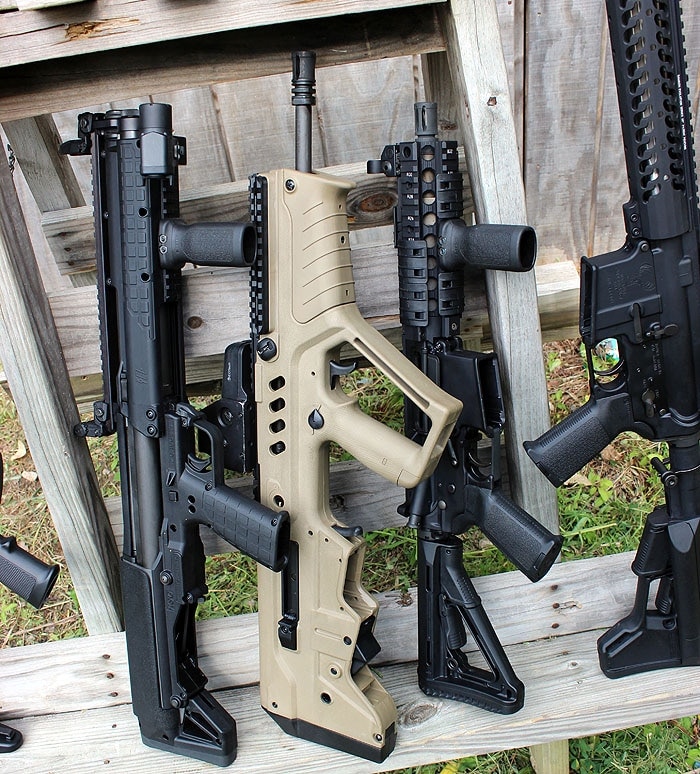 The Tavor looked great on paper.  When I saw them at the SHOT Show this past January, they felt good.  Now, having put close to 500 rounds through it, I like it even more.  Only time will tell if the bullpup configuration will unseat the AR-15.  But the Tavor has a chance.  Check it out, if you haven’t already.  It won’t disappoint.