When HK ceased production of its G3 rifle, numerous poor imitations popped up, which people bought them because, hey, they wanted a G3. And unfortunately they bought something far from the real thing. Eventually it made some people tired to see such a fine design ruined, so they grouped together and put together the finest specimen they could and result was the JLD PTR-91.

Starting in 2002, a new American company started to offer a clone of the very popular Heckler & Koch G3 (HK91) battle rifle, using HK licensed machinery from Portugal. That company was JLD Enterprises and the rifle was the PTR-91. “PTR” was the abbreviation for “Precision Tactical Rifle.” The original company produced the JLD PTR-91 for about four years, but the company has since been superseded by PTR91 Inc. 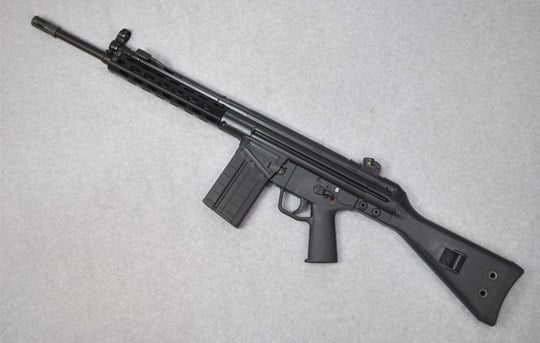 Why tell you about an older version of a gun that is still available new in slightly updated form? Well, because these older guns are still highly regarded and should you find one used you may want to jump on it.

The JLD PTR-91 I shot belongs to a friend and has seen very light use. I think that it was made towards the end of the JLD Enterprises run, sometime in 2005 or 2006.

The JLD PTR-91 uses the HK designed roller-delayed blowback system, which has proven to be very reliable and provides excellent accuracy. One interesting feature of this design is that the inside of the chamber has fluting to allow combusting gases to help dislodge spent cases, a feature that aids in consistent extraction. This leaves some interesting gas markings on the front of spent cases. It doesn’t harm them per se, but it is very identifiable.

The gun was extremely well made with excellent fit and finish in all particulars. One thing that was notable on first exposure was the surface treatment of the exposed metal parts.

In the finishing process, they are first Parkerized and then given a baked-on powder treatment. This results in a hard, matte finish that protects the gun from most normal light use wearing.

All the tolerances were very tight, all operations very smooth and crisp. The stock and front hand guard is made of a tough polymer that felt very comfortable in my hand.

The gun used for this review has the original 18-inch heavy target barrel, which provides stiffness and additional weight. It also came with 20-round magazines, which functioned with no problems. 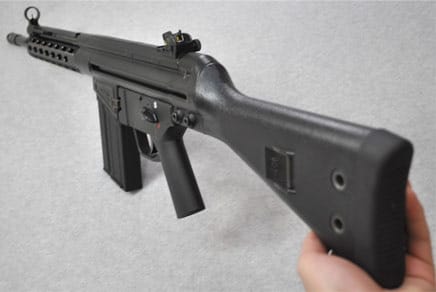 The front sight is a military-style post and ring. The rear sight uses the original HK design, a horizontal ring with different ranges marked.

The closest is 100 meters and is a quick-acquisition V-notch. The others are peep sights that allow for shooting at 200, 300 and 400 meters. An interesting feature is a knurled knob on the rear sight, which is for easy windage adjustment.

The gun was designed for mounting optics, but we shot it with the original sights. It wasn’t half bad.

Accuracy out to 200 yards was as good as I can shoot, but in the hands of a better shooter, I have no doubt it would be fine out to 400 yards with good ammo. Certainly the .308 Winchester, or 7.62 NATO, round is effective out to that range, depending on loading.

The nine-and-change-pound-overall weight of the gun helps to absorb some of the recoil, however, my friend has added a recoil pad to help absorb more. The result was that recoil was noticeable, but not as bad as you would expect from most full-power rifles.

All in all, it is an excellent rifle, with a feeling of solidity and dependability. From what I have read, the current models being produced by PTR91 Inc are as well, but if you come across one of the older models, don’t be afraid to take a chance on it if the price is good.